During the early 1990s, Marvel Comics attempted to boost its Marvel UK to became a successful imprint in the US. A burst of distinctive books resulted, though it was only a few years before the market crashed. Super-Soldiers was one such book, about enhanced British commandos.

When the super-soldiers were inevitably privatized, several allies of their joined. One of those was the over-the-top blaxploitation martial arts master and pimp, the Dragonfly.

The Dragonfly is a super bad cat kung fu master. He invented his own style, which he called G-Jitsu or Gangsta Jitsu, which “combined all the martial arts and street fighting and took it to that other level”.

He was one of the great masters of the late 60s and early 70s, and at one point felt he had no challenge left – he was simply the best, baby.

Dragonfly has effortlessly demonstrated the dreaded Dim Mak death touch. He could slow down his metabolism in order to sleep 20 years as if if sleeping for but a single night.

It is quite probable that he is the master of numerous other abilities. For inspiration see our Remo the Destroyer profile.

Andre LeRoux aka Dragonfly – O.G., pimp, hustler, player and all ’round mack daddy. Undefeated champion street fighter and kung fu fat cat. He was one of the greats of the martial arts scene of the late 1960s and early 1970s.

He’s the man Count Danté was afraid of – he’d whip that punk just for kicks. Damn right, nobody could beat the man – he had no challenge left.

So the Dragonfly just went to sleep for 20 years, using secret techniques to slow down his metabolism.

Back to life, back to reality

Waking up in July of 1993, he was impatient to discover new and worthy opponents, to see the flying cars, the bases on Mars, to be rid of the ghetto. A quick glance at the bleak Bronx streets promptly confirmed, however – that not a damn thing had changed !

He was almost immediately contacted to take part in a HYDRA martial arts tournament. While there (and discovering it was a tournament to the death, which he didn’t like one bit), he met the UK Super-Soldiers, who had infiltrated the place as a spearhead for a S.H.I.E.L.D. assault.

LeRoux joined the UK Super-Soldiers for a brief time. However, this being the UK in the early 1990s they were soon privatized and sold to a corp called Mercy.

Mercy Security was only after the superhumans, so they fired Dragonfly II, along with a few others. LeRoux decided he liked the Big Apple better anyway, and went home.

He hasn’t been seen since.

LeRoux is quite tall, and wears platform shoes for added effect. He projects a strong “cool” air – because he’s such a rad blaxploitation hero stickin’ it to the Man. Are you down with that ?

Confident. Proud. Hard jivin’ mack daddy. Loves to be good lookin’. Can you dig it ?

Dragonfly II is clearly a criminal. He’s into prostitution, drugs and the like. To him this is just the best choice of lifestyle – the best way to get respect, money, sex and recreational drugs. He sees nothing wrong with that, and is generally quite successful since he can muscle in on concurrent operations all by himself.

A monumental egotist, he doesn’t care at all about the consequences on others of his activities. He just cares about supporting his lifestyle.

Proving that his kung fu is better than anyone else’s kung fu is an even greater thrill than all of the money and girls. If he sees a good occasion for interesting fights, he doesn’t care if he works as a crime fighter, a criminal or a Smurf.

If proving how cool he is involves saving children and nuns from a burning wreck, that’s fine. If he has to leave his small criminal empire behind, he doesn’t care.

He has no loyalty toward people. He knows that, being the best on the mean streets, he’ll always be able to rebuild a prostitution/drugs ring to support his lifestyle – and his pride at being the baddest badass brother there is.

“That’s why they call me Dragonfly, cos I’m the dragon, the baddest martial artist, and I’m the fly , a super-bad dude.”

Drawbacks:
MIA to lookin’ like a damn cool cat.

Some of the Skills are speculative, given his brief ’on-screen’ career. 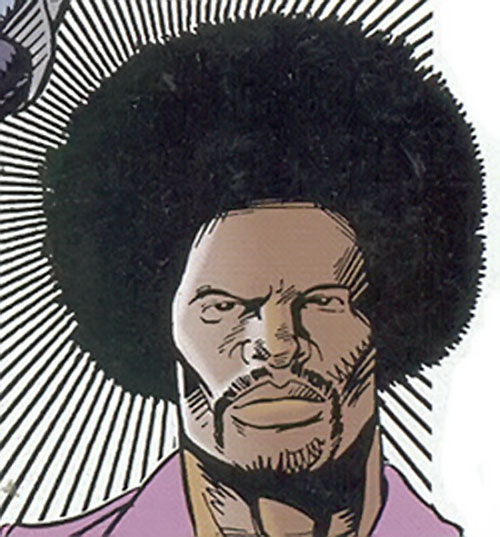