The 1993 Marvel Annuals all introduced a new character, with some fanfare and — because 1993 — a trading card. It generally fell flat, though.

This Dreamkiller is the one who was in that Darkhawk Annual. He’s not remarkable but heh, I could do a character writeup with just one cheap comic book.

Alex Tennyson has always been an avid student of the occult. He dreamt of sharing the destiny of men such as Doctor Strange and Baron Mordo. This obsession consumed him, and led to the destruction of his marriage.

He worked as a manager of a small mystic arts supply store. But in practice he was little but a somewhat crazed half-recluse.

The crime lord Philippe Bazin then died. He owned a large occult collection. One of these artefacts, stolen from Bazin’s very grave, turned a man into a powerful monster that was taken down by Ghost Rider (Dan Ketch) and Darkhawk.

Watching the fight on TV, Tennyson swore to find the object. But calls to Bazin’s daughter didn’t go well. However, Tennyson learned that the object had been found where the battle ended. He couldn’t pay what the finder asked, so he murdered the man to take the artefact.

After experiments involving bombarding the object with energy, Tennyson unlocked the power of the Dreamkiller.

Tennyson went after the new husband of his ex-wife. He blamed him for his marriage’s failure, even though Tennyson’s obsession clearly had been the problem. But he couldn’t kill him in front of his son. So Dreamkiller vented his anger on everything in Soho, killing several cops and fighting Darkhawk.

Tennyson is an average, slight guy with dark gray hair and black eyes. He generally wears a cheap suit.

Tennyson is a small, small man. He hates the world and only relishes in occult study. He hopes that magic will bring him untold power and a grand destiny.

He blames others for all his failures. Dreamkiller is his ultimate chance to act like the big bully he’s always wanted to become.

“I am what you are. The shatterer of hope. The destroyer of all that is good. The murderer of prayers, wishes and love. I am… Dreamkiller.”

Sure – he’s very minor. The mystic object could have been stolen from Starman (Jack Knight)’s store. 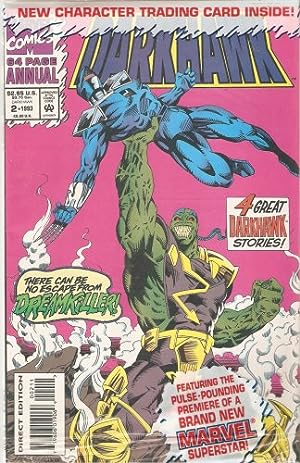