Droog’s levels of strength and durability are unearthly. He could engage the Hulk himself in melee on an equal footing, and keep up even as Hulk grew angry. It is unclear what Droog’s upper limits are – our game stats are conservative. He might even be regenerative.

Not only is Droog absurdly strong and tough, but the creature is also a superb fighter. It’s efficient, fast, cunning and incredibly agile for its mass and odd physiognomy.

Droog (“Friend” in Russian) is a genetically engineered pet. It was designed and grown by the Soviet genius called the Gremlin using the labs at the base of Bitterfrost, in Siberia.

It wasn’t solely intended to keep the Gremlin company. It was also smart and articulate. And it was unbelievably strong, allowing it to serve as bodyguard and occasional enforcer and discipline officer.

In 1975, the Hulk found himself in Bitterfrost, during a SHIELD rescue attempt to recover Glenn Talbot. He was captured for a while, but S.H.I.E.L.D. agent Clay Quartermain busted him free then persuaded him to collaborate.

As they took the Gremlin hostage to get out of Bitterfrost, the Gremlin yelled for help. Droog came in. During the ensuing commotion, the Gremlin fled and the Hulk attacked “the big orange monster” Droog.

Droog soon proved to be a match for the Hulk. The two titans fought for more than 20 minutes, severely damaging the enormous walls and vaults in Bitterfrost. Their fight never ended, since at that point S.H.I.E.L.D. used a special orbital weapon to vaporise Bitterfrost.

The Hulk survived the blast since he was knocked further underground by the deflagration. But Droog was not seen again, even during the subsequent appearances by the Gremlin.

In 2006, Droog was seen in the NYC apartment of Megacephalo.

Though we’d rather consider the book out of continuity, it *is* likely that a creature that could fight it out with the Hulk without apparent damage for 20 minutes survived the destruction of Bitterfrost.

Droog is generally similar to some sort of mutant triceratops. After all, the Gremlin was but a child, and children generally like dinosaurs. 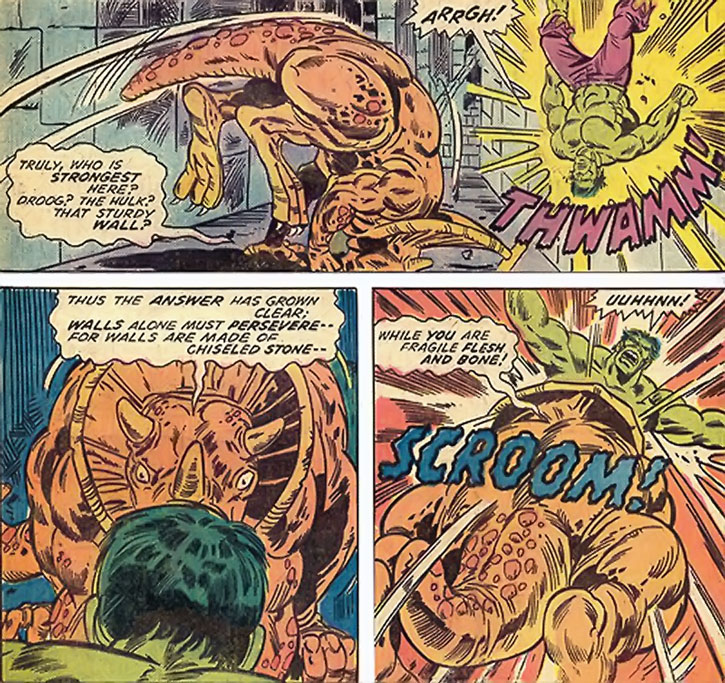 It also had some vaguely canine characteristics.

While Droog seems to be primarily a quadruped, it can rise on its hind legs and use its arms and hands without any problem.

Droog has a faithful, dog-like personality and devotion toward the Gremlin. It fully considered itself to be the Gremlin’s pet, protector and henchman.

It always talks in rhymes. It’s usually just a pair of sentences rhyming with each other, but he will occasionally come up with lengthier and more elaborate poetry.

“Precious master, have no fear ! / Your loving droogi pet is here !”

“Droog is here at your command ! / Who is Droog to reprimand ?”

“Dreams of power, emerald one / Are not much more than dreams and all / Truly, who is the strongest here ? / Droog ? The Hulk ? That sturdy wall ?” (THWAMM ! - throws Hulk against the wall) “Thus the answer has grown clear ; / Walls alone must persevere / For walls are made of chiselled stone / While you are fragile flash and bone !” (SCROOM !)

“Your threats all have a hollow ring ! / Droog does not fear anything !”

Droog appears for but a few pages, so stats are somewhat speculative.