Dropkick has been trained in various martial arts forms ever since he could walk. He knows moves that are supposed to be legendary, lost to time, or both.

Wetware improvements allow him to use his chi  energy on a level that might be otherwise impossible. He can even project blasts of chi energy, though this is not an efficient use of it.

No other martial artist in the Ultraverse has proved to be his match. For instance, Dropkick demonstrated that he was much more skilled than Night Man.

His costume has metal bracers covering most of the wrists and forearms, allowing him to block edged weapons. While he has proven able to block a sword swung at him by a superhumanly strong opponent by catching it between his hands, the bracers are a more reliable defence.

About two things are known about Troy Wilde’s past :

The identity of his abductors/trainers is not known. What is known is that, when he was about 27, he became a mercenary and well-connected player in the troubleshooting business. He was seen as a reliable, smart pro and a highly formidable fighter.

Wilde was the best troubleshooter known to Pete Bazzini, a well-connected man. Bazzini gave Wilde’s number to Lela Cho, the heiress of the Hypersonics society, who had been ousted from her own firm by the mighty Dragon Fang triad.

Wilde found Cho to be an interesting client and person. He almost immediately helped her to escape from Casino, a Dragon Fang assassin. He took her to a secret place behind a pub in London, that served as a meeting point for many mages, ultras and other paranormal types. At the pub, they met and befriended Shadowmage, and a few hours later met and recruited Outrage.

However, Wilde was badly wounded while in London. Both his eyes were destroyed by Casino, who had found them again. He struck a deal that he would work long term for Cho if she had him healed, and enhanced with wetware. He took the name Dropkick, and thus was the Solution born.

Dropkick is still a part of the Solution, and experienced quite a few interesting contracts and adventures with them. He also has become Cho’s lover.

When the series ended, however, he was subtly under the corrupting influence of the alien artefact known as the Vorlexx.

Above is the Vorlexx-influenced costume (with Insta-Change). Next is the first costume (no Insta-Change) and below is early 1990s civilian appearance.

When concentrating for combat, Dropkick will often have his hand burn with chi energy, a bit like Iron Fist.

Dropkick is a calm, experienced and competent troubleshooter and mercenary. He has a wide range of skills and contacts.

He seems to be quite the white knight. He’ll not hesitate to do a freebie for concerned innocents, especially if that involves children. He’s quite sensitive on the subject of mistreated children.

He is the most relaxed and helpful member of The Solution, but will do a good job acting as a macho tough guy when needed for intimidation purposes.

(Smiling sincerely) “No, really ! I’m a pro. I’ve been studying martial arts since I was able to walk.”

The Solution can exist in nearly any supers universe where one can access cybernetics (something like Nuware or Spiral’s Body Shoppe) and some aliens are around. The team is relatively independent from context.

Also, as a mercenary team, they can credibly appear anywhere and work for most everyone. Which is a boon in most less-than-cosmic campaigns.

Bonuses and Limitations:
Energy blast is Fatiguing and has Reduced Range (Range is 03). 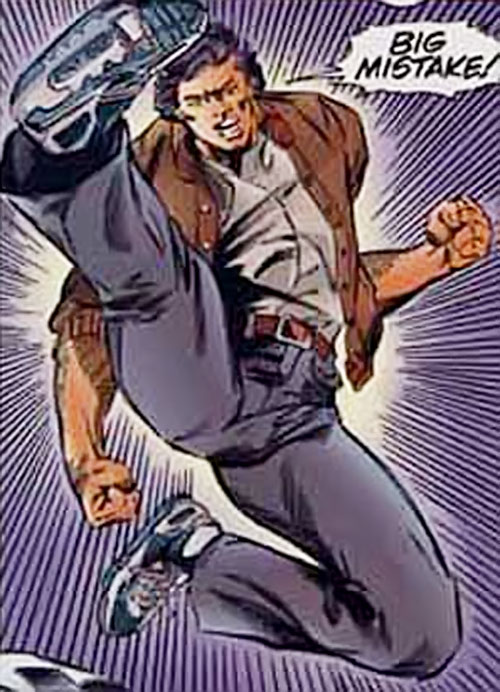