He belongs to the character archetype that D&D calls a paladin  – a holy warrior serving righteous causes. Paladins are subject to stringent ethics, but have some magic powers.

He also draws from some Nordic mythology and imagery, albeit some of the material is older than that used in Marvel’s Thor comics.

Magnir is a huge, broad-shouldered fighter with nigh-superhuman strength. He looks like the sort of man who could punch out a bear or lift an ox.

As a holy warrior and experienced adventurer, he masters many field skills from horse-riding to sword-fighting. He’s an adept military officer, a good singer in the style of his homeland, and has a lot of experience with the paranormal and unusual that he can draw from.

Beyond his strength, his greatest assets might be his exceptional charisma and resolve. He’s a battle-hardened leader who inspires trust and courage, and has unwaveringly faced some truly awful things.

As a paladin of Freyr, Magnir possesses some minor magical edges such as immunity to disease or healing by laying on hands. Our game stats present a streamlined version of the usual AD&D class capabilities.

Borsson usually fights with a longbow and a claymore.

The longbow is an elaborate composite affair in the Elven style. It has an enormous drawn weight, and is usually referred to as a “five-man” bow due to the strength it takes to use.

The sword is a Sunblade, one of the powerful claymores forged and enchanted for elite servants of Freyr. It can shine with pure sunlight, making it a devastating weapon against many forms of undead and creatures of darkness.

Magnir Borsson hails from the large village of Akumæ. His lineage was cursed, with every man born a giant whose size would kill the mother at childbirth. They are known as surly brutes who kidnap and sequester women from other villages. Thus, Magnir was expected to be just one more bad seed.

However his father was killed in a vendetta. As a result, he was more or less adopted by a cousin known as a tanner and storyteller. She raised him right, though many villagers maintained that apples don’t fall far from the tree. 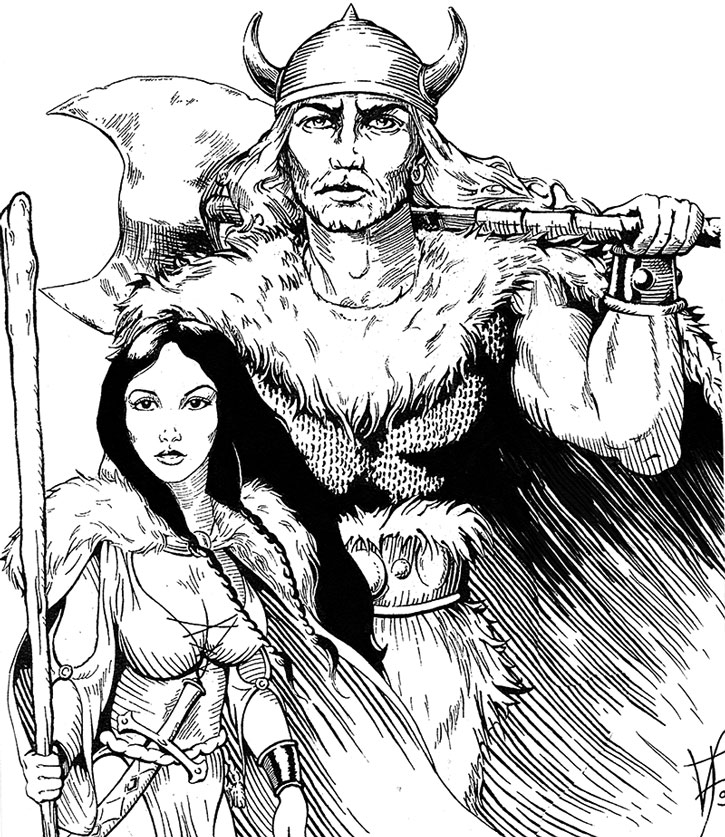 When the priesthood ran him through his coming of age ceremony, Magnir vanished in thin air. At the same time shining, ghostly women briefly appeared at the temple. Though this certainly wasn’t common, the priests knew what to expect.

The youth returned three days later with the signs of a Dawn Knight – such as interlocking tattoos of unicorns on his forearms that looked made of silver. He had been recruited as an agent by the god Freyr — a considerable honour for the community.

A band of Freyr’s people, the Elves, came to Akumæ for Magnir. Then they rode away with the 14-year old. They gave him an education in their ways, further pulling him away from his brutal and predatory roots. To this day his use of the longbow, his way to wield a sword, his way to ride a horse, the way he prepares his trail meals, etc. bear a marked Elven influence.

This all came crashing down a few years later. By then unused to Human meads, he became stinking, roaring drunk at a tavern. As it turned out, he was the worst kind of drunk. Two men died, a girl was raped, the tavern was thrashed.

When Magnir regained consciousness, the Elves were gone, the unicorn motifs were darkened and oxidized, and his paladinhood was lost. 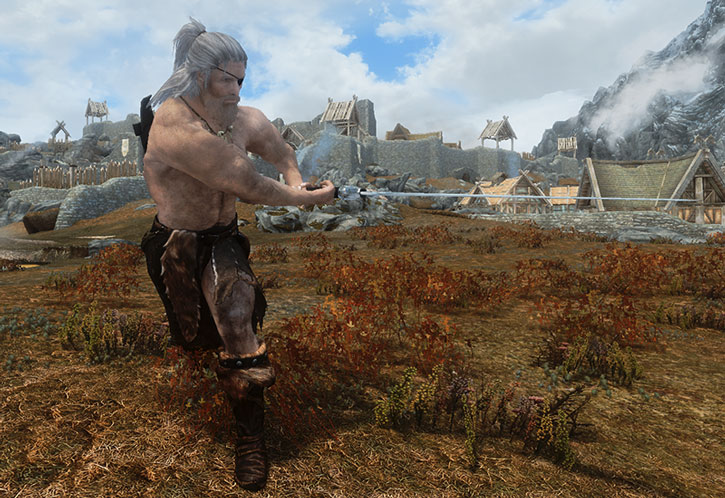 Supplicated, the goddess Freyja agreed to a penitence. The fallen man was to go through years of works to save those souls trapped by the necromancer Frader Martelmort. During this quest, the ex-paladin clashed with cultists of Hel. During these battles he was subjected to their curse, with the left side of his body ageing and nearly dying.

He lost his left eye but narrowly survived the ordeal thanks to the intervention of an half-elf witch named Morwaine, of the Faemir people. Morwaine had scryed that she was fated to live with Magnir Borsson. Magic said that she had no choice in the matter, a situation she was less than pleased about. Magnir was also unenthused.

The not-a-couple soldiered along to the gates of hell, experiencing many adventures over the years. That included clashes with the Faemir who attempted to capture Morwaine to prevent her from living with a Human.

Eventually, using illusions and powerful alchemical fire, Morwaine distracted the hellhound Garm. That lasted long enough for her husband to rush in and bail out with the damned souls, setting them free.

The deed done after a dozen years, Magnir regained his paladinhood. As they were galloping away from Garm, Morwaine and Magnir were grabbed by Valkyries who took them to another world, where Freyr needed one of his agents to act.

In this new place they found the faithful besieged by far more powerful forces of darkness, and resisting as they could. 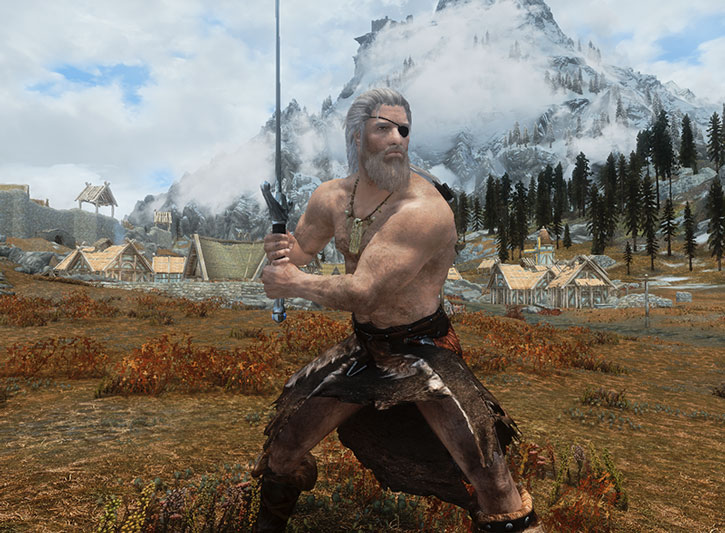 Borsson joined an army of knights, Lannann’s Griffins, who were the main defenders. The war against demons and the undead raged for years, but Magnir survived it all. As he rose in the ranks, Magnir became an associate of the Black Temple. The Temple was a fortified military base run by priests of Freyr.

At the Temple he and Morwaine became friends of the Three, a reputed special operations unit. It was made up of clerics of Freyr – Spherix, Heicure and Nestophidius. When Spherix was rendered comatose after being banished to some sort of hell, Magnir became the new third man.

The Three of the Black Temple were too successful for their own good. Several evil gods declared open season on them, each to curse the Three once. The Three are currently banished on the demi-plane of Dread, and have yet to identify the god who condemned them to die there.

They are now trying to come back to the terrible war in which they fought, if only to save their loved ones.

A hulking Man Of A Certain Age. He’s still in superb condition and with an impressive musculature.

Magnir is usually dressed in a way that evokes a loose mix of low Middle Ages Scottish and Icelandic clothing. Howbeit, most of the time he’s wearing a field plate armour that in the real world comes centuries later. The armour has stylised turquoise unicorn motifs on the forearms, echoing Magnir’s Dawn Knight marks.

The left side of his body is visibly older. While most do not notice right away, once this has been pointed out it’s obvious.

His left eye is covered with a black leather patch.

The tartan on his clothing would correspond to the real-world East Kilbride motif – though it is the tartan of his village, not his family.

A grizzled veteran whose life has been spent fighting and being in the field. Magnir is a professional defender. He fights to protect the defenceless is his job and what he’s about.

Though he was originally brash, violent, undisciplined and something of a berserker, that was decades ago. He’s now methodical and sophisticated, fighting tactically and planning pragmatically. He is an accomplished soldier, the low-tech equivalent of veteran special forces non-com. 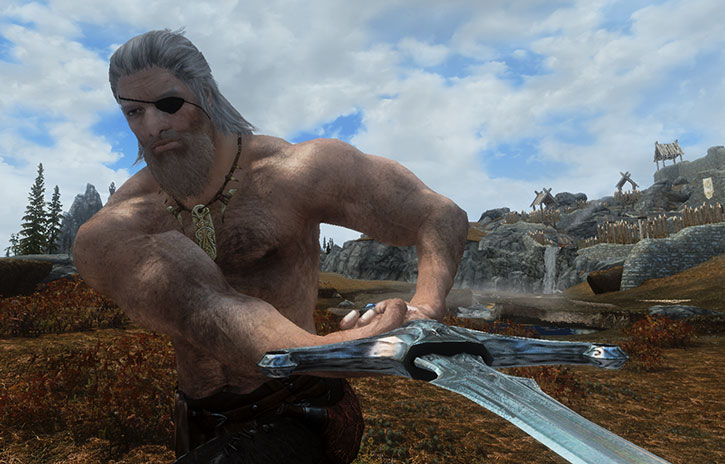 Though he’s a paladin, Magnir the Grey maintains an attitude of arm’s length professionalism. He defends people and fights evil without passion. Over the decades it has become a job, and he simply performs it as best as he can. He has been through so many horrors and seen so many innocents die that everything has faded to a dull roar.

This works well – the old man remains analytical, detached and looking for the most efficient approaches in all circumstances. He can put his heart and fire into certain action, but this is usually done by drawing upon old memories. In “duty mode”, he’s technically-minded.

Magnir still can come across as a rambunctious barbarian – certainly not the monastic paladin type. However, this is mostly a nostalgia thing and he doesn’t really follow through.

He’ll drink a fair bit, but never actually get drunk since he’s still haunted by his fall many years ago. To most of his contemporaries what happened would be an amusing drunk anecdote and/or good for bragging rights. But to Magnir it’s a large piece of guilt that simply doesn’t go away.

Pointing out that he paid for what he did is a reliable way to make him angry. Whether he had to go through a lengthy ordeal changes nothing for the dead men, the violated woman or the ruined tavern owner.

Morwaine and Magnir are mismatched in just about every way. She’s a spooky, Chaotic Evil (well, mostly Chaotic) backwood witch with powerful curses and certainly not a nice person. Furthermore the slim, petite, barely ageing half-fay is now often assumed to be the daughter of the hulking older man.

The two do not get along but are stuck with each other for cryptic reasons that are unclear even to Morwaine. They’re clearly not a couple, just a man and a woman shoved together. Their only ties stem from familiarity with each other, and shared hardship.

Due to the witch’s chaotic nature it is all quite unpredictable. Any given day might range from refusing to talk to each other, to angry sex (albeit with a high level of caution since a pregnancy would be fatal if brought to term), to behaving like old friends with a strong hint of tenderness.

Sometimes she’ll accuse Magnir of her exile, at others insist that he had nothing to do with it.

Bonuses and Limitations:
Medicine is a Powered Skill, and Mystic-Linked. It can be performed without equipment and in any conditions, by laying hands.

Source of Character: Player Character in an Advanced Dungeons & Dragons campaign circa 1990. 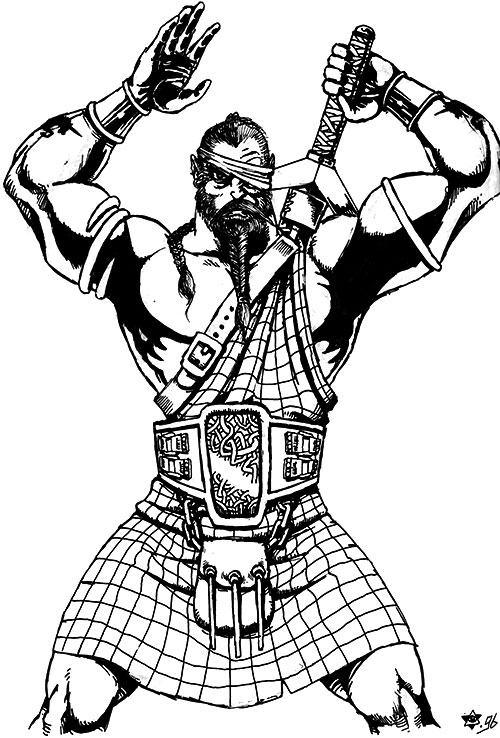 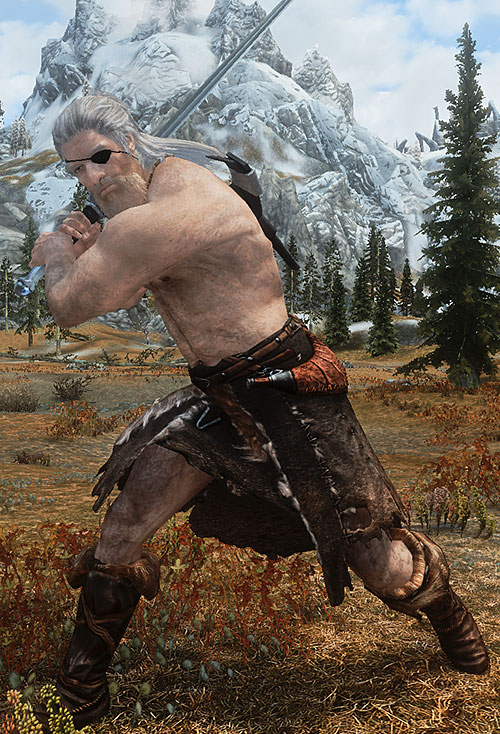 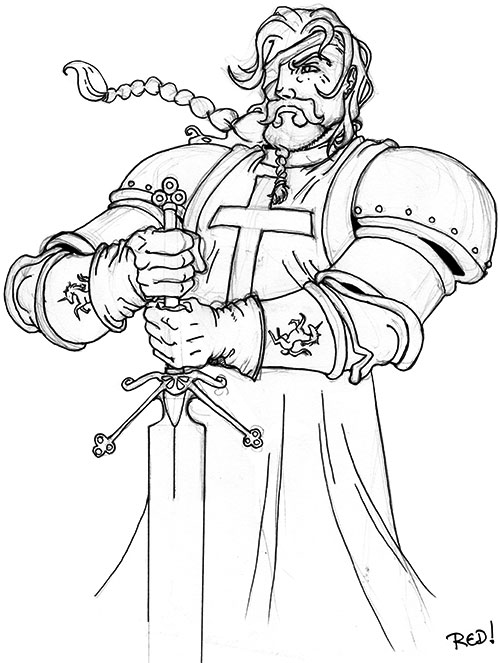 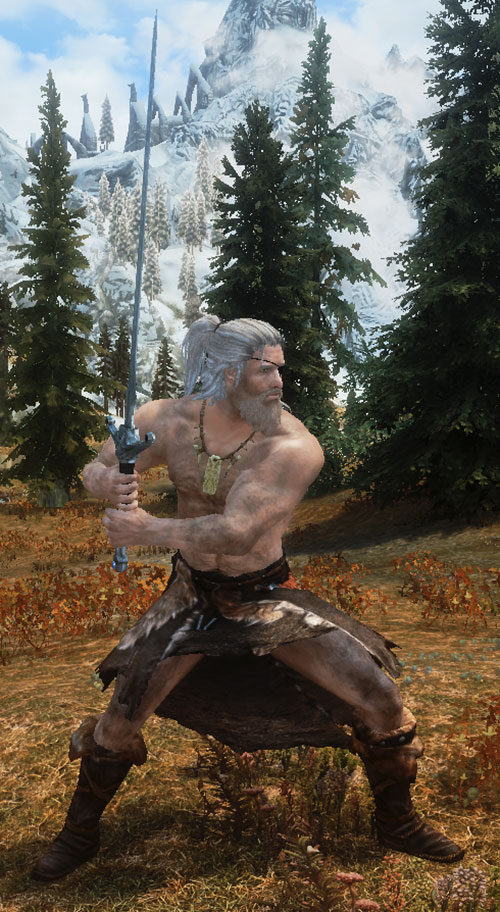 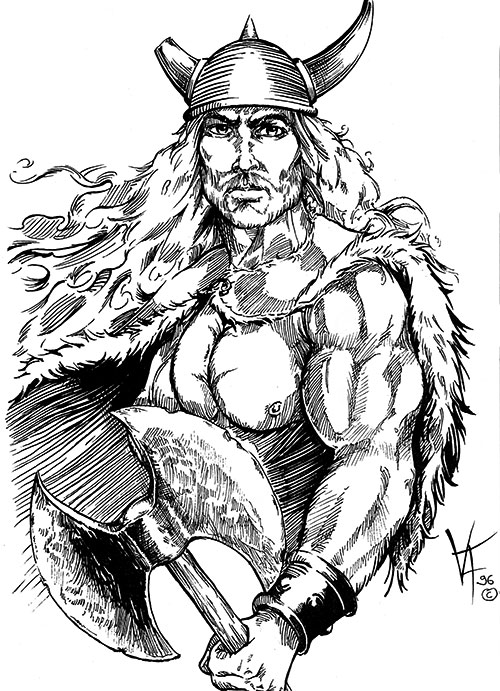