As a result of the supernatural curse placed upon her family, Dupli-Kate has the superhuman ability to create identical physical duplicates of herself at will. Each duplicate possesses the same mass as the original. Through concentration, Dupli-Kate “splits off” a single duplicate.

She can create multiple duplicates consecutively, but can only create a single duplicate at a time. The largest number of duplicates she has manifested at one time was 100 duplicates.

Each duplicate is capable of independent thought, feeling and action. They also are telepathically linked from formation to absorption. If one is injured or killed, the others would not be affected. However, the experience would be a shock for all existing counterparts.

In addition Kate has been extensively trained in hand to hand stand-up, clinch and ground fighting styles, as well as various forms of martial arts, boxing, and wrestling.

Dupli-Kate’s power is mystical in origin. The result of an ancient Chinese curse by the Emperor against his usurper, the Warlord Fung Cha, moments before his death.

The curse was: “The seventh generation after Cha’s seventh grandchild would be burdened with a family too large to care for… and it would drive him mad.”

Just under 20 years ago, Fung’s descendent Tsing Cha fell victim to that curse. Tsing’s wife died giving birth to twin children, Kate and Paul, leaving him to raise the children alone. But when the pair became toddlers they suddenly began to split into hundreds of identical duplicates. Unable to cope, Tsing went mad and the children were taken into state care.

Numerous scientists tried and failed over the years to figure out how the twins’ powers worked. But luckily when they reached puberty they finally developed control of their powers. They were now capable of generating and reabsorbing their doppelgängers at will.

The twins became a crime fighting duo, until Kate joined the Teen Team. She was a member of the team for four years. During that time, she started up a clandestine relationship with Rex-Splode. When the pair’s relationship eventually found the light of day, it broke up Rex and Atom Eve.

Shortly thereafter, Robot broke up the Teen Team. That was in order to graduate to the big leagues and join the Guardians of the Globe. This was in the cards due to the original Guardians’ deaths at the hands of Omni-Man. Kate tried out for the new incarnation along with Robot and Rex. They made the team. 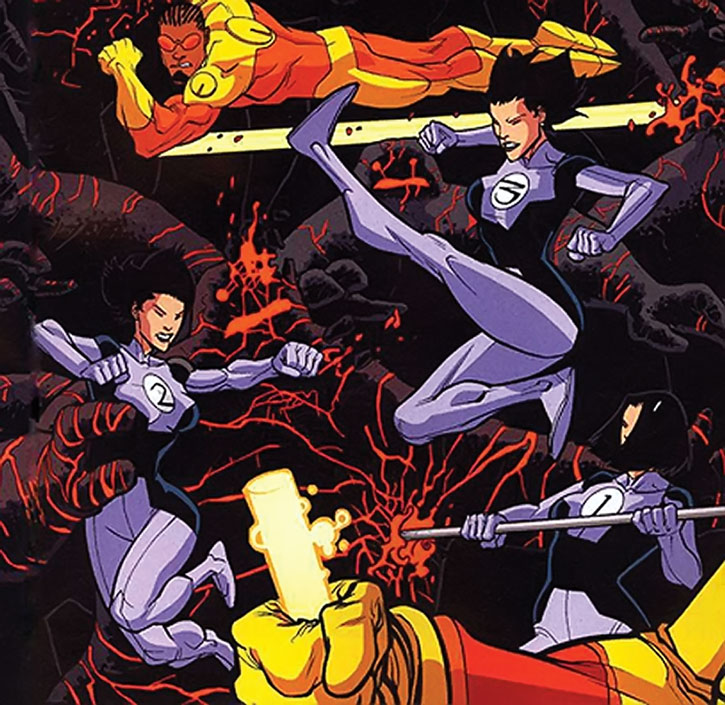 Kate was sent to Montana with Rex-Splode and Shrinking Ray. The mission was to prevent a nuclear war brought about by the Lizard League. In the ensuing battle, every single one of Kate’s bodies were viciously murdered by Komodo.

A funeral was held for her with the highest honours. Distraught, the Immortal succumbed to his grief. He left the Guardians, moving to the north for some solitude.

After a brief period of time, Kate revealed to the Immortal that she was still alive. For the sake of her own safety, Kate had been living her life through her duplicates who all shared her power. As long as her zero was still alive, she couldn’t be killed.

Kate and the Immortal returned to the Guardians. They remained with the team even through the controversy arising over their government handler’s treatment of Invincible, which led several other members to leave the team.

During the brutal Invincible War, all of Kate’s bodies other than her zero were killed again. The Immortal also suffered yet another decapitation. As a consequence the revived Immortal finally accepted Kate’s request to retire from superheroics with her in order to start a family.

Kate is an attractive young Asian woman, with a stunning athletic body. She has no problems attracting the attention of men.

She wears her dark black hair at shoulder length. Her costume consists of a black and purple unitard with an oval in the center of the chest. Within the oval is a number which increments by one for each duplicate.

Kate is… well… flighty. And previously… easy. Outside of those traits, she is fun and extremely professional in a fight. She is fearless in battle (most likely due to the fact that her true body isn’t there) and hates to be coddled.

The Immortal: “Careful, my love. I won’t have my future bride hurt by these savage beasts!”
Dupli-Kate: “What are you — I’m fine! Let me do my job !! Back off and leave me alone — you’re embarrassing me !”