The Dweller seemed fully amphibious, somehow supporting its full height and weight whilst on dry land. It is possible that he needs to return to the sea after a few days, though.

Bloodstone — an experienced monster hunter — didn’t go for the eyes or anything like that. Therefore, we’ve assumed in the game stats that the creature didn’t have readily identifiable weak points.

The Dweller of the Depths seemed to be sapient  and to have a language. “Kartaan” probably means “noise” or “vibration”, for instance.

The Dweller was probably a member of an otherdimensional  species who was fetched from his home by the Hellfire Helix to harass Ulysses Bloodstone. That was the usual modus operandi for the Helix.

But it remains possible that the Dweller was a Earth native. Say, a giant Deviant.

The creature was also called the “Demon from the Depths” and the “Sea Creature”.

If you’re going to San Francisco

The Dweller appeared in the San Francisco harbour in 1975, smashing things out of anger. This unusual behaviour was provoked by a blind man playing a flute on a nearby pier. This man was a host for a possessor looking for a powerful and durable body.

The possessor somehow knew that the Dweller was in the nearby water. He had been playing a special music on the blind man’s flute to attract the giant and prepare it to be possessed.

Ulysses Bloodstone fought the Dweller, then noticed the blind man. After it became obvious that the blind man was possessed Bloodstone knocked him out. The relieved Dweller returned to the depths.

On the cover, the Dweller is coloured green, but he’s always orange in the story.

Impossible to say. Especially since he was the under the influence of the possessor’s flute. 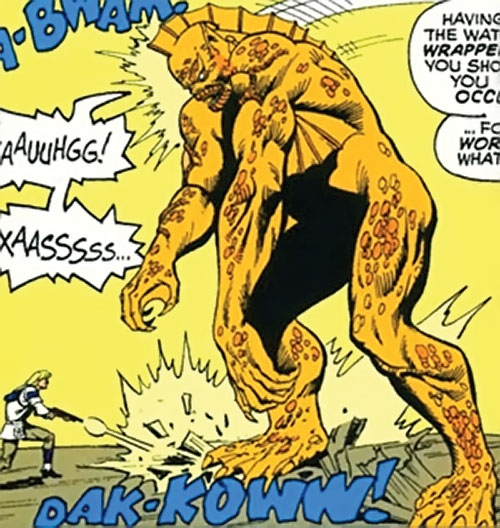