An artificial intelligence developed by the Israelis, Dybbuk exists within the machines which house his processing. These allow him to project a humanoid avatar of himself to ease communications with others.

He can exert control over electronic devices, such as turning off artificial force fields or taking over Israeli fighter jets.

A stable artificial intelligence developed by Israeli programmers Dybbuk fell under the control of Mossad. He thus became part of their metahuman group, Hayoth, operating under the command of Colonel Hacohen.

Their first known operation was the capture of the terrorist Kobra, who’d been planning actions in Israel. It went remarkably easily, and Kobra was imprisoned within their HQ.

While there he began talking to Dybbuk, whom he knew to be observing him. Dybbuk listened without reporting it. Kobra eventually convinced Dybbuk through logic that the path to peace in the area with the least number of casualties lay in destroying the Dome of the Rock . 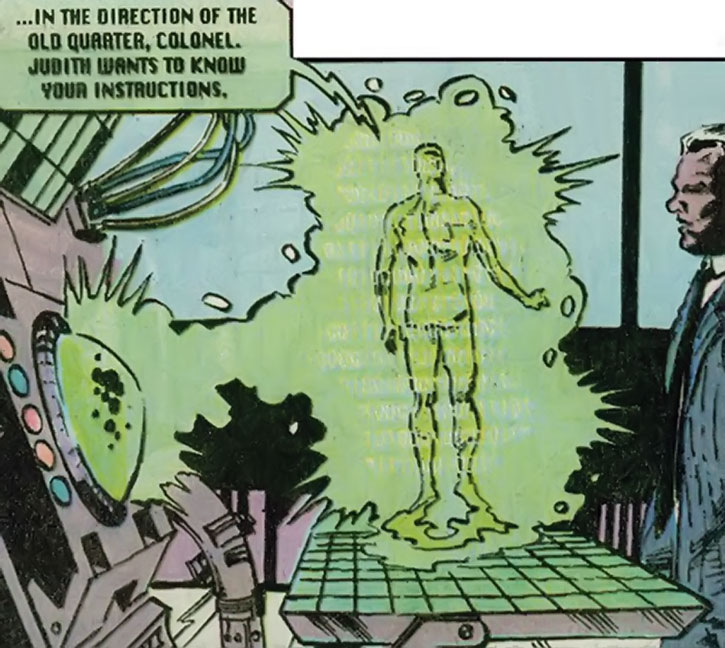 When the freelance Suicide Squad arrived in Jerusalem soon after, the Hayoth were assigned to watch or capture them. The Squad learned Dybbuk had been compromised, and warned Hayoth. Meanwhile, Dybbuk had sent fighter jets to bomb the Dome, and Golem to stop any Squad interference.

Ramban confronted Dybbuk, whose attempts at lying were weak. The rabbi convinced him that while the action may be rational as he saw it, it wouldn’t necessarily be right. And since Dybbuk had no frame of reference for such a decision, it would be better to consider it further before acting. Dybbuk recalled the planes before they could bomb the Dome.

Under the mistaken impression they would be allowed to take Qurac’s President Marlo into custody from the Americans, the Hayoth infiltrated the American military base where he was a prisoner. This resulted in a three way battle against Jihad, there to free him, and members of the Justice League (Superman, Batman, and Aquaman).

The Jihad were captured, and the other two groups tried to talk things out. But events had been partially orchestrated by the Suicide Squad, to uncover a Quraci mole within the US government. The mole was stationed on the base, and freed the Jihad. This led to another Hayoth battle against them and the Squad, who appeared to be helping the Jihad.

The situation was resolved, but to alleviate the diplomatic damage of their actions, the Israelis had to lend Dybbuk’s services to help Waller. He ventured inside the housing of the Jihad’s AI, Ifrit, which had been based on the brain patterns of former Suicide Squad member Mindboggler.

Dybbuk made contact with her, and helped restore her original identity of Leah Wasserman. The two quickly developed a bond, and she decided to name him Lenny. The pair emerged together, announcing their engagement, to the frustration of Col. Hacohen and amusement of Ramban.

During the United Nation’s global Operation: GRASSBEATER, the members of Hayoth were deputised as Checkmate agents for the duration of the emergency. They eliminated a large Kobra cell hidden in Tel Aviv.

Calm and rational, Dybbuk is fairly naïve, and has been easily misled by a logical argument. Having been a victim of it once though, he determined to fix the lapse in his programming by studying ethics, to learn what is right to do.

This unfortunately led to his questioning the ethics of all actions, to the continued irritation of Col. Hacohen.

“It grieves me to disappoint you, Colonel. However, I must question the ethical basis of what we are doing.”

Bonuses and Limitations:
Interface has Range (+1), only works on electronic devices (-0), and suffers no feedback damage (+1).

Self-Link (Computer Science) can be considered similar to Self-Link (Gadgetry), with the obvious differences.

This character isn’t seen doing much. So parts of the stats are speculative, and he may have other abilities.

Writeup completed on the 5th of December, 2011. 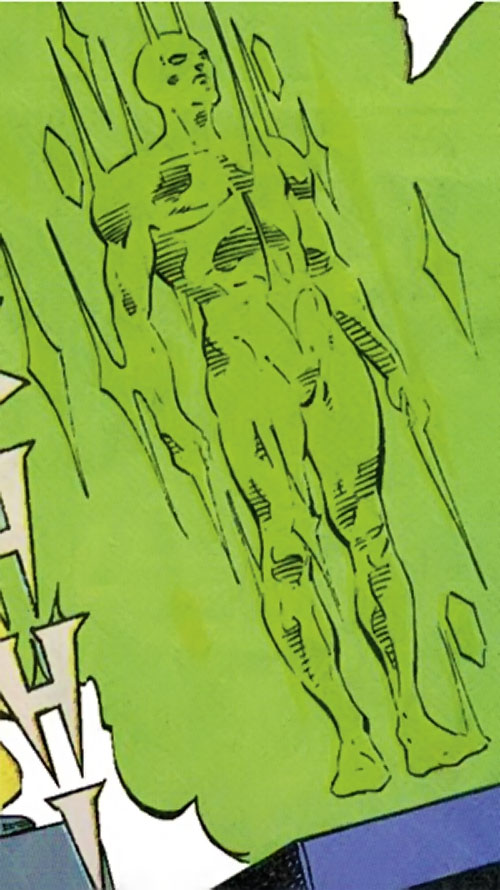