His amazing psychokinetic abilities apparently reinforced his body enough to let him shrug off Superboy’s initial blows (with Superboy hitting in the low “Class 5” range). When Superboy turned up the heat, Webber could throw up a force field to shield himself, or phase  to allow attacks to pass through him.

His telekinetic powers enabled him to effortlessly levitate buildings or immobilize and potentially crush an angry Kryptonian (Telekinesis). He could teleport himself and his loot across thousands of miles (Teleportation) and even into orbit. His mental bolts knocked Superboy flying (Mental Blast), at least until the Boy of Steel got mad.

Dyna-Mind could also give life to the unliving (Animate Objects), and could psychokinetically rearrange atoms and molecules (Matter Manipulation), turning guns to dust or bank vault doors into air.

Dyna-Mind often combined these latter abilities. He would use Matter Manipulation to give an object a humanoid form and appropriate powers, while simultaneously using Animate Objects to bring his creations to life. He once transformed a wall into a giant humanoid automaton imbued with traces of Kryptonite, after using Scientist (Analysis) to figure out Superboy’s weaknesses.

He could animate half-a-dozen or more creations at one time and have them perform simple tasks (such as guard duty) while he was somewhere else.

Johnny Webber was a teenage classmate of Pete Ross, Lana Lang, Bash Bashford, and the rest at Smallville High School. He was a bit of an obnoxious class clown. He also was one of the boys who frequently targeted super-nerd Clark Kent for practical jokes.

His life changed one autumn night at a high school dance.

After one of his practical jokes backfired (affecting Bash the jock as well as Clark), Johnny made himself scarce and hid outside. This put him in the right place at the right time to be caught in dust from one of Smallville’s frequent meteor showers. The dust contained both red Kryptonite and another, unknown extraterrestrial substance.

Normally red Kryptonite has no effect on humans. But in Johnny’s case, the interaction of the mystery element and the red k had bizarre side effects. The meteor dust stimulated his brain into using its full capacity. That gave him intellect and psychokinetic powers that made him a match for Superboy.

Johnny briefly considered using his powers to become a hero. But when his advanced intellect reasoned out that his powers would only last for 48 hours (as is normal with red Kryptonite), he decided to cash in on his abilities while he could. He fashioned the identity of Dyna-Mind and stole rare and valuable coins from the Smallville County Fair.

Superboy opposed him, but Dyna-Mind easily eluded the super-teen and teleported himself and his loot to safety. He hid the coins inside an active volcano, using his powers to create lava-creatures to serve as guards.

Dyna-Mind next attacked the Smallville Savings and Loan. He lifted the building, foundation and all, into the air. When Superboy challenged him, Dyna-Mind showed even greater powers than in their first encounter. He demonstrated Superboy’s inability to hurt him and then animated a statue imbued with traces of Kryptonite to keep him busy.

The Boy of Steel took care of that threat quickly enough. But in the interim Dyna-Mind had once again escaped, teleporting away with every last dollar from the bank vault into a hidden undersea grotto. This time he used his Matter Manipulation to create a gigantic simulacrum of Neptune, complete with an energy-projectingg trident, to function as guard.

Dyna-Mind followed up with his final (since his powers would vanish soon) and most ambitious theft. He attacked Fort Knox with the intent of stealing the nation’s stockpile of gold. He transformed soldiers’ guns to dust and put up a Force Field to keep them out of the building. He then turned the vault doors to air and began teleporting the gold away to a satellite in orbit.

Again, the satellite had a guardian created by Dyna-Mind.

Superboy, angry at his failures to stop the super-criminal, showed up at Fort Knox and attacked. But Dyna-Mind exerted the full force of his abilities. These powers proved formidable enough to telekinetically immobilize even an angry Kryptonian. He began squeezing Superboy painfully in his mental grip.

Superboy, struggling futilely, suddenly realized the import of Dyna-Mind’s boasting about having received his abilities the previous Friday night. Guessing that this must be related to the meteor shower, Superboy used his microscopic vision to analyze Dyna-Mind and detected the mystery element imbedded in his skin.

Using his heat vision, he burned away that element, depriving Dyna-Mind of his powers ahead of schedule, before he could escape.

But Dyna-Mind’s super-intellect, while he had it, had allowed him to plan ahead for such an eventuality. He immediately went into an act, pretending not to remember where he was or what had happened since Friday night.

Superboy in his naïveté immediately concluded that the meteor dust must have turned Johnny evil as well as giving him powers. Superboy testified to that effect to the authorities, and promised to track down and return the stolen loot.

That too was part of Johnny’s plans. He knew that Superboy would be able to track down and retrieve the stolen items. Therefore, his supposed “guards” were actually created to absorb the super-energy the hero expended battling them and relay that power to Johnny.

This would give him the power for one last feat as Dyna-Mind, teleporting the loot directly to him once he’d thrown Superboy and the authorities off his trail.

However, after defeating the lava-creatures and the faux-Neptune, Superboy realized how Johnny was manipulating him. He hid in the chest of money that Johnny had hidden undersea. Thus, when Johnny teleported it to his home, Superboy was there to expose him for the criminal he really was.

Johnny Weber is a teenage boy with red, wavy hair, blue eyes, and average height and build. He frequently has a sneer or a look of cunning on his face.

As Dyna-Mind, he wore a red costume with orange cape, shorts, and boots. He had orange wristbands and his boots were topped with a streak of white. He had an orange “D” on his chest and wore a mask that almost resembles a hood. It is deeper red than his costume, almost black.

The cover illustrations that show Dyna-Mind have an “M” on his hood, but in the actual stories the hood is plain, with only slits for his eyes and an opening for his nose. There is no opening for his mouth.

Even before getting his powers, Johnny is a sneering and sneaky guy. He plays lots of pranks and enjoys making inoffensive nerds look even nerdier. He was also apparently charismatic enough to usually get away with whatever pranks he pulled. He was usually able to talk himself out of trouble and even Clark Kent did not seem to think too badly of him.

As Dyna-Mind, he continued to sneer at others and make jokes at their expense. He was tremendously arrogant and never really considered the possibility that he might be beaten or that someone else might see through his plans. He enjoyed using his powers, the moreso since he knew they were temporary, and relished opportunities to show them off.

He was not a vicious fighter, and didn’t try to seriously harm anyone. But he didn’t mind terrifying them, either. He was also your old-fashioned “just out for the money” criminal.

“You can call me Dyna-Mind ! I think this dynamite demonstration will make the reason for that name quite clear ! Ha ha ha !”

“I was only toying with you before, but it looks like you wanna get into some heavy hurting… and I’m just the guy to give you a hard time!”

“Gosh, you’re some kind of friend, Superboy ! Not to mention a real super-sap ! Ha ha ha !”

Lose the Kryptonite connection and he could be a villain for any suitably powerful hero.

Drawbacks:
Age (Young – about 16); Alter Ego (Uncontrollable); Loss Vulnerability (losing contact with the “mystery element” imbedded in his skin); Secret Identity; Miscellaneous: after a maximum of 48 hours, Dyna-Mind would have reverted permanently to his powerless Alter Ego as Johnny Webber.

Equipment:
DYNA-MIND COSTUME [BODY 03. No powers, but the mask is lined with lead to block Superboy’s X-Ray Vision.]

This pre-Crisis Character is written up on a Post-Crisis scale. It’s also occasionally hard to gauge how much Superboy is pulling his punches when hitting Dyna-Mind.

Note that for this writeup I’m assuming that a grown-up Superman has a DEX of 10, though Superspeed can be subbed to increase it. Superboy, at this point in his career, has a DEX of 07 (having recently learned boxing to increase it from a 05 previously).

Dyna-Mind seemed to grow in power, becoming more formidable in each encounter. In DCH terms, this is explained via his expenditure of Hero Points.

In his first encounter with Superboy at the Smallville County Fair, he spent a modest 10 HPs, most of that to allow him to Dodge Superboy’s first attack. He quickly broke off the fight by teleporting away, choosing not to waste time fighting before he’d used his temporary powers to accumulate wealth.

He used similar tactics in his second battle, creating a distraction to occupy Superboy while again teleporting himself and the money away.

But in his last battle, at Fort Knox, he knows his powers will fade soon and this is his last fight. Eager to show what he can do, and with no further need to conserve his strength, he seems dramatically more powerful.

Ironically, Superboy, who typically doesn’t use his own HPs, is by this time angry enough to spend a few. But he’s not prepared for Dyna-Mind’s sudden spending spree, as the villain blows more than 50 HPs in just a couple of Phases, enabling him to put Superboy on the ropes.

Presumably, if you choose to have Dyna-Mind return with more permanent versions of his powers, his HP spending will even out to follow a more normal pattern.

Drawbacks:
Age (Young – about 16); Dark Secret (actually being responsible for Dyna-Mind’s crimes, rather than being turned evil by the meteor dust like he pretends).

Source of Character: DCU (The New Adventures of Superboy #42-44). 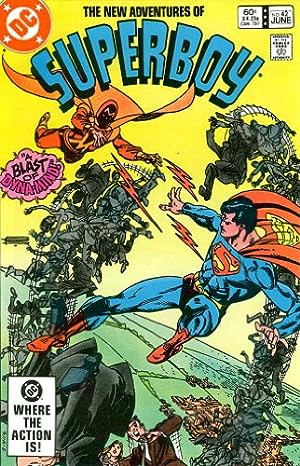 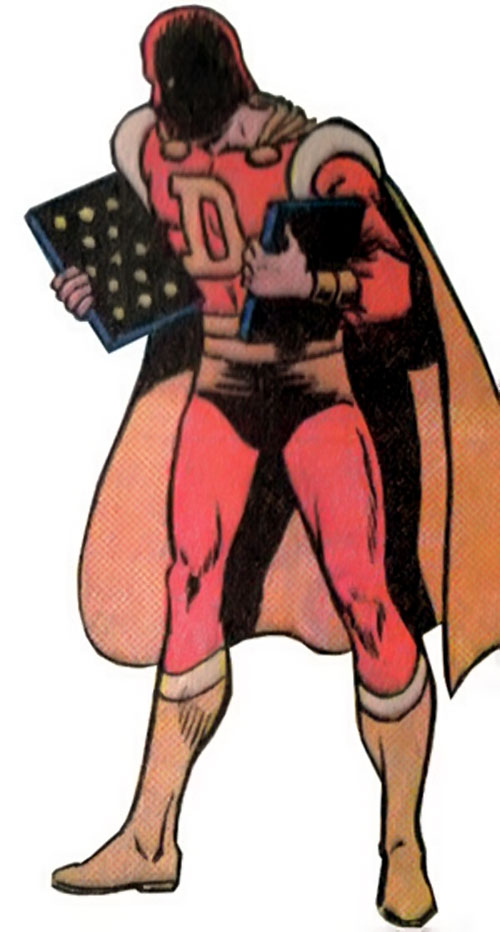 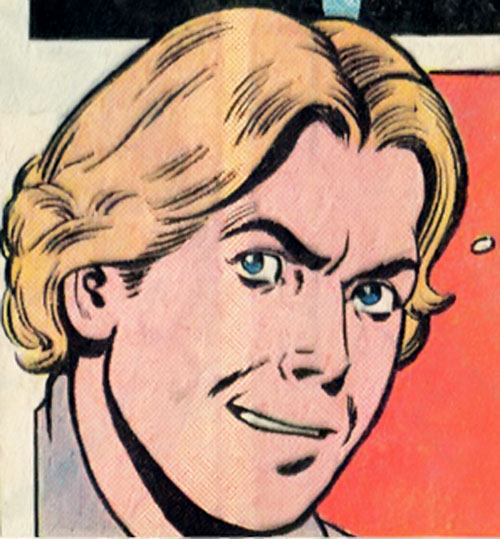