By pressing his two dyna-rings together, Dyna-Mite triggered a chemical reaction that charged him with an unknown form of energy. That gave him super-powers for a brief period of time. By pressing the rings together again, Dyna-Mite could renew his powers.

The energy enabled him to project energy blasts from his hands, with effects comparable to a hand grenade.

Danny Dunbar was the star pupil of Thomas N. Thomas (who was called “Tom” or “Tex” for short). Thomas was a high school chemistry and physical education teacher in the early 1940s.

One evening, while Thomas and Dunbar were working on an experiment, Thomas’ hand accidentally touched Dunbar’s. Both teacher and student found themselves feeling much stronger.

Thomas realized that each of them had somehow absorbed the chemicals with which they had been working. By touching each other, Thomas and Dunbar became charged with an unknown form of energy and briefly possessed superhuman powers.

They decided not to reveal their discovery publicly, for fear that it would be misused. Instead, they used their new super-powers to fight crime as costumed heroes. Thomas became known as T.N.T. and Dunbar as Dan the Dyna-Mite, and both joined the wartime All-Star Squadron.

Disaster at the dam

The heroes’ car veered off the road, crashed and burst into flames. The young hero Iron Munro pulled T.N.T. and Dyna-Mite from their car. But T.N.T. was dead, and his spirit was carried off by the Valkyrie Gudra. Munro took Dyna-Mite to an hospital, where Dunar soon recovered.

On President Franklin Roosevelt’s request, Dyna-Mite joined six other young members of the All-Star Squadron on a cross-country tour. The goal was to encourage the buying of War Bonds, and these seven heroes were nicknamed the “Young All-Stars”.

With Thomas dead, Dyna-Mite believed that he could no longer use his own super-powers. But he soon he learned he could do so by wearing both dyna-rings and pressing them together himself.

It is unknown whether Dyna-Mite survived the war.

An alternate post-war destiny was detailed for Daniel Dunbar in the The Golden Age Elseworld .

Bonuses and Limitations:
Bomb power can only be used if he touches the two dyna-rings together (-1) ; previously he had to press his ring against TNT’s (-2). 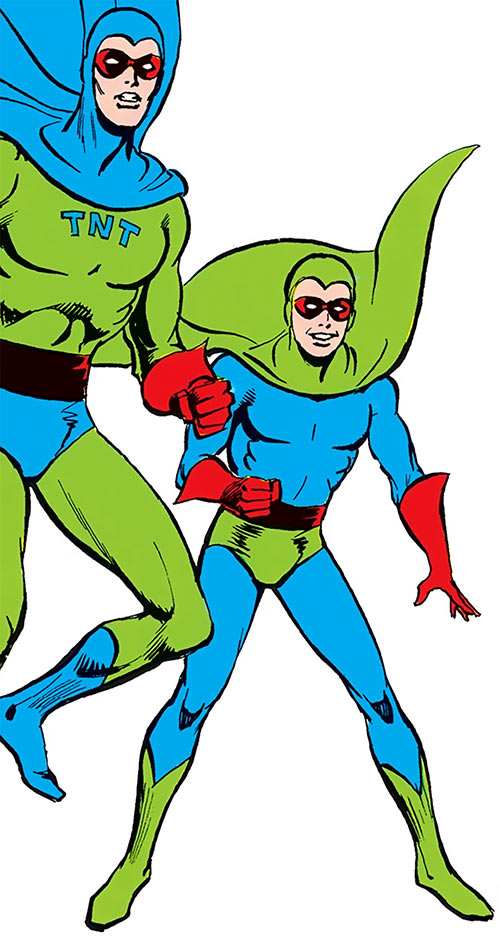