Badde is a renegade witch-man from Limbo Town. He adapted from flintlock pistols to his Uzi.

Like all witch-people, he has a draaga. Fearnaught, the draaga-alligator Badde rode, was not seen much. But for game stats purposes I assumed it was similar to Teekl (Klarion’s draaga-cat) in its training and abilities.

Fearnaught is by far the biggest draaga ever seen. All other draaga could perch themselves on their master’s shoulders, or at worst be held in their arms. It is likely Fearnaught had access to much, much more food in the sewers than in Limbo Town.

Although Klarion never realized it, Ebeneezer Badde was his father. An adventurous and rebellious soul, Badde had fled Limbo Town. He survived pursuit, then lost himself in the tunnels.

Exploring his new environment with his draaga-alligator, he eventually became a slave-trader of the subsecret underground. He would capture children (including the occasional Leviathan child) and sell them to street criminals from above. Those surface men traded with the weird, brutal subsecret underground in a meeting place called Vanity Fair. 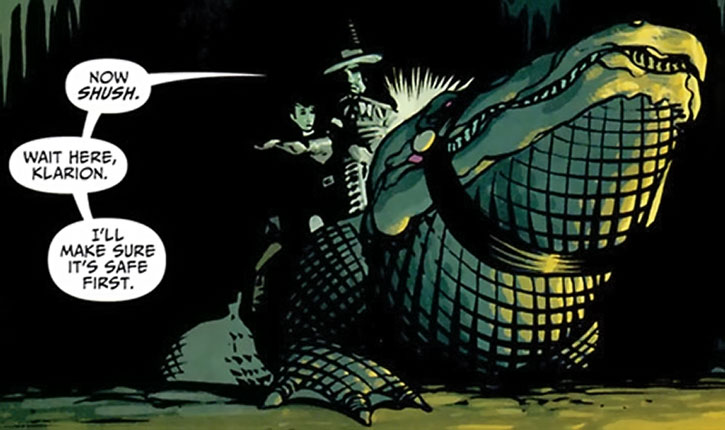 Shortly after Klarion ran away from Limbo Town, he got chased by Horigal, the composite form of the three Submissionaries ruling Limbo Town. Badde happened on the scene, shooting Horigal in the head.

This did not slow down the creature for long, but this delay soon resulted in Horigal being smashed when the pirate train of under-pirate warlord No-Beard, the President Clinton, came screaming in.

Badde took Klarion to Vanity Fair to sell him. Meanwhile the excited witch-boy was marvelling at the sewers and making stories up. However, Klarion and his draaga-cat, Teekl, soon discovered the truth about Badde’s intent.

The pair allied with Leviathan. They convinced the dragon with five hundred eyes and five hundred hands to come kill Badde and the slave traders by surprise.

Moments before Leviathan came, the guilt-ridden Badde had a sudden change of heart. He yelled to Klarion to run, as he apparently intended to shoot the other slavers. However, this last-minute change was lost to Klarion. Badde and the slavers were seemingly killed by Leviathan.

Badde failed. He won freedom from Limbo City, but did not dare or want to go further and settled for a miserable life in the sewers, trafficking in children “for liquor and baubbles”.

He was bitter about this, and kept telling Klarion the subsecret tunnels were just a world and that he would soon find it boring, and mundane, and just become concerned with simply eking out a living in this brutal underground.

He was guilt-ridden, never told Klarion he was his father, and kept showing him things he ought to know about (such as the House of Croatoan) instead of taking him straight to Vanity Fair to be sold.

He nearly knew redemption at the last second but that was lost, too. Klarion was lost in his own narrative and did not catch Badde’s change of heart.

“Aye. You have the look of Limbo Town — the Sheeda face. What name did they give you and where d’you hail from ?”

“Until then, I suggest you follow. These rails are far from safe and bear such engines as you saw. We travel on night rivers now, whereby the filth is carried down from a higher world than this. My own draaga, Fearnaught, knows these lightless tunnels well.”

“What have ye become, Ebeneezer Badde ? You’d sell your blood for liquor and baubbles.”

Bonuses and Limitations:
Eye of the Cat only works on Fearnaught.

Drawbacks:
MIA toward killing giant arachnids/arthropods, Fatal Vulnerability (being separated from Badde for more than a few weeks (days ?)). 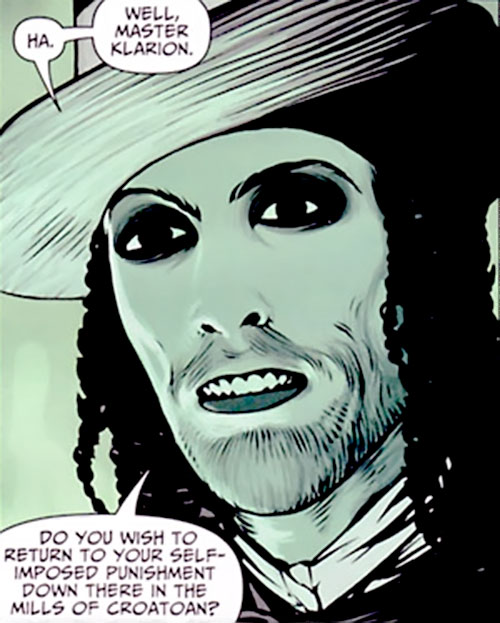