Echo & Query are two street-level, Gotham-area henchwomen. They have chiefly worked with the Riddler, and first appeared in 1995.

Though they’re just muscle, they have some hooks and are fun to feature. So they’re useful to have on file.

Both Echo and Query are adept athletes, brawlers, drivers and weapons expert.

They also have an unusual competency with all sorts of dangerous sports, such as scuba diving or base jumping. They love this stuff.

They are also trained in demolitions, likely by the Riddler.

Echo prefers lighter armament, and will usually pack one or two handguns.

Query likes heavier stuff, such as shotguns. She even once operated a M60 light machinegun, carried by a sling and shot from the hip. Even if she uses a handgun, it’ll be a large-bore revolver rather than the medium-calibre semi-autos favoured by Echo. 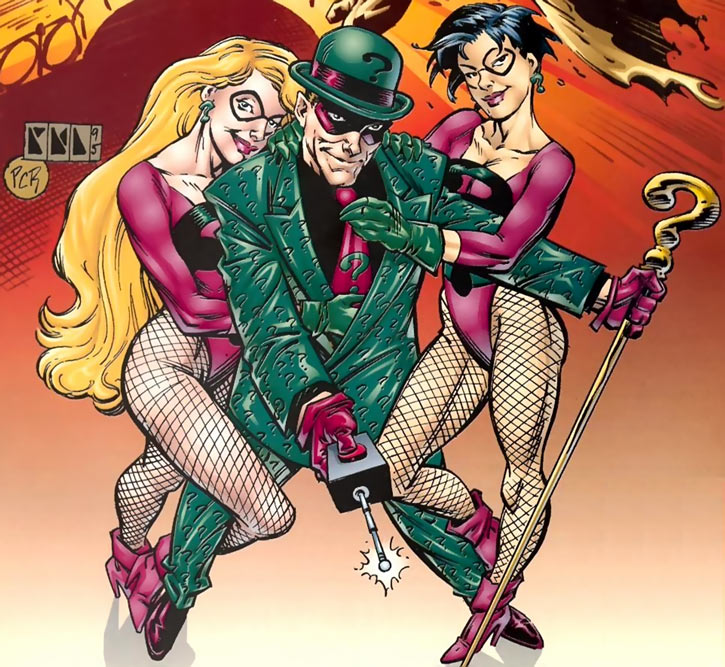 Though they are but a speed bump against the likes of Batman, Nightwing or the Black Canary, they are clearly more dangerous than most henchpersons. They can challenge low-level street heroes.

Both have a remarkable level of fitness, and are excellent healers. They presumably have a superior alcohol tolerance for their weight.

Though they’re not deep thinkers, they have quick brains even under pressure. They’re also good with riddles, from experience.

If background information was given for the pair in primary sources , I’ve yet to run across it.

It is possible that, say the Riddler mentions such details in dialogue in a story I haven’t read.

In 1994 or 1995, the pair ran into the Riddler. He had been holding a shop at gunpoint to obtain the cash within the register. But when he exited they held *him* at gunpoint to get the cash. That was, as they say, the beginning of a beautiful friendship. 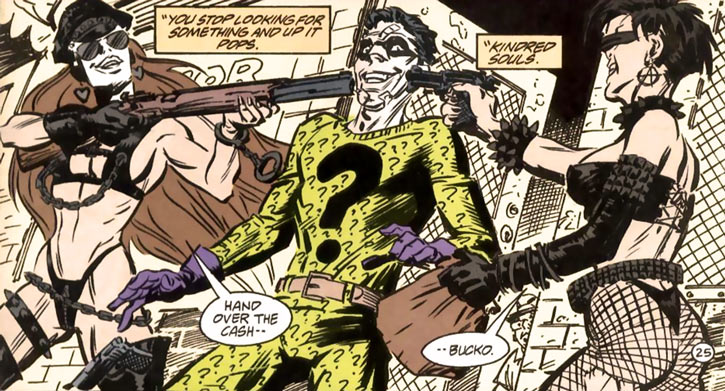 The two women likely already were themed/costumed criminals at that point. Their “costumes” were the skimpiest leather underwear  they could find, plus a few accessories such as spiked bracers, chains, ammo belts and Query’s favourite black leather cop hat.

Echo and Query restyled themselves as elite henchwomen for the Riddler. They were a part of many of his schemes, though they didn’t really care about the details. The pair was in for the thrills and action.

With Query and Echo, the Riddler was much more of a physical threat than before. Though the girls couldn’t do much against Batman, they were markedly better than most cops and criminals in the Riddler’s way. And they were nigh-fearless.

The pair worked for Slyfox once, in 1998. That was because the Riddler was in prison at that point. The plan failed due to Nightwing and Batman One Million. Plus, Query and Echo didn’t like Slyfox anyway. He was a slimy lecher who could barely keep it in his pants when working with them.

Echo and Query continued to work with Riddler from 1995 until Flashpoint.

Query is the taller one with the longer hair, who frequently changes her hair colour.

Echo is the one with the short black hair. On the cover of her first appearance, Echo had light olive skin.

As Riddler henchwomen they pattern their costumes after his, but they frequently change the details. Usually they’ll have a purple or green leotard with fishnets and — of course — question marks. But they’ll happily throw in cute accessories, such as flared collars, question-marked-shaped earrings or adorable bowler hats. 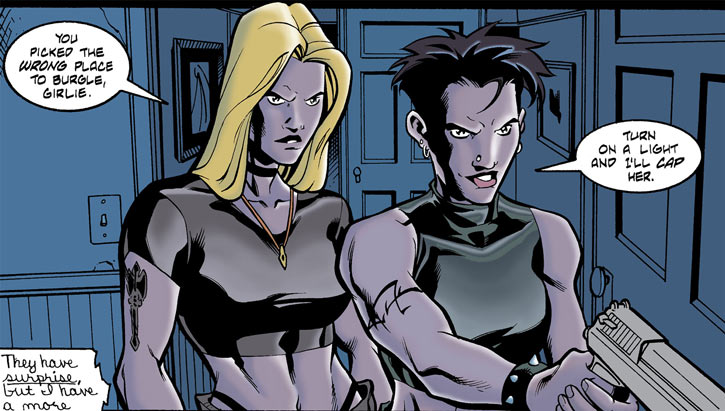 Query will also have her leather cop cap on whenever she feels like it.

Their costume always include slim little domino masks. These cover very little and likely have to be held in place using spirit gum .

During an attempt to force the police to free the Riddler, they dressed up in their own version of Riddler-themed clothing. These were closer to clubbing outfits than costumes, though.

Both have a tat on their right biceps – heavy metal battleaxe for Query, jagged tribal patterns for Echo. They also have complementary nose piercings (left side stud for Query, right-side stud for Echo). They remove the piercings and apply foundation over the tats when in Riddler henching costume.

When not in costume, they dress like outlaw bikers. So that’s a lot of leather. But the clothing is clearly intended to ride while looking good rather than just look good.

Curiously, despite their taste for looking like skimpily-clad sex kittens, they are usually treated as deadly operators by Gotham criminals. Either they have enough of a reputation, or they give off a genuinely dangerous vibe. Probably both.

Early on, the pair instead went by Quiz & Query. Back then, the Riddler was making special efforts to have homogeneous, dynamic looks for his gang. For instance the blokes were all bodybuilders with themed coveralls and a distinctive hair style.

During this phase, both girls wore black cycling shorts and lighter sports bras, plus what may have been grey hi-top sneakers. They both wore their hair in a long queue and Query dyed hers black like Quiz’s. They also seemed to use makeup to resemble each other.

Echo and Query are adrenaline junkies and criminals, with no interest whatsoever in a normal life. They are always looking for danger, excitement and pleasure.

During a dangerous op they’ll usually be grinning, giggling and enjoying themselves.

The pair has a strong rapport. For instance, Echo will occasionally finish Query’s sentences. 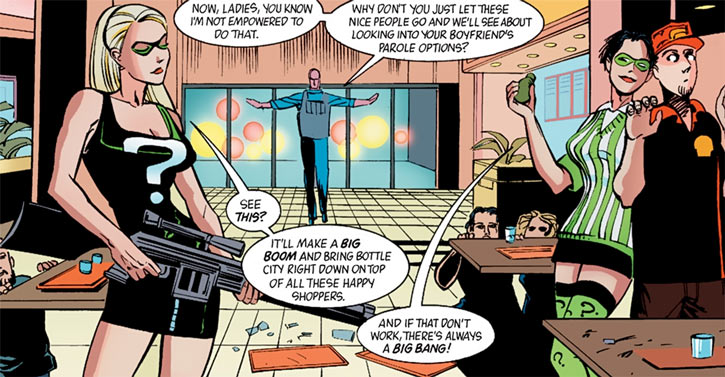 They also seem to like the Riddler, presumably because his heists have a sense of fun and playfulness. They actually are loyal toward “Eddie” (they always call him that). They even once took hostages to force the police to release him from prison. Presumably, they were bored.

They do come across as unreasonable, perhaps a bit unhinged – but clearly not insane.

They are also unusually brave, and never hesitated to go all out and engage Batman in hand-to-hand combat. Query is slightly more aggressive and assertive than Echo.

The pair doesn’t seem to resent doing menial tasks as part of the Riddler’s plan, as long as :

Query: “How’s a policeman like an old penny ?”
Echo: “They’re both dirty rotten coppers !”
(Both open up with suppression gunfire against the police).

Cluemaster: “You have a helicopter, right ? That’s the getaway, right ?”
Echo (planting explosives): “That’s so tired. We got something a lot cooler in mind.”

(After base jumping from a collapsing rooftop radio tower across the street whilst under police fire)
Query: “Wotta rush !”
Echo: “I wanna do it again !”

Both have the same stats.

Skills:
Query may also have Animal Handling (Snakes): 03 or so.

Equipment (Echo):
Typically a medium-calibre high-cap handgun. Occasionally two, though she doesn’t have the Paired Weapons Schtick. Sometimes she’ll use one of Query’s magnum revolvers. See the Weapons Locker articles for the stats.

Equipment (Query):
At her most compact, a magnum revolver. If she has the room, she’ll prefer a repeater shotgun, an enhanced battle rifle or even a light machinegun.

Against run-of-the-mill opponents, Query and Echo tend to use their high Initiative to Lay Back, and suppress the opposition via copious gunfire as they and the Riddler retreat. They likely won’t kill anyone, and ordinary return fire has little chance of hitting them.

If Query has a suitable weapon she might formally employ the Suppression Fire Combat Manoeuvre. Given their robust coordination, the Gamemaster can also allow them to pull that Manoeuvre if their combined volume of fire allows for it.

One suspects that Query and Echo would be less effective if they didn’t work as a duo. But this isn’t demonstrated… since they always work as a duo.

Note how they have practically zero Hero Points (and what they have they keep for LDD).

Thus, as long as they are dealing with cops or very low-powered heroes (such as Spoiler early in her career) they’re good. But against superior opposition they won’t have a fighting chance. Even against a mid-weight like the Huntress, Echo and Query simply cannot afford AV or EV boosts.

So they’ll just LDD a few of her attacks to slow her down whilst the Riddler runs away. 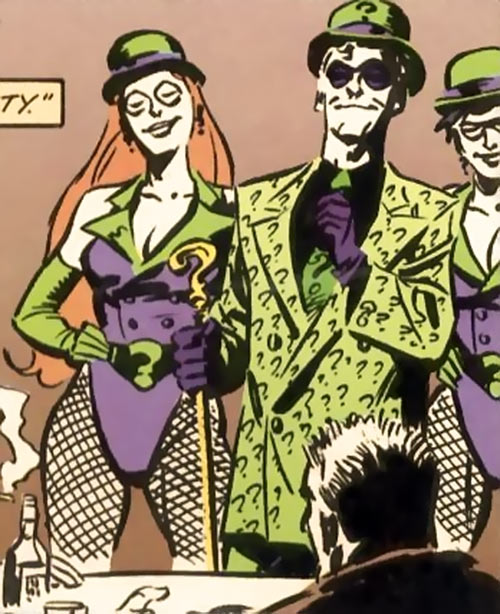 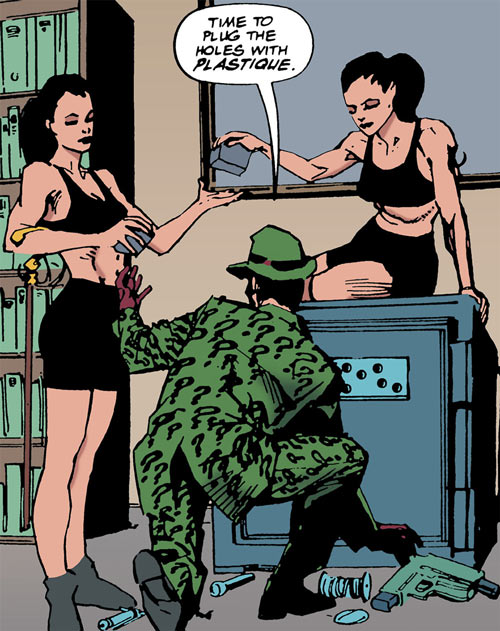 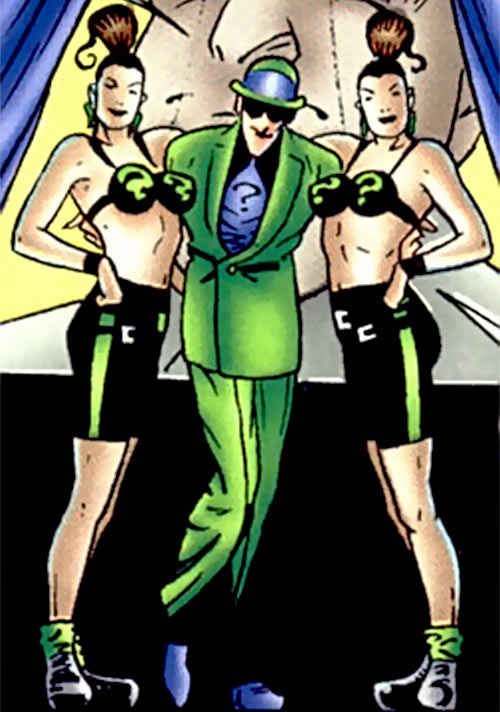