ED-209 is a heavily-armed police robot feature in the landmark 1987 movie Robocop. It’s not as sophisticated as it could be, though.

The fight between ED-209 (in all its 1987 stop-motion animation glory) and Robocop.

The ED-209 is a military grade combat robot. Its arms have no manipulative appendages, instead housing twin 20mm cannons and mini-missile launchers. ED-209 is much more fragile than it appears, having been built with a light frame to keep its weight and cost down.

This, in combination with ED’s large splayed feet, allow ED to walk on any surface strong enough to support a normal human being’s weight. It also means that anything punching through the armor that more or less holds the ED-209 together will demolish it.

Further design flaws have given the ED-209 an insane maintenance and repair schedule. Even EDs that receive frequent attention can malfunction without warning.

Omni Consumer Products (OCP) designed the ED-209 to become standard military equipment, to then get huge maintenance contracts from the government.

ED-209 had serious design flaws from its inception and was eventually replaced by the Robocop program, though some prototype ED-209s are still used by OCP. 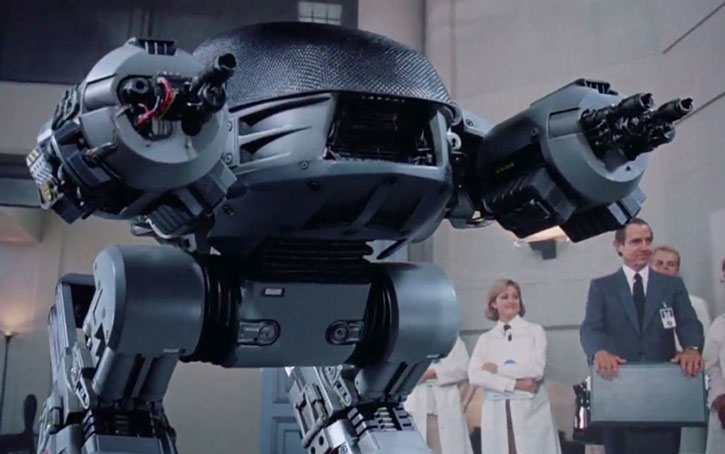 ED-209 has a two-legged “walker” chassis (such as the scout walker in Return of the Jedi).

None whatsoever. ED simply follows instructions to the best of its ability, which is not saying much.

He does have an impressive voice, a deep-bass monotone that booms out imperatives. The robot occasional roars in combat.

“Put down your weapon, you have 20 seconds to comply.”

“You are illegally parked on private property. Please move your vehicle. You have 20 seconds to comply.”

The ED-209 could be the product of any company engaged in advanced robotics, albeit in a half-assed manner. It ED-209 can be a threat to low-power PCs who encounter them without warning.

For a high-power PC group (or even a prepared low-power group) the greatest threat from an ED-209 is being near one when it explodes.

Equipment:
Mini-Missiles [BODY 01 DEX 05, AV: 05, EV: 08, Flight: 07. The missiles are fired out of launchers on ED-209’s arms, which each hold up to 6 missiles. ED-209 must use an Automatic Action to aim the missiles for launch. This action does not increase his accuracy, it simply allows him to designate a target. This is a classic case of the weapon being smarter than its user].

See Self-Link (Gadgetry) write-up for details on that Power. In summary, the ED-209 must be repaired like a Gadget and cannot heal on its own, is immune to Mental/Mystical powers, Character Interaction attempts and anything else that only affect living things, and is vulnerable to anything that affects machines.