Eda is an anime nun with guns characters, with unclear CIA ties. She may possibly be an undercover agent or she may be on the run from law. Either way she”s kind of a blank template that could be inserted almost anyway and thus a very useful character to flesh out campaigns in need of various “niche” characters.

Eda is well-connected, and is a very proficient gunwoman favouring a 9mm Glock handgun with an extended barrel. She might be a CIA operative, or a former CIA operative.

Eda is a member of the Church of Violence and may have CIA ties.

Eda usually sports a full nun uniform, as a Church of Violence member. In her civvies she’s an attractive, buxom blonde with very long hair.

Eda is remarkably greedy. Waving cash under her nose is very distracting to her. Generally she acts as something of a ditz and bored party girl during Spring Break.

(Referring to her setting up Green Back Jane so that she can “negotiate” her way into getting her US$100 counterfeiting plate) “That plan has worked four times out of seven !”

Roanapur is a very interesting setting. It could inserted whole into the DCU since we all know there isn’t all that much going on in Asia. Or the Black Lagoon Co. could reasonably be encountered anywhere in southern Asia.

In addition Eda could easily have connections to the Suicide Squad or Checkmate to make things more interesting. She could easily be the conduit (regardless of what motivation you decide to give her) for the characters entering Roanapur.

She could either be a rogue agent on the run or their secret contact to get the heroes involved. If you choose to make her the secret contact keep in mind that she may quite possibly have been seduced by a life in crime and may seek to secretly betray them later in the adventure.

Additionally she could easily be a SHIELD Agent or the like. These lower-level types of characters could easily fit into the world of Roanapur. Although you might want to tone down the level of technology as it might unbalance a Roanapur campaign as they mostly stick to modern day weaponry.

Equipment:
Glock 17L [BODY 04, Projectile weapons: 04, Ammo: 17, R#02]. Her primary weapons that she is almost always never without. While she is only seen using a single Glock, it should be noted that she does work for the Church of Violence who’s primary source of income seems to be smuggling military grade hardware so it is likely she has access to darn near any weapon she wants. Furthermore if she is a CIA double agent then assume that she has access to cutting edge surveillance equipment and the like.

It is unspecified whether or not Eda is still with the CIA. The above stats are for what is shown in the series and nothing more. If she is indeed an undercover CIA Agent then consider upping her skills appropriately. Up Dex and mental and mystical attributes by 1 and her HP total to 90.

As for her skills up Artist (actress) to 7 and all other skills by 1 point. Likewise feel free to give her any other Skills or subskills that she might need to reasonably complete her objective (whatever that might be.) Advantages and Drawbacks should look as follows:

Advantages:
Attractive, Credentials (CIA, rank unspecified, but medium should do in most cases), Familiarity (clergy rhetoric, the Bible, and CIA protocal), Intensive Training, Iron Nerves, Lightning Reflexes, Sharp Eye, Shtick (stance assessment and any other sticks you feel are appropriate). 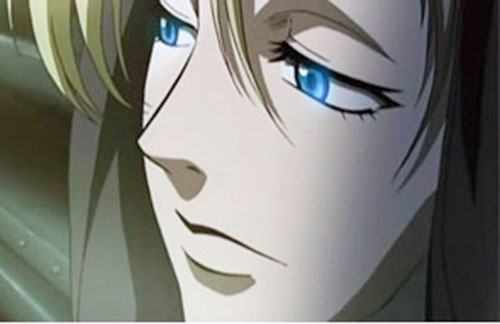 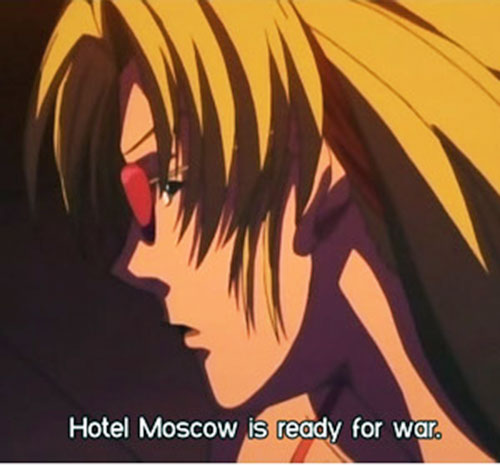 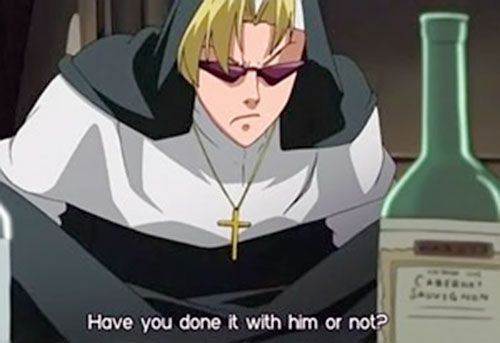 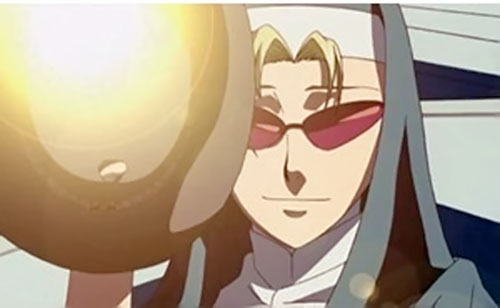