Edsel was a neophyte street fighter that possessed more courage and chutzpah than she did skill.

She was also a fair hand at automotive repair. She possessed enough skill to rig up a jury-rigged security system that prevented anyone other than her from starting her car.

Throughout the majority of the series, Edsel wielded the enchanted baseball bat, “Excalibur.” The weapons power was muted while in her hands, but it still proved to be effective against the group’s more mundane foes. While Mirth described the weapons effects to be “similar to a cattle-prod” it was clear that in her hands, the bat simply hit “hard”.

Outside of the bat, Edsel owned and drove a 1959 Corsair Model Edsel which was her pride and joy. Sadly the car outlived her, and was eventually passed on to Kevin.

It is unknown when Edsel first came to know of her greater destiny. But she clearly had an inkling before the story began. When she first appeared, she was already tailing Stanis the Grackleflint in order to keep track of his whereabouts.

Unfortunately for Edsel, Stanis proved to be too observant. Upon discovering her presence he lured her into a dark alleyway and promptly ambushed her.

Edsel did her best to fight off the supernatural creature, but was quickly overpowered and at risk of losing her life until Kevin Matchstick (and the wizard Mirth) miraculously appeared in the alleyway. The instant Kevin recognized the danger, he hurled himself onto Stanis and saved Edsel’s life.

Between Kevin’s might and Mirth’s magic, the two quickly defeated Stanis and forced him to retreat.

Even as Stanis retreated, Edsel turned to her saviours and and started fretting over the damage that Kevin suffered during her rescue. When Kevin gruffly rebuffed her attention and demanded to know who she was Edsel bowed before him and proclaimed that she was his servant. 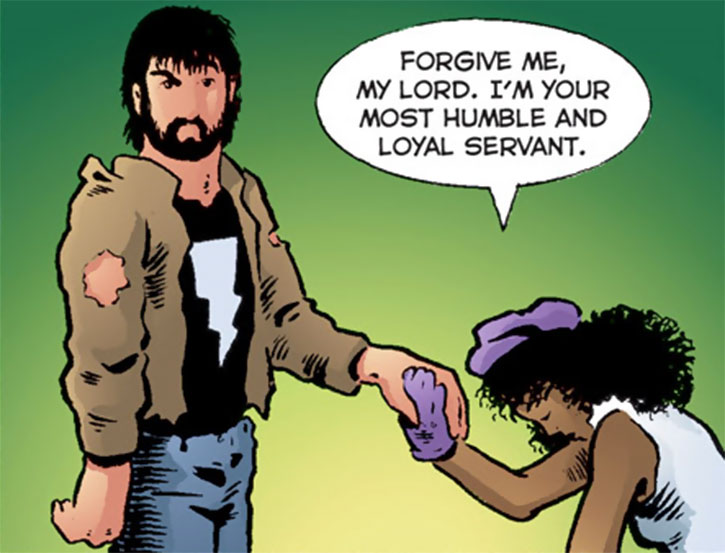 This both alarmed and shocked Kevin. When Mirth told him of Edsel’s peril, he had told Kevin that she would know him but it was clear that she had confused him with someone else.

Mirth defused the situation by distracting Kevin with the task of loosing Edsel’s car from Stanis’ makeshift trap. While Kevin was focused on freeing the car, Mirth informed Edsel that unlike herself Kevin was ignorant of his true self, and had yet to accept his destiny.

Edsel’s first instinct was to tell Kevin who he truly was, but Mirth’s words of warning convinced her that the had not yet come for him to understand his destiny. Moreover, she recognized the truth behind Mirth’s warning that she would be the cause of his knowing.

By the time Kevin had freed her car, Edsel had decided to keep the truth to herself and simply to act as a companion of sorts to Kevin.

The three then took a ride in Edsel’s car, ending up a local football stadium where Edsel and Kevin pondered the true nature of magic and life itself. Their conversation was rudely interrupted by a massive creature, the Malhaut Ogre, that was intent on murdering Kevin.

The Ogre focused the entirety of its attention on Kevin until Edsel surged into battle brandishing her glowing bat (that Mirth had enchanted on the way to the stadium). She rained multiple blows upon the Ogre until it grew annoyed and hurled her at one of the stadium walls. Mirth reacted quickly and reduced the force of her impact with his magic, but the resulting impact still rendered her unconscious.

Edsel awoke approximately a day later in the hospital. She was released into the care of her furious father who took her home and placed her under “house arrest” (he did so by simply taking the keys to her car). Edsel spent the next day at home, miserable and aimless… until Mirth suddenly appeared at her window holding her enchanted bat with a grin on his face. Without pause, Edsel climbed out her tiny apartment’s window and left her former life behind.

She then joined Kevin, Mirth, and their new ally Sean the Ghost at Kevin’s apartment where they sought to regroup. It didn’t take long for them to come under assault. Kevin was attacked in his bedroom by a Leanhaun Sidhe, an evil fairie whose power allows her to compel men.

As men, Sean and Mirth were helpless against the Leanhaun Sidhe – but Edsel wasn’t afflicted with that particular weakness. She stormed into the bedroom and brained the Leanhaun Sidhe with her bat. The distraction proved to be enough to break Kevin from her enchantment. Once freed from the Leanhaun Sidhe’s influence, Kevin made quick work of the evil fairy.

Realizing that the Leanhaun Sidhe couldn’t have been working alone, the allies (along with Mirth) quickly spotted her handler. They captured the unruly Grackleflint. When they pressed him for the truth in how the Umbra Sprite kept finding them, he revealed that they had found Kevin by simply looking for Mirth who’s magic made him the equivalent of a supernatural lighthouse.

Mirth, in his desire to safeguard Kevin’s life, abandoned the allies and retreated into the fairy lands, but not before imparting some words of wisdom in their ears.

With Mirth gone, the three allies decided to act on their own. Recognizing that the Umbra Sprite was seeking the Fisher King, they utilized Sean’s sight (limited as it was) to set up ambushes for the Grackleflints and their allies. The two groups played a cat and mouse game for several weeks.

Eventually, Edsel retrieved a laundry ticket from the remains of one of the Red Hats that the Umbra Sprite had employed to hunt the Fisher King. The ticket led the group to the Styx Casino, which they assumed was the Umbra Sprite’s lair.

Unfortunately, they were correct. When they infiltrated the Styx, Kevin was quickly captured by the Umbra Sprite and its forces. It was only Edsel’s quick thinking and Sean’s ghostly power that allowed the three to escape. However, Kevin had been poisoned by GrackleFlint venom.

The friends retreated back to Sean’s apartment, where Edsel left Kevin to contact Mirth in the Fairy realm. She hoped that Mirth could cure Kevin of his affliction. The two returned to Sean’s apartment just in time to witness Sean’s murder by Crum Cruinch, a powerful Dragon hiding in human guise.

With nothing left to do for Sean, the two retrieved Kevin and retreated deep into the lands of Fairy hoping that he would recover there.

Edsel spent the next year in Fairy waiting for Kevin to awake from his ordeal. When he eventually did, Edsel and Mirth informed Kevin of what had happened in his absence. The Umbra Sprite had murdered Sean and summoned creature after creature to search for the Fisher King. The three allies returned to the mortal plane barely a block away from the Styx. 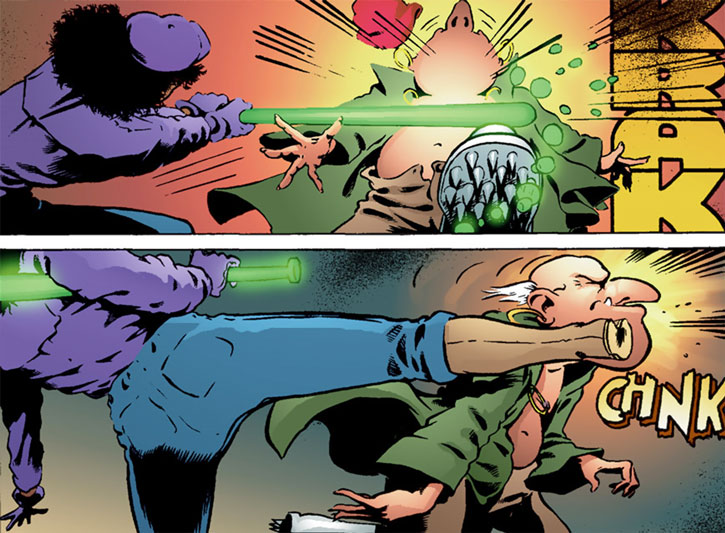 As they discussed their plan of action, they were ambushed by Rashem, an escaped inmate who was given an enchanted staple gun by the Umbra Sprite for the express purpose of murdering Kevin.

Rashem fired a flurry of shots towards the three allies. He destroyed one of Mirth’s artificial legs and would have shot Kevin if Edsel hadn’t interposed herself. The blast mortally wounded her, but even as she fell to the ground Kevin snatched her bat out of the air.

The bat lit up like the sun as soon as it touched Kevin’s outstretched palm and with a single swipe of the weapon, Kevin beheaded Rashem.

Edsel couldn’t see what happened then, but she felt Kevin’s gentle touch as he cradled her dying body. With the last of her breath, she begged Kevin to lean closer so she could tell him what he needed to hear. She told him, that in the same way it had happened many lifetimes before, she had merely held his weapon for him until he was ready to bear it himself.

For she was the reincarnation of the Lady of the Lake, he was once the man known as Arthur and the bat was his weapon; Excalibur!

With that Edsel peacefully passed away, for she now knew what Mirth had meant several weeks prior. Her death had proven to be the defining moment that caused Kevin to truly understand his destiny.

Edsel appeared to a be young black girl in her late teens. She possessed average looks, and jet black hair that hung in tight curls to her shoulders. Edsel’s physique was quite atypical to many comic tropes of the time; she was slender (but not skinny) with a small frame and bosom to match.

Like Kevin, Edsel wore the same outfit in virtually every scene. Her normal mode of dress included: a pair of blue jeans, a tight black tank-top and a pair of purple gloves and boots. She topped her ensemble off with a matching purple cap and purple jacket to boot.

Edsel would carry Excalibur about in a brown duffel bag; when in her hands it glowed with a emerald brilliance.

Edsel was a perceptive young woman whose personality was defined by her dry wit, her unyielding courage and her love for her friends. She was never at a loss for words and often proved to be the catalyst for action among her peers. As a form of affection, she often gave her friends pet-names (she always addressed Sean as “Spook” and Mirth as “Magician”).

Edsel truly loved two thing; her car and Kevin Matchstick (not necessarily in that order). Edsel loved the car so much that all her father had to do was take the keys from her and she would remain within their tiny apartment. Without the car, she didn’t feel the need to go out. Of course, that was before Kevin.

It wasn’t revealed exactly how long Edsel knew her true identity and fate, but from the first moment she laid eyes on Kevin she accepted her part in his larger destiny. She went so far as to take a knee before him and swear allegiance to him upon their first meeting (which utterly confused and flabbergasted Kevin).

When she realized that he had not yet fully awakened to his destiny, Edsel did her best to shield him from it until the moment that he needed to.

Edsel didn’t just attempt to protect Kevin’s soul, she also acted like his bodyguard (which was funny, since he was the invulnerable one). In combat, she was fearless and would attack creatures (the Marhault Ogre, the Leanhaun Sidhe, the Grackleflints, etc.) much more powerful than she was in order to protect Kevin. It was this fact that ultimately led to her demise.

(Upon first meeting Kevin)
“Forgive me, my Lord. I’m your most humble and loyal servant.”

“Can it Drapes ! I’m NOT gonna sit here and watch him belt it out with that thing ALL ALONE !“

“We’ve all looked death square in the eyes lately. We’re not afraid.”

Kevin: “Hey Eds, thanks for jumpin’ in earlier.”
Edsel: “Think nuthin’ Kevin. That was my d—”
Kevin: “Your what ?”
Edsel: “My De-lightful pleasure. ‘Nuthin’ like a good scrap.” 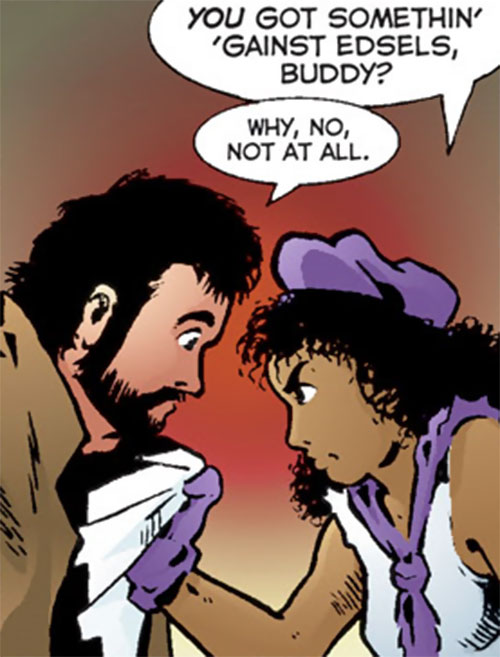 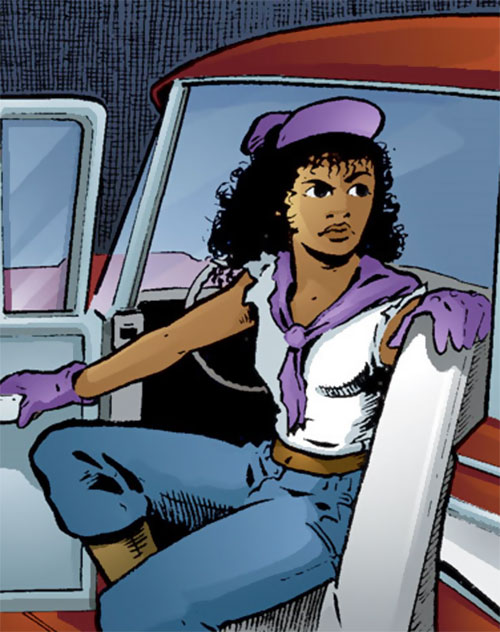 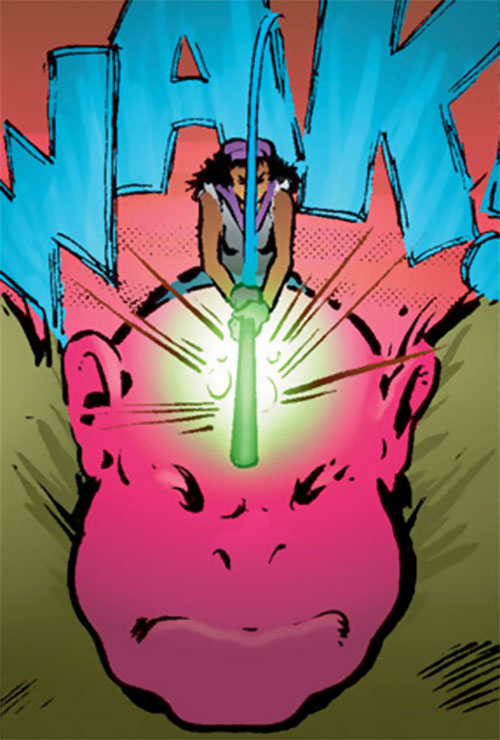 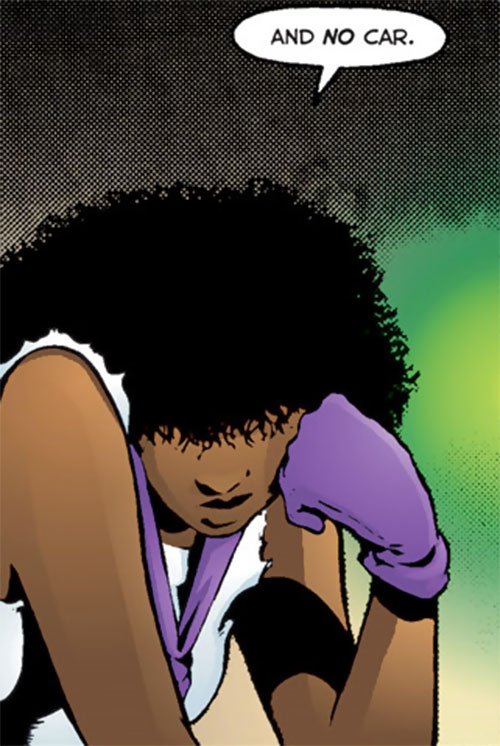 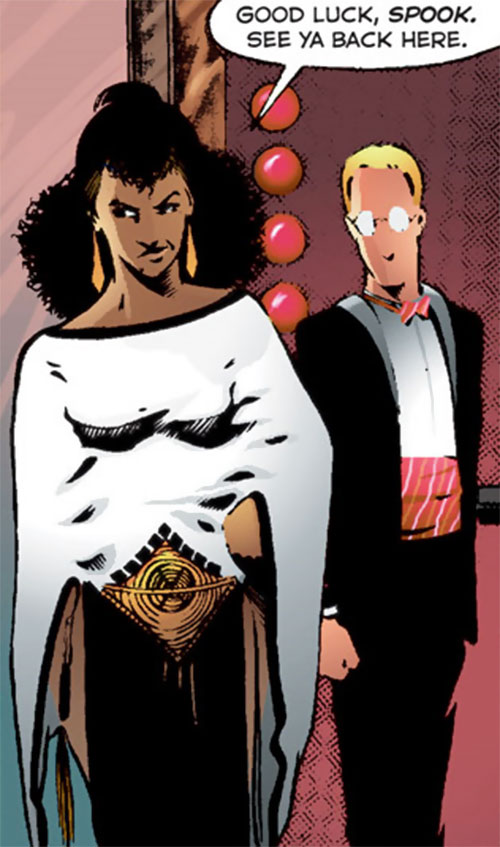 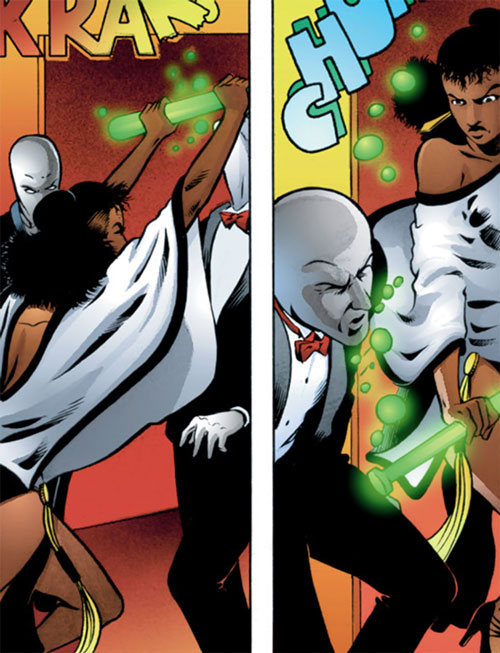