He was first seen in 1963 as a foe of the Human Torch (Johnny Storm), who back then headlined his own features.

The Eel is a good pick to fill the roster of a minor villains assemblage in stories set during those decades.

Mr. Stryke is knowledgeable about marine biology, though he doesn’t seem to have formal qualifications in this domain. He’s a skilled caretaker for many sorts of sea life, with a rare level of expertise.

He’s also skilled at building and maintaining large aquariums, which involves a set of complex skills. His forte among those is electrical work.

This loosely suggests that the Eel may have served in the military. 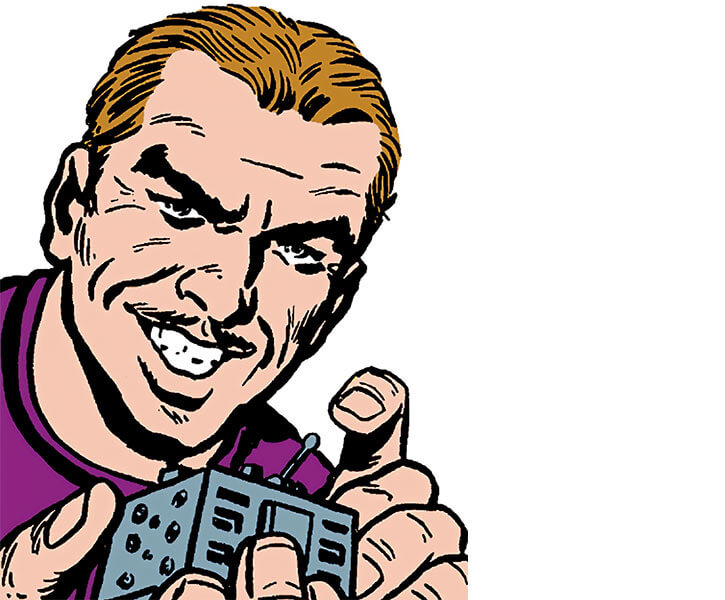 This version wasn’t seen for long. It was greased to escape from holds, and could shoot lightning from the gloves.

Secondary sources  mention that the Eel costume has electrical insulation. The Mk3 is a natural step for this feature to appear. 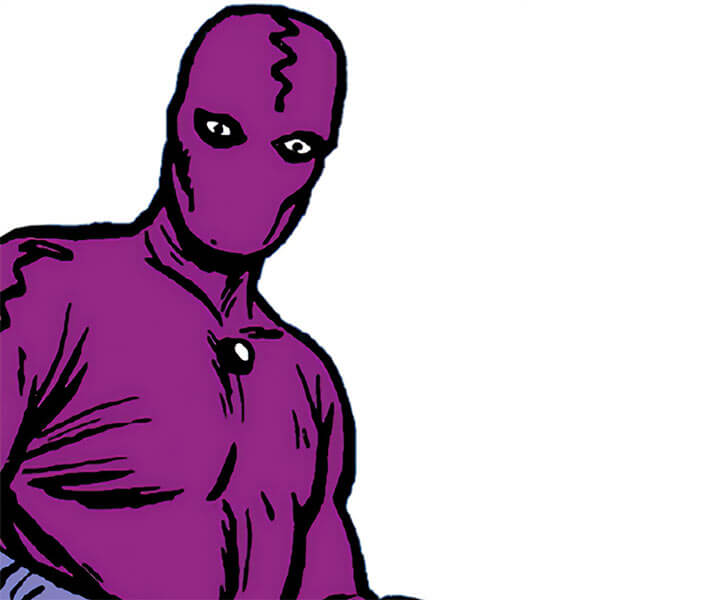 This is also the point where the Eel starts being depicted as an acrobat.

It seems possible that Nefaria scientists helped with the upgrades.

The best-known one. It’s true blue and eggplant, with jagged motifs on the sides of the limbs and mask.

One variant came in heather (dark grey/purple) and light blue.

It seems similar to the Mk5, but :

During his first public outings, the Eel had a customised light helicopter. It had :

It vaguely resembles a modified OH-6 Cayuse  . Which might work if this model was built a bit earlier in the Marvel Universe than in the real world.

The helicopter was apparently confiscated in 1965.

To my regret, nobody ever called it the eelicopter. 😾

During his first public outing, the Eel used the freshly stolen “aqua-attractor gun”. This pistol could draw large masses of liquid water from clouds, or even from the ground. But the Torch destroyed it.

In 1973, the Eel was issued a lightning rifle by Cobra (Klaus Voorhees). The “Eel cannon” could blast a man-sized breach through a typical cottage’s outer walls.

Mmm, all that comes spontaneously to mind is jazz. And it’s not stuff that would scream “1963” to most.

Heh, why not Dionne Warwick   ? It’s more of a chronological marker. And it was #5 on the R&B charts of the days. These had previously been the “race records” charts, but it was changed in 1949 to have White people buy them too.

He apparently had a lot of authority on the day-to-day running of these facilities. He therefore was able to modify parts of the building in secret.

I shall become… an eel

Unfortunately, his goal in life wasn’t to educate the public about the sea. It was to become a dreaded criminal menace.

Stryke developed the identity of the Eel, with a greased and electrified costume.

His first morays… err forays as the Eel were discreet and successful. He then sunk these earnings into a special helicopter. And a secret helo hangar with remote-operated camouflaged doors, built in the Ocean View complex.

(He must have been a *huge* Whirlybirds fan.)

Running up that Eel

The Eel raided the labs of one Professor Lawson. However, one of the devices he stole was essentially a miniature atomic bomb. It would detonate at some random point.

A major manhunt was thus launched to find the Eel.

Stryke abandoned the bomb in a forest. But the Human Torch (Johnny Storm) then intercepted him.

Storm narrowly won. He then stretched his powers to their limit to funnel the heat and blast from the bomb upward. 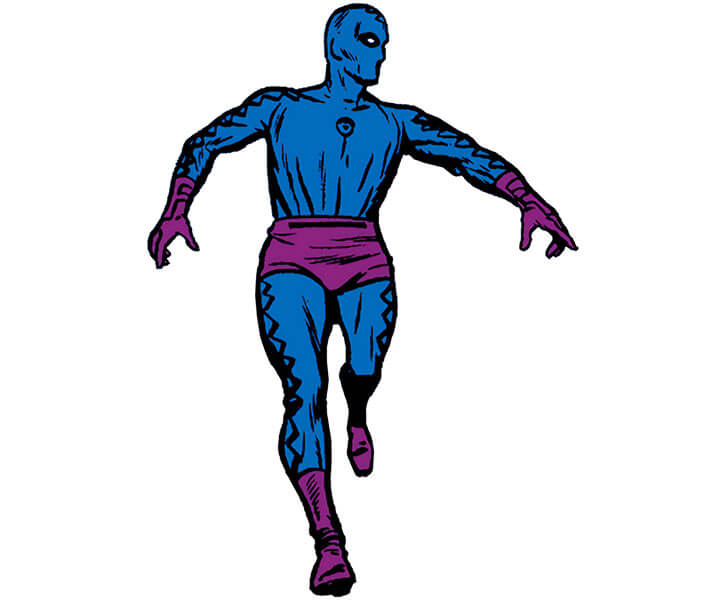 The Eel left prison in 1964, on good behaviour. The aquarium even hired him back, since he was too difficult to replace.

But the Eel promptly stole a rare stamps collection in town.

He then tried to steal a big ruby. This was a trap set by the Torch, but Stryke escaped.

Johnny Storm then visited the aquarium. The Eel panicked, wrongly thinking this was part of a plan to trap him. Though the Eel nearly killed the Torch, he was vanquished and captured.

What’s the time, it’s time to get Eel

Stryke’s hidden helicopter still hadn’t been found. In prison, he cobbled together a remote control, summoned his vehicle, and escaped.

Days later, he used his helo to free Electro (Maxwell Dillon) from prison and offer an alliance.

They went for a themed blackmailing scheme. Both having electrical powers, they threatened to wreck New York City’s power stations unless paid millions. But Spider-Man (Peter Parker) defeated them using a gadget built to stop the Vulture (Adrian Toomes).

However, the enthusiastic but inexperienced intervention of Bluebird (Sally Avril) allowed the charged ne’er-do-wells to escape. Electro then dissolved their partnership. 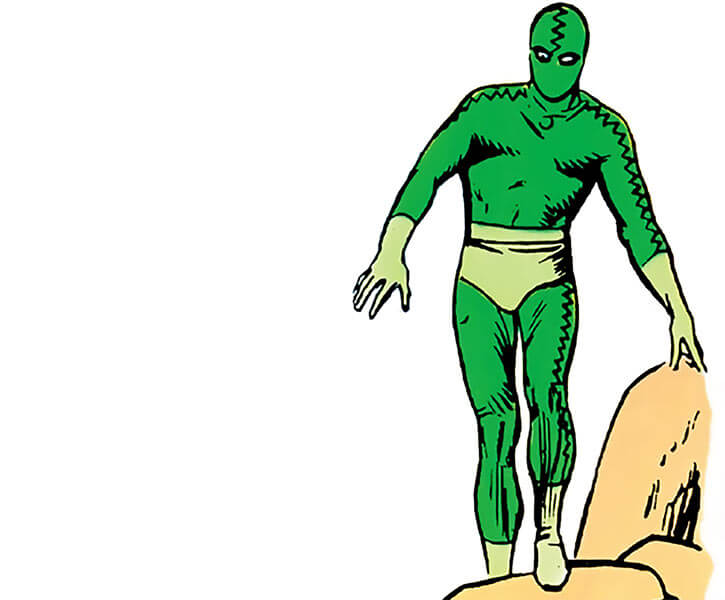 In 1965, Mister Fear (Zoltan Drago) used his fear gas to force the Eel and Ox (Raymond Bloch) to become his henchmen.

This marked a turning point. With this “Fellowship of Fear”, the Eel started his career as a jobberWrestling slang for a wrestler who almost always loses with minor teams of costumed villains.

(One could always imagine that Drago’s fear gas left Stryke permanently diminished, and less competent. But that isn’t present in the actual material.)

The Eel was then among the throngs of super-villains hit by Doctor Doom (Victor von Doom)’s emotion manipulator. These attacked the Storm/Richards marriage.

The villains were defeated by an army of heroes, and Reed Richards used a time displacer to undo these events.

The next team, in 1966, was assembled by Count Nefaria for his grandiose scheme against the White House.

It sported a roster most heteroclite :

The team performed well against the X-Men, and struck a notable blow against mutant/human relations. But the plot was ultimately defeated when Professor X (Charles Xavier) entered the fray.

Nefaria’s henchmen, who had been plotting to betray him, ended up fleeing.

The Eel is on, on the street

Egghead (Elihas Starr) then went for his own big-time blackmail scheme. Beyond the Eel, he recruited :

They deployed a nuclear missile aimed at Manhattan. This was done in Canada, under the notion that Canada had next to no super-heroes who might respond.

But the earliest version of Alpha Flight intervened. Though they lacked experience, they defeated the scheme.

Run to the Eels

Stryke’s next known employer was the Cowled Commander (Roger Muldoon), in 1973. He hired the old Nefaria team, minus the Unicorn, plus the Viper — Jordan Dixon, Leopold Stryke’s brother.

(This team is sometimes called the Crime Wave in secondary sources.)

They combined their powers for a crime wave through New York City. They clashed with Captain America (Steve Rogers) and the Falcon (Sam Wilson).

Though they didn’t perform badly, it was because they were carried by Plantman. The Commander and his goons were swiftly defeated once Plantman was taken out. 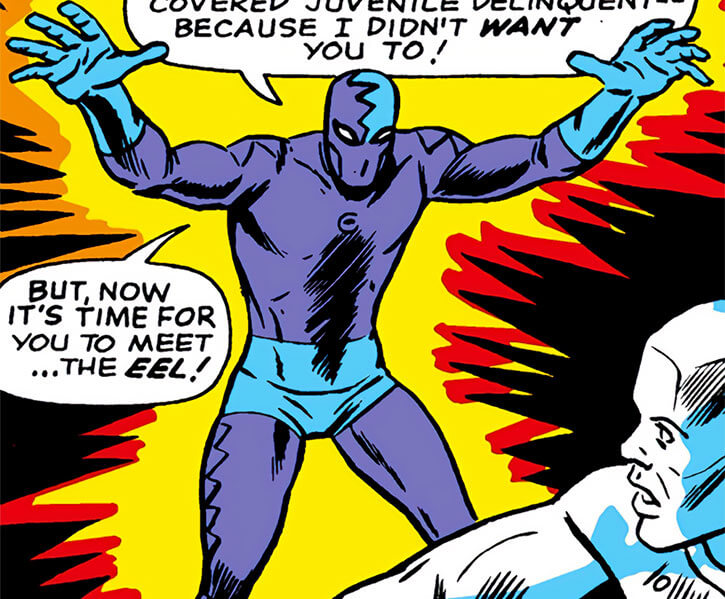 The brothers soon broke free from prison. The Cobra (Klaus Voorhees) had slipped them spare costumes, and recruited them to become his Serpent Squad.

But it was the brothers who convinced him to attack Captain America and the Falcon in revenge. And Eel who convinced the other two to go with frontal attacks.

(Why a guy named the Eel was in the *Serpent* Squad remains one of the greatest unsolved mysteries of the not-written-by-Chris-Claremont Marvel Universe.)

The Squad had to retreat after their first attack, even though the Eel badly burned Captain America’s hands when Cap grabbed him. However, the second attempt also failed, and the Squad was captured.

The Squad was still jailed at the Virginia State Pen in 1975.

When the Viper was transferred away, he was secretly murdered by the former Madame Hydra (Ophelia Sarkissian).

Sarkissian also sent her henchwoman Princess Python (Zelda Dubois) to free the Eel and the Cobra.

The four formed a new Serpent Squad under Sarkissian. She took the Viper identity. Ms. Sarkissian told the Eel that his brother had been killed by cops, and that she was taking the name in his honour. 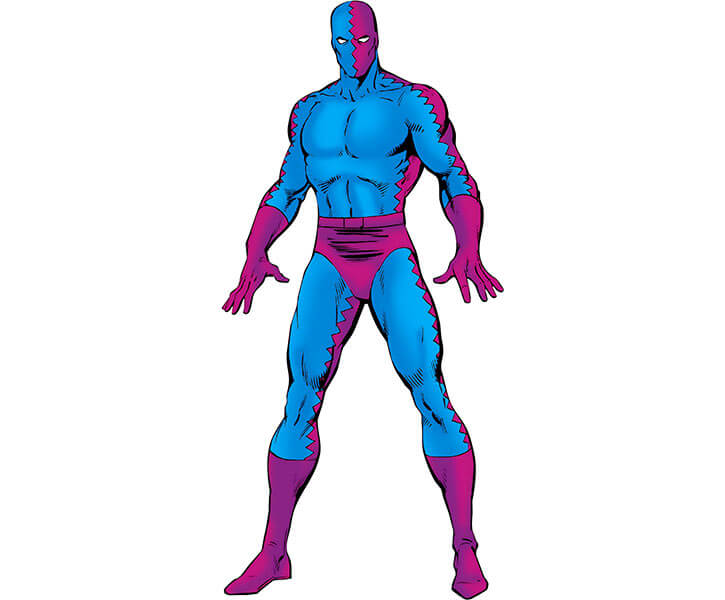 This new Squad captured Hugh Jones, the Roxxon Oil CEO, despite the efforts of Nomad (Steve Rogers). A fantastic attempt to raise the sunken continent of Lemuria ensued.

But this time, Nomad stopped them. Eel and most of his colleagues were arrested by Roxxon security men.

Stryke presumably escaped, as he was free by 1976.

However, his morale had taken a bad hit after the death of his brother, and his long series of defeats. He and his depressive friend the Porcupine grew interested in the Celestial Mind Control movement.

This cult-like movement could supposedly teach the secrets of self-confidence. Stryke and Gentry applied, along with a reluctant Plantman.

Plantman soon left. Stryke and Gentry stayed long enough for the secret master of the CMC — the alien Nebulon — to brainwash them.

Nebulon deployed the disposable duo to delay the Defenders. They ran a successful ambush using Porcupine’s sleep gas quills. But ultimately they were far outmuscled.

The CMC was eventually ended by the Defenders. Nebulon left Earth. The Eel was arrested in unclear circumstances, and jailed for a month or two.

A few months later, Leo Stryke was in California. His parole officer had strongarmed him into applying as a marine life expert for a Hollywood contract.

He got the job, advising the makers of a special episode of the cheesy Stuntmaster TV show.

Frustrated by his lack of money, the Eel also took a lucrative contract from the Enforcer (Charles Delazny, Jr.). He stole a disintegration machine prototype.

However, another mercenary was on the case – the Gladiator (Melvin Potter).

The Gladiator tracked down the Eel. When he realised that Stryke no longer had the prize, Potter murdered him.

(The Eel no longer had the device since the Enforcer had taken it whilst the Eel was unconscious. Which, unbeknownst to the Gladiator, meant that the contract was now closed.) 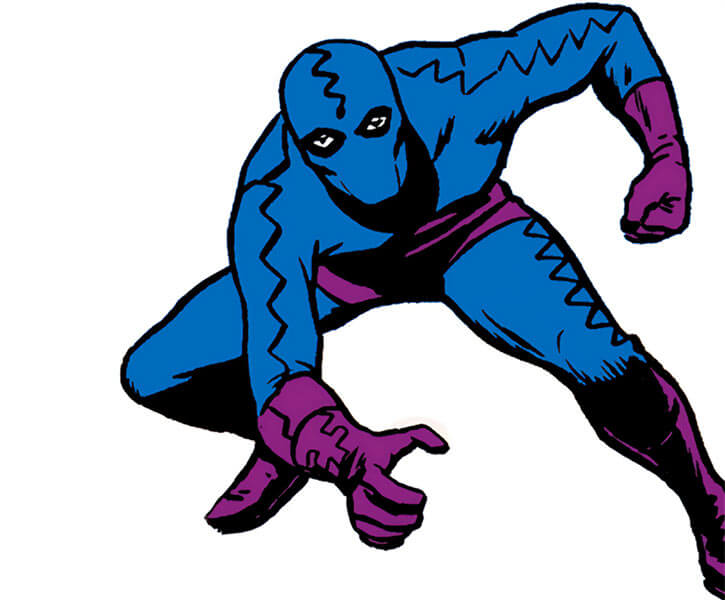 The back of the 1970s costume is mostly eggplant, and the front mostly blue. That’s unusual in super-hero costumes.

The Eel was on a specific power trip fantasy. He would dress up as a super-villain, have strange powers, and be an unstoppable, dreaded, cunning thief and menace.

He had the usual bombastic, articulate Stan Lee lines – but without the megalomania option.

He loved to boast about his costume’s capabilities, and tried hard to project the image of a masterful foe.

Part of it was not striking women. And I suspect that his moustache was an attempt at Erol-Flynn-like swagger.

It didn’t really stick, though. Stryke never had the “it” charisma he so craved.

His bitterness followed the curve of his dwindling finances and mounting jail time. 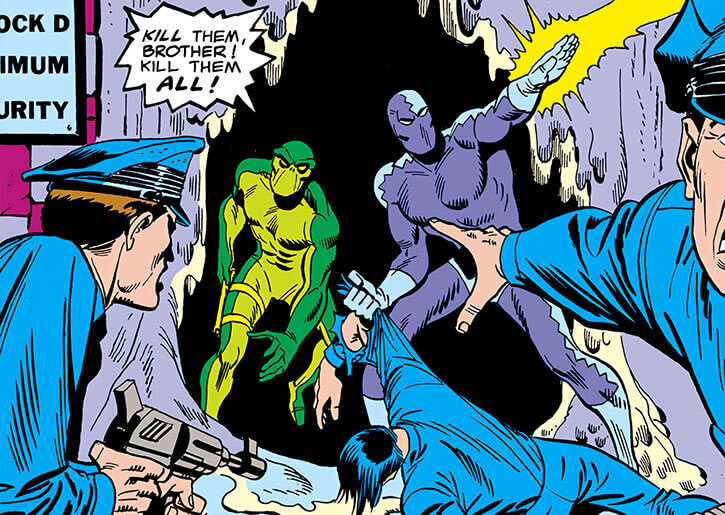 The “aqua-attractor” boiled down to Water Blast: 06, but required that enough water to be present in the environment.

For his suit, I find Snare easier to model (in terms of OV/RV and RAPs) than Paralysis. Its outcomes are more predictable.

Some of the numbers for the suits are inferred, since the Eel doesn’t demonstrate every capability every time. Lightning Immunity in particular doesn’t appear in primary sources. Neither does the facial protection Enhance.

Wealth numbers have varied over his career. It started a 005 and ended a 003, more or less.

No Animal Handling Skill. Neither Subskill really matches his work — especially Riding ! An Expertise is a better fit.

The Mk6 costume arguably has higher Lightning EV. But the two cases where it hits real hard seem to be :

The Eel escapes from prison a lot. It’s not usually shown, but he routinely pops back up a few months after having been arrested (publication time).

You could thus make a case for escape artist Skill APs and prison break knowledge (Expertise ?). It would be pure inference, but it matches the “slippery” theme.

One scene gave me the vague impression he might have a mini-rebreather in a hidden pocket, for impromptu diving. It’s far too speculative, but it could be an idea for a game.