The tengu are spirits in Japanese folklore.

They play many roles in many stories. Their appearance, morality, powers, etc. vary a great deal depending on the region, the era, the intended public… The 天狗経 (“Book of tengu”) of the Edo era described no less than 48 different kinds.

This specific kind of tengu appeared in The Outsiders Vol. 1 #8, published in 1986. I guess they would be karasu tengu (烏天狗) – small, bird-like magic people.

They don’t have a specific name – but they love eggs. So let’s call them “egg tengu” to tell them apart from other sorts of tengu. It’s either that or “Tengu Clan 1986”.

These tengu are about the size of a large, fat corvid. However, a small murder of them — between 4 and 6 — is surprisingly efficient at tripping, distracting and harassing human-sized people.

They do not seem particularly durable. Egg tengu fear ordinary weapons such as pistols. OTOH, they are highly resistant to mental control.

They can fly like crows do, or simply levitate in a sitting position.

Egg tengu speak Japanese – quite possibly an older form of the language. Yet anybody can magically understand them, even if their Japanese vocabulary is limited to “Naruto” and “Godzilla”. 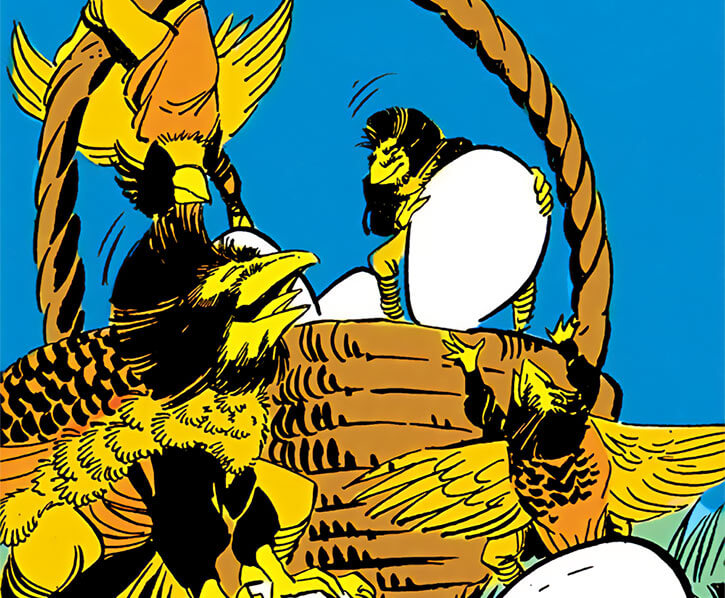 Egg tengu can perform magic. But this is something they need to prepare beforehand. They can’t just cast spells as needed. 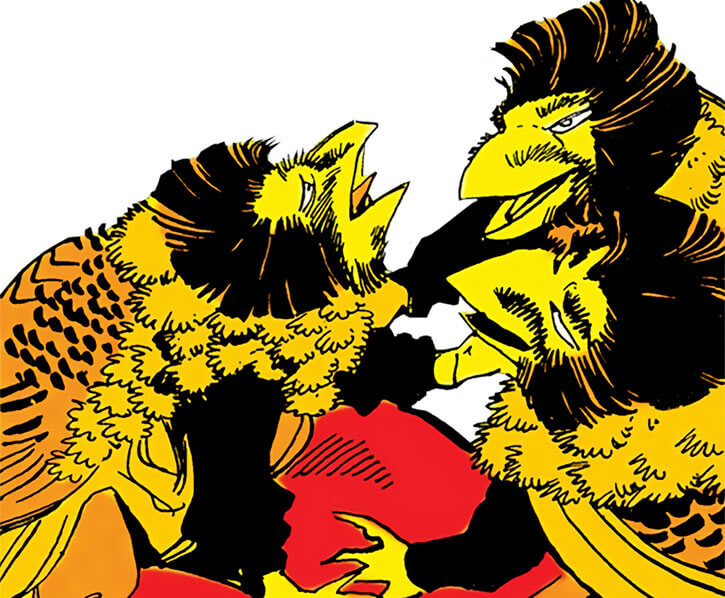 These tengu live in an unspecified Japanese forest. Maybe in the Daisen-Oki national park   ?

Apparently there was a secluded monastery near their place. However, it is possible that the monastery was but a magical illusion.

The tengu leader mentions that they travelled away from the “world of men” for a long while. Perhaps they took refuge in another dimensionOther realms of existence that are not our universe. There’s an implication that they had fled in fear of Kintarō, but wouldn’t admit it.

(Kintarō (金太郎) is a sort of super-hero who features in many traditional Japanese tales. He has often fought tengu. There are still many references to this popular character in festive traditions, animé, JRPGs, etc.).

We only see a dozen egg tengu. This may be their entire population. Perhaps this “species” is something closer to a single family.

The tale of the prideful oyabun

In 1986, the tengu tricked the Noguri yakuza clan. How they came into contact is unclear.

I suspect that the Noguri oyabun (the mob boss) was investigating possible sources of supernatural power. To take his revenge against Katana (Yamashiro Tatsu) and her magic sword.

Noguri-san thought that he was forcing an old monk to deliver him a captive egg tengu, lest all the monks be murdered. But the “monk” was the magically disguised egg tengu leader. And the caged egg tengu was a willing accomplice.

The oyabun sacrificed a minor hireling who displeased him. This man was possessed by the “captive” tengu. He then went on to attack Katana while she was staying in Tōkyō. Of course, the thug didn’t stand a chance and was slain.

This was the point. Having the host killed meant that the possessing tengu’s essence was now held within Soultaker, Katana’s magic sword.

The egg tengu then cast a spell that projected their soul into Katana’s body. Katana’s soul thus took the tengu’s place within Soultaker.

However, the possession went bad. The tengu piloting Katana’s body became violent and vicious. They eagerly served as an assassin for the Noguri, in a plot to bring other yakuza families under Noguri control.

Halo (Gabrielle Doe) and Looker (Lia Briggs) of the Outsiders attempted to stop Katana. They failed, but could telekinetically snatch Soultaker. From within the sword, Yamashiro’s soul told Gabrielle what to do.

Looker and Halo therefore brought a basket of fresh eggs into a remote forest.

Though it took a while, it did reel the egg tengu in. They love touching and hugging eggs. Perhaps they think this symbol of life brings them luck.

The plan was to use Looker’s illusions and Halo’s sunlight aura to pretend to be Kintarō. This attempt at intimidation didn’t work, but it intrigued the egg tengu patriarch. He soon agreed to help (and recover the possessing tengu, who was going mad).

(The patriarch is called Tengu-Suma in the story. I *think* it was meant to be tengu-sama, with “-sama” being an honorific roughly meaning “the respectable important person”. This may also imply that egg tengu don’t have given names, or hide them for magical reasons.)

Yamashiro will have her soul revenge

Halo, Looker and the egg tengu attacked the Noguri clan. The tengu managed to yank the possessing tengu out of Katana’s body. This freed her just in time to defeat the Noguri boss.

She chose not to kill him. The clan had been publicly defeated by three women and some flappy birds, and had thus lost much credibility.

On the last page of the story, one egg tengu is seen hitching a ride on a passenger jet to come visit the USA. 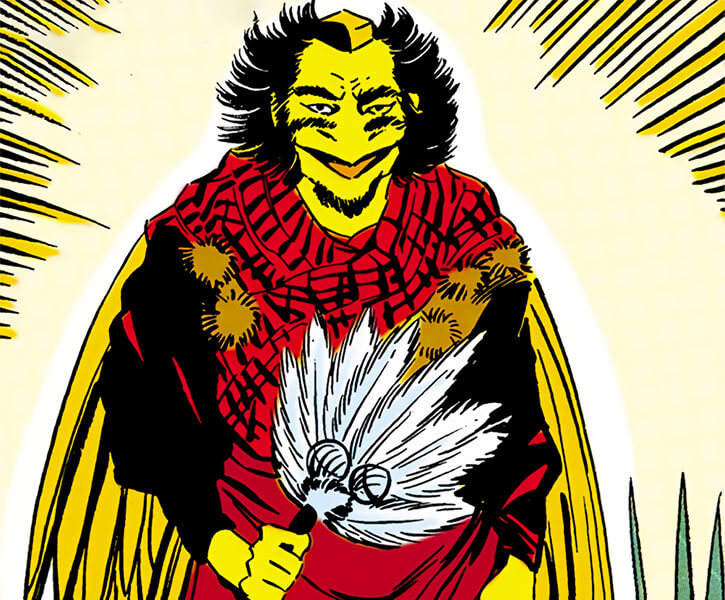 The tengu leader was much larger, and more clearly humanoid. Perhaps he’s an adult and all others were children.

The leader *might* be the sort of tengu who’s a master of swordplay (or another martial art), and perhaps an instructor. But it seems more likely that he was an illusionist wizard.

The art in the comic is likely inspired by depictions of tengu by Hokusai  , a super-famous painter of the Edo era.

If told some interesting/cunning tricks are going to take place, they’ll probably be unable to refrain their curiosity.

They’re not particularly courageous, unless they have a well-laid plan and prepared spells. Yet to Katana’s surprise they attacked an illusion of Kintarō. Perhaps they resented their long exile too much, and blamed the folk hero for it. 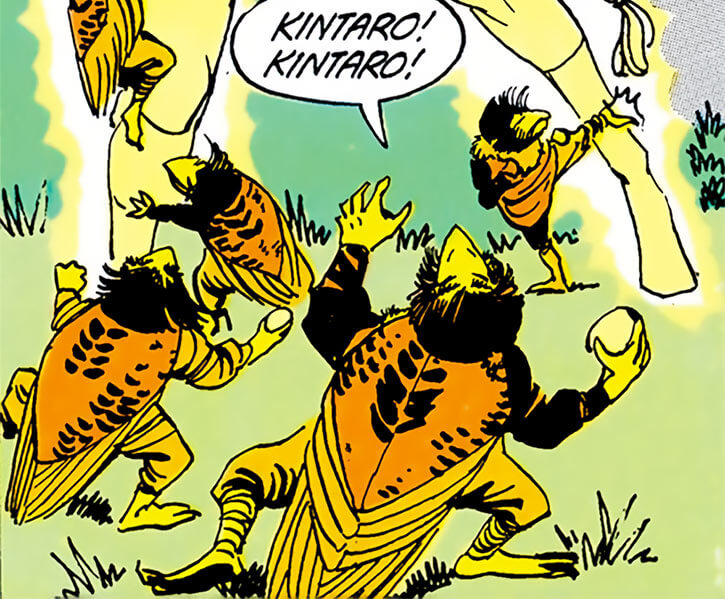 The Personality Transfer Ritual used by egg tengu has a hefty bonus (+4 ?) that only allows one resistance roll per day.

One of their Rituals duplicates the Life Support (Thin Atmosphere) Advantage for 24 hours or so.

They have a Neutralise Ritual that can be used to break an egg tengu possession. It was done by a small crew within maybe two Phases, and may have involved Components. It looked like they were physically dragging the immaterial possessing tengu out of the victim’s chest.

They seem to have a large repository of Rituals they can use in their tricks. These presumably include a lot of invisibility and illusion spells.

The -6 STR thing is because it took two egg tengu to carry Soultaker. However, the weight of melee weaponry is routinely overestimated in fiction. So maybe Soultaker was assumed to weigh more than that by the writer and/or artist.

Most of the time, they Team Attack to do Wrestling Combat Manoeuvres. Unlike most nameless characters, they can conduct Team Attack whenever they want (and they normally do).

Source of Character: The Outsiders Vol. 1 #8.