Eightyfive has strong control over magnetism. That allows him to manipulate metal with his mind, shaping it to his will.

He also uses his magnetism to allow him to fly.

A pink-skinned Kree, Eightyfive was born a slave to the blue-skinned Kree. His family was killed before he managed to escape captivity. Thus, he took the number of the cell block they had been held in as his name. Escaping, he was recruited into Force by Interface.

When Interface learned of a sacred shield which supposedly bestowed great power on its wielder, he led Force on a search for the shield.

They eventually tracked it down to a planet. The computer running this world, Main Frame, forced them to compete against another team that had been searching for the shield, the Guardians of the Galaxy. Eightyfive faced Aleta, sealing her within a coffin of metal.

Initially planning to leave her there, he reconsidered. 85 was uncomfortable at leaving even his enemies confined.

With the other contests resulting in draws, the final contest came down to Interface versus Vance Astro. Interface easily subdued Astro. But when he seized the shield, he didn’t understand that its ’power‘ was symbolic. Interface was so caught up in trying to access the power that Astro managed to take it away from him.

Losing due to his motives rather than the contest, Interface, Force, and their ship were teleported 15 parsecs  away by Mainframe. Seeing no benefit in returning to challenge Mainframe or the Guardians, Interface ordered them to move on to other possibilities.

Pleased to meet you…

When Force were attacked by Malevolence, their resistance was easily dispatched, apart from Brahl, who happily made a deal with Malevolence. She declared them her slaves, using her power to keep them in line, and assigning Brahl as their new leader.

Malevolence led them to Homeworld, centre of the Universal Church of Truth. There she challenged for the role of matriarch to Protégé. When Malevolence sensed the Guardians, with her main rival, Aleta, approaching, she dispatched Force to delay them.

Force attacked the Guardians on board their vessel. Eightyfive was attacked by young Guardian Replica, who revealed herself to be a Skrull when she realised he was a Kree. He was unable to battle her ferocity, and was soon at her mercy. Martinex convinced Interface to call a truce, and her team mates talked Replica out of killing Eightyfive.

However, Brahl fled to tell Malevolence of their treachery.

… hope you guess my name

Joining forces, Force and the Guardians travel to Homeworld to confront Malevolence. She convinced Protégéthat they were coming to harm him, so he dispatched his elite guards, forcing them to use their powers in his presence. The battle stopped when Starhawk reabsorbed Aleta and left, allowing Malevolence to win by default.

Force and the Guardians were spared when the Guardian, Replica, herself a Universalite, begged Protégé for their lives. He acceded, banishing them from Homeworld.

Slightly flamboyant, Eightyfive can appear bitter and hardened. However is not at heart a killer, and has a particular dislike of imprisonment, preferring not to leave his enemies trapped by his powers.

He’s loyal to the group, seeing them as the only family he now has.

“Please allow me to introduce myself, fair lady ! The name is Eightyfive – absolute master of magnetism ! My diminutive associate here is called Tachyon ! We are to be your executioners !”

A Braalian who spent his early life in slavery, after his family were abducted by Sklarian Raiders and sold to a Dominator colony.

Force have clashed with the Legion of Super Heroes on a couple of occasions, most recently when Brahl manoeuvred them into fighting as part of a plan to gain revenge on Phantom Girl. Brahl was expelled from the group as a result.

Bonuses and Limitations:
Flight and Metal Manipulation are Contingent on Magnetic Control (-1). 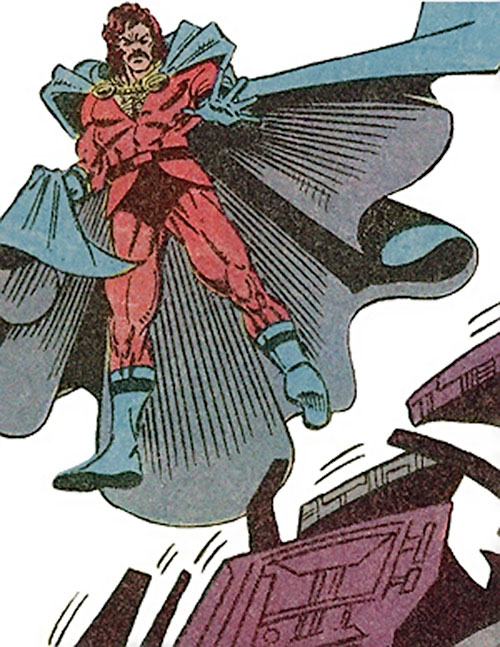