Thanks to Energy X, Ramirez has the ability to generate intense flame and use it for a variety of purposes. He can :

Ramirez is also the former leader of a street gang, and is quite competent at hand to hand combat. Though he has not demonstrated the use of any thieving abilities, his origin makes it likely he still possesses them.

As the gang leader of a street gang in the Barrio of Patriot City, Ricardo Ramirez was suddenly engulfed in Energy X, which caused him to burst into flames.

Ramirez first used his powers to fly above the city, making him realize for the first time how large and grand the whole of Patriot City was. This in turn inspired him to reflect on Estella’s earlier comments about the pettiness of his gang’s brutal fights to control their small barrio. He returned, and used his powers to end the gang fight.

Taking the name El Diablo, he teamed up with Mentor and Minuteman, and later Man-Bot, to form the initial core membership of Freedom Force.

A relatively stocky, muscular young man, Ramirez normally wears a blue tunic with a high red collar and flame motif along the bottom and the edge of its sleeves, a red mask tied around his face with his hair flowing free, and blue pants. His blue boots have red trim, and he wears a red sash around his waist.

Covering the knot of the sash is a yellow shield with a black trident symbol on it.

Cocky, arrogant, and self-absorbed are among the nicer attributes associated with El Diablo. He believes he is God’s Gift to Women (though they prefer to think of him as God’s Gag Gift to Women), and is confident in nearly everything he does. 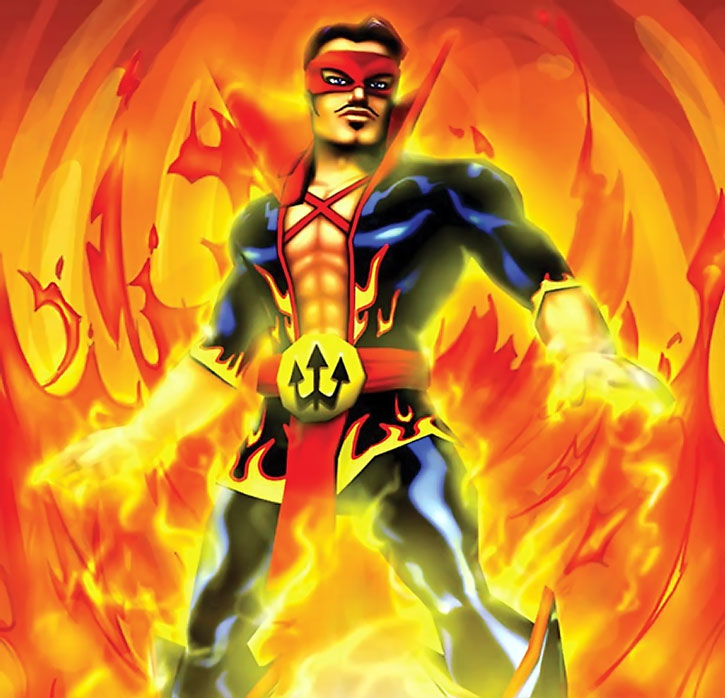 However, he is a good man, and easygoing under most circumstances, ready with a quip or joke under stress. Once combat begins, however, his fiery temper can sometimes escape his control, and he ends up doing considerably more damage to the surroundings (and his enemies) than intended.

To sum it up, he thinks he’s the stereotypical “hot-tempered Latin Lover”, and while he does have some charisma, he is not the Don Juan he thinks he is.

(Consoling Minuteman after Mentor berated him for complaining) “Stop right there, Señor. You already saved Patriot City from a nuclear holocaust. Don’t be so down on yourself, mi amigo.”

(During an Easter Egg – a hidden basketball court) “If this doesn’t go in, I’m gonna torch the backboard, I SWEAR !”