El Muerto used to be a professional luchador. He remains a competent brawler, wrestler, athlete, acrobat and martial artist.

In order to cultivate his mysterious image he has practised his stealth skills so he can appear seemingly from nowhere, “like a fantasmo”.

El Muerto’s superpower is that, being already dead, he’s very difficult to hurt. He is immune to small arms fire (the bullets just bounce off him). I assume that he would be able to recover from more massive damage that actually can hurt him.

There are also hints that he has a small degree of superhuman strength. He can lift large tables and the like.

Pablo Valdez comes from a poor Mexican family, and likely grew up in the Mexico City area.

As an adult, he became a masked wrestler, apparently gaining some popularity on the lucha libre circuit. Becoming a greater-than-life luchador may have been inspired by his admiration for Superman, a cult of personality that drove him to be a hero and good guy.

During a major earthquake in Mexico, Valdez did his best to help rescue victims. But he ended up trapped by a cave-in with a young girl. Certain his idol Superman would come and save them, he managed to keep the girl alive – but Superman never came. The girl lived until she was rescued by rescue workers, but Valdez paid for his idealism with his life.

Under unclear circumstances, Valdez came back as the undead hero El Muerto. Apparently still wearing his old wrestling costume, he added a face covering patterned after the one worn by hanged men in Mexico.

Although very bitter toward Superman and by extension other gringo heroes, he worked as a street super hero throughout Mexico City. He occasionally teamed up with the other local crimefighters, such as Acrata and Imán.

In 2000 El Muerto, Acrata, Iman and Superman teamed up to defeat a supernatural menace conjured by the sorcerer Duran in Mexico City. During that crisis, El Muerto finally spoke with Superman. He thus came to terms with both his original hero worship and post-mortem hostility toward the Man of Steel.

El Muerto is dour, mysterious and dedicated to the people of Mexico City. He prefer to appear, do his job and disappear.

He seems to be both a hero and a patriot, resenting foreign interventions on Mexican soil.

“You don’t need to show off, gringo. We speak English better than you speak Spanish.”

Bonuses and Limitations:
Invulnerability and Regeneration are both Contingent Upon Animate Dead.

Drawbacks:
MIA toward Protecting the Citizens.

Source of Character: Superman v2 Annual 12 (“Planet DC” crossover in 2000). So, no, it’s not the Hernandez character. 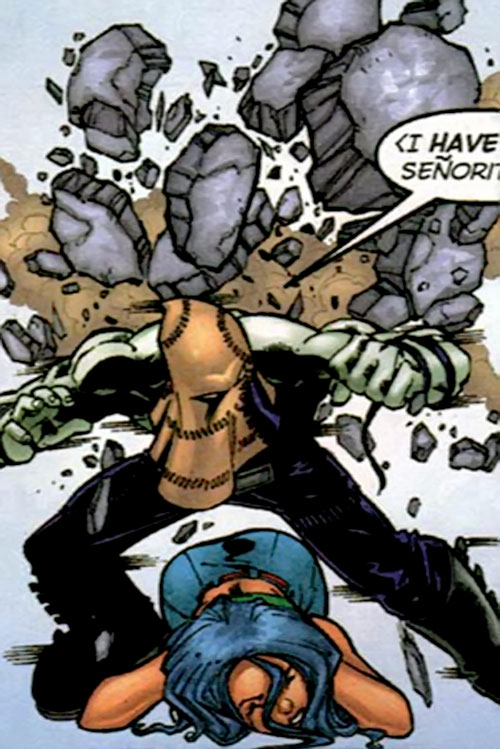