And in this corner ! Three of the most treacherous terrors ever to troop from Marvel’s titanic imagination ! FEATURING ! The mildly incomparable menace of… EL TIGRE !
– Uncanny X-Men Vol. 1 #25 intro blurb.

El Tigre first appeared in 1966, in the 25th issue of The Uncanny X-Men. Like the Locust in the previous issue, El Tigre was too mediocre to join the list of foundational X-Men baddies.

But there are a few titbits of lore about him, and he could be reworked to be more interesting. There isn’t much of a character in the first place, so that’s easy.

In UXM #25, Meroz and his compadres are stated to be from “San Rico”. In the Marvel Atlas, this flimsy fictional country was retconned  as being the same place as the similar “Santo Rico”.

The Atlas locates it on Chetumal Bay . In fact, it’s roughly where real-life Chetumal is. Thus, it eats up some land from northern Belize, and some land from the southern Quintana Roo state of Mexico.

The other character from this minuscule state (pop. 2.6M) is El Toro (Antonio Rojo), who briefly was President. I guess Santo Ricans like large ferocious animals.

The vintage depictions of San(to) Rico err somewhere between Northern Argentina, Southern Mexico and Cuba. So it’s a Latin American mishmash. Or rather, a baturrillo.

El Tigre is a veteran treasure hunter. He knows how to handle himself in dangerous jungles and other harsh environments.

He also has general criminal skills, and knows how to fight – with or without weapons. In the Savage Land, he used bolas and a dagger. Furthermore he’s fluent in English, Spanish and possibly other languages.

His henchmen are hardened criminals. One is an expert with the bola, another with the machete and blowgun. Both are experienced, accurate and good at ambushes.

Meroz was endowed with psychic powers on two separate occasions. This suggests two hypotheses. Howbeit both are No-Prize  material, as they’re not mentioned in the stories.

Cerebro could sense El Tigre, albeit in an imprecise way. So there’s something about the Kukulcán-empowered Sr. Meroz that resembles the power signature of a mutant.

With both halves of the pendant, El Tigre demonstrated the following :

However, he had limited reserves. He was fed power by the Solar Stone, an enormous snake-shaped stela topped by a two-metres tall golden gemstone.

In this state, Juan Meroz claimed that he was Kukulcán returned. It could have been a Thor-and-Donald-Blake situation, or outright possession. But it felt more like grandiose hyperbole and a claim to godhood on Meroz’s part.

Raiders of the hidden jungle

El Tigre then apparently lost all his powers. But he was taught new psychic abilities by the Man-God (Maa-Gor). These may have been psionic  in nature.

The one he demonstrated was mind-controlling felines. This worked even on the mighty sabretooth tiger Zabu, but Ka-Zar could bolster his cat’s resistance.

He also was now armed with a dagger and a bola.

During the 1960s, Juan “el Tigre” Meroz was a wealthy hunter of lost treasures. He specialised in gems – presumably he had specialised contacts to fence those. Operating out of Santo Rico, he pillaged lost Mayan ruins.

Meroz stated that he had worked on two continents. Given his self-aggrandising nature, this likely simply meant Latin America.

For years, Meroz attempted to find the semi-mythical temple of the god Kukulcán. In 1966 he finally found these ruins. He reached the site with his henchmen Ramon Dantas and Toloc.

Early excavations were promising, and Meroz found a strangely glowing pendant. It was half of a broken, featureless disc.

Kukulcán (more commonly rendered as Kukulkan) is an actual Maya divinity. And beyond – the name simply means “feathered serpent”.

This is apparently a common metaphor in local myths, with many supernaturals and people using this symbolism. *However*, in the MU, Kukulcán and the better-known Quetzalcoatl are two distinct entities.

Kukulcán features in Maya creation myths (creating mankind from maize flour was his idea), as well as a number of Marvel stories. The oldest is none other than the seminal Doc Savage novel The Man of Bronze, established to also have taken place in the Marvel Universe. There are also references to him in old Namora and Conan stories.

In the Marvel Universe, the Maya gods are known as the Ahau, or Ajaw, pantheon. Several have featured in MU stories – including Chaac, Ahpuch or Wayep. They are not the same gods as the Apu (Quechua pantheon) or the Tēteoh (Nahua pantheon), despite frequent confusion in older comics.

That’s how we roll in Tikal

Meroz kept in the pendant in his shirt pocket. The jewel warned El Tigre that his ruthless hirelings were about to murder him in his sleep. It then gave him magical powers to subdue them.

The jewel also made Meroz able to read sacred inscriptions in the temple. These explained that the pendant belonged to Kukulcán. He also learned that obtaining the second half would grant even greater power, albeit with great cost.

Fascinated by his new powers, El Tigre ignored this whole “cost” thing. He could sense that the other half of the pendant was in New York City. Days later, Meroz was there with his cowed henchmen.

Professor Xavier and the X-Men detected that a powerful threat was coming. But since El Tigre wasn’t really a mutant, they couldn’t locate him. In the nick of time they attempted to stop him from stealing the other half of the pendant from a museum.

However, ambushes from Mr. Meroz and his wingmen dispatched each X-Man (Beast, Iceman, Angel, Cyclops).

Alight is the man-god

With the full pendant, Meroz turned into a powerful golden-skinned figure clad in Maya-ish armour. He easily swatted aside his rebellious henchmen and the X-Men. El Tigre then generated a bubble of solar heat around himself. Riding this chariot, he returned to the temple of Kukulcán.

Within minutes, the man now claiming to be Kukulcán had cleared the jungle among the ruins. He then mentally enslaved the entire area. When a police unit came to investigate, they immediately fell under his sway. “Kukulcán” and his slaves then worked to consolidate the temple and its surroundings.

The X-Men came in before he would start to expand. “Kukulcán” was too strong for them, but they realised that he was drawing power from the snake-like giant stela. They covered the monument’s top in ice to cut off the energy, and engaged Meroz so he’d deplete his reserves.

This gambit narrowly worked. The decisive point was “Kukulcán” blasting the ground to force the X-Men down, which somehow triggered an earthquake. The stela was buried under the collapsing temple. The dazed El Tigre found himself depowered, and was arrested.

Ally to the man-god

In 1974, El Tigre was free again. He was in Mexico, working to “exploit the energy crisis”. His activities were threatening enough to draw the attention of S.H.I.E.L.D.. Colonel Fury sent Agent 19 (Bobbi Morse) for surveillance and investigation.

But in the Savage Land, the newly exalted Man-God (Maa-Gor) was looking for a ruthless mercenary. Global telepathic scanning revealed that Juan Meroz fit the bill. Maa-Gor psychically offered him an alliance to conquer the Savage Land, and El Tigre agreed.

Mr. Meroz rushed to Antarctica. But Morse had placed a tracer on him, and she followed.

Welcome to the jungle

After reaching the Savage Land, El Tigre was taught psychic powers by Man-God. 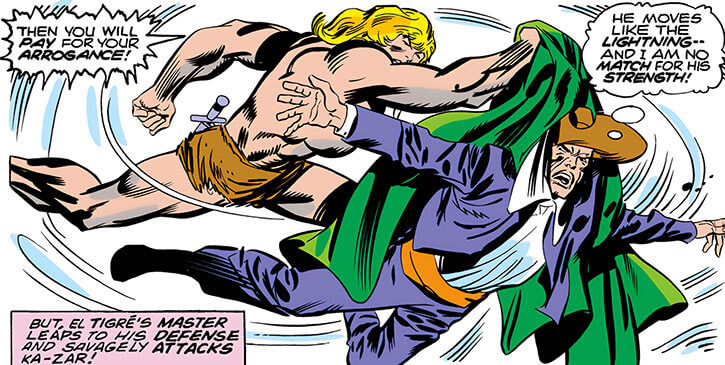 During the inevitable clash with Ka-Zar, they fared well. Meroz distracted Ka-Zar during the fight, allowing for victory. He then psychically cowed Zabu, Ka-zar’s sabretoothed brother.

Man-God did honour the deal, building an alien machine that could easily tap into the Savage Land’s vast oil reserves.

During further clashes with Ka-Zar and Agent 19, El Tigre held his own. Mostly he :

However, things went sour. El Tigre was mauled by Zabu. As he tried to flee the Savage Land, he was beaten by the villagers whom he had been terrorising. Then Man-God abandoned him, deciding that he no longer needed a servant.

As he left, Man-God mentioned that he had been empowered by the Savage Land’s mysterious Mystic Mists. The battered El Tigre seized that clue, making his way to the Mists to learn of their power.

However, the success rate of the Mists is actually dismal – the process is too random. Man-God was a freak occurrence, a perfect roll of the dice. When El Tigre entered the fog, he was instead mutated into a monster with heat powers.

As he confusedly melted a boulder, Meroz saw his newly deformed face in the vitrified rock. Panicking, he ran among the Mists, and fell off a cliff to his death. The Man-God later found the mutated corpse.

El Tigre was always dressed in what I assume is a gentleman’s outdoors outfit in Santo Rico. Well, except when he was a purported Mayan god.

Originally, Meroz is a ruthless and predatory man. But he’s also pragmatic. For instance, he pays his hirelings well since he’s aware most people in his business are underhanded bastiches. Still, he acts greedy and forceful.

After he gets the first half of the pendant, El Tigre acts like an egotistical megalomaniac. He would psychically mess with people’s mind for casual convenience, or just for amusement.

With the second half, El Tigre was running on full-on delusions of godhood. He would rebuild a Maya empire worshipping him, talked like a sun god, was convinced that his power was unmatched, and sought worldwide dominance.

In 1974, El Tigre was underhanded and all about exploiting oil. Kinda like J.R. Ewing, I guess. He also had a slight paranoid and predatory streak. Or rather, it was more noticeable than before.

“Silence ! It is not for hirelings to question El Tigre ! You are merely to obey !”

The material is sparse, so those stats are tentative. The story *heavily* insists that his power is colossal, but as usual we’ll stick to what was demonstrated.

Drawbacks:
Power Loss (being unable to drawn energy from the solar stone, which seems to require line of sight), Power Loss (being deprived of his talisman), Creepy Appearance (golden skin and pseudo-Maya armour).

Note:
This is just written here as a Power Loss, but his solar energy reserve evoked early Sunspot (Roberto da Costa)’s. So similar mechanics may be involved.

He could use his powers for a time without being fed by the Solar Stone stela, but the more APs he employed for Dice Actions the faster he depleted his reserves. Dwindling reserves seemed to mean a rising R# – and lower AV and Range even at constant APs.

I also suspect that in this form, El Tigre had APs of Solar Sustenance, Shade and Flame Immunity.

The Encyclopedia Mythologica  lists a “Class 25” strength for the average god of the Ahau pantheon/tribe/species. So if there’s indeed an avatar thing going, he might have STR 10.

That amounted to Control (Felines only): 04. Hey, making cats cooperate is no mean feat !

He also had the following weapons : 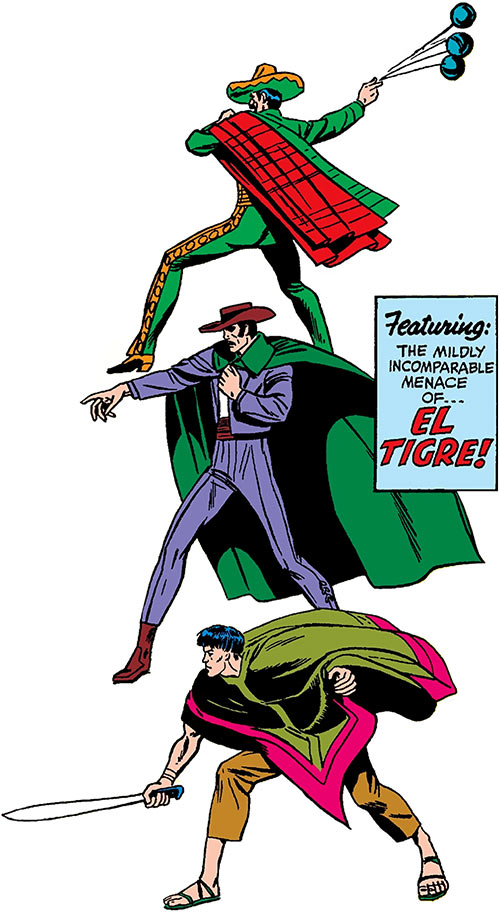 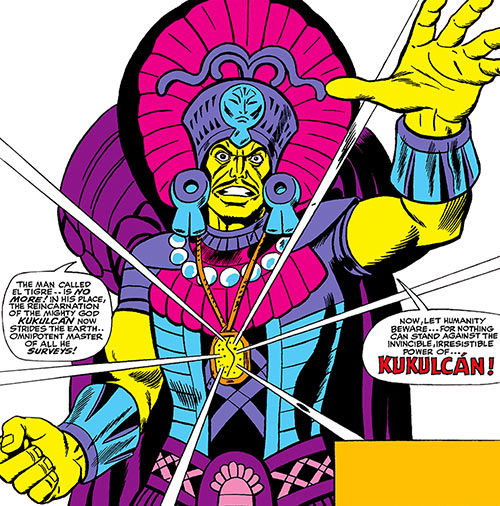 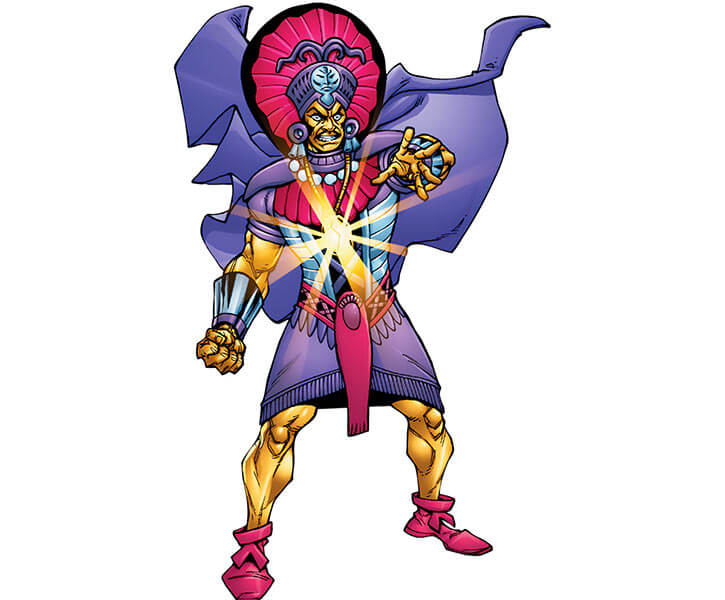 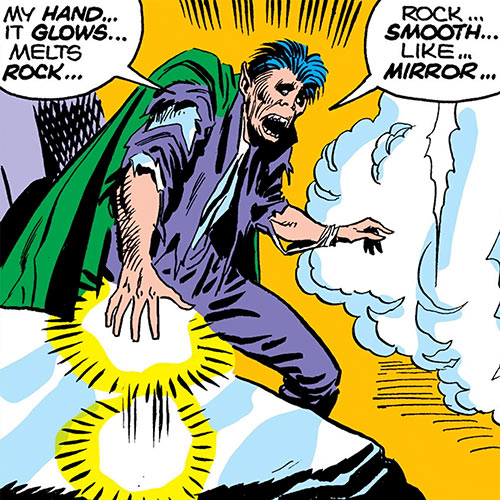