Recettear: an item shop’s tale is a dōjinFan-made, amateur work Japanese CRPG for Windows released in 2007.

It was translated in 2010 by an indie localization shop  . This profile is based on the English translation of the game.

It’s a small but cute and funny thing.

Most of the adventurers in the game are deliberately archetypal animé heroic fantasy characters. Which I think is handy to have, and makes for short profiles.

Elan is an extremely fit young man, with formidable strength and endurance.

He is also an expert in hand-to-hand combat, and has no problem engaging monsters bare-handed. In practice though he wears reinforced gloves.

He can rush his opponents and do some sort of shoulder rush or leg sweep to knock them back. This also leaves Elan on the floor, but he’ll get up quicker – as he’s not the one who took the brunt of the impact.

Like the other adventurers affiliated with Recette, Elan has special moves. 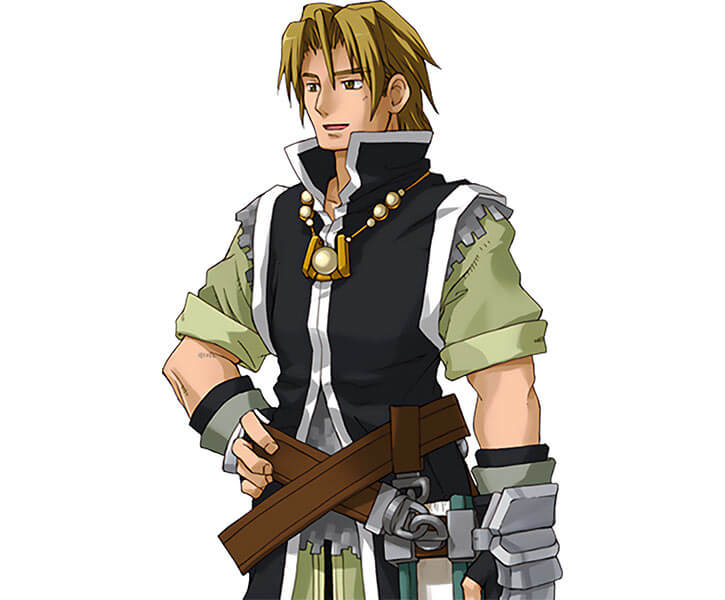 Elan grew up at the orphanage in Pensée.

To this day he remains very attached to this place. Most of his earnings is spent buying supplies and toys for the orphans, whom he regularly visits.

As a young adult he joined the main local religious organization. However, next to nothing is known about this faith.

Though he was a strong trainee, Elan lacked direction.

The stipend for Priests-in-Training being low, Elan kept almost everything for the orphans. Thus, while he spent a lot of time at a nearly pub for adventurers, he developed a keen technique of running away not to pay the bills.

One afternoon, Elan stood in hiding near the orphanage. He felt too ashamed to visit, as he could not afford bearing gifts. But the young Recette convinced him that the orphans would be happy to see him anyway.

This conversation with Recette inspired Elan to seek a new source of income. He soon obtained his professional card from the Adventurers’ Guild.

To thank her for providing him with inspiration, Elan made Recette one of his first authorized patrons. 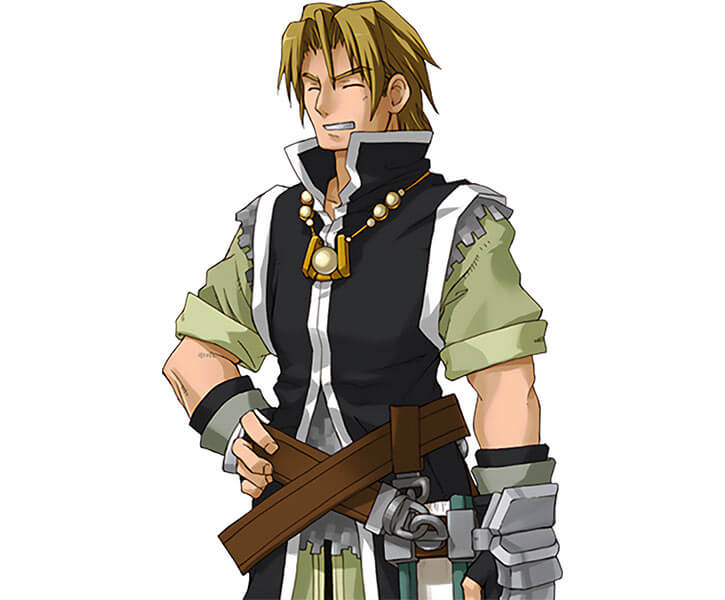 Elan is a big, strong lad with a goofy smile, who wears his heart on his sleeve.

Though he has something of a rascally nature and needs to be provided with direction, he generally means well and likes to help people.

He seems to be something of a health nut, and encourages people around him to exercise. This terrifies the lazy, bonbon-devouring Recette.

Occultist (Rituals) only with Rituals with which he has a Familiarity.

Familiarity (the Rituals below), Misc.: Elan is registered with the Adventurers’ Guild, Misc.: Elan is a priest-in-training, which may or may not have perks or carry status.

MIA toward Alcohol, MIA toward Upholding the Good, Debt 1 (gifts to the orphans).

Flame charge
Effect: Jumping (Horizontal only): 02, Flame being (Area of effect 1 APs): 02, Stagger (No Range, Area of Effect 1 AP): 03
Modifiers: All effects are Combined and must be Combined. Which means that everything within 1 AP of the path of his jump is affected by Flame being and Stagger. The Ritual only lasts for that jump.
Casting time: None – but must be leaping forward.
Components: None.
Note: The Ritual has a difficulty of 03/03 (highest Power APs).

Go berserk
Effect: Power Reserve: 04
Modifiers: Power Reserve only lasts for 2 Phases, and can only increase STR by 02 and BODY by 02. While Power Reserve is active, Elan can only move and/or attack.
Casting time: None.
Components: None.
Note: Elan will usually spend HPs to improve his chances of landing the Ritual.

Fist flurry
Effect: Superspeed: 06, Sharpness (Superspeed): 01, Dispersal: 03
Modifiers: Superspeed only for EV substitution, Dispersal is Partial. The Ritual’s effect only last for a single Phase.
Casting time: None.
Components: None.
Note: The Ritual has a difficulty of 06/06 (highest Power APs). Elan will spend HPs to improve his chances of landing the Ritual.

In the case of Elan, it becomes Hero Points-centric. Since two of his abilities are powerful, but his Spell Points total is poor.

These Rituals (and some other Rituals for Recettear characters) *are* cheesy. With the clustered Powers and the use of Powers that linearly add APs.

It works with the kind of humour in Recettear and corresponds to how the characters work in-game. But if you’re cribbing ideas for Player Characters, you’ll want to be less sloppy and more balanced.

The Fist Flurry ability’s defensive side is clearly intended to mimic the “invincibility frames” mechanics in beat ’em up video games like Street Fighter. I have decided to be particularly literal and use Dispersal. Since the joke is that the move duplicates a famous attack by Gouki.

As usual the gear is for the character early on, before starting to use special magic equipment.

You can also see our FAQ about video game characters for even lengthier and more arcane considerations.