The third Electrocutioner is an OK athlete, hand-to-hand combatant and operator. But any super-hero worth their salt could handily defeat him if he were to count on those skills alone.

His main weapon is a rig and a pair of gauntlets that can project bolts of electricity. The main applications are touching a target to shock it, projecting lightning bolts, or having a lightning bolt explode and fork out over an area (Bomb in DCH, Burst Area in DCA). The later manoeuvre is usually used to take out a small number of minor opponents, such as policemen.

The Electrocutioner has also sometimes used the heat from his gauntlets to crudely weld metals together or destroy an engine block he had his hands on. If he completely Blindsides a victim and is close enough to touch the person, the GM may choose to let him use his Lightning as both the AV and OV – that was the case when he killed the Batman.

Of course, any hero who is prepared with insulated equipment will make short work of him, and targets who are not grounded will be a problem.

Lester Buchinsky is the brother of the original, late, much more dangerous Electrocutioner. The original clashed repeatedly in New York with the second Vigilante, and eventually met his end at his hand. When his brother died, a new Electrocutioner arose.

(Well, two – another man used the “Electrocutioner” name, though he doesn’t seem related to the other two.)

Like his brother he would stalk, judge and punish (usually by execution) criminals he deemed to have had an easy out due to the “bleeding heart courts”.

The new Electrocutioner appeared in Gotham to stop Galvan. Galvan was a dangerous criminal who had miraculously survived the electric chair and was systematically killing those who had witnessed his bungled execution. While in pursuit of Galvan, however, the Electrocutioner spent more time fighting with cops and Batman and Robin due to their interference than getting his prey.

During those violent events, Electrocutioner III became the man who killed Batman. He ambushed him and electrocuted him by surprise, stopping his heart. Robin III caught up with him and forced him to defibrillate Batman’s heart, however, after two and a half minutes.

Electrocutioner III was later knocked out during a large fight at the Gotham Central police station, as Galvan was attempting to kill Police Commissioner James Gordon.

In prison, Buchinsky decided he had been stupid all this time. His heart was not in being a vigilante after all. The more his brother’s death was receding in the past, the more he wanted to use his Electrocutioner gear for simple profit.

He allied himself with two minor criminals, Cluemaster and Czonk, and escaped Blackgate with them. Their Cluemaster-designed plan was nearly successful, but they were stopped by Robin (Tim Drake), Spoiler and sheriff “Shotgun” Smith.

Electrocutioner III then became part of Blockbuster (Roland Desmond)’s informal team of mercenaries. He helped with Blockbuster’s takeover of Blüdhaven and several capers, such as Blockbuster’s very nearly successful hunt for Oracle. In this capacity he, like all the others, has been soundly defeated by Nightwing several times.

Electrocutioner is a ruthless, petty brute who thinks he’s Mack Bolan . He views himself as a killer super-mercenary and wants money, rep and women – and right now. He has a mean temper and is not very bright or particularly full of initiative, but nevertheless tends to treat everybody opposing him as an imbecile, and most of his colleagues as cowards.

His only redeeming quality seems to be that he has some physical courage. He is likely to ignore his wounds and fight or conduct his mission until he’s knocked out cold.

Electrocutioner sometimes makes mediocre puns having to do with electricity.

* Against electrical attacks.
** Against non-Energy attacks.

For the definition of Physical Impact and other categories of Descriptors used for defensive Powers, see our New Rules section for DC Adventures. 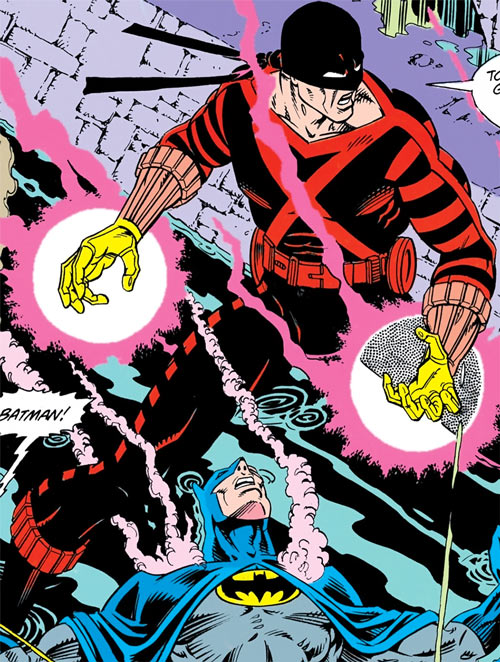 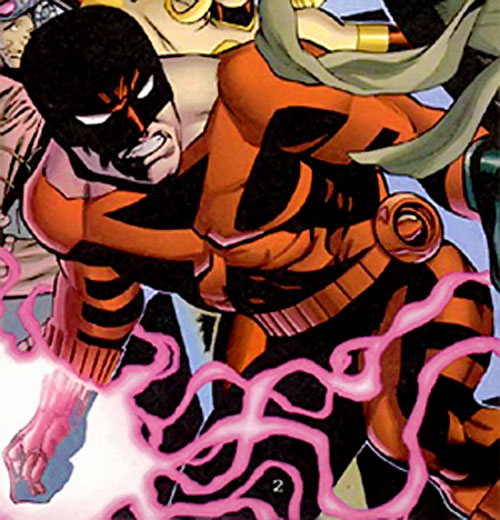