This profile is presented in three parts. For the sake of slower readers and/or those reading this site on a tiny handheld screen.

Fox’s martial skills have stalled. She remains an excellent broadsword-and-shortsword fighter, but it doesn’t quite suffice anymore.

After conferring with her teachers, she started studying staff techniques. Staff-fighting should both compensate for her weaknesses (such as reach) and enhance her strengths (such as mobility).

But it’ll take *at least* two years of training before it’s deployable in the field. 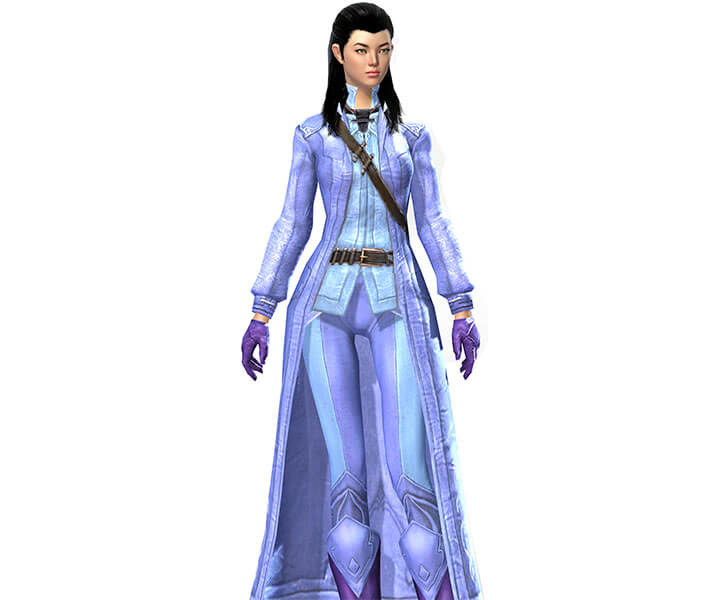 In the meanwhile, she has taken after the Order of Whispers, who use a lot of firearms. She now fights with paired pistols.

As it turns out, she’s a dab hand with those. Very Chow Yun Fat.

The barrels are enchanted to never need bullets or (smokeless) gunpowder. They can be fired forever. This isn’t a difficult enchantment, but a fully reliable one costs an arm.

While they look more like flintlocks, they are single action pistols. However, each has a small Asura gizmo mounted on the side of the handle. It’s a sort of thumb pedal that uses springs to cock back the hammer with a press.

This gadget is rarer and more expensive than the barrel enchantment. But it allows for rapid fire, given enough training and manual dexterity. Especially with unlimited ammo.

(I’m *assuming* that the firearms do not *quite* perform in-universe as they do in the game. They presumably are a bit slower, need to be reloaded, etc. in most cases. But the skills Fox is using at this point rely on sustained rapid fire). 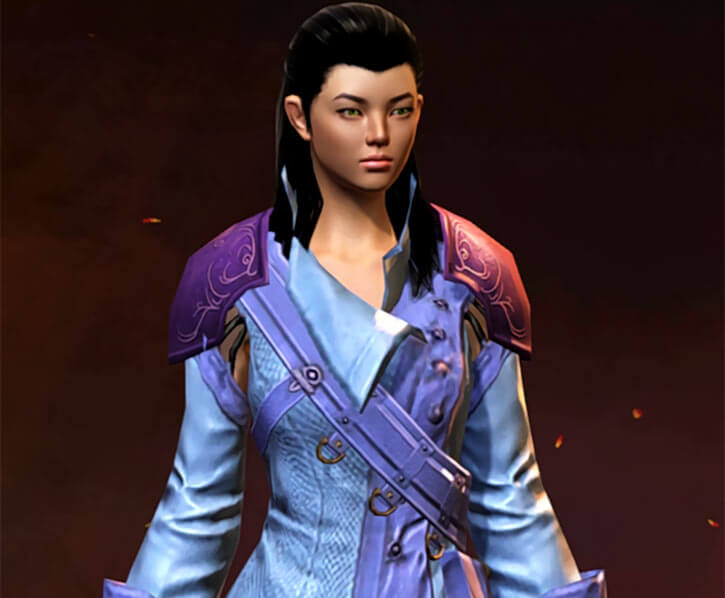 Variant outfit worn for a time during this span. I wasn’t a fan either, but it had better stats. Video games.

Fox’s core fighting style is thus to remain acrobatically mobile, while pouring rapid fire from both pistols into her target.

There are also additional enchantments on the receivers :

The pistols also have reinforced striking surfaces, to club with.

Elegant Fox Spirit has one of those faces – the kind people trust. Most everyone just assumes that she’s honest and reliable.

At first the effect was noticeable, but nothing to write home about.

However, as her reputation grew it magnified it. Since said reputation is to be an entirely reliable, extremely professional heroine.

Her rep was spreading nicely before, but after Claw Island she became a major champion. This fame is strongest among soldiers, but nowadays few families don’t have members serving in the military or a militia.

An idea association with the word “fox” reminded me of the Cocteau Twins’ most famous album.

The mood fits curiously well and heh, it’s a classic.

https://www.youtube.com/watch?v=H5njyY6y0zU
Available for download on Amazon . It’d be awful if it weren’t.

Investigation eventually revealed who the mad soldier was. He was Corporal Kellach, formerly of the Seraph.

Kellach had been seeking ways to better serve. He thus consulted with the infamous Alastia Crow  , a pirate seer. This led to him securing a magical scimitar from risen Orr.

A few bits of background here

Orr is one of the fallen Human kingdoms. Faced with Charr invasion, they desperately resorted to a forbidden spell written on a divine scroll. It destroyed the invaders, but also sunk Orr beneath the sea.

Later on, the Elder Dragon Zhaitan raised Orr back to the surface. The resulting tsunamis were an immense catastrophe. The death-aspected Zhaitan also drew hordes of undead from the ruins – the Risen.

(The Charr are a race of, more or less, tiger people. They have slain their gods and believe in war, conquest and technological industry. The Charr’s great conquests have destroyed most Human realms, the chief exception being Divinity’s Reach). 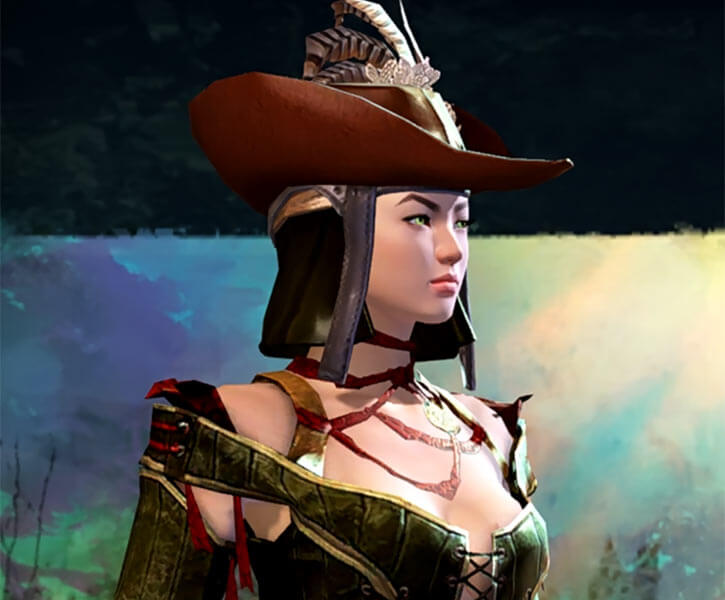 Fox disguised as a pirate. No, we’re not going to talk about the bustier. Video games.

Artefacts from Orr are, unsurprisingly, deeply corrupt. Kellach thus became insane. He also was followed by a horde of Risen – which he couldn’t notice.

Desperate, he attacked Alastia Crow to force her to tell him how to break the curse. There wasn’t one, but Crow spitefully lied. She told him he had to bathe in the blood of Queen Jennah  . Kellach convinced himself that it would be for the good of the realm.

The apparent Risen invasion was thus actually the horde following the oblivious madman, as he made his way toward Divinity’s Reach and the throne.

Fox worked with Agent Ihan and with Logan Thackeray to protect the Queen. They went for a plan using an illusory doppelgängerEerily exact double of a person. Often supernatural and evil. of Jennah, drawing the madman into a trap.

Kellach was slain, and his horde caught in the blast of a half-dozen technomagical warheads.

These events shook Logan Thackeray. He saw in Kellach’s sincere desire to serve the Queen a reflection of his own disastrous decision during the attempt to slay the Elder Dragon Kralkatorrik.

Having become good friends, Logan and Fox discussed this at length. The conclusion that they needed to focus more on global survival than on their ardent Divinity’s Reach patriotism was hard to escape.

Not long afterward, former Destiny’s Edge member Caithe tried to reunite the team to fight the Elder Dragons. Logan took Fox along with him to meet Caithe, though he wasn’t aware his other comrades would also attend.

The attempt miserably failed. Logan and Rytlock Brimstone were still at each other’s throats regarding the Charr wars against Humans. And Zojja was still bitter and hateful toward Eir Stegalkin, whom she unfairly blamed for her mentor Snaff’s death.

However, Caithe noticed Logan and Fox discussing afterwards. She realised that Fox could be a way to convince Logan over time. Caithe therefore encouraged Fox to take on a more forward role. 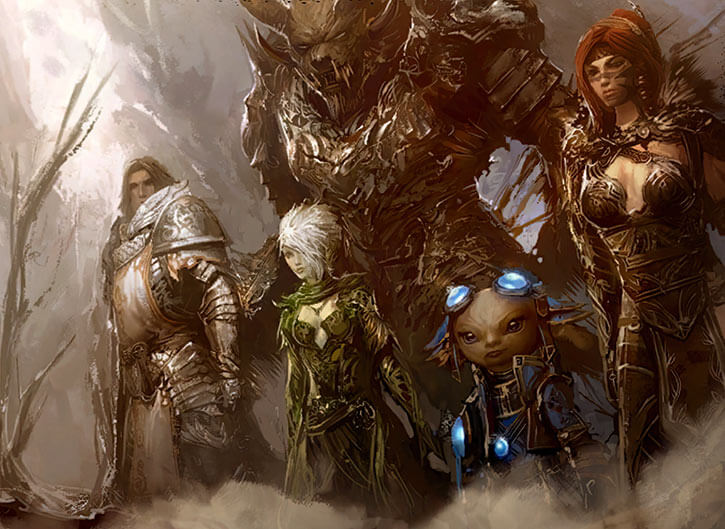 Between this and her crush on Agent Ihan, Elegant Fox Spirit agreed to join the Order of Whispers.

The Order is an international, interracial intelligence agency. Its focus is on defeating the Elder Dragons.

It was founded centuries ago during the fall of Elona, one of the mightiest Human kingdoms. Elona’s core area was a sort-of-Nubian  place.

The Order uses subterfuge, intelligence, stealth and manipulation to reach their ends. They have a lot of experience with this, vast networks of informants, and troves of secret knowledge.

They also have distinctive expertise with small-scale special operations and assassination.

What we do in the shadows

Though Fox’s primary loyalty was with Queen Jennah, the Order was fine with this. Jennah supported an international alliance with the three Orders :

She saw this as the world’s only chance against the Elder Dragons.

However, Divinity’s Reach traditionalists, including some of her more powerful ministers, strenuously disagreed. They also bitterly opposed Jennah’s nascent diplomatic channels with the Charr.

The Order of Whispers thus had little hesitation ensuring that Queen Jennah would continue to rule. And joining the Order would give Fox even more latitude to defend the Queen than she could as a Shining Blade associate.

Main leaders of the Order of Whispers.

With this deal in place, Elegant Fox Spirit was detailed by the Order to help exfiltrate one Demmi Beetlestone  .

She was the daughter of the powerful Legate Minister Lord Beetlestone.

Though her father was Jennah’s main political opponent, Demmi wished to denounce his plots.

For this op, the Order deliberately placed Fox under the command of a Charr agent, Tybalt Leftpaw.

Though the Human hated this, it forced her to start considering the Charr as people rather than as The Enemy™. Over time, Fox and the genial Tybalt became friends.

In the end, Demmi helped kill her father’s right-hand man and joined the Order. Tybalt was allowed to continue field work — unbeknownst to Fox, he had previously been a desk jockey.

Elegant Fox Spirit was also confirmed as a full agent.

One of the ongoing projects of the Order was to secure allies among the minor races. Fox and Tybalt were assigned to work with a friendly village of Skritts, to determine what they knew.

The Skritts had found eggs of Destroyers  , a type of creature serving the Elder Dragons. They didn’t know what they were, but were desperate to sell stuff to buy food. So they stockpiled the valuable-looking eggs.

The two agents helped defend the village. The surviving Skritts put their brains together, and came up with a plan. They and the agents raided nearby centaur camps, stealing large amounts of explosive powder. The Skritts used it to build a huge bomb.

In defence of rats

The Destroyers attacked again. But the agents and Skritt skirmishers bought enough time. The Destroyer queen and her retinue were lured to the enormous powder charge – then blown up.

Furthermore, the Skritt village now recognised Destroyers as the cause of their exile toward the surface millennia before. They thus agreed to become associates of the Order of Whispers, and formed a special long-range patrol unit.

Elegant Fox Spirit was promoted to the Lightbringer rank. That’s the equivalent of a Special Agent. 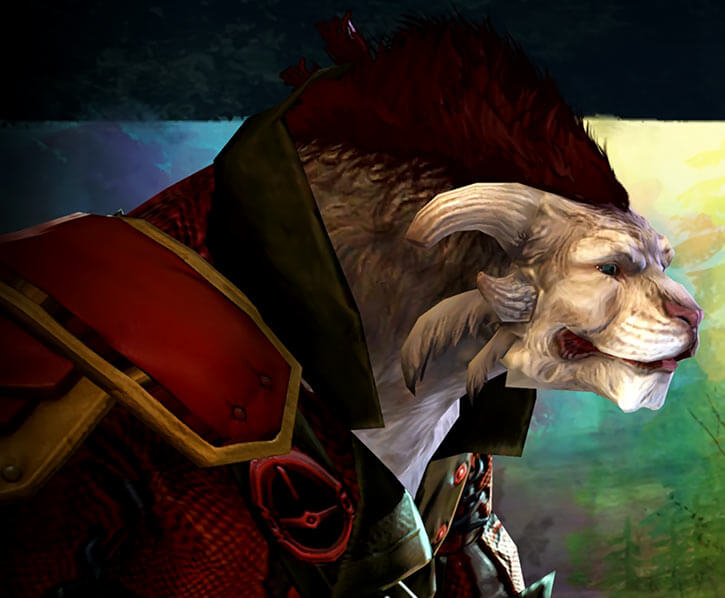 A key Order asset, Yeng Isen, then went missing. The unlikely pair of Fox and Tybalt were sent in.

They discovered that Isen had been killed by a rare, stealthy sort of monster from Orr. This likely meant that the Elder Dragon Zhaitan’s attention was turned toward Isen’s hometown – Lion’s Arch.

(Lion’s Arch is a bustling port city. It used to be a pirate haven, but grew into a cultural, commercial and political hub. It is the largest independent city. And as a neutral ground is an ideal place to ally against common threats.)

Indeed, Zhaitan’s huge Risen army soon attacked. The two agents assisted at the battle of Claw Island, a fort locking the maritime access to Lion’s Arch. But the fort fell.

Lightbringer Tybalt Leftpaw chose an heroic death. He held the Risen at a chokepoint, so wounded soldiers could be evacuated.

Fox and other Order of Whispers operatives patrolled the city, killing Risen scouting parties to delay the assault. This bought time to call in outside help.

Onward to the final third of this profile, agents !

Undead dragon smashing the fortifications at Claw Island. It had been underwater for a good while.