So not, no relation to Marvel Comics’ Elektra. “Elektra” is just a first name, as is, say, “Thor”.

Contrary to popular belief, Elektra of Themyscira was the first Amazon ambassador to “Man’s World.”

She was sent to the court of Pharo Teth-Adam (better known as Black Adam) during the third millennium B.C.. Teth-Adam claimed her as his queen and took great joy in corrupting her. His wedding gift to her was the Whip of Submission, an occult object made from the hair and bones of harpies.

After Teth-Adam was humbled by Shazam for abusing his powers, Elektra wandered the world. She studied the occult and spread mayhem wherever she went. Her knowledge of the occult is such that she has been able to grant herself eternal youth and beauty, which, alas, is only skin-deep.

Because of her dabbling in the black arts and her cruelty, Elektra is shunned by the Amazons, especially Princess Diana.

Elektra is a stunningly beautiful woman who stands a full 6’6”.

She dresses in what appears to be a leather teddy and black hip boots with stiletto heels.

She is extremely pale, with a mane of long, black hair and eyes the color of night. Her lips are full and blood-red, as are her rather lengthy fingernails.

Elektra was designed to be a major villainess, the head of an international terrorist cartel who delighted in going solo against super-powered foes, especially Black Adam and Wonder Woman. Elektra loathes Black Adam, being her own woman now, and has been an occasional ally of Captain Marvel and the Marvel Family against him (the enemy of my enemy is my friend).

While she would never admit it to anyone (especially herself), Elektra is genuinely attracted to Captain Marvel for his purity and decency, and consequently would REALLY like to seduce him. God forbid, if you’re more partial to Superman in your campaign, Elektra could be run very similarly (à la Maxima). 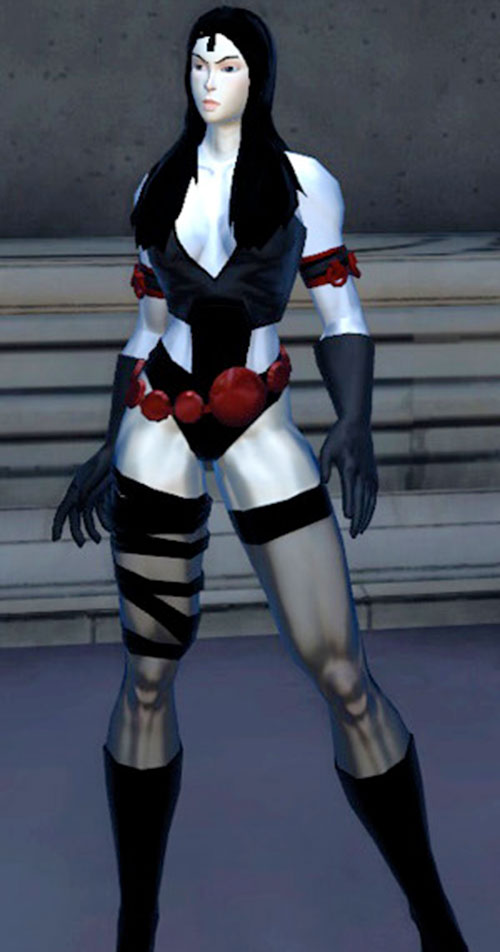