Like all Tromians, Jan has the ability to transmute one element to another.

After an attack by Mordru, Jan learned that he could transmute himself as well. This makes it easier for him to transmute another substance if he is already the substance he wishes to create.

Jan Arrah is the son of Tarn Arrah and Garra Arrah. These were spiritual leaders of the planet Trom and good friends of R.J. Brande, inventor of the Stargate (no relation). Tarn was the only Trommite who could create Tarnium, the element needed for the activation of the gates, a skill he eventually taught Jan.

When White Triangle-affiliated Daxamites began destroying Stargates all over the United Planets, R.J. came to Tarn for more Tarnium. Coincidentally, that was the day that Trom was to discuss joining the U.P.. Tarn, unable and unwilling to delay the historic conference, refused to go with R.J.. But, after much urging, he allowed Jan to leave Trom to create more Tarnium for new Stargates.

This was fortunate for Jan, who thus escaped the Daxamites’ destruction of the entire population of Trom.

This was also lucky for Earth. Jan proved to be the key to stopping the rampaging White Triangle Daxamites, by creating the Tarnium for a Stargate to send them to another planet.

Jan turned down an invitation to join the Legion in order to properly deal with the death of his race. He saw death as a change to a higher state, which he had not yet earned the privilege of achieving.

He went back to Trom to create monuments for the deceased. But Jan was interrupted by President Chu of the United Planets, who put him under mind-control and into a suit which focused his powers. Chu’s goal was for Arrah to kill the Legion, which she saw as dangerous to her plans.

Chu planted in his mind false memories of seeing a Sun-Eater and of Ambassador Winema Wazzo assaulting on him. Thus when the Legion read his mind, they’d suspect her…and, for the sake of fighting the Sun-Eater, would assemble the Fatal Five, who would eventually kill them.

After testing him with dummies of Legionnaires, she sent Jan to attack the Time Institute. She felt that it was equally dangerous to her plans.

After he proved to be suitably destructive, Chu sent Arrah to attack the planet Guron, where she would dispatched the Legion to stop him. He defeated all of the Legionnaires except for Shrinking Violet, who managed to stop him.

The Legion solved the mystery of who was after them. After tending to Jan’s wounds, they confronted Ambassador Wazzo with the evidence in front of the entire U.P. council. Cosmic Boy, suspecting Chu’s hand in the events, had Jan join Live Wire’s Legion rescue Squad, which saved the Legion from the Fatal Five.

Following the success of this endeavor and the relaxation of membership restrictions on the Legion, Jan accepted full membership in the Legion. He took the code-name Element Lad. He often takes leaves of absence to return to Trom and transmute the remains of the dead Trommites into crystal monuments.

He was recently turned into almost immobile living crystal by the sorcerer Mordru. Through this, he learned to change his own body’s substance. Now, changing other objects is more difficult for him, but he can do it more easily if he changes himself to that substance first.

The changes to his power and the constant changing of his body’s substance has made Jan’s mind somewhat unstable.

Jan has slightly curled blond hair. He wears a mostly black LSH uniform with horizontal white bars going from the neck to the chest.

Jan is bright and upbeat. A devout pacifist, he dislikes fighting and tries to find a peaceful way to solve things. Jan is deeply spiritual, and since the Trommian religion is based around the idea that death is the transmutation to the next life, he can come off as heartless when talking about death.

Drawbacks:
MIH (War and Fighting), Miscellaneous (Jan’s religion is based around the fact that death is merely the transmutation to the next state, and it makes him sound a little callous when discussing death with others).

Until just after the battle with Mordru, Jan’s Molecular Chameleon was Always On. Also, immediately after Mordru transmuted Jan, he was extremely slow moving and stiff (Dex 03). He eventually regained his normal Dex. Before the Mordru battle, Jan did not have Molecular Chameleon. 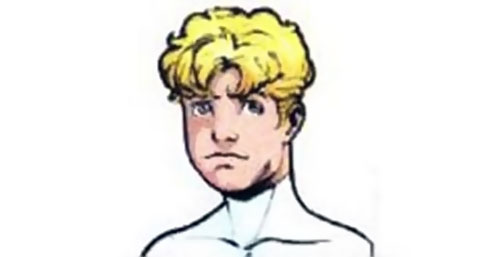