The Elementals — Magnum, Zephyr, Hydron and Hellfire — are super-powered immortals from another, apparently Earth-like world. Zephyr said that they were “a pantheon” and spoke of the Elementals as gods.

At first glance exaggeration seemed likely. But encounters between Zephyr and Thor (Thor Odinson) and statements from the Collector (Taneleer Tivan) make it likely that the Elementals are “gods” in the same broad sense that the Asgardians or the Olympians are.

One little caption establishes that the Elementals were originally mortals. They then ascended to godhood as they jointly acquired the necessary power. Nothing else is known. Howbeit one gets the impression that the male Elementals were already powerful men (nobles ?), whereas Zephyr is clearly stated to have been but a proletarian serving wench.

In unrevealed circumstances, the Elementals were cast out and ended up on Earth-616 . Two dates were given for their arrival on Earth : 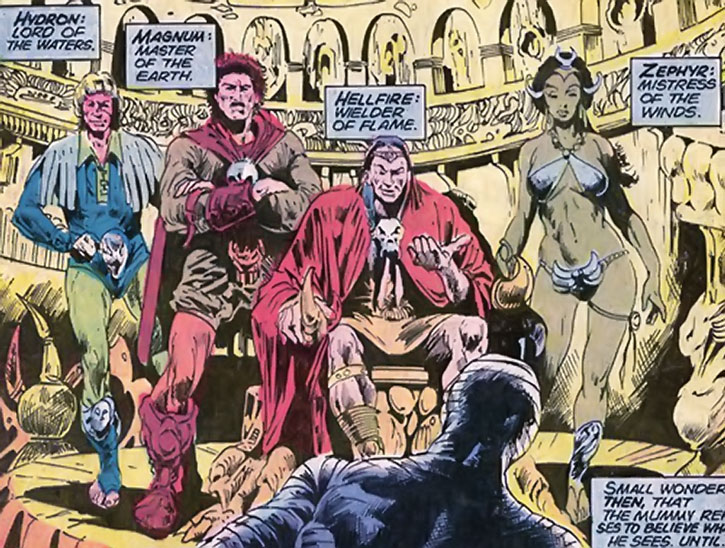 It is possible that both accounts are true. For instance the Sorcerer Supreme Agamotto might have defeated them when they arrived circa 18,800 BC, and sent them to a limbo dimension for more than 15K years before they could return. The Elementals would probably have omitted to mention that “detail”.

Stages of grieving : the Nile

Once they could establish themselves on Earth, the foursome carved themselves a kingdom. They eventually went to war against the regional great power – Ancient Egypt.

Two Egyptian heroes, the wizard Garret and the warrior Dann, allied and created a ruby scarab. It was not unlike the artefact discovered by the Blue Beetle (Dan Garrett) in the DC Universe.

Dann used this talisman to disrupt the power of the Elementals, then vanquish them.

The Elementals were sent to an empty dimension called the Castle Out Of Time. Though they eventually learned to perform transdimensional  magic from this limbo , time was passing at a much greater speed on Earth.

Zephyr learned to fly across the dimensions and return to Earth. But the other three had to work for centuries to develop a ritual  so they could cross over.

During one of her sorties circa 1,000 CE, Zephyr stole a red magical gem from Thor while he was carousing in Midgard. However, it wasn’t the ruby scarab as she had hoped, but a seduction gem. 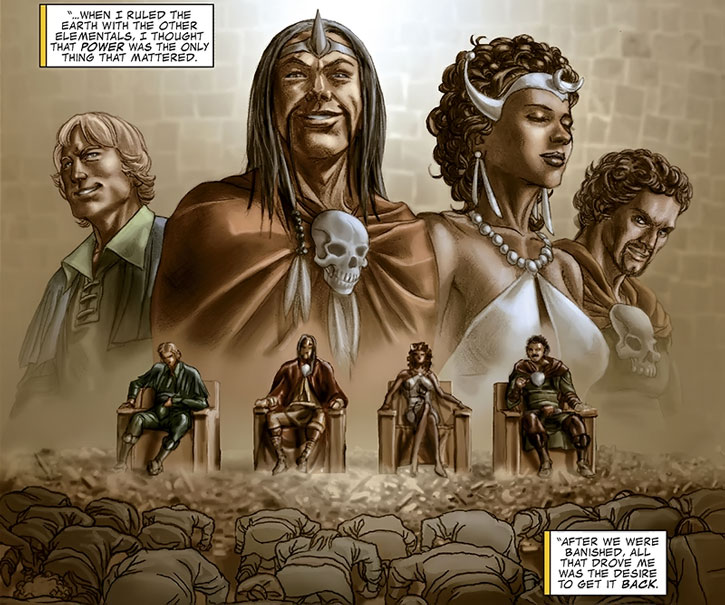 In 1974, the Elementals summoned our friend N’Kantu the Living Mummy to their realm. They claimed that they would restore his humanity if he brought them the ruby scarab.

The Mummy was thoroughly unconvinced by the ego-ridden foursome. Thus, Zephyr magically enthralled him instead – presumably with her seduction ruby.

N’Kantu was sent to invade the headquarters of Professor Abdol, who held the Scarab. Abdol — perhaps better known as the Living Pharaoh or the Living Monolith — had considerable security on site. But even these couldn’t stop the Mummy. While the Mummy and Abdol were fighting, a thief darted in and left with the Scarab.

The thief, Rich “the Asp” Harper, drove back to Cairo. But the Living Mummy was now after him. Harper repulsed the Mummy with incendiary weaponry. But Zephyr of the Elementals came in, healed N’Kantu and forced Harper to talk. The thief told them he had already sold the artefact to a certain Doctor Skarab. 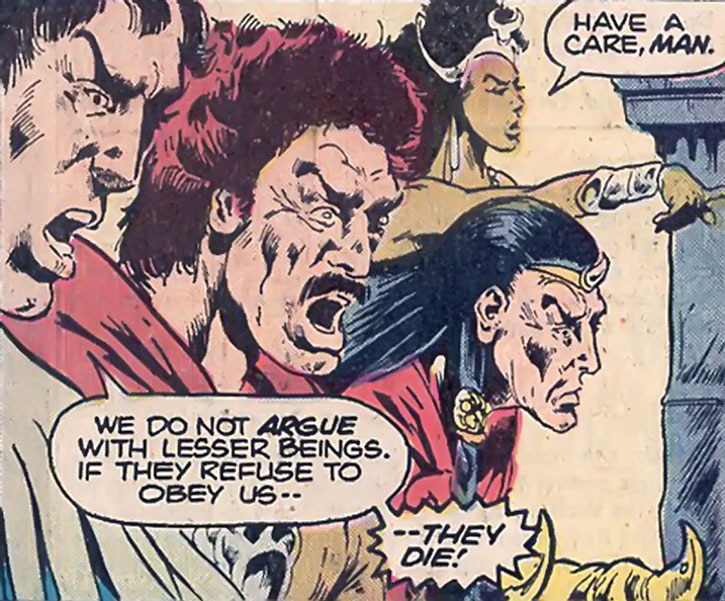 Once in Skarab’s presence the Mummy allied with him instead, and Zephyr chose not to stop him.

Furious that it was taking too long, the other three Elementals came in. They chained Zephyr for her failure and attacked Cairo to obtain the Scarab.

However, the three male Elementals relied on but brute power and impatience. Thus, they did not find the Scarab either. They trapped the entire metropolis under a magical force dome so the artefact couldn’t be taken away. This display of power sparked an insurrection as some Cairenes believed that the Elementals would be better rulers than Anwar Sadat .

The male Elementals just lashed out in frustration. The complete chaos in the immense city killed hundreds. During the fighting, the Elementals discovered that the ruby scarab was now apparently inert. It couldn’t be used against them.

As a result, they refocused their efforts on taking over the entire country. In the meanwhile, they had their new followers hunt down N’Kantu and his allies. The situation continued to degenerate as Magnum invaded Sudan, Hellfire repulsed Israeli troops at the border, and Hydron fanned the Cairo insurrection into a civil war.

N’Kantu and his allies wounded Hydron. They also freed Zephyr, who decided to join them. This spurred the male Elementals into refocusing their efforts on the Living Mummy. But by this point Dr. Skarab had learned how to use the Scarab. It wasn’t inert after all.

He shunted Cairo into an otherdimensional  aleph, where he nullified the powers of the Elementals. Magnum, Hydron and Hellfire were beaten by superior teamwork then flung out of the aleph to fall between dimensions. As Cairo returned to Earth, Zephyr fled with Rich Harper and the ruby scarab.

In 1977 the explorer Hecate found the three male Elementals. She nursed them back to health. They lied to her, and she agreed to help them “protect the Earth” against the “destructive Scarab artefact”. They soon found and captured Harper, Zephyr and the jewel. 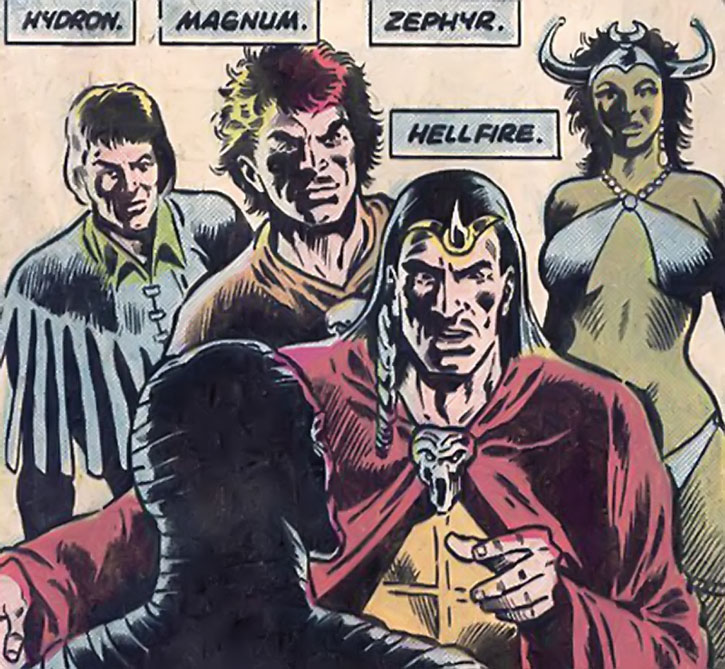 However, Ms. Marvel (Carol Danvers) sensed the danger and responded. During the fracas she told Hecate that she had been duped. But the male Elementals seized the Scarab, which greatly enhanced their power. Though the situation looked dire, the Elementals immediately turned against each other for possession of the Scarab, allowing Ms. Marvel and Hecate to take them down.

What happened next is unrevealed. The three male Elementals ended up imprisoned by the Collector (Taneleer Tivan of the Elders of the Universe). Perhaps the mysterious Hecate had a link with Tivan.

As to Zephyr, she decided to become an heroine.

She apparently fought a creature that may have been Fin Fang Foom. But her new career was cut short as the Collector abducted her.

However, the crafty Zephyr still had the seduction ruby. She used it to have the Collector become her lover rather than her jailer. She then arranged for Thor to help her get out of Tivan’s collection. However, the Collector still presumably held the other three in one of his starship museums.

As to Zephyr, she left with Ego the Living Planet to help it heal grievous wounds.

The Elementals are permeated by elemental energies. This is apparently in the same sense that Thor is a storm god or Poseidon a water god – “divine magic”. However, while their raw might is enormous they are arrogant, impatient and imprecise.

Thus, while they can bulldoze entire armies, against skilled superhumans there’s a good chance that they’re going to have their backside handed to them.

In DC Heroes terms, their AVs are generally mediocre and they prefer to spend their Hero Points  on grandiose demonstrations of power rather than to fight properly. Against a hard target like Ms. Marvel, they eventually tried Flailing Attacks and to spend some Hero Points to conduct some basic team attacks.

But they were simply too bad at working together. Or at admitting that “lesser beings” could be a real threat. 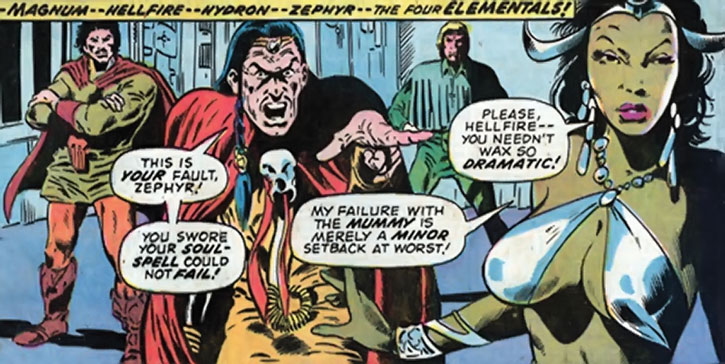 The Elementals seem to be fully immortal, and can speak and understand every language. The latter applies even to the incomprehensible croaking voice of the Living Mummy.

Simple attacks such as bullets or a punch in the face can occasionally affect them, but this only occurs when they are taken by surprise or otherwise disoriented. If they can see the attack coming and do not arrogantly dismiss it as being unable to hurt their godly self, they are superhumanly tough.

Their great mystical presence will also leave ordinary people awestruck or even in worship of them. This was an important part of their reign of terror in Cairo.

The Elementals are skilled occultists. They can conceive and execute on magical rituals. But this is more akin to a lengthy joint R&D project than an easy solution to short-term problems. The rituals they were sent using where :