If you’re not familiar with the New Salem storylines in Fantastic Four, you can check the Nicholas Scratch character profile first.

The nature of Eliminators is unrevealed. My guess would be that they are sapientCapable of intelligent reasoning golems clad in techno-magical armour and armament.

An Eliminator is a powerful hand-to-hand combatant. It could hold up to the Thing (Benjamin J. Grimm) in terms of speed, strength and durability. However, our stats assume that it would have lost a knock-down, drag-out fight against the ever-bashful Benjamin Jacob Grimm.

Eliminators are delivered in some sort of giant metallic egg. One was found empty and half-melted by the FF. What happens within that egg is a mystery. 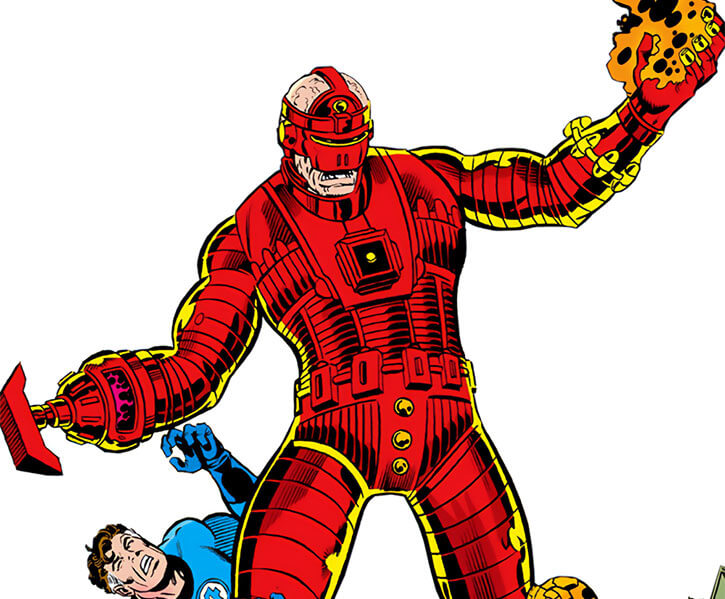 The Eliminator whom the FF encountered also demonstrated numerous weapons systems, which it used intelligently :

Eliminators are deployed by the witches of New Salem for specific security missions.

They seem to be sapient constructs. Eliminators possess a broad range of initiative and a clear ability for deductive reasoning.

Given their great power, one imagines that they might be created as a collective ritual undertaken by the population of the town. Perhaps focused through the Satan-Staff. Building their armour and equipment is presumably not a trivial task either.

The Eliminator encountered by the Fantastic Four stated that “an eliminator never fails”. That implies there are other such creatures. Or at least that this one had predecessors, since Eliminators are programmed to self-destruct once their mission is done.

One such Eliminator was sent outside of New Salem. That was after the mayor, Nicholas Scratch, convinced his constituents of the existence of a grave security breach. He argued that his mother Agatha Harkness had been leaking information about the town to outsiders.

Accordingly, Harkness was kidnapped to be tried. An Eliminator was then sent to erase all traces of her – including people who may have learned of New Salem’s existence through her.

In practice, this was essentially an assassination mission against the Fantastic Four. These were Harkness’s closest associates and had the power to threaten Scratch’s plans.

The Eliminator sniped the Human Torch from the sky. He then dumped the unconscious Johnny Storm in the Whisper Hill property formerly occupied by Harkness – where he intended to ambush and eliminate the FF. When they came, he tore the Fantasti-Car from the sky.

Is this the end of the Fantastic Four ?

But the three adventurers reacted more quickly than anticipated. They recovered the Torch a short time before the Eliminator came to confront them. Nevertheless, the powerful Eliminator seemed to win the fight and kill the FF.

It was a ruse. Reed Richards had deduced that the Eliminator would detonate once it had won, to blow all traces of Harkness to atoms in one blast.

Once the Eliminator triggered its irrevocable self-destruct sequence, the FF revealed that they were unhurt. They proceeded to run like hell, surviving the detonation by being far away and protected by a force field.

Intended to eliminate any possibility of outsiders finding New Salem, the plan completely backfired. The FF analysed the metal from the “egg” that had delivered the Eliminator and thus found out New Salem’s general location.

Eliminators are methodical, efficient combat machines. And they know just how powerful they are.

The tactics employed by the documented specimen were to :

Eliminators talk as big a fight as they actually deliver. The documented one also insisted that Eliminators never fail and are too powerful to be stopped.

“I am called – the Eliminator ! And for daring to interfere with my work… you must be destroyed !”

“The time for mindless battling is past ! Now I must strike in earnest !”

“I offered to make your destruction a painless one… but one way or the other, you will be destroyed !” 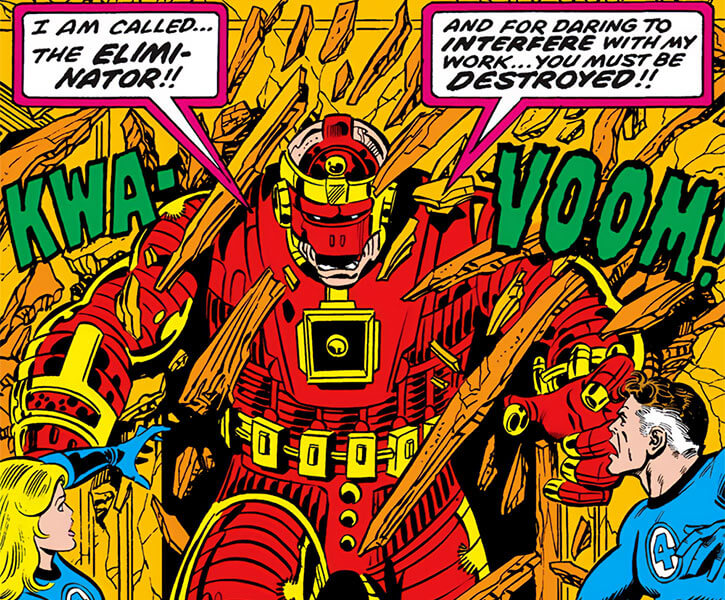 War body ● 34 points ● Descriptor: Magic and technology ?
– Feature (an Eliminator is larger and heavier than a man).
– Senses 1 (Extended vision).
– Immunity 3 (Emotion effects, Limited to half effect).
– 12 Ranks of Impervious for Fortitude.
– 8 Ranks of Impervious for Toughness.
– 6 Ranks of Impervious for Will.
– 2 Ranks of Lifting-Only Strength.
– Feature (an Eliminator can self-destruct. This is 19 Ranks of energy Damage at ground zero, diminishing by two Ranks for every Rank of distance from ground zero. This takes about a minute, is irrevocable once triggered, and roots the Eliminator in place until detonation).
– Feature (by spending a Move Action, the Eliminator becomes immobile but receives a +6 Special Bonus against all effects that would displace him using physical force. That includes the Staggered and prone Conditions. To become mobile again, the Eliminator must burn another Move Action).