Elsa Bloodstone seems to be roughly back to her early level of power, though with more experience and better skills.

Her amped power level as a Nextwave Squad operative has vanished. For instance, she can be hurt by firearms at close range, and wears a soft concealed vest against those. This strengthens the hypothesis that H.A.T.E. had temporarily enhanced her.

Bloodstone is not as heavily-armed as she once was, but still uses a sizeable arsenal. Her regenerative powers are still very low-key. They don’t seem to dull the pain and she’s as concerned with not getting wounded as any non-powered person.

She was not seen carrying melee weapons so far, though her great strength allows her to stab through human flesh with her naked fingers if absolutely necessary.

At this stage the continuity of the character is very confusing. This is a combination of :

Hopefully this will fix itself as Elsa appears in Legion of Monsters stories and a status quo emerges.

This profile makes a number of arbitrary calls as to which very minor appearances are not in continuity. There are more arbitrary calls about how to fit the Viva Las Vegas story with Iron Man in her continuity. It should have defined her post-Nextwave status quo, but its cancellation leaves it sticking out like a sore thumb.

Therefore the following take on what happens between 2008 (the end of Nextwave) and late 2011 (Legion of Monsters #1) is NOT OFFICIAL, and is just our best guess.

As far as can be guessed, Elsa Bloodstone took months to recover from her time as an agent of H.A.T.E., despite her regenerative powers. Since it would seem that her powers were amped somehow by H.A.T.E. (perhaps using MGH ), there likely were vast quantities of chemicals in her system to gradually flush out.

Elsa apparently roomed with Tabitha “Boom-Boom” Smith during that time. That was quite possibly because Smith had nowhere else to go. Though the two young women were not on good terms as Nextwave Squad operatives, they apparently got along much better as the bulk of the H.A.T.E. mind-altering treatments went away.

As she recovered, Elsa even took Tabitha on some minor monster-hunting work, including an excruciatingly minor recomposed human calling himself Franken-Teen.

In late 2009 Miss Bloodstone was operating solo in Prague. She fought against the murderous brood of Goram, a monster her father had killed way back then. One of the spawns managed to inject her with venom that produced a parasite Children of Goram inside Elsa. However, her regenerative powers soon killed it and she vomited the corpse.

Even more determined to never have children — as they would have to carry the Bloodstone burden of monsters-hunting — Elsa then massacred the rest of the brood.

This belongs to a museum !

Our No-Prize Hypothesis  is that it is at that point that Elsa Bloodstone attempted to distance herself from her dreary fate as an eternal monster-huntress. She resumed her college studies in archaeology – from context one gets the impression that she was a PhD candidate. Perhaps as a part of her academic pursuits, she became an archaeologist-for-hire.

In 2010 (by our No-Prize Hypothesis – the series was actually published in 2008), Bloodstone was hired as a freelance archaeologist. The job was to investigate an ancient Ba  tomb before it would be flooded by the titanic Three Gorges dam  on the Yangtze.

Thanks to locals who knew her father and were impressed by her knowledge of their area’s distant past, she found a colossal statue in one of the temple. Bloodstone determined that it was what her anonymous client was after.

Soon after she left, the enormous golden dragon statue located by Elsa was exhumed. It was then taken apart and reassembled in Las Vegas, as the lead ornamentation for the new Golden Dragon Casino.

Within days, an infestation of lizards converged on Vegas. Elsa realised that this was caused by the statue, based on some prophecies she had exhumed from the tomb to save them from the flooding.

Bloodstone flew in and contacted Tony Stark. She hoped that the ties between the Bloodstones and the Starks would encourage him to help determine who her employer had been. Stark did agree to put his economic intelligence teams on the job, though his chief reason for doing so was to impress the exceptionally attractive Elsa.

The giant dragon statue then animated, and claimed to be Fin Fang Foom. Iron Man suited up to engage him, whilst Elsa went back to her hotel, likely to pick her stuff up. What happened next is unknown and may remain so forever, as the series was interrupted or cancelled (presumably so writer John Favreau could shoot Iron Man II).

In any case, Elsa Bloodstone had to return to her familial destiny as a monster-huntress. Perhaps to distance herself from that role, she returned to her Nextwave look and resumed dyeing her hair red-orange.

Unexpectedly, she started having dealings with the so-called “Legion of Monsters”. The Legion was an effort to protect peaceful monsters from hunters so they could build a monster society underground. While Bloodstone hated monsters, she was rational about it. She appreciated that the Legion project was greatly reducing human casualties.

This tentative accord was threatened when Morbius, the de facto leader of the Legion, used a Bloodgem fragment to resurrect the Punisher (Frank Castle). Castle came back first as a rebuilt human a la Frankenstein, and eventually as a normal human being thanks to the regenerative power of the Bloodgem.

When she learnt of Morbius’s decision, Elsa was furious and barged in demanding to recover the fragment.

The leadership of the Legion complied with her wishes. By that point the Punisher had borne the Gem for months and was fully healed, so it was no longer needed. Furthermore Elsa explained that the Gem would now start twisting and amplifying Castle’s desire for revenge, drawing power from it.

When the leadership of the Legion confronted the Punisher, it soon became clear that he was indeed twisted and protective of the Gem. The incensed Ms. Bloodstone decided to just shoot him and take the Bloodgem by force.

The Punisher defeated her by exposing her to the touch of the nearby Man-Thing. However Jack Russell washed the acid off before it could do real damage and he and the rest of the monsters convinced Castle to just give up the Gem. The Punisher ripped the Gem off his chest, threw it to a recovering Bloodstone and left.

As of this writing, Elsa has resumed her alliance with the Legion of Monsters – in part due to her appreciation for Jack Russell’s human form. The Legion is threatened by black magic making many of the monsters living in their hidden community into mindless, savage murderers.

At first, Bloodstone was not entirely convinced she should help. But Morbius told her that a panic among the Legion community would result in monsters fleeing, then being hit by the curse – and massive casualties.

Having already intercepted, wounded and chased off one of the cursed monsters – who had killed four in Hertfordshire – Bloodstone joined the investigation. Her partners were Russell, Manphibian and her old ally N’Kantu the Living Mummy.

The illustrations where Ellie is back to her natural blonde colour are from one she tried to concentrate on being an archaeologist. All other appearances have featured the red-orange hair, tight burnt orange clothes and heavy leather coat.

The media references are mostly gone, and Elsa is no longer an inexhaustible motormouth. Presumably, she just grew up.

Early on after Nextwave, she was presented as the Marvel Universe’s Lara Croft. She was collected, sophisticated, very attractive, professional, observant and with extensive knowledge of her field.

Elsa has a strong sense of duty and accepts that her destiny as a Bloodstone is to forever hunt monsters. But she doesn’t like it and it’s a rather horrible and bloody life.

She harbours a genuine interest in archaeology, like her mum did. Ms. Bloodstone made a determined (but ultimately unsuccessful) attempt to become an archaeologist for hire specialising in field work in difficult areas where monsters might live. Her hope was to reconcile her two callings.

In Las Vegas she behaved in an understated, calm, simple manner. This may have been a result of spending months deep in Chinese countryside and re-acclimating herself to the big city. Or perhaps she was taking some sort of mood stabilisers or using meditative techniques to cope with the remnants of the H.A.T.E. chemical alterations to her personality.

In recent appearances Elsa is a brash, violent young woman out to hunt and kill monsters. She has a red button when it comes to her father’s legacy. When the Punisher ended up with a Bloodgem fragment, she insisted that all such splinters belonged to her dad no matter what.

She tends to use a lot of British English slang and turns of phrases, and swears a fair bit. However, she’s clearly no longer unhinged as she was with Nextwave and for several months afterwards. She can easily be reasoned with and is entirely willing to make compromises and not resort to violence if needed. 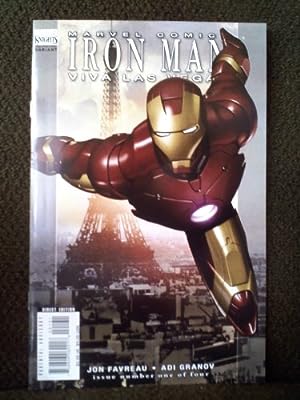 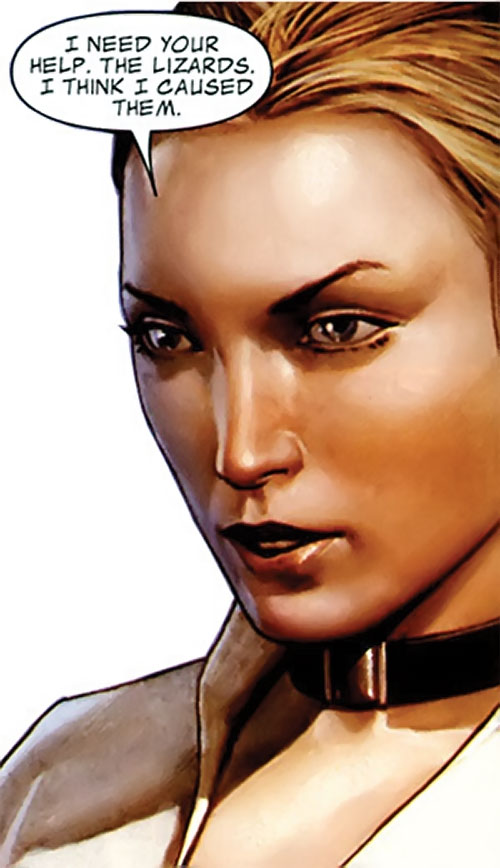 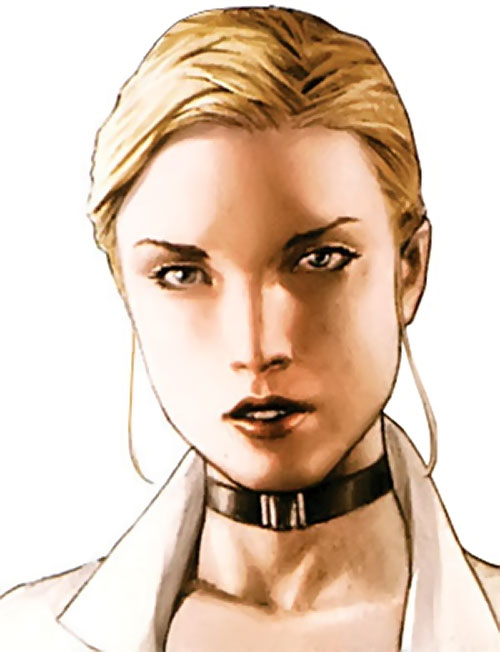 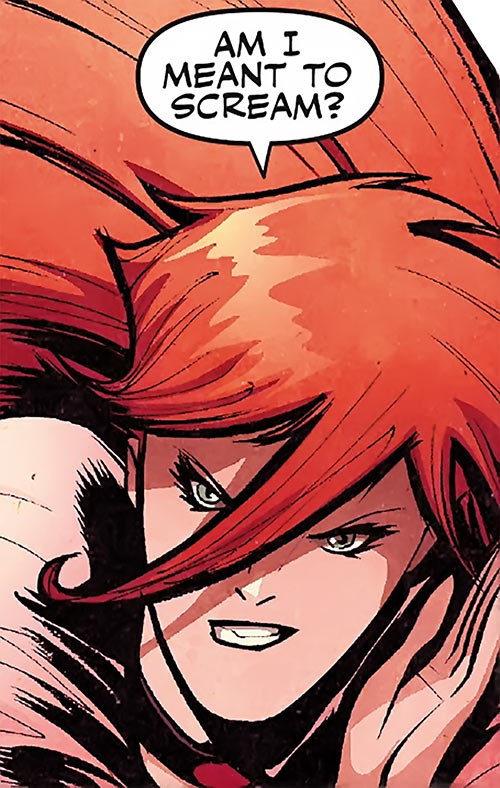 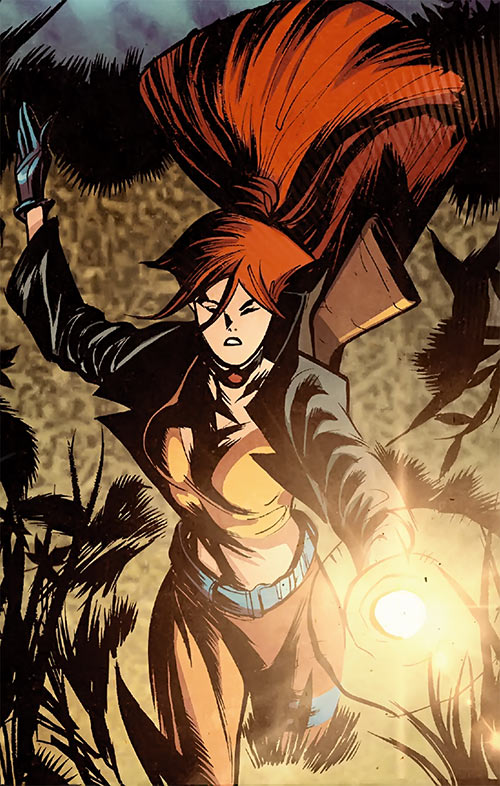