Purpose :
Revocation of their courtmartial condemnation.

Extent of operations :
Known space in the XXXth century, and beyond. The Legion has demonstrated organic capacities enabling it to conduct transtemporal and transdimensional  operations.

Bases of operations :
Mobile thorough FPU space and beyond.

Major funding :
Various resources liberated by the members, mostly on the black market.

Membership requirements :
All members had to enlist within the Foreign Legion, meaning no check as to actual identities, former criminal activities, and such. Once there, they had to be accepted for RIMA (marines) training and graduate from that training. Unique superhuman powers and an exceptional record or aptitudes made it possible to apply to the 2nd Shock Brigade selection course.

Previous purpose and goals :
Before incorporation in the military, upholding the heroic tradition started in the XXth century by the Fantastic Four. After that, peacekeeping and defensive military actions under the command of FMP-FPU.

Transports :
The Legion still has access to two dropships and one APC :

Individual equipment :
Legion members still use their former gear, such as :

This is the Legion in the universe of the Aliens movies, particularly the second one. It is close to the Bierbaum period when the Legion was hunted by the authorities, except that the universe is way grittier, and that this Legion is heavily militarized – it is in fact an elite Marine unit.

The timeline is pretty close to the normal Legion timeline, the main changes being cosmetic. The major changes are as follow :

Ayla, Imra and Rokk met each other in a Youth Emergency Rescue Company (YERC). YERCs are popular, corporation-sponsored paramilitary teams for kids which conduct disaster relief operations, logistics for the actual corporate military and police forces, criminal awareness drills and such.

YERCs are widely considered to be the best way to gain meaningful corporate employment without a diploma. This particular YERCs was a recruiting ground for Brande Industries, a major corp.

The moment of glory came for the three kids during an extensive manhunt for a superhuman criminal, which was able to outfight corporate security forces and the Science Police. Their three-man YERC team managed to track down and subdue the criminal, and they became instant media stars.

All hailed the generous, civic-minded move of Brande which gave its most brilliant young potentials to the cause of law and order. The contract was signed as the publicity became a further element in the negotiations. Ironically, the weapons sold to the Science Police later proved to be substandard junk.

Ayla, Imra and Rokk became a small, efficient paramilitary force for the Science Police, and soon were joined by a few others. Another high-profile case happened when they stopped Khund scout forces near Earth, with proof that an invasion was planned.

The small team was then transferred by the United Planets (simply the successor of the UN, not a multi-planetary government) from its law enforcement arm (the Science Police) to its military arm (the Forces de Maintient de la Paix – Fédération des Planètes Unies (Peacekeeping Forces – United Planets Federation) for a reconnaissance mission.

The mission found itself in the path of the Khund invasion and had to retreat with precious information. It proved instrumental, a short time later, in defeating the Khund forces, particularly after the extremely powerful Laurel Gand joined forces with the team and accepted to enlist.

enlisting in the Légion

After the invasion, the team was accepted into the Légion Etrangère. Financial disputes with Brande Industries over trademark issues ruined them beyond all hopes of recovery). Predictably, the youths excelled during their training and became part of that elite army. They were proud to uphold the centuries long traditions and rich history of that corps.

Over the years, the ever-growing Legion fought many a high-profile battle and solved numerous cases in their military intelligence or Science Police liaison role. Eventually this unit was simply called “the Legion” by civilians, standing as a symbol of the excellence of the Légion Etrangère.

More recently, the Legion was framed in a vast conspiracy within the FPU, and had to desert so as not to be terminated. They now operate as outlaws and terrorists, and are only starting to unravel the conspiracy that almost brought them down. 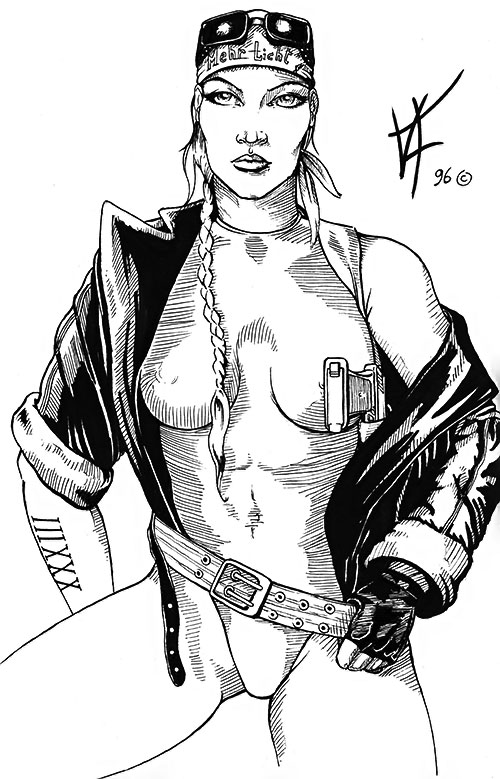