The Emerald Eye is one of the recurrent enemies of DC Comics’ Legion of Super-Heroes. It first appeared in 1967.

The Eye’s nature has been retconned  several times. These here notes are specifically about appearances set in the XXXth century, for a few years after the 1994 reboot to LSH continuity.

If that sounds confusing, a/ yes it is and b/ you could check our Ages of DC Comics explainer.

The Eye is immensely powerful, possessing mystical powers second only to Mordru himself.

The Eye needs a host to function, and the host must accept the Eye on it’s own. The Eye then slowly seduces the host, and, if necessary takes control of them.

The Eye tries to build a power base to protect itself from the one being whom it fears: Mordru.

The Emerald Eye of Ekron is a mystical artifact. It is sentient and seeks to control human bodies as outlets for its energies. It is attracted to strong emotions, such as insecurity or desire for revenge. The Eye also prefers to seduce its subjects rather than take control of them against their will.

Its origins are unknown. But the Eye is known to have existed since at least the XXth century, when it enslaved two members of the law-enforcement group L.E.G.I.O.N.. Some speculate that the Eye is what remains of an entire mystical creature.

The eye is almost totally indestructible. Even if someone with great strength manages to shatter it, it can re-form itself.

The Eye is known to have been on the planet Venegar as recently as the XXVIIIth century, where a planetwide civil war was fought over it. Its next known whereabouts was on the Sorcerers’ World in the mid-XXXth century. There, an extremely powerful sorcerer named Mordru controlled it.

Mordru was deposed with the help of a sorceress named Mysa, but not before Mordru used the Eye to drain her of her vitality. Mysa eventually empowered the Legionnaire Kinetix to seek it out for her.

After that, it somehow wound up in the possession of the maniacal collector Scavenger, in a container that neutralized its energies. During a fight between the Scavenger and the Legion, the Eye was freed from its container. It was attracted to the Legionnaire Shrinking Violet. It lent Violet confidence and power, and seduced her, playing on the self-loathing of her passive nature.

It took hold in Shrinking Violet’s mind, making her gradually more aggressive and confident and fulfilling her commands. When Leviathan died fighting Doctor Regulus, she threw away all inhibitions and used the Eye openly in a vain attempt to revive him.

The Eye then took complete control of her, seeking to remake the Earth in its image, using her and the Legionnaires as its agents.

But when the Legionnaires resisted, it was dismayed. Violet, whose wish was for a unified Legion, became horrified at the in-fighting that her actions under the Eye’s influence had triggered. She demanded that it turn back time to undo it all, and this request caused an explosion which sent several Legionnaires and others back in time.

It carried Violet away from the blast to strengthen its hold on her.

Grab on and hold

The Eye, with Shrinking Violet securely in its grip, detected the escape of its former master Mordru from his tomb. It sought to keep its newfound freedom. When Shrinking Violet tries to break free of its hold shortly afterward, the Eye convinced her to stay by showing her Mordru’s power. It also showed what he would do to them if they separated and lessened their power.

When Mordru finally found them, the Eye knew that his power would eventually overcome them if they insisted on fighting him. Instead it got Shrinking Violet to merge with it completely and, as a combined being, offer themselves to Mordru as a mate… an offer Mordru considered accepting.

When Mordru created a dome around the two of them to give him privacy in which to contemplate the offer, the Eye and Violet created a weak spot in it. This is how the assembled heroes were able to break in.

Violet and the Eye were spirited to another dimension , where Legionnaire Sensor and Mysa managed to separate Violet from the Eye. Mysa then used the Eye in battle against Mordru. So did Violet later on, ordering the Eye to transport itself to somewhere where Mordru would never find it when it seemed Mordru was on the verge of gaining control of it.

The Eye returned briefly to torment Violet a few months later. But Violet showed the Eye that she had the inner strength to resist it.

In turn, the Eye sought out a new host: the Empress of the Fatal Five. The Eye consigned itself to the role of a servant, and acted on whatever commands the Empress gave it.

A big eye with a green pupil.

When it acted on it’s own, the Eye was seductive, using its power to corrupt and control.

The Emerald Eye of Ekron

Drawbacks:
CIF (Mordru), CPR (The Eye has no arms or legs, and therefore has a Str of 0 and cannot make any actions involving Str; it moves by flying), Miscellaneous: The Eye has recently resigned itself to become subservient to it’s host. It does not speak or use it’s Charisma skill or Leadership Advantage. It acts at it’s hosts initiative, and will only do what it’s host tells it to (thereby limiting it’s power to it’s host’s creativity and cunning). 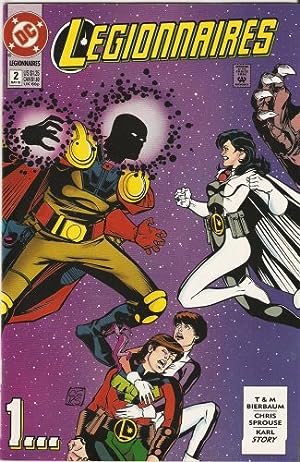