Her youthful appearance often leads people to underestimating her strength. Even vampires, who should know better.

In the vicinity of Durham

Chekhov is a vampire. She was sired by the head of the Selene family (no relation). That makes her more powerful than most vampires.

It also means that she’s not subject to degeneration. Vampires whose sire is more distant from the original Selene (no relation) bloodline become warped over time.

Her observed capabilities are :

Vampires can only be slain through massive physical trauma. Preferred methods include :

Exposure to sunlight might be fatal. The specifics are not known.

She uses a wrist-mounted crossbow as her weapons. This seems intended to get wooden “stakes” into hearts silently and at a range. She is seen hitting with multiple bolts, so this weapon is a repeater with a fast action. It only *looks* low-tech.

She often rides a standard-issue Russian military mount. This is a sort of fast, agile, flying motorbike styled to resemble a stylized horse.

The most fitting thing I can think of is some blonde pop vampire metal.

Yes, it’s a genre now. One that benefits from loudness.

The Selene family of vampires has been around since the XVIIth century. They terrorised their area for a thousand years.

After the Russian resurgence, they became allies of the Tsar. He occasionally employed vampires as assassins.

In return, the Russian Empire set mirror satellites in geosynchronous orbit over the Selene fief. The land, now called the Darklands, was thus plunged into a permanent night. This may be what allowed the Selene to develop further.

The main local “industry” was to breed an imprisoned human population, for the sole purpose of drinking their blood.

The Selene family also could use the satellites to extend the nocturnal area a bit. This was a great weapon to attack people close to their borders.

Much of the population is human chattel. They are bred to be passive and subservient, and live in terror. They are kept in good physical health so their blood is more nourishing. Emmanuelle called them “blood-thralls”.

The bulk of the minor vampires look more or less like Michael Morbius, albeit with vestigial bat-like short membranes between their ribs and elbows. They do not seem more powerful than a strong man, and are unarmed. However, they are difficult to take down. They are but naked savages obsessed with feeding, and smell horrible.

Some vampires are removed enough from an original vampire lineage as to have mutated into bat-like forms. These degenerated humanoids can fly just like a bat, and may be capable of echolocation.

The main buildings are the gulags used to breed the chattel. These seem to be Gothic-style castles that have been partially overhauled using a Brutalist, concrete-happy style. The main one was primarily accessible by cable car.

Another feature was the torture garden. The “trees” in this small forest were mineral in appearance, and presented numerous jagged edges and spikes. A person moving quickly through this terrain would receive numerous cuts. This meant the scent of blood in the air, providing pleasant stimulation to pursuing vampires.

The vampiric rabble seemed to live in caves and crude yurts.

Emmanuelle Chekhov was turned into a vampire decades ago, while in her late teens. Her sire was the patriarch of the Selene family, which makes her one of his metaphorical “daughters”. There is an implication that Selene had a sexual interest in Chekhov before he made her deathless.

In unrevealed circumstances, she escaped and became something called “the Imperial Slayer”. No details about that are known. Perhaps she worked for the Tsar, destroying vampires from bloodlines not allied with the Empire.

The Imperial Slayer was seen in 2670. By that point she seemed to have deserted the Imperial military, and joined the rebellion led by the powerful Romanov house. She wore what seemed to be a Romanoff uniform, and worked directly with house patriarch Dmitri Romanov.

A possible explanation is that she was recruited when offered the opportunity to strike against her sire and her “siblings”. Removing the Selene family from the war was something that benefited the Romanov, but that the Tsar would never allow Chekhov to do.

Emmanuelle Chekhov was paired with Nikolai Dante a.k.a. Nikolai Romanov, a superhuman fighter with an otherdimensional  rifle. Between the two of them, they were a match for the Selene family.

Destroying the Selenes would greatly weaken the Darklands vampires, allowing Romanov anti-vampire units to exterminate the rest. And once in control of the Selene fortress, the satellites could be deactivated to restore sunlight to the Darklands.

As they infiltrated the Darklands, Chekhov and Romanov found a blood camp. Romanov opened fire, destroying lesser vampires to save blood-thralls. This resulted in a major vampire attacking. However, Sebastian Selene underestimated his “little sister”. She slew him and drank his blood.

As the hunters reached the main castle, Mr. Selene and his three “daughters” were distracted. They were hunting prize preys – survivors of the Rudinshtein Irregulars, a suicide squad once led by Nikolai. This facilitated breaching the fortress.

Have fun storming the castle !

Romanov slew one Selene “daughter” whilst she was busy stalking the Irregulars. He then destroyed the other two by unexpectedly turning his hands into deadly blades. However he had to retreat when faced by the patriarch, who also ran Emmanuelle through with his claws.

The surviving Irregulars, Romanov and the fatally wounded Chekhov fled by cable car. However, the patriarch intercepted them. But this time, Romanov managed to kill him with his Crest.

Emmanuelle wanted to die. Drinking Sebastian’s blood after biting him to death starkly reminded her of her monstrous nature. But Nikolai refused, and exposed his slashed shoulder. By carefully licking the wound without biting, Chekhov drank enough blood to heal without infecting Romanov.

Emmanuelle had to leave before the sun was restored over the Darklands, for obvious reasons. But she was delighted to have seen the fall of the Selene house after so long, and even gave Nikolai a little parting kiss.

By the next year, the Tsarist forces won the civil war. However, Earth was such a hot mess by that point that Emmanuelle likely evaded attempts at retribution for her desertion.

Especially if she did the next logical thing – warring against vampire families not aligned with the Tsar.

Emmanuelle looks like a pretty youth… but one with cold, defiant eyes and a stony-faced expression. Her body language is rigid and hostile, but becomes animalistic in combat.

She usually operates in a military field uniform. Howbeit, Russian resurgence uniforms are elaborate affairs reminiscent of the Napoleonic era.

A cold-blooded, gloomy, reserved assassin and commando. She has seen many horrible things, and prefers to work alone.

Emmanuelle detests her own nature. She did not want Nikolai to see her feeding on her “brother”. Once she saw that her sire had been killed, she wanted to bleed to death as she saw herself as being just as bad as the other vampires.

However, once she saw the liberation of the Darklands, she felt much better about herself. She seemed downright mirthful about seeing the blood-thralls freed, to the point of flirting with the attractive and manly Nikolai.

“Don’t waste your time trying to reach them [with words]. There’s nothing human to reach. Whoever you knew no longer exists. No matter what games they play with your mind, they’re the deathless now.”

(When asked about crucifixes and vampires) “We live in a godless world. Fire and steel are the only ways to make sure.”

Nikolai (flirting before the assault): “How about a kiss for luck ?”
Emmanuelle: “My kisses are not lucky.”
Nikolai: “Mine are !”

“Enjoy the sunrise, Nikolai Dante… and think of me in the shadows.”

Drawbacks:
Something about the sunlight, but we have no data about how bad it is. Plug in a Fatal Vulnerability if needed, it can’t be too far off.

From the fights in the story, modelling the vampiric durability through simple elevated BODY works fine. As the saying goes, “a wooden stake in the heart might destroy a vampire, but then it’d kill you just as well so don’t be so smug about it.”

The Skills are on the speculative side.

Having only air vehicles is Limited 1 rather than 2 since the “horses” effectively replace land and sea vehicles.

Source of Character: Nikolai Dante TPBs (this story is in Tsar Wars, Vol. 2).

Writeup completed on the 2nd of February, 2018. 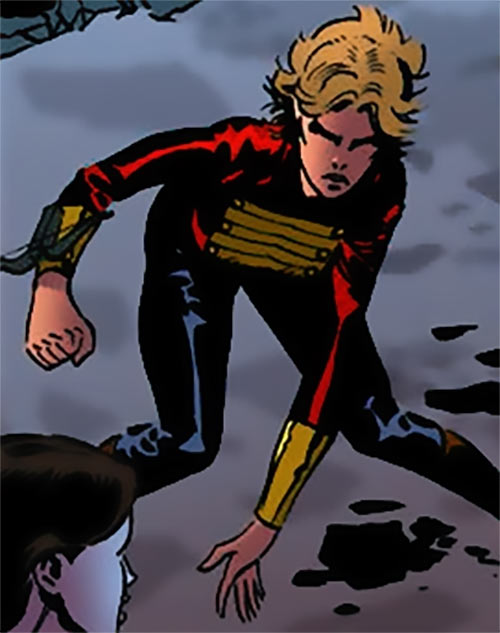