Empath can psionically alter the emotional state of another person. He has been demonstrated to be powerful enough to affect people with massive psychic defenses, such as Magneto, but once people realize something is amiss they usually immediately recover their own mind.

His emotion control is powerful enough to share ground with the DC Heroes RPG’s Hypnotism power. One telling example is making people not wanting to remember about seeing him.

Later descriptions of the power have emphasised that Empath actually manipulates the brain’s biochemistry. In this version, de la Rocha has the detailed neurological knowledge to identify which compounds he’s blocking or encouraging the secretion of. Thus, de la Rocha’s ability seems to be a mix of telepathic empathy and specialised telebiokinesis.

Empath has some ability to escape telepathic detection, but one story attributes this to the Hellion costume. It’s hard to tell from the material.

Hailing from Spain, Manuel de la Rocha is a mutant who attended school at the Massachusetts Academy. He was one of the original students of then villain, the White Queen (Emma Frost). Frost’s students, who were known as the Hellions, were rivals of Charles Xavier’s students, the New Mutants.

Empath was one of the most dangerous students. With his ruthless ambition and haughty, manipulative nature, Emma Frost considered him to be a natural to join the inner circle of the Hellfire Club — provided she didn’t have to kill him first.

This nearly happened several times. In particular, he decided he didn’t like special student Firestar (Angelica Jones). Thus, when Thunderbird attempted to avenge his brother by killing Professor Xavier, he decided to have a bit of fun by manipulating Firestar, the X-Men and nearby military forces.

The brazen Empath, incensed at her reprimand, tried to make her his lover using his powers, but was swiftly brought down and had his powers psionically blocked for a while.

Empath got his powers back shortly after that, so he could play a crucial role in a plan from the White Queen. Standing outside of the X-Mansion with binoculars, he emotionally manipulated Magneto, then the headmaster of the New Mutants, until he decided to hand over his charges to Frost.

Empath also manipulated the New Mutants, who had recently been traumatised by an encounter with the Beyonder, so only Mirage realised it all was wrong.

Empath was discovered by Tom Corsi and Sharon Friedlander. But he made them madly in love with each other and sent them away. Tom and Sharon narrowly survived the week-long trip into sensual hunger he sent them on, and managed to drag themselves to the X-Mansion.

Their return made Magneto realise he had been manipulated by Empath. The New Mutants were recovered despite the powerful interference of the Avengers, who though Magneto was still a villain trying to kidnap students from the Mass Ac.

Friedlander and Corsi remained badly damaged by what Empath had done to them, however, and the New Mutants eventually decided to launch a punitive raid against Empath. Using both Limbo and the Danger Room as nightmarish settings, they took Empath through a terrifying grind to punish him. But they soon lost their taste for revenge and handed him back to the Hellions, who promised to keep him in line.

During his tenure with the Hellions, de la Rocha met and fell in love with Amara Aquilla, the New Mutant known as Magma. Aquilla eventually left her team and became a member of the Hellions, so that she could be close to de la Rocha. De la Rocha even accompanied her back to her home in Nova Roma.

The romance ended, however, when Aquilla began to suspect that de la Rocha was using his abilities to control her emotions. And in fact he was.

When the colony of Nova Roma was discovered to be a ruse by the witch Selene, Empath used his abilities for a time to convince Magma that was a hoax. This set a bond of mistrust between the two that would never be broken.

De la Rocha was one of the few Hellions to survive an attack by time-travelling villain Trevor Fitzroy.

Some time after the massacre, Empath joined X-Corporation. He became the Communications Director for the Corporation’s Los Angeles chapter along with his former lover Magma.

During that time, he became addicted to the mutant drug Kick, and betrayed X-Corp for a fix, but he seemingly recovered from this. Eventually, after M-Day, Cyclops ordered the closure of the X-Corporation headquarters to better focus all available resources while protecting their members and allies. Empath was one of the few mutants to retain their powers in the wake of House of M.

Cyclops used him immediately to reel in Magma after M-Day who, in her devastation on the loss of her boyfriend because of the depowering, had wrecked a South American village. He is currently staying at the Xavier Institute along with the other 198.

However, his shared history with Magma has led her to be convinced (yet again) that he is toying with her emotions at every possible instance.

After he left the Hellions, Empath mostly wore expensive suits, shirts and ties, often of a light colour.

De La Rocha is an aristocratic, arrogant playboy, and displayed a racist streak toward Jetstream. He thinks of himself as better than and above anyone else, except for such powerful mentalists as the White Queen, and is highly ambitious.

Empath is widely considered to be the most evil of the original Hellions. He likes creating chaos and suffering, he likes humiliating and controlling people, and so on and so forth. He’ll often manipulates nearby armed humans into being his foot soldiers.

Empath is also fond of turning allies against each other — which is as simple as turning friendship and loyalty into burning hatred.

As Xavier noted : “People, to him, seem no more than objects, servants provided to gratify his needs and whims. Toys provided for his amusement. If he perceives an insult, he generally attempts to avenge it in the cruelest, most hurtful manner possible.”

He’s quite haughty and cruel, but lacks the stomach for extreme violence. When Wolverine successfully Intimidated him and went snikt an inch away from his face, Empath fainted.

One of Empath’s disgusting character traits is his propensity for manipulating pretty young women into becoming his lovers — like he did with Magma or Firestar. He’s a slimy serial rapist, emotionally and physically.

When the shellshocked New Mutants joined the Hellions, his first move was to step into the girls’ locker room and enthrall everyone. This included Wolfsbane, who was at best 14 at that time.

He thinks nothing about hurting children, either. He once made kids mortally afraid of one of their friends who had made an innocuous anti-mutant comment, intending to punish the kid for months for saying this.

However, a part of this behaviour seems to come from De La Rocha’s Empathy power, which is always on. Being permanently bombarded with conflicting emotions from everyone, he determined that things were easier from hin if everybody regarded him in the same way — and the most reliable way to achieve this was to be hated by everybody.

How much of De La Rocha is self-defense, and how much is him truly being an evil creep, is unclear.

“The dog dared lay his grubby hand on a de la Rocha ?! He will dearly pay for that insult — and who better to exact my revenge… than his pretty companion ?”

“You love me, don’t you, my angel ? You’ll do whatever I ask, without question or hesitation, because you want more than anything to make me happy and to protect our fellow Hellion, Thunderbird, from the evil X-Men, isn’t that true ?” (kisses Firestar)

“Nobody addresses a de la Rocha in such a manner. We do not obey – we are not lackeys – we command !”

“Ha ! You think I can’t tell what you feel ? Don’t feel it from you ? I feel it all ! Everything, everyone around me feels. Tarot. You. I’m bombarded with it. Believe me, I know… much more than I want to… about how you feel.”

“Poor Magneto – so lost and confused. Hardly his true self at all. Thanks to me. The master of magnetism is reputed to be one of the most formidable mutants on the planet — even the White Queen respects his power… yet he is putty in the hands of Empath.”

“Sometimes I can’t tell the difference. What other people feel is what I feel. They assault me with conflicting emotions… needs… desires… signals all around me till I can’t breathe… and I grab hold of one emotion… any emotion… and use it to block out all the others. And I’m in control… not threatened… not overwhelmed… not afraid. I’m a coward, so I take the coward’s way out. It’s self defense, it’s rotten… but it lets me breathe.”

“You are quite right. I am doing this. I’m increasing your serotonin and dopamine levels, reducing stimulus of the locus ceruleus. I’m doing exactly what a doctor would do right now, but without medication, no drugs, nothing synthetic or artificial.”

Drawbacks:
MIA toward abusing his power.

Equipment:
Occasionally carries good binoculars when he wants to influence a person’s emotions from far away. 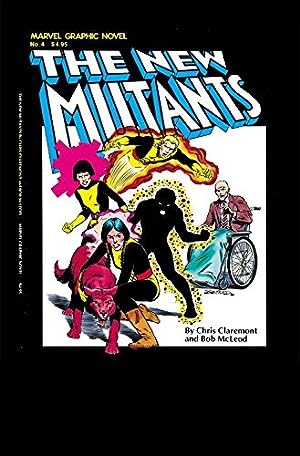 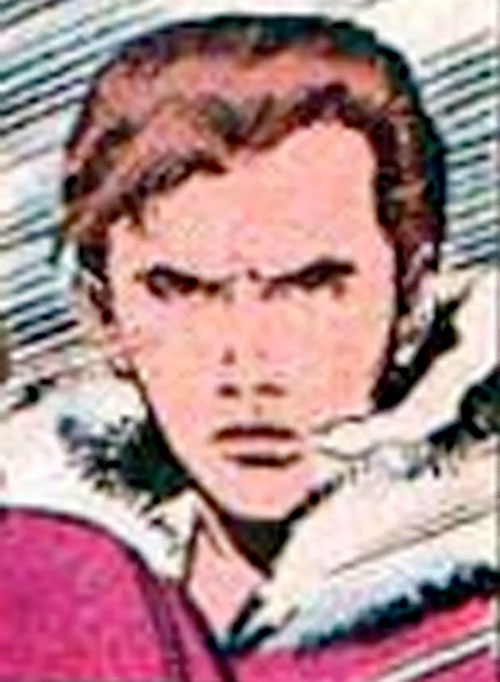 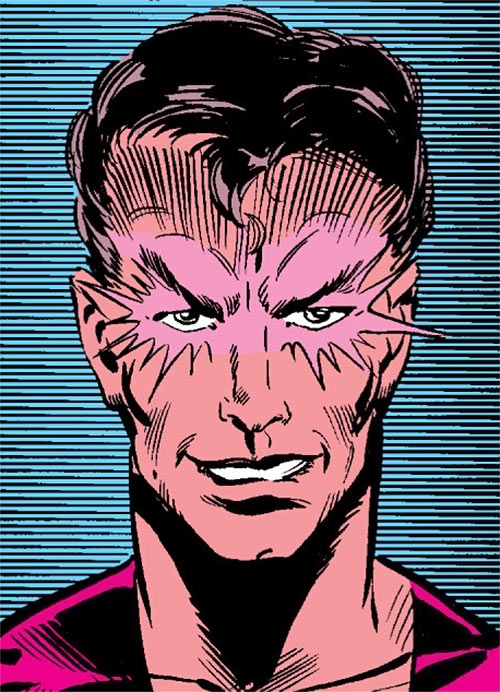 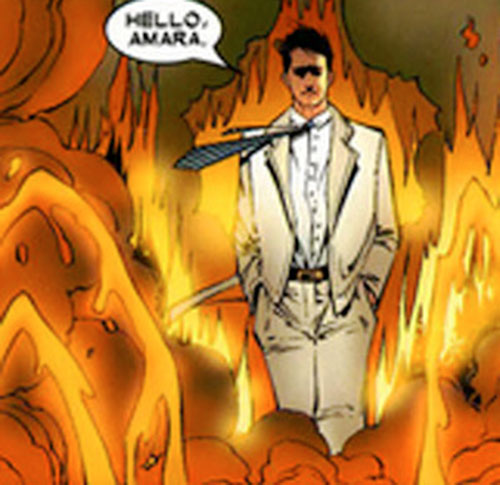 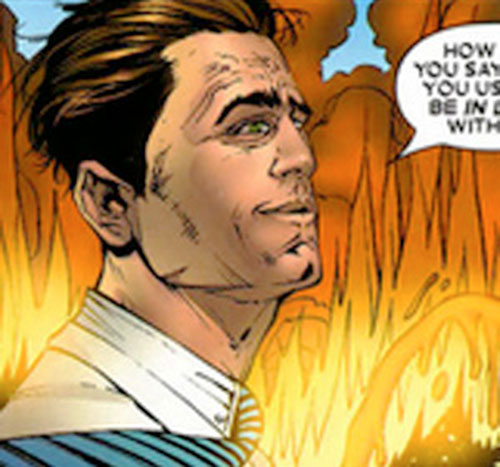