Tom Wilkins is an experienced security chief, and is unusually tall. He has significant technical skills. Howbeit, the advanced functions of his suit apparently came from stolen components – as opposed to being his own work.

When in costume and thinking of himself as a macho ultra-competent super-villain, he has a remarkable ability to seize the initiative in battle. This disappears when he’s just Wilkins.

During his 2013 appearance, he was described as a genius in thermodynamics. This likely wasn’t yet the case during his first appearance.

The Endotherm suit has impressive powers of heat manipulation. Wilkins used it for :

Those effects are powerful enough to take out even Iron Man, given enough luck.

Endotherm also has a handgun that shoots a stream of diamond-hard ice darts.

Endotherm further relies on his decisiveness, strategic acumen and knowledge of the battlefield. He knows he’s vulnerable to direct attacks, and will thus extensively manipulate the environment (fog, ice-covered floors, always using cover and moving ahead of slowed-down opponents, staying indoors to hamper flying opponents and have the fog stick around, etc.).

As a result, laying a hand or blast on him should be difficult.

When seen in 2013 he seemed to still be in his physical prime. Since another thermodynamics expert, Gregor Shapanka a.k.a. Blizzard, did suspend his own ageing using live cryogenics it is possible that Wilkins achieved similar results.

He was also wearing a new version of his Endotherm suit. It now was a power armour  with enhanced strength, jet boots, etc.. It also came with an enhanced version of the heat-draining abilities of the old Endotherm costume.

Tom Wilkins was the head of security for the London research and engineering labs of Stark International. During the late 1970s, with retirement but a few years away, he felt a paranoid fear that his considerable pension would be taken from him.

Wilkins’ undiagnosed condition degraded. He became delusional. He was convinced that there was a plot to defraud him of his pension by framing him for a major fault. And this plot was headed by Tony Stark.

Wilkins hid his obsession. However, in 1980, he allowed a guard to leave his posting, as the man’s wife had just given birth. An industrial spy seized this occasion. An unethical competitor of Stark’s used the spy’s photos to release a product before the S.I. version was ready.

Wilkins’s paranoia flared up, as he expected Tony Stark to come and take his pension away. In preparation, the security chief stole numerous advanced components. His goal was to develop a powered suit with which to kill his employer.

His schizophrenic symptoms were exacerbated. He became unable to deal with ordinary life, and started answering imaginary phone calls from a made-up crime boss.

Stark did come to London. But he had no intention of firing Wilkins. However a lengthy argument over the phone with the imaginary mobster convinced Wilkins to kill Stark immediately. As Endotherm, the sick security chief almost overwhelmed Iron Man (Tony Stark). But he was defeated.

Tom Wilkins was institutionalised. According to Stark his pension was amply sufficient to cover the necessary psychiatric treatments. Apparently his state was stabilised, but he remained paranoid.

Fly me to the moon

Wilkins apparently resumed technical and scientific studies. He became reputed as a genius in thermodynamics. During the early 2010s, he was hired by Eli Warren’s company to work on the Tranquility Gulch lunar base. Wilkins’ work focused on processing heat from direct exposure to the sun during the lunar day. 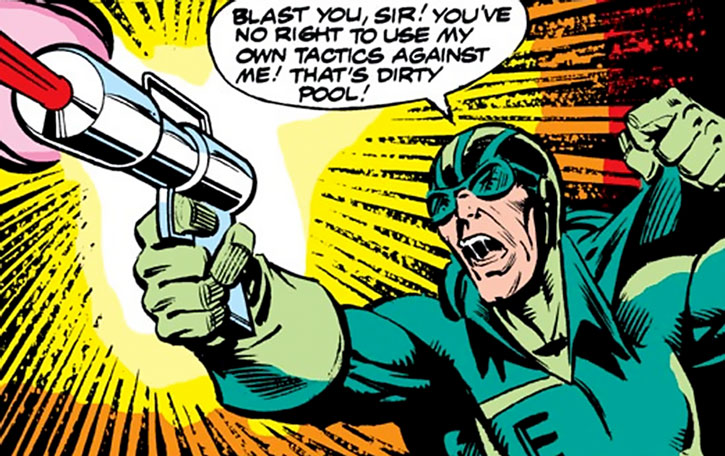 When Iron Man became the Gulch’s “sheriff”, Tom Wilkins’ paranoia again flared up. He became convinced that Stark was behind the 2008 recession and the disastrous policies that followed in Europe.

Equipped with a much more powerful Endotherm suit, he attempted to kill his former boss. Wilkins again gave the Golden Avenger a tough fight. But he was defeated, thanks to the intervention of Udarnik.

Wilkins is deeply mired in schizophrenia and paranoia – denying reality and substituting his own. In his imaginary world he is a big time, powerful super-villain connected with the most dangerous mobsters in the UK.

After his treatment, he was still delusional but not schizophrenic.

(To Iron Man) “Oh, but it’s no ‘game’, your metalness — it’s strategy ! For not only do the thermal control components I stole from Stark enable me to absorb heat — they also allow me to release that absorbed heat at will ! And when such extreme heat suddenly strikes the extreme cold I’ve created, the result is a most gratifying… explosion !” (PUH-WHUMP !)

(Over a non-working phone, to the hallucinatory Big Boss) “Very well, then I’ll just show you the stuff I’m made of ! I’ll kill both Stark and Iron Man ! While you, you cowardly milksop, can bloody well go to blazes !”

“Blast you, sir ! You’ve no right to use my own tactics against me ! That’s dirty pool !”

Bonuses and Limitations:
Enhanced Initiative is a Skilled Power, and only works whilst wearing the Endotherm suit and being in the Endotherm mindset.

The ENDOTHERM SUIT is quite powerful, and Wilkins has a surprising number of HPs for a one-appearance villain. Defeating the Mark V Iron Man armour with heat and cold requires a lot of raw power.

Beware of his high APs of Temperature Control if you use him in your campaign. If the PCs have single-digit RVs against temperature extreme, they’re going to be slaughtered.

There isn’t enough material to accurately gauge the changes, but here are notes :

Writeup revised and updated on the 7th of April, 2014. 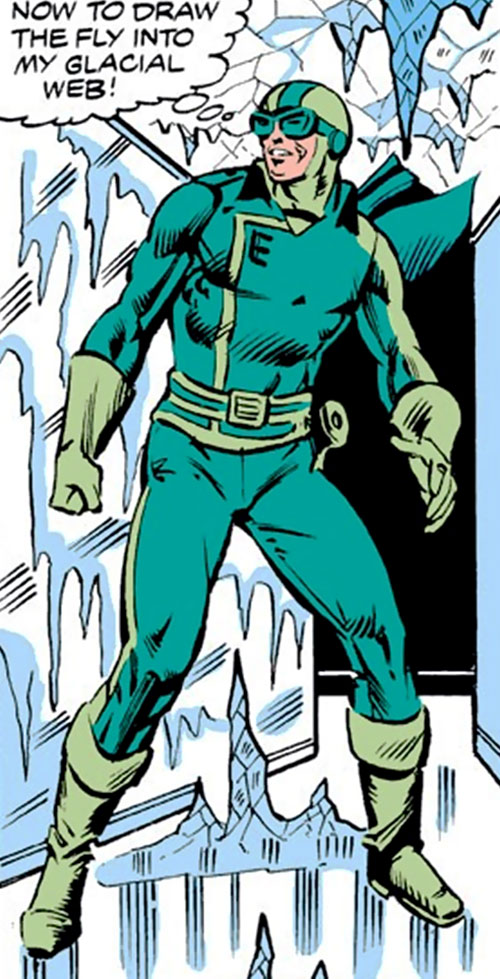 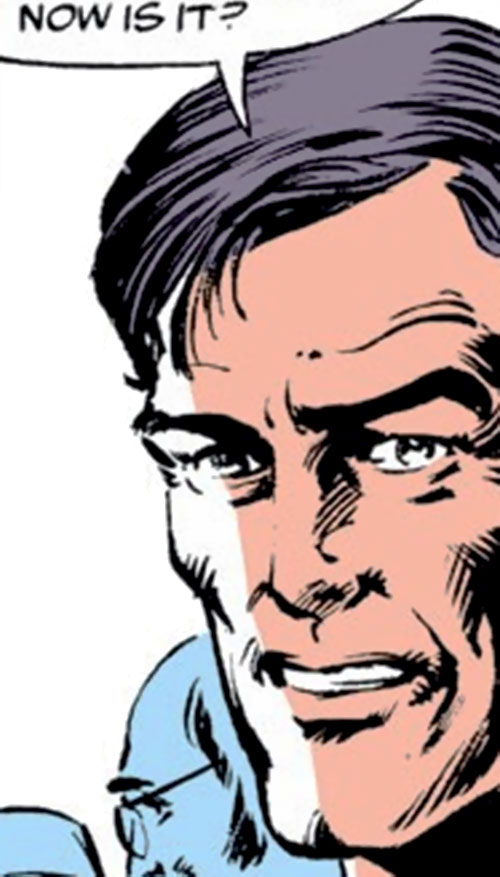 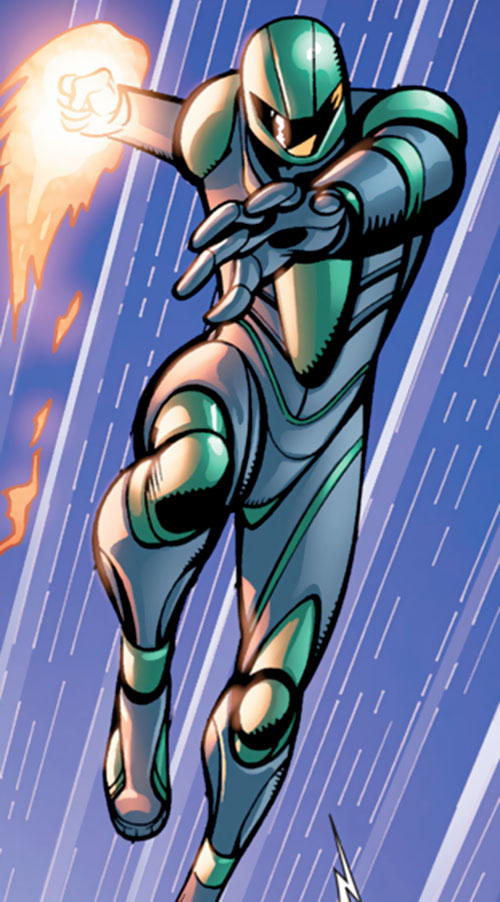