This profile is meant to be read after our Power Pack team profile.

Katie Power can convert matter into raw energy. She severs the molecular bonds of any matter (solid, liquid or gas) that she can touch with her hands.

The process releases the matter’s potential energy, which Katie absorbs into her body.

When Katie absorbs enough energy, her body will radiate a bright golden light. 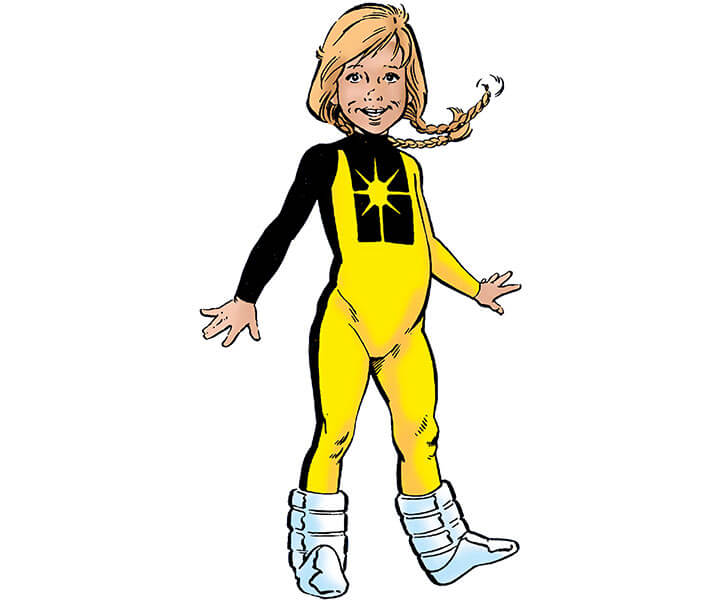 Katie can expel the absorbed energy from her body at will. When she does so, it erupts from her chest in the form of concussive blasts of energy. She has nicknamed them “Power Balls” due to their spherical shape.

The destructive power of each blast is proportional to the amount of energy Katie has at hand. Under normal circumstances, she can bring down a building with multiple balls.

Her most powerful blast rendered Kurse, a Kryptonian-classOn the same general power level as Superman being, unconscious.

Finally, Katie’s body heals at an increased rate. She can recover from broken bones within days and has a high degree of immunity to disease. With concentration, Katie can increase her healing rate exponentially.

Katie wears a special uniform, created by the smart-ship Friday. It is stored “Elsewhere” until she commands it to materialize.

The costume protects her from temperature extremes, is highly resistant to tearing and has a transmitter within it that allows her to communicate with Friday.

The costume also has pockets which are actually apertures into an adjacent dimensionOther realms of existence that are not our universe. Katie can store and retrieve objects from the pockets which clearly should not be able to fit within them. The maximum carry capacity of the pockets is unknown. 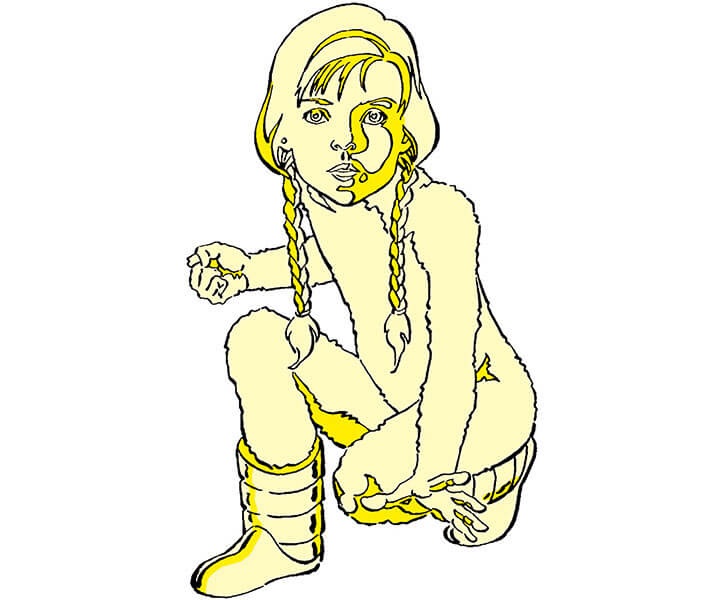 She has a “cute as a button” nose, and a dynamite smile.

She’s of average height and weight for her age group.

Katie’s costume is a bright yellow unitard that covers her from neck to boot. The right sleeve of the unitard is pitch black, as well as a stripe that runs down the right side of her body and a square patch that runs from her neck to the middle of her torso. Within the centre of the black patch on her chest, is a stylized picture of one of her power balls.

A pair of silver ridged boots complete her costume. The boots are reminiscent of those an astronaut may wear.

In many ways, Katie is a typical six year old. At any given moment, she can be: kind, generous, excited, loud, sensitive, jealous, bratty, possessive, selfish, insensitive, etc..

However, there are several aspects of her personality that differentiate her from her peers.

Katie is exceptionally brave. She is capable of acting in situations that would leave the average adult frozen in fear. Regardless of how scared she may be, Katie will always act when an innocent is in danger.

She is also strongly assertive, and has a clear idea of what’s right and wrong in the world. She will not allow anyone (siblings or not) to control her actions, and has resolved to never use her powers to kill a living being.

Outsmarted by a 6-year-old

Outside of her unusual understanding of the physical sciences, she’s bright enough to recognize that she is very cute. She uses this advantage constantly for things as simple as getting out of punishments from her parents, to getting other heroes to reveal their secret identities to her.

With the barest of efforts, she has endeared herself to New York City heroes including: Wolverine (James Howlett), Thor (Thor Odinson), Cloak (Tyrone Johnson) and Dagger (Tandy Bowen), and Spider-Man (Peter Parker). 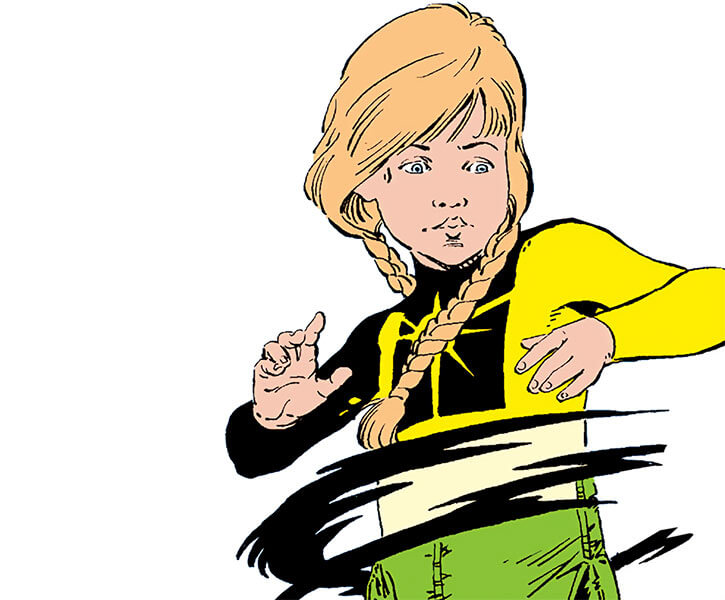 “I can disintegrate stuff ! WATCH ! Dagger, are you watching me ?”

“GET AWAY from my SISTER !”

“It’s MINE ! Give it back ! The tooth fairy gave me it when we were out in space ! It means I’m the most SPECIAL one …”

“See, Franklin ? See ? My Energizer power’s the best… I can disintegrate stuff and fire Power Balls…”

“Mister Spidey, is it true that all superheroes have to eat all their Brussels sprouts like my big sister Julie says ?”

“I… guess… when he gave us his powers and told us to save our world…. he meant this one too… even if it is full of crummy Snarks !” 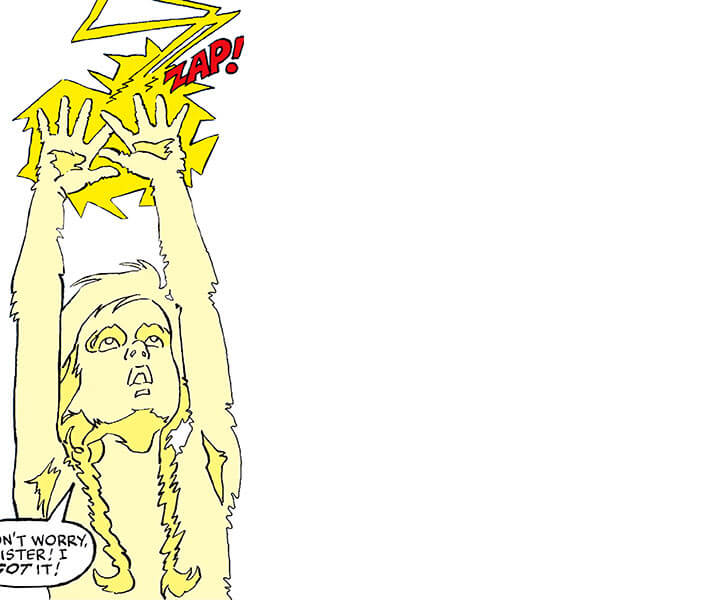 Katie and her siblings could be imported wholesale into the DC Universe where they would most likely be raised in Metropolis.

There they would end up encountering a myriad of superhuman beings, the foremost of whom would be Superman, of course. 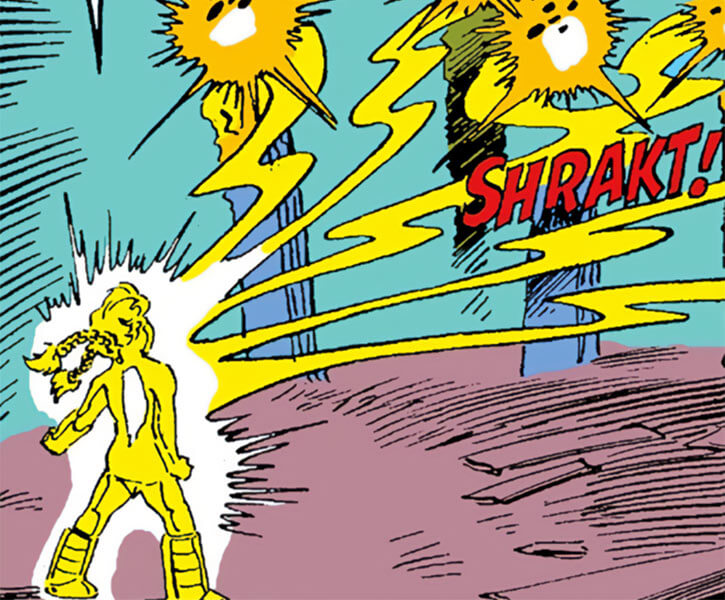 Katie gains the Attractive bonuses in Character Interactions with all persons who react favourably to a super-cute little kid. It doesn’t apply toward persons who dislike children, or otherwise do not go “awwww” toward adorable lil’ human kids (say, space aliens). 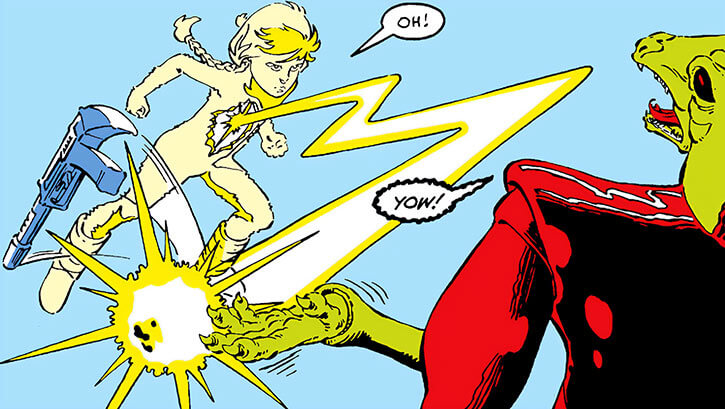