Niourk is a great novel for kids, written in a straightforward manner and with a gripping story in a strange world.

The first two volumes of the comic book adaptation were released in 2012-2013. Their author, Olivier Vatine, is known for the likes of the Aquablue comics  — or the Star Wars series Heir to the Empire  for Dark Horse.

The Black Child is an adept survivor, and could venture in arid lowlands, in mountains and along the shores. Though he has next to no education, he is remarkably intelligent – he understands the world in primitive terms, but his conclusions are eerily correct.

He knows how to count in multiples of five (expressed as handfuls of fingers), to navigate using cardinal points, and to use plants to heal common ailments. The Black Child is good with animals, and could even tame a brown bear.

For some reason he could also withstand normally fatal irradiation for months without ill effects.

After exploring part of Santiago de Cuba, he acquired a laser rifle. This weapon is remarkably robust, water-proofed and seems to have unlimited power and no need for maintenance. It can melt hard stone in seconds and kill large monsters in one or two hits.

The Black Child is capable of metabolising the compounds found in the brain of uplifted creatures — and *possibly* at traces level in the brain of most creatures on Earth since the catastrophes, though this is hypothetical.

As a result, his primitive belief that eating the brain of strong persons and animals confer their strength to him is obliquely correct. 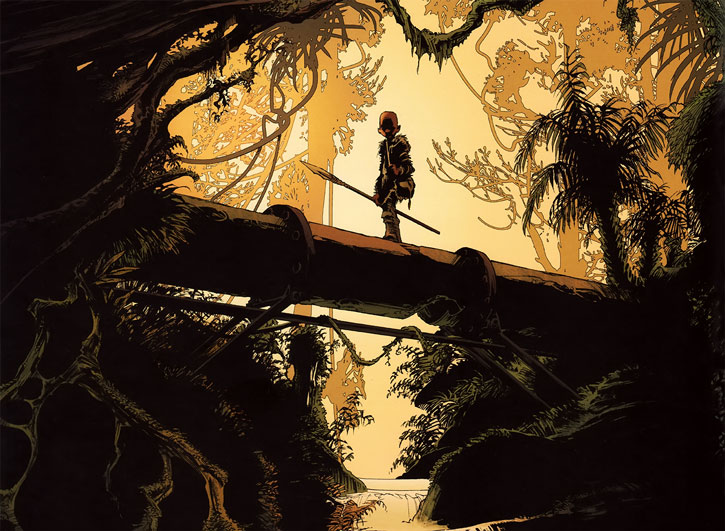 After he came into contact with the immense brain of an uplifted octopus, The Black Child starts developing a superhuman form of intelligence, that manifests itself in disorienting episodes after which his acumen and intuition are magnified. This frees him from his primitive view of the world and allows to learn rational, scientific analysis.

Since he can reconstitute entire areas of human knowledge from very little, this is not solely intelligence. Presumably he can “read” human knowledge that was encoded into the brain of the octopodes as part of the uplift  procedure.

The world of Niourk is the Earth in an unspecified, post-apocalyptic future. The world’s oceans have gone dry centuries ago, and those humans who still live on Earth have become primitive hunter-gatherers.

The action takes place in the lowlands of the Gulf of Mexico. Islands such as Cuba or Haiti are now tall, snow-covered mountains. The primitives consider these sacred, as the ruins that can still be found there are seen as the domain of undefined gods.

Before the fall, Earth had advanced technology, including spaceships, uplifting, and energy rifles. The general look and feel of the clothing, architecture, etc. found in the ruins is still very similar to the 2000s and 2010s, however.

The Black Child is an outcast of unknown origin, living on the outskirts of a sizable tribe of primitives. Whereas most people in the area look more Cuban, The Black Child looks markedly more Haitian – hence his monicker. Like most of the women and children, he doesn’t have an actual name. 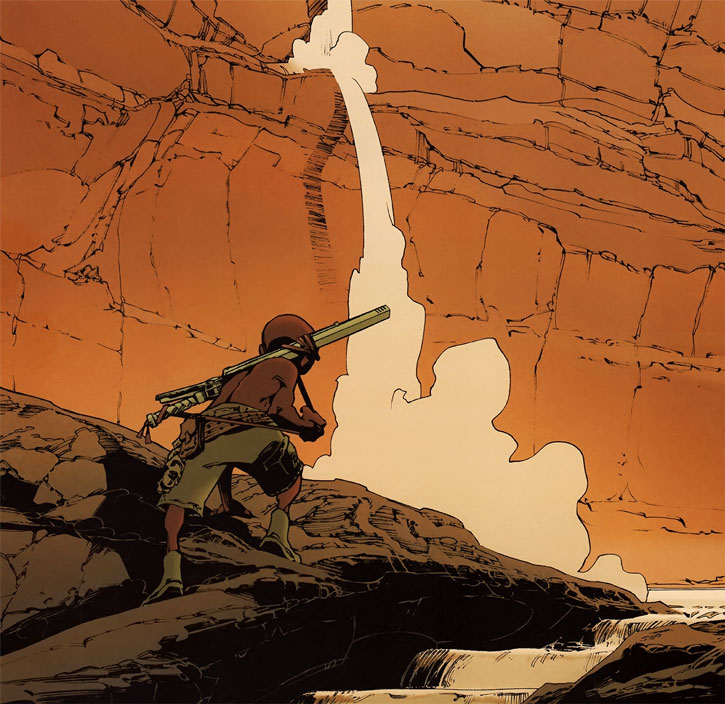 Since some things apparently never change, The Black Child is considered inferior and not allowed to fully join the tribe. The elder of the tribe, The Old Man, particularly reviles him. When the story starts, The Black Child seems to be about 13.

The Old Man owes his shaman-like position to one of his ancestors having dared climb the Cuba mountain range, reaching the ruins of Santiago de Cuba. The superstitious primitives assumed that in so doing he received advice and protection from the gods, making the explorer a spiritual leader.

By the time of The Black Child, The Old Man had become an alcoholic and would regularly trek to the land of the gods to bring back rum for his private stash.

Home of the Gods

One day, The Old Man did not come back. Disoriented, The Black Child decided to go find him. After sneaking into The Old Man’s hut to steal food, clothing and a spear, the boy travelled to the highlands of the Gods.

After exploring the ruins of a shopping mall, The Black Child realised that the drunken The Old Man had died of exposure.

As per the traditions of the tribe, The Black Child smashed open the skull of The Old Man to eat his brain, thus ritually acquiring his knowledge.

He then pried a vertebra out of the corpse and added it to the necklace of The Old Man, which already held the vertebra of various strong hunters and wise men that gave The Old Man great prestige.

Before leaving The Black Child took a shiny stick from the ruins. Though he initially selected it as a good club, a jaguar attack soon made him realise that it was a sort of laser rifle.

The fire and the migration

While The Black Child was returning from Cuba, a wildfire raged through the savannah and razed the village. The tribals fled in time, but there was now too little food to be found on their traditional hunting grounds.

With The Old Man gone Thôz, the chief hunter, was now tribal leader. The brave Thôz had the tribe move across the nearest col to reach new land. Though these lands were known to be haunted by monsters, it was either that or starve. 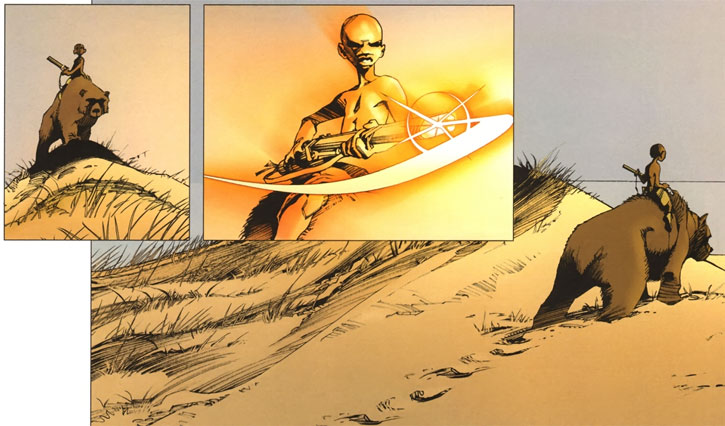 The monsters in question were gigantic, radioactive, heavily mutated octopuses. This species had been uplifted to serve as underwater slaves before the great disasters. Specifically, the octopuses used to store radioactive waste in bunkers under the ocean floor.

The tribe soon ran into one of those and might all have been killed, but Thôz’s lucid orders and decisive spear charge allowed the tribe to kill and eat it.

Meanwhile, The Black Child was tracking the tribe through the wilderness to tell them that he was now The Old Man. He also enjoyed using his rifle to kill attacking predators, and ate their brain to acquire their strength.

At one point he was attacked by a brown bear, and shot him in the front paws. Remorseful, The Black Child set up camp near the immobilised bear and gave it food and water, eventually taming the beast and healing its paws using plants.

When The Black Child left, the bear followed and soon served as a mount. As it turned out, it could also smell the octopodal monsters in time to hide.

The monsters and death

Meanwhile, the monsters counter-attacked, and overwhelmed the tribe. Those tribals who weren’t killed were made prisoners, but The Black Child came in and killed several monsters.

The Black Child imposed his authority as he was now The Old Man, but he had come too late. The tribals were all fatally poisoned by the radioactive flesh of the first monster that had eaten.

Not knowing that yet, The Black Child attempted to consume the brain of a monster to acquire its strength. Something within the brain extended out and hit The Black Child in the forehead, establishing a sort of telepathic contact that seemed to consist of species-wide memories going back all the way to the time when the octopodes were uplifted.

After this contact, The Black Child experienced regular dizzy spells that would leave him with increased intelligence and rationality.

As the tribe died off, The Black Child encountered “a god”. A small mission had been launched from space to reconnoitre Earth and see what it had become, and “the god” was one of the human scouts.

Amused by the primitives, the scout told The Black Child he should go to New York City and hunt in the ruins, though The Black Child could only pronounce the city’s name as “Niourk”.

Exploring Niourk led to quite a few surprises.

See illustrations for Vatine’s view of The Black Child.

The tribals speak something that still resembles English, and some of the names seem to be mangled Spanish and English (“Thôz” might be mangled version of “Santos”, and his companion – one of the very few women the tribals deigned giving a name to – was named El-Za.)

During his return from the realm of the Gods, The Black Child greatly enjoys the sense of freedom and power that his rifle give him – not to mention the abundant food.

However, though he is a pariah, he feels a sense of kinship with the tribe. He also feels responsible for being The Old Man and a friend of the Gods. 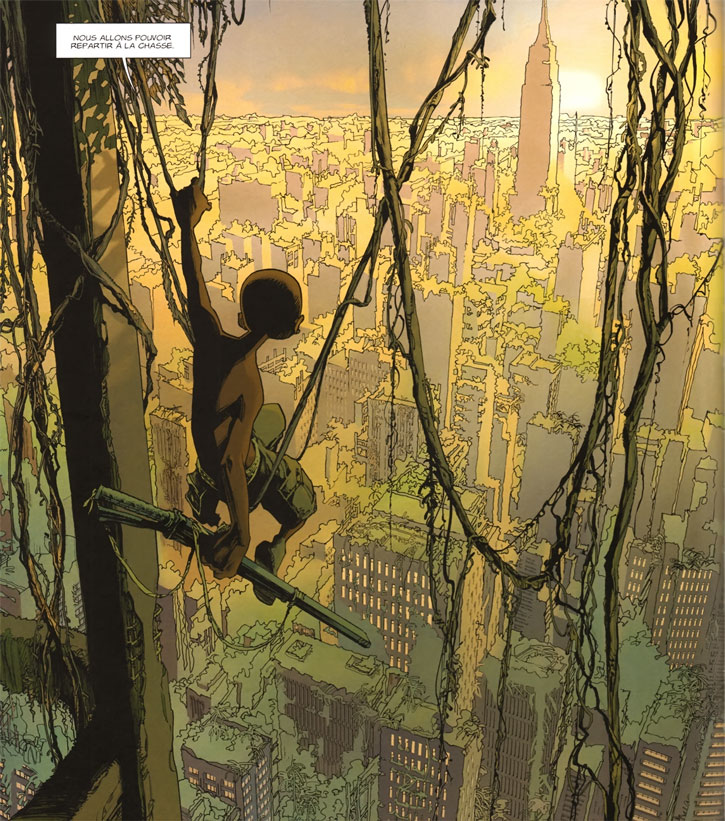 Early on The Black Child is but a primitive, uneducated, superstitious little boy. He knows very little about life, uses magic thinking, treats charismatic fauna as if it understood what he says and shared his culture, etc.

Generally, he lives in a very simplified version of a world full of animist mysteries and dangers.

After his contact with a monster’s brain, The Black Child would sometimes feel woozy than experience a sudden jump in his understanding of the world.

For instance, while standing before the Statue of Liberty he had one such spell – and went from seeing a gigantic stonelike goddess to understanding the concepts of statues and sculpting.

(Finding a rifle among the ruins, but not yet knowing what it is) “The shining stick is stout. It will be a good mace for The Black Child.”

(Inspecting tracks) “The tribe was here. And that was fewer mornings ago than there are fingers on a hand.”

(To a wounded bear) “The Black Child could finish off the bear, but he is healing it. Despite the bear having tried to kill him. What would the bear do without The Black Child ? With its burned paws, the bear cannot hunt or drink. The bear did not know that The Black Child is friends to the Gods. The Child ate the brain of The Old Man.”

Source of Character: Niourk by Stefan Wul – or rather the comic book adaptation by Olivier Vatine since my 1981 Folio Junior edition of the novel was donated to a public library a loooong time ago. Even though I loved my late 70s/early 80s Folio Junior novels.

Writeup completed on the 4th of February, 2015. 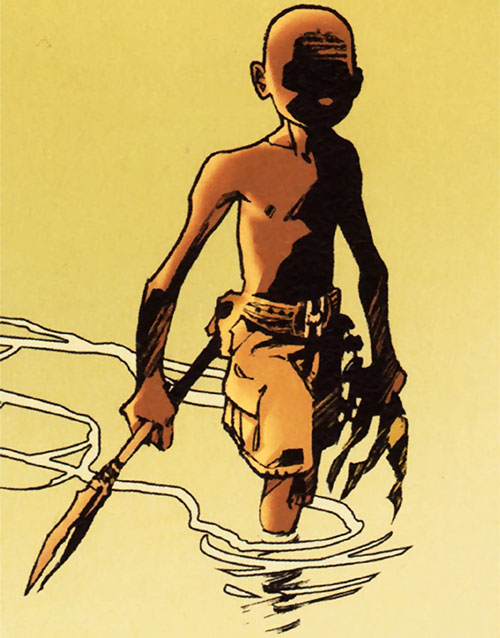