Halcyon is a deconstructionist 2010 Image Comics super-hero series. It is set in an original war where crime and violent conflict all but vanish within months, making heroes largely pointless.

Enos was once a chimpanzee who was cybernetically enhanced in order to study the effects of space-flight in zero to low gravity environments.

Upon return to Earth, Enos continued to be genetically enhanced, transforming into a super-intelligent gorilla.

In the final battle, Enos displays an animal like rage while fighting Sabre, reverting to standing on all fours instead of upright, and baring his teeth.

Enos is described as the first cybernetically enhanced space chimp. In 1962 Enos was the first chimpanzee launched into Earth orbit.

While it was reported that he died on November 4, 1962, the truth is further genetic alterations were made to him.

Enos joins the Halcyon team meeting via hologram when Zenith calls the team together after being alerted to the anti-violence trend affecting the Earth’s population. He notes that his research indicates this was not a sudden event, but one that has been growing exponentially.

While teammates Null and Triumph attempt to explain to Enos that with no more violent crime being committed, they no longer have a purpose; Enos counters that their mission, to make the world a better place, is finally fulfilled, and that it doesn’t matter how it was accomplished, or by whom.

Later, in Washington, D.C. at Heroes Plaza, Enos, along with Triumph, Null and several other unnamed superheroes, announce that Enos’ research confirms that the past 30 days has seen a miracle. All man-made aggression have ceased all over the world.

He declares that without evidence to the contrary, this is a natural occurrence, despite the high improbability of that occurring. He announces that the mission of superheroes, the never-ending battle for Truth and Justice, has ended, and that he and the other heroes with him announce their retirement.

Enos is later invited to Frontier Concepts HQ, one of 28 legitimate organizations attempting to discover the cause of the ’Global Humanitarian Phenomena‘ called “Project Utopia?” (the question mark being deliberate).

They called Enos because their findings are…strange. They are plagued by setbacks. Procrastination at first, then if the researches pressed on, physical symptoms occurred such as migraines and nosebleeds.

During the autopsy of teammate Triumph, Enos notes the G.H.P. doesn’t prevent violence to one’s self, and notes that whatever the G.H.P. is, it seems to prevent anyone from wanting to find out what is causing it.

After Sabre and Zenith investigate some leads as to what is causing the G.H.P., Sabre vows to put an end to it. Zenith returns to Halcyon Underwater HQ and calls a meeting. They realize that if Sabre discovers the source of the G.H.P., and it is a mechanical one, that he might be able to destroy it.

Enos gathers with the heroes (and some villains) to defend Oculus’ lair, where the mechanism that is causing the ’GHP‘ is stored. Enos and Transom enter and stand guard at the mechanism itself, while Zenith and the others stay outside to defend the perimeter.

Sabre arrives, however he has not come alone and has gathered heroes and villains together who want to see the mechanism destroyed and return the world to its ’natural‘ state.

Both groups discover that close proximity to the machine negates the ’GHP‘ and they are able to fight once more. Sabre sneaks past the outside defenders and finds Enos and Transom waiting for him. Sabre finds himself in front of one of Oculus’ many armories which opens for him.

He dons one of Oculus’s suits of powered armor, and dispatches a group of defenders before returning to Enos and the device.

Enos has become enraged, Sabre mentions having always wondered what it would take to bring out Enos’s animal side, to which Enos responds “Yes, your attempted destruction of the world…” The two struggle and crash through a large window, falling many stories. Sabre, thanks to the armor, survives.

Enos’s last words are “Don’t do it. Let the world be…”

Enos is an almost 7 foot tall hairless gorilla that stands erect as a human.

He has several connection ports that protrude from his head that presumably allow computer access to his brain from when he was still an experimental space chimp.

Enos is calm and rational, to the point of having almost no empathy for others, or himself. He sees everything as something to be studied and learned from, in order to advance knowledge.

While he acts as a superhero, it is not to uphold some idealistic crusade or cause, but rather ’to make the world a better place.‘ If that means allowing the villain’s plan to succeed, he sees no morality in it. Only the outcome matters.

“Why do what we do ? Why are we heroes ? I mean after you strip away the adrenaline rushes and feelings of inadequacy we’re driven by… To make the world a better place. That’s our never-ending mission, isn’t it ?”

“Natural or not, it’s left the world’s so-called ’costumed adventurers’ — its ’Super-Heroes’, if you will — it’s left almost all of them without a purpose. To put it another way… our never-ending battle for Truth and Justice has, it would appear, finally found an end. And that is why the heroes standing here today have decided to join me… in retiring.”

Sabre: “I always wondered what it would take to bring out your animal side…”
Enos: “Yes, your attempted destruction of the world…”

Drawbacks:
Distinct Appearance, Exile (from the chimpanzee family he originally comes from), MIA to a daily cocktail of gene therapy and pharmaceuticals that include some minor anti-depressants, Public Identity, Rage (Minor).

In the character design notes from Mark Guggenheim to Ryan Bose in the back of the Halcyon TP, Mark notes that this character is based on the first chimpanzee shot into space, Enos .

They also decided that they wanted a character like X-Men’s Beast, or Spider-Man in agility, although he doesn’t display these abilities during the story. Ryan ended up drawing a hairless gorilla that stood up-right.

So I started with a basic gorilla from the animals section, and increased his stats based on the design notes.

In the story, Enos says “Part of my daily cocktail of gene therapy and pharmaceuticals includes minor antidepressants.” This perhaps accounts for why he is a nearly 7 foot tall hairless gorilla, instead of a chimpanzee.

Again, from the dialogue, it would appear that Enos is very intelligent. Perhaps super-intelligent. So I have him Split to account for his ability to run multiple experiments simultaneously. 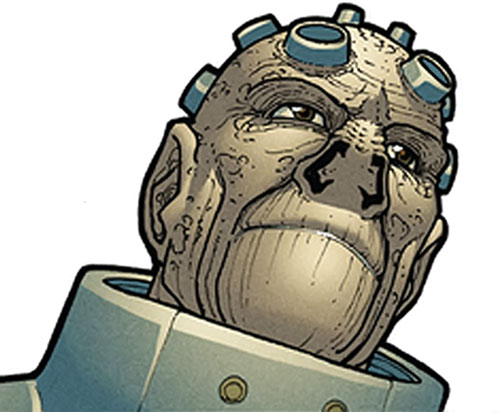