“In the first years of the 21st Century, a third world war broke out. Those of us who survived knew Mankind could never survive a fourth. That our own volatile natures could simply no longer be risked.
So we have created a new arm of the law – the Grammaton Cleric, whose sole task is to seek out and eradicate the true source of Man’s inhumanity to Man… its ability to feel”.

The Grammaton Clerics are an elite law-enforcement division with lots of responsibility and authority. They are all trained in the law (i.e. obedience to Father), unarmed combat, as well as the infamous Gun Katas.

They usually are sent to field missions in pairs to exterminate people with emotions, whenever the highest authority, Father, issues an order of sense offence.

The Clerics always outrank other law-enforcement officers, and are expected even to take on their partners if need be. Clerics are also expected to destroy any objects of art or else that could risk provoking feelings on sight.

Regular lesser storm troopers, clad in black long coats, black motorcycle helmets and equipped with an automatic rifle, do most of the law-enforcement work. The Clerics are only called upon if a big enough situation surfaces demanding their attention and skills.

Citizens were taught to turn in anyone who was caught having feelings. The Government is set up like a religion, but instead of a God over it they have placed a man, a Hitler-like figure who is called “Father”.

Father is long since dead, but another Council member, Dupont, has secretly taken over his role in the holographic guise of the Father himself. Everyone is to follow his “will” without disobedience. To have disobedience is to have feeling. And that means death.

Through analysis of hundreds of thousands of recorded gunfights the Clerics have determined that the geometric distribution of antagonists in many a gun battle is a statistically predictable element. The Gun Kata utilizes the gun in an optimal way.

Each position represents a maximum kill zone, inflicting maximum damage on a maximum number of opponents, while keeping the defender away from the statistical trajectories of return fire. By mastery of this art, the firing efficiency will rise by no less than 120 %.

The difference, an increase in the lethal efficiency of 63 % makes the master of the gun katas an adversary not to be taken lightly.

John Preston is the number one man of the Tetragrammaton Clerics law-enforcement division. He enjoys the status of a Tetragrammaton Cleric 1st Class, which is the highest possible level for a Cleric. As such, his physical skills, including acrobatics and the martial arts, and particularly the arts of the Gun Kata, are superb.

He is easily able to take on several well-trained men in gun combat, emerging victorious in a couple of seconds, either by use of melee or ranged attacks. In fact, his accuracy and speed is unsurpassed, even in complete darkness, so that he can hit targets on all sides of him, and even behind him.

His exceptional calmness and discipline are most useful in combat situations. When starting a Gun Kata he enters a near trance-like state of calmness that fools even a polygraph detector.

He’s also rather intelligent, deductive and plans ahead in time. His main weakness is the lack of social skills, although as a Cleric he doesn’t need to do much talking.

Preston is also very intuitive and capable of sensing other people’s emotions. This unusual ability and his aptitude for the Cleric work from a very early age has branded him a status as a prodigal Cleric.

In the years following World War III, which devastated the world, mankind has decided to eradicate all of the emotions that lead to the conflict. The answer comes in the form of Prozium, a serum that is injected into the bloodstream and instantaneously numbs the user from all feelings, hopes, and dreams normally associated with being human.

This new order of humanity is splintered, with a group of outsiders retreating to the fringes of the major cities and enjoying forbidden items such as paintings, music, and color.

An order called the Grammaton Clerics is the new law. They practice a martial art known as ‘Gun-Kata’ to keep the peace. Their number one agent is Cleric John Preston.

Even though Preston witnessed his own wife’s execution for ‘sense crimes’ years before, he has never allowed the loss to affect him. Instead, he has used the time since then to become the most feared and respected Cleric in the land.

But when a passionate young woman is taken in for execution the very same day Cleric Preston accidentally misses a dose of Prozium, the combination opens Preston’s eyes to the madness of the new world, and he sets out to make changes.

John Preston is a clean-shaved, slender and muscular male with slick, back-combed hair, black eyebrows, a straight nose and sharp features. His Grammaton Cleric suit is all black and rather tight-fitting.

On occasion, he wears a white ceremonial version of the Cleric suit, complete with a white sash and a sword.

Due to the effect of life-long use of the emotion-calming drug Prozium, Preston, like most contemporaries had very little personality to speak of. Using Prozium, he was very formal, straight to the point and never showed any type of emotion.

In many regards, he behaved much like a fascist war machine, although a calm and methodical one. In his actions, although not in his words, he also demanded a certain degree of respect from colleagues and the general public.

Preston’s ability to sense emotions was a tremendous asset in his line of work, but he never really understood the meaning of the emotions that he sensed. Curiously, he ignored the feelings that he sensed from his family members completely.

As he quit taking Prozium, his feelings began to surface rather quickly. Preston was taken completely by surprise and found himself both confused and horrified by these feelings. A beautiful view or hearing classic music could bring him to cry.

Sensations of guilt manifested themselves almost immediately as well. These were spurred by his passivity when his wife was killed, and by having killed so many human beings just for having emotions. These feelings of guilt would later provide him with the resolve for a new purpose ; to give people back its emotional freedom.

Still, while suffering from nearly uncontrollable emotions, he maintained a steel-hard resolve and discipline. His training as a master of the Gun Katas and his previous hard physical regiment, gave him the mental edge he needed to control his life and emotion satisfactorily.

He learned to master his feelings in a very short time (in days only), while his personality would still remain that of the professional machine-like stiff that he had always been.

Once his mind was set into motion, he could kill evil people, as he had always done, feeling no regrets about that. Still, he wouldn’t kill any innocents and even protected abandoned puppies if possible.

In the end, he learnt that without control emotion is chaos. He taught himself to control his emotions, so that he could work just as effectively as before, but this time for the emotional freedom of the people. Preston is likely to experiment further with new emotions and will probably, in time, develop more of a human personality.

Preston: “The only thing that disturbs me, Sir, is that I’m Father’s instrument against the Underground and I’ve never had the honor of meeting him.”
Dupont: “Hmm, yes, but Cleric, you know that Father never grants an audience to anyone.”
Preston: “Even to the man who brings him the resistance?” (bluffing his way to a meeting)

O’Brien: “You can’t do this !”
Preston: “Tetragrammaton. There is nothing we can’t do.”

He would fit right in the future world of the Terminators, in a scenario in which the human rebels have adopted machine-like behavior and efficiency to better combat Skynet.

Or the Tetragrammaton Cleric order could be part of the recovery after the Great Disaster. Preston could also have been one of the warriors grabbed by Borsten’s time platform to fight in Borsten’s arena.

He would almost certainly have become top arena champion – and having Preston’s machine-like accuracy and discipline clash against Hex’s sheer experience and badass-iness would have been the fight of the century. Oh, yeah !

A completely different take in the modern era ; Deadshot is borderline insane. Although he did overcome his suicidal urges by the end of Suicide Squad, he could easily have a relapse and encounter further mental degradation.

Mood-stabilizing treatment could easily turn him into an emotional zombie, freeing his mind to devise the gun kata – if somebody in the DCU can invent that, it’s him.

Thus Deadshot, as Grammaton Cleric Lawton, becomes the head of a small cult of gun kata-trained enforcers working for Hugo Strange, who’s of course behind this mad experiment and has already taken over a small mining company town in Canada, policed by the Clerics.

In that case, Preston is Deadshot, his best minion or a future artist of the Gun Kata.

Bonuses and Limitations:
Iron Will only activates when Preston uses his combat Skills – but does so automatically (-1).

In game terms, the Gun Katas are a combination of Evasion, Martial Arts and Weaponry (Firearms). A master is also likely to have Weaponry (Melee) and possibly also Shtick (Paired Firearms) and/or Shtick (Quick Draw) as well as a high DEX score.

The sole task of this corporation is to produce and distribute the emotion-calming drug Prozium [Prozium [BODY 01, Broadcast Empath: 07, Innocent, Ammo: 01, Limitations: Prozium is a drug, and once taken, Broadcast Empath is Always On (-1) and only works to suppress all stronger emotions (-1; this effectively neutralizes the user’s responses on a polygraph test), The Innocent Drawback is active on the user and makes him/her more susceptible towards brainwashing (Persuasion), Duration 14 APs per dose]].

The factories are all around the city. It is a citizen’s duty to report any lost Prozium and get a replacement at the Equilibrium. Failure to do so likely results in a sense offence, and thus processing (i.e. extermination). 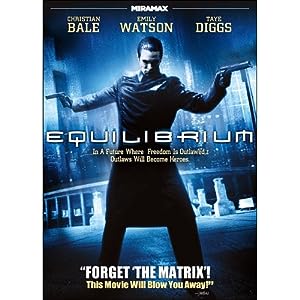 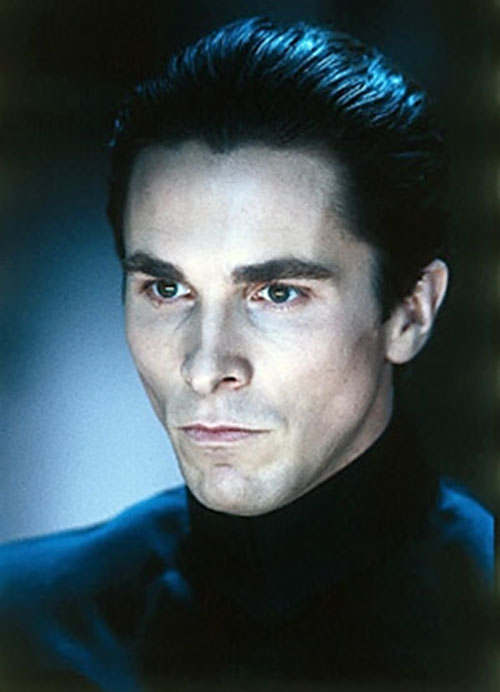 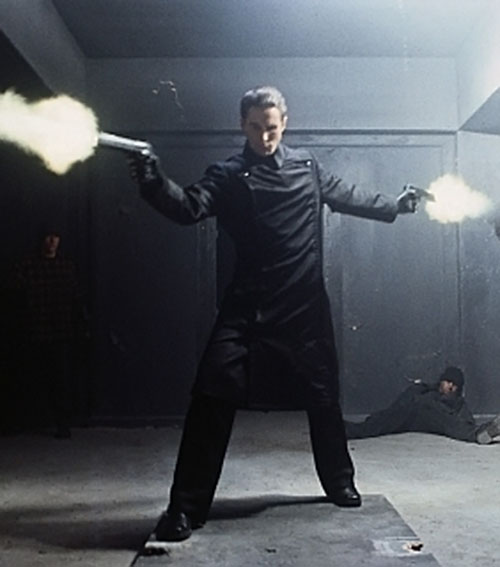 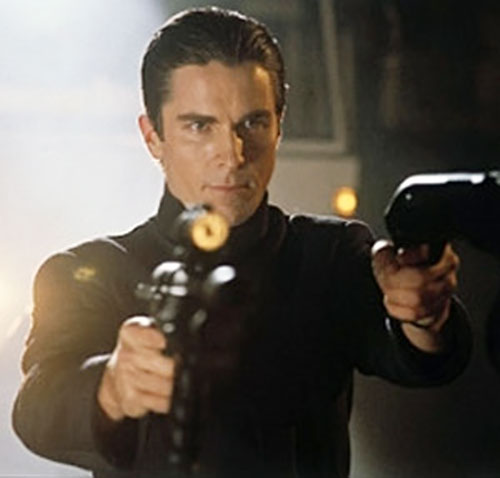