You might remember Equinox if… if you were reading Marvel Team-Up (or a reprint) during the 1970s. Which is fairly niche. Though he has since returned in newer stories.

Back during the seventies I thought that Equinox had a cool name and was impressive. But, in the words of Dr. Liara T’Soni, “I was… very young”.

This phenomenon moves down from his head to his feet, doing a full vertical sweep every 6-7 seconds.

The flaming parts can shoot flames and the icy parts can shoot cold. This too is comparable to the Human Torch (Johnny Storm) and the Iceman (Robert Drake). However, Equinox isn’t as accomplished with his powers as they are.

Early on he seemed to be about “Class 2”. But more recent sourcebooks have him pegged at “Class 20”.

According to Equinox, this increase is because he was now accepting his powers rather than fighting them. Allegedly, every thermodynamic ripple cycle is making him stronger.

In his earliest appearances he wore a metallic, anonymising containment suit. Its non-slick surface defeated the webbing of Spider-Man (Peter Parker). Or at least the formula Parker was using back in 1974.

He’s also fast and agile. He could leap atop a moving car, then atop a nearby moving bus. 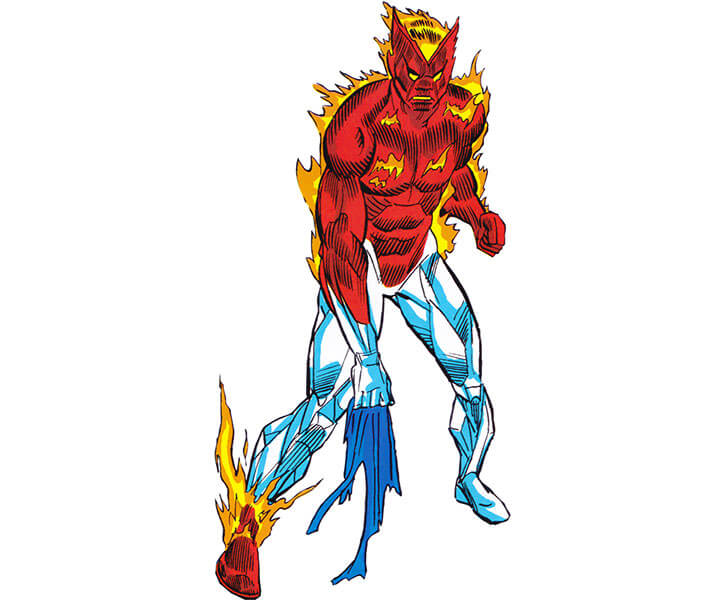 Equinox was first glimpsed in 1974. But his appearance was an enigmatic one. He was clad from head to toes in a featureless costume, and stealing scientific research hardware.

Spider-Man (Peter Parker) once failed to stop him, as did the Torch (Johnny Storm).

Equinox’s use of ice powers led to Storm accusing the mutant Iceman (Robert Drake) of being the thief. But after this misunderstanding, the two lads ended up fighting Equinox. They discovered his powers after Mr. Storm damaged the containment suit.

Equinox vanished in an accidental explosion, and wasn’t seen again for a few years. Which is when we learned about his background.

The H-index always was a mistake

Terry Sorenson is the son of two scientists.

Dr. Margay Sorenson is the head of Natural Sciences at Bard  . She seems to be a biochemist.

Her husband David was a physicist.

However, unlike Margay’s, David Sorenson’s work was poorly received by his peers. He gradually sank into bitterness, alcoholism and domestic violence. Margay left as soon as Terrance was old enough. 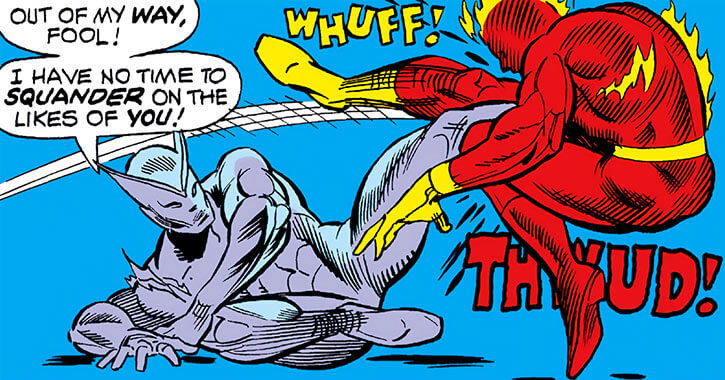 With the containment suit on.

Terrance went in to get David out of the blaze, but the equipment exploded. David was killed and Terrance was heavily mutated.

Margay worked for years to reconstruct David’s work and cure Terry. But none of the attempts worked.

Terrance started stealing valuables in Manhattan to fund this research, as Margay’s savings were running out. Which is what had led to the 1974 clash.

A Sorenson of fire and ice

By 1977, Terry Sorenson was losing it. He ambushed and nearly killed Spider-Man as revenge, then went on a rampage.

Spidey, plus Yellowjacket (Dr. Henry Pym) and the winsomeAttractive in a fresh and youthful way Wasp (Janet van Dyne) tried to stop him. But they were outgunned.

Ms. Sorenson tried to intervene, but Equinox’s power was now too strong for her power control beam.

As he clashed with a NYPD unit led by Jean DeWolff, Equinox accidentally destroyed electrical equipment. This plunged a large chunk of New York City into darkness.

Parker and Dr. Sorenson used Reed Richards’ lab (the FF were away) to build stronger depowering equipment. Equinox invaded the Baxter Building, but with van Dyne and Pym’s help he was neutralised.

Over decades, it was possible to treat Terrance Sorenson to bring his powers under control. He thus regained his rational mind.

He eventually married, and the couple had a daughter.

By 1994, Mr. Sorenson was in a bad situation. His wife had died some years before, and he couldn’t find a job.

As the Falcon, Sam discovered the truth. Janet had inherited Equinox’s powers, but couldn’t control them. Terrance had no idea what to do. He was threatening his daughter to stop her from emitting uncontrolled bursts of fire.

As the Falcon and as Wilson, Sam obtained help for the both of them.

Mr. Sorenson was later seen in Villains Anonymous meetings. This is a support group for former costumed and/or superhuman criminals. Presumably, this was where Mr. Wilson directed him.

Equinox was also seen running power tests for Project: PEGASUS. Presumably, PEGASUS researchers were the ones whom the Falcon had contacted to help Janet. 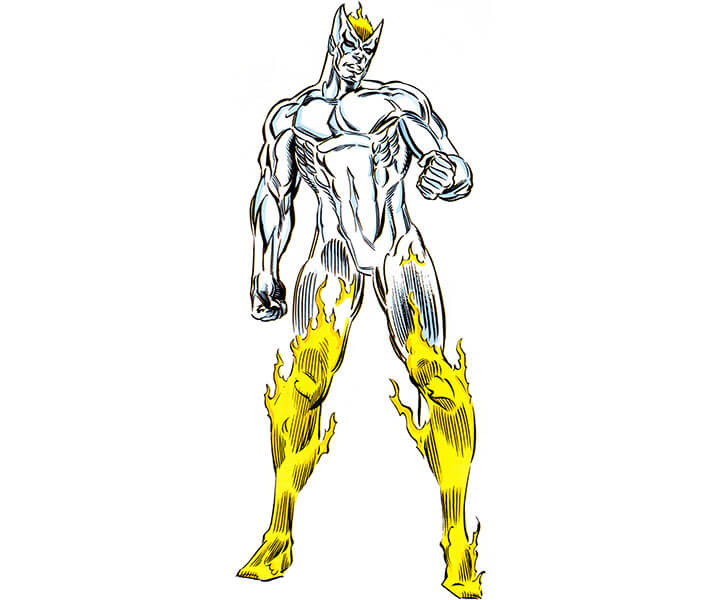 In 2006, Equinox was trying to escape from the Superhuman Registration Act by getting a fake ID.

During the Initiative project, Equinox seemed to have joined the Montana response team, the Freedom Force (no — well, not much — relation).

He was under the command of the Challenger and working with Cloud 9, Think Tank and Spinner.

However, this Equinox was — during at least part of the Initiative project — a Skrull impostor. 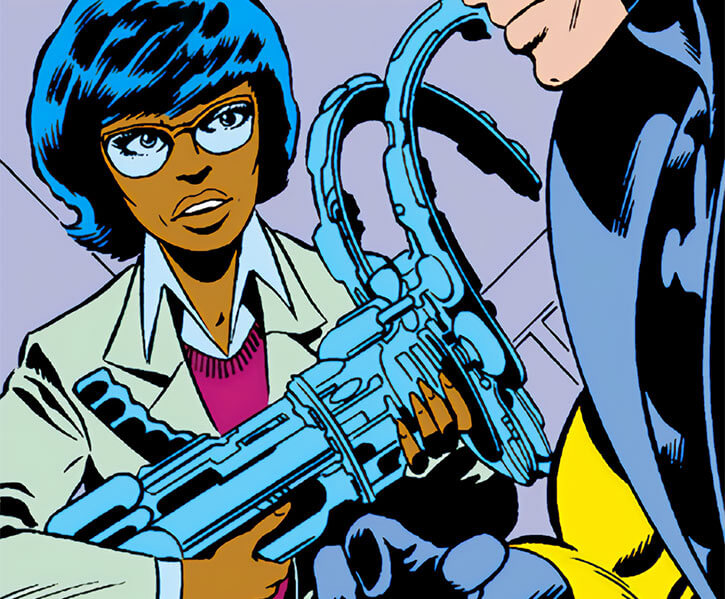 In 2012, Equinox was seen torching a building and attacking the NYPD to keep them at bay. He may have been hired for criminal arson.

Sorenson was transferred to the Raft, then to the Tabula Rasa prison.

However, a major riot soon took place there. Rogue (Anna-Marie NLN) responded. She asked prisoners to volunteer their powers to help her fight the mutineers.

Equinox immediately volunteered. He hoped to be rewarded with time served – and thus be reunited sooner with his daughter.

In 2016, Equinox became a henchman for a chronal splinter of Kang the Conqueror – possibly against his will.

Kang multiplied him into an army by bringing back to the present versions of Equinox from the very near future.

However, Spider-Man (Miles Morales) of the Avengers deduced which version of Equinox was from the present. He knocked Sorenson out, making all future copies blink out of existence.

During his 1970s rampages, Equinox was drunk on power. He could feel enormous might swelling within him, and murderously exulted in his ability to destroy and vanquish.

When less excited Mr. Sorenson seemed to mean well – but to have serious trouble sticking to that agenda.

In 1977, Dr. Henry Pym noticed that Equinox kept alternating between an adult vocal tone and a teenage one. This likely hinted at Equinox combining the consciousnesses of David and Terrance in some fashion. There’s no further data. 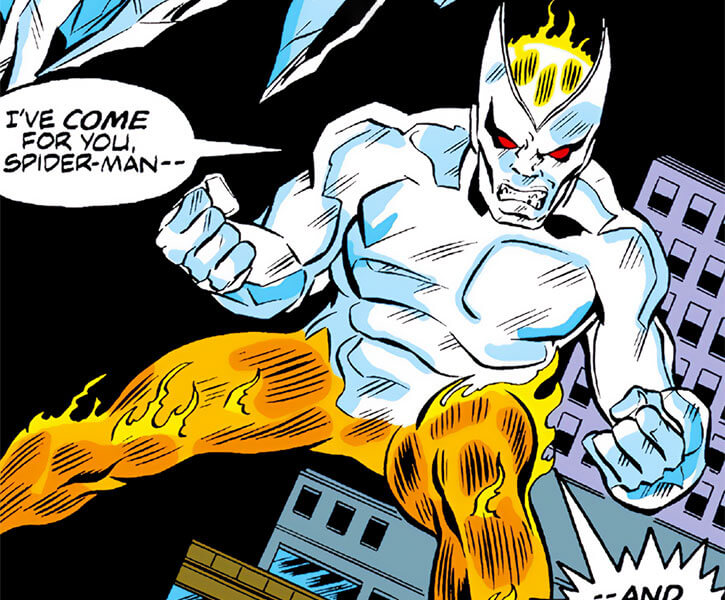 Minor Rage, Strange Appearance, Misc.: if hit by an energy attack that scores a double, Equinox uncontrollably releases Bomb: 09. This doesn’t attack him, but it consumes one Automatic Action. If he’s out of Actions for that Phase, the explosion takes place as his first Action during the next Phase after a short buildup.

CONTAINMENT SUIT [BODY 02, Grappling Immunity: 06]. The suit *might* dampens Equinox’s Powers, but if so it wasn’t observable.

The 1974 stats are seen but briefly. So most is speculative.

But I figured they’d be useful if somebody somewhere needed stats for a less powerful Equinox. No need to thank me, just send cash and 12-gauge shotshells. 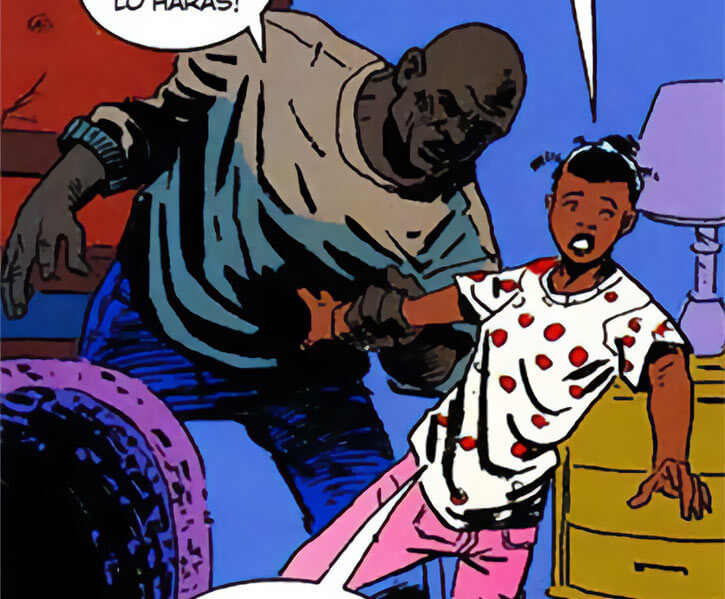 Terrance and Janet (from a hispanophone edition).

Once the treatments work, Sorenson acquires an Alter-Ego (human form) and Dependants (his family).

He can still turn into his Equinox form. But he doesn’t get his full power right away – it rises through heat/cold cycles and exertion.

There’s a remark in 2016 about Equinox being more powerful than he should have been. It wasn’t that apparent in the material, so I suspect that somebody was still making assessments based on 1974 data. 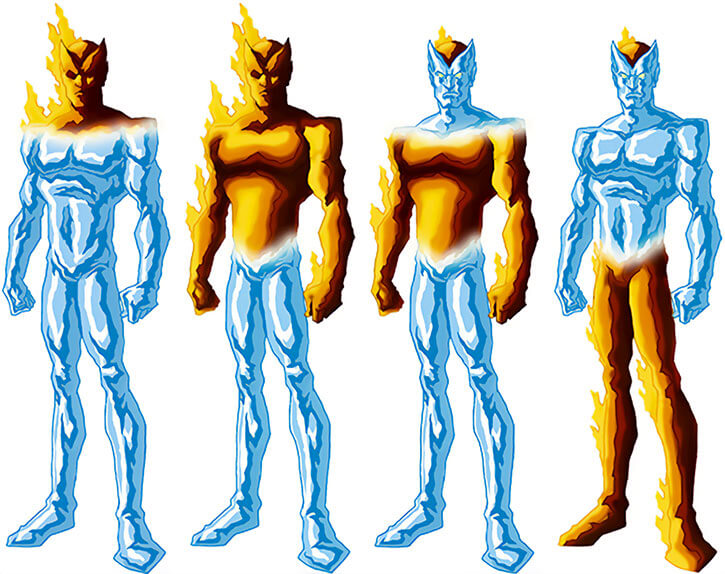