For more context, you can check the Peter Cannon… Thunderbolt! character profile, plus our article that talks about the publishers bought by DC Comics.

Eric Gore is an insane scientific genius. He specialises in experimental medical procedures and biology.

His grafted ape paw contributes in some very way to his insanity and his genius both. It also seems to enhance his vitality. He is regarded with awe by the preternaturally intelligent apes of Gore Island.

Gore’s most dangerous invention was a germ capable of devouring a large animal within seconds and only leave the bones. Thankfully he never had a chance to deploy it outside of tests.

Eric Gore was a medical specialist, developing new grafting techniques. One night, a terrible explosion in his lab destroyed his right hand and left him partially blind.

Desperate, disoriented and deranged, Gore was contemplating how his life was ruined. This is when he saw the paw of a nearby test ape, which was dying from the explosion. Feverishly, Gore operated here and there on himself, somehow grafting the paw in place of his hand.

The graft brought even weirder complications. New sensations coursed through his veins and eventually consumed his brain. His paw gave Gore a bestial lust for power and a desire to subjugate the whole of humanity.

Gore left, looking for a quiet place to conduct new and deadly research. Eventually he stumbled upon an uncharted island near the US coastline.

This island was inhabited by weirdly intelligent apes (probably chimpanzees). These seemed to partially understand humans, communicated among themselves, and followed elaborate social rituals. The chimps were in awe of the man with an ape paw, and treated him like a god.

Arranging for scientific equipment to be smuggled by an unscrupulous ship captain and enlisting the apes for labour, Gore built a large lab and living space. Over the following months he perfected a deadly bacteriological weapon with which he intended to conquer mankind.

He even tricked a trio of scientists into getting smuggled on the island under pretences of a secret governmental project. But they refused to cooperate once they realised they had been manipulated, and Gore had the apes imprison them.

Thankfully, Peter Cannon was then caught in a storm and washed ashore the island. He soon met Gore but escaped into the jungle. Evading the apes, Cannon changed into his Thunderbolt costume and doubled back. Meanwhile, Gore had his apes judge the captive scientists – but their judicial system was trial by combat.

Seeing that the scientists did not stand a chance against their ape opponents, Thunderbolt took the challenge in their stead. He thus faced five furious, crazed chimps in melee. He won. The rest of the apes then refused to obey Gore when he ordered them to kill Thunderbolt, since that was contrary to their customs.

Deprived of his allies, Gore ran to his lab. Therein he grabbed one of his experimental weapons, the Shock Gun. Thunderbolt nevertheless knocked Gore out before succumbing to the powerful weapon’s effects.

Gon-Da, who was previously Gore’s main chimp servant, got into the lab as it was catching fire. He dragged Thunderbolt out before it exploded. Gore seemingly perished in the explosion.

Gore is your typical treacherous, mad, megalomaniacal, monocle-wearing, murderous rogue scientist with an ape’s paw for a hand.

He’s very evil, but stays quite calm and civil when dealing with somebody he deems intelligent enough to understand his life and his plans. And he would have succeeded too, if not for this meddling kid !

Equipment:
Shock Pistol [BODY 03, Mental blast: 10, Ammo: 05, Bonus: Mental Blast has the Scattershot Advantage, Mental Blast is its own AV (+1 or +0 depending on house rules). The effect from the Shock Gun is more akin to a shock field than a blast, and is almost impossible to dodge]. 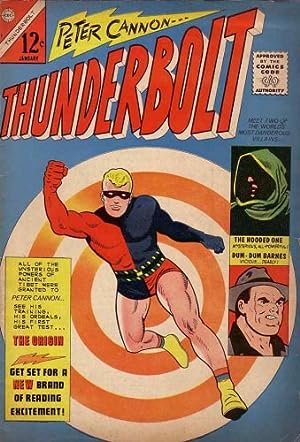