The women of Venus are apparently physically and intellectually superior to mere Earthlings. However, it is impossible to say by which margin.

Our game stats assume that they naturally operate at the level of the best-trained Earth soldiers and engineers, as per some period narrative conventions. They also appear to have somewhat enhanced strength, constitution and agility. It would seem that a team of four Venus women soldiers could defeat a bus full of fit Earth men chiefly using hand-to-hand combat.

Erica herself seemed to be a competent field agent and handgunner. She was familiar with (though dismissive of) Earth cultures and lifestyles, having long studied the planet via telephoto screens.

She and her operatives wielded pistols shooting a potent paralysis ray.

Erica hails from Venus. There, under thick clouds, lives in Earth-like conditions a society of people who seem to be Humans. Yet they are physically and intellectually superior, and enjoy a seemingly harmonious and sophisticated social organisation.

Venusian society is completely dominated by women. Their males gradually degenerated physically and intellectually until they became completely useless. Perhaps that was because they weren’t allowed to have an active role in society. The males eventually started dying off, lacking the acumen to even sustain themselves.

Venusians were well-aware of Earth. One pastime of theirs was to observe Earth people in real time using “telephoto” interplanetary video surveillance, which can even see through walls. The Venusians generally thought that Earth folks were stupid and ridiculous, if entertaining.

However, with the Venusian males dying, the Queen decided to kidnap men from Earth. This was chiefly to prevent extinction. But another consideration was that, while inferior, Earth men were still way stronger and smarter than Venus men. They would thus be far more enjoyable lovers.

In 1947, the Queen of Venus had her agent Erica assemble and lead a team to Earth. They were to bring back about two scores of men. Their rocketship landed in the US, and they expertly captured a bus full of university professors. These were on their way to compete in a baseball match, and were thus athletic.

However, as they were tying up and processing their catch, the coach of a nearby university, Lionel Manning (secretly the Prince) came in. He was investigating why his colleagues were late to the match. Erica and her operatives couldn’t overcome the powerful Prince in hand-to-hand combat, so she paralysed him with the Venusian green ray.

This in turn attracted Moon Girl. She came looking for the Prince and easily defeated the Venusians. As Moon Girl was busy checking on the Prince, the Venusians fled in their rocketship with their captives.

However, Erica irrationally decided to turn back and attack anew. She was impressed with the Prince and wanted to have him. She also couldn’t bear knowing that he was with Moon Girl.

Discovering their secret identities using their telephoto screens, Erica and her girls attacked during a senior prom ball. However, Moon Girl defeated them. She then forced the Venusians to free their captives before she let them leave.

Like the rest of the Venusians, Erica is an athletic, Caucasian-skinned late 1940s beauty in a green minidress. Moon Girl noted that the Venusian girls were so attractive that the captured men would probably not have minded their captivity much.

Erica is a blonde on the splash page introducing the story, but a brunette in the story proper.

Erica seemed to be a competent and loyal agent used to special operations. However she had never met a man as attractive as the Prince before, and was completely overcome by jealousy toward Moon Girl as she had never experienced that emotion in her life.

“These Earth-women are not as inferior as I imagined ! The green ray will take care of you…”

“Not until this moment have I ever known jealousy ! I hate her because she is with him !”

Moon Girl was very much inspired by Wonder Woman, and most of her opponents can be recast as Golden Age Wonder Woman foes.

The stats are highly speculative due to the limited material. 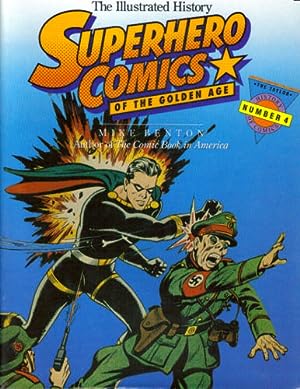 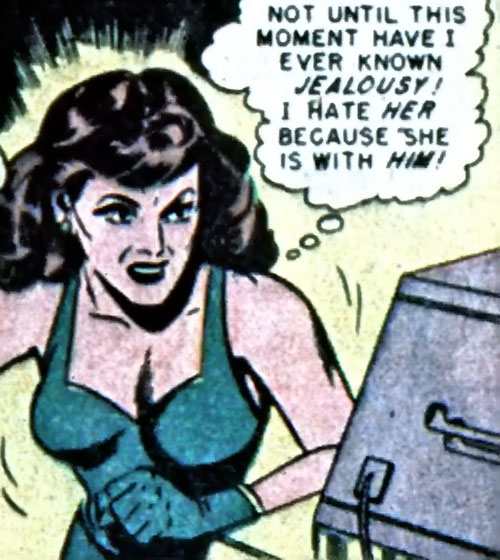