Escher was a minor villain in the 1995-1998 DC Comics/Chris Claremont book Sovereign Seven.

He was themed after a famous artist with a maths-inspired style, and often teamed up with two similar characters.

Escher is capable of creating large scale illusion, capable of covering a fair sized building. He frequently makes areas resemble pictures by M.C. Escher , seeming to operate in defiance of gravity and logic.

He frequently makes himself appear to be in a different place to his actual position, making him hard to hit.

He has also displayed the ability to prevent sounds from escaping his illusions.

Escher took his name from the artist M.C. Escher, whose work he tries to copy with his powers.

Escher either received his powers, or had them boosted, by Neron. In return for this, he joined the Dystopia team to serve Neron.

One key job was trying to kill the sister Violet Jones and Pansy Smith. The two ran a Coffee Bar called Crossroads, where Sovereign Seven worked.

When Dystopia attacked, Violet and some of the Seven were in Gotham. Dystopia quickly overcame Cruiser, Rampart and Pansy, and held them captive until they could also capture Violet.

Cruiser and Rampart were freed by Daisy Miller, Violet and Pansy’s cousin, and her friend Casey Rassendyll, who had been in the bar when Dystopia attacked. They managed to overcome Escher and Arcimboldo. They were then handed over to the authorities.

Escher is arrogant, seeing himself as superior to those around him, although he doesn’t usually express this to his team-mates.

He avoids physical conflict, preferring to let his enemies hurt themselves against his illusions.

“Behold, my fellows, our target ! Be creative. Slaughter with style and wit. Ours is ever the art of chaos !”

“I spit on your rules, girl. Dystopia are artists, and our canvas, all creation ! Our tools – thanks to Neron, all praise his unholy name – the very fabric of reality.”

Bonuses and Limitations:
Intangibility is Contingent Upon Illusion (-1). 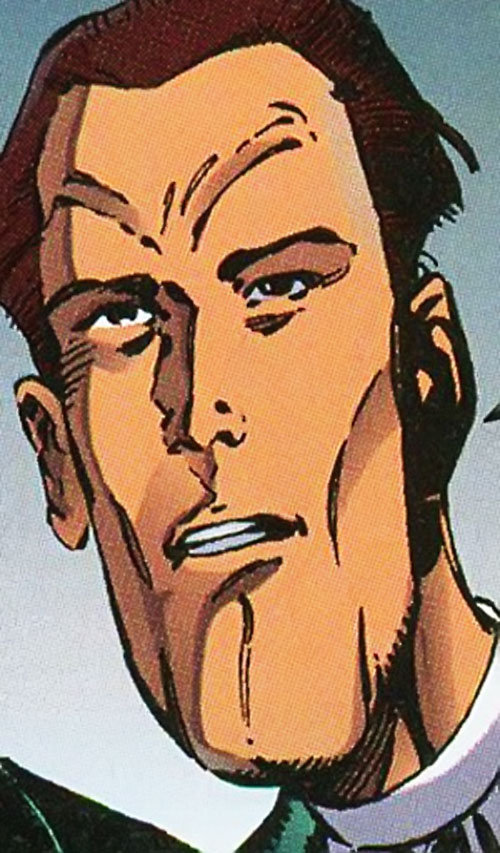