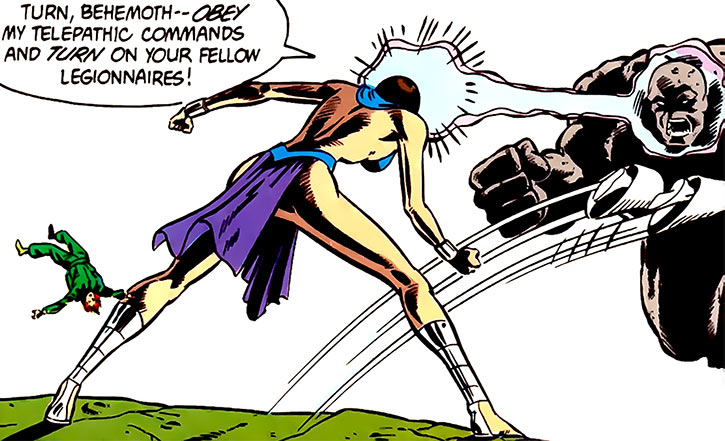 Esper Lass also has the normal intensive scientific education given on Titan and is familiar with spacecraft (Scientist, Vehicles (Space)). She is the only known humanoid to master Gil’dishpan dimension-travel technology, a subject which has mystified even Brainiac 5.

Meta Ulnoor was considered the most promising young psychic to emerge on Titan since Saturn Girl. Only her temper and arrogance interfered with her achieving power levels equal to the Legionnaire.

While many of Titan’s best teachers tried to rein her in, Meta threw away a chance to achieve high honors on Titan in order to challenge Saturn Girl for her spot in the Legion, in 2981.

When told that Legionnaires must have unique abilities to qualify for membership, she organized the Legion of Super-Rejects to contest with their Legion counterparts for their place in the Legion. They showed impressive power, but arrogance and poor teamwork. As a result of the latter, they lost their fight. 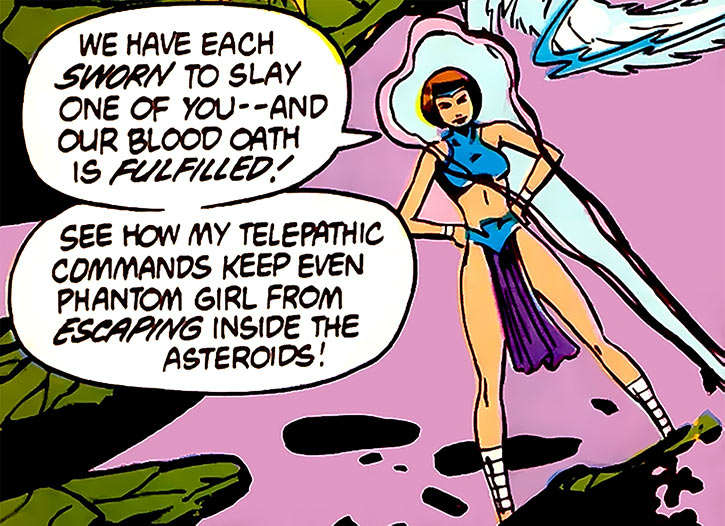 Angered and shamed, she and her teammate Magno Lad joined the Legion of Super-Villains in hopes of gaining revenge. They were later joined by fellow Super-Reject Micro Lad. Esper Lass was one of the most eager participants in the LSV’s massive assault on the Legion of Super-Heroes in 2985.

She was extremely valuable for her ability to telepathically coerce or control her more psychotic or uncooperative teammates, such as the mad Daxamite Ol-Vir. She also secretly leeched all of the Gil’disphan Zymyr’s dimensional-travelling technology from its mind.

Nevertheless, she was captured with the remainder of the LSV and is currently in custody on Labyrinth, the United Planets prison-world.

A fit, curvy woman with brown hair shaped in a bowl around her head.

She doesn’t so much wear clothing as a few scraps of cloth designed in the 1970’s disco era. She has silver boots, a lavender loincloth, and a suggestion of a blue blouse which still leaves her back, midriff, arms, and legs bare. She also wears a blue tiara or headband.

She is outspoken and intelligent, though her intelligence is blunted by the fact that she’s also a stereotypically arrogant, gloating, overconfident villainess.

“Imra Ardeen… Saturn Girl ! Nobody will remember your name once I – Meta Ulnoor – take your place in the Legion as Esper Lass !”

“We have each sworn to slay one of you – and our blood oath is fulfilled !”

“Turn, behemoth – obey my telepathic commands and turn on your fellow Legionnaires !”

In the post-boot reality, she could replace the outlaw telepath Nara Minsork, who once tried to strip-mine Brainiac 5’s mind.

Equipment:
As a member of the LSV, Esper Lass has access to technology stolen or copied from the LSH, allowing Flight and survival in space. See the LSH Equipment writeup for details.

She may have other telepathic powers she has yet to demonstrate, such as Life Sense or Mind Blank ; there is some indication that she may possess Control: 08. 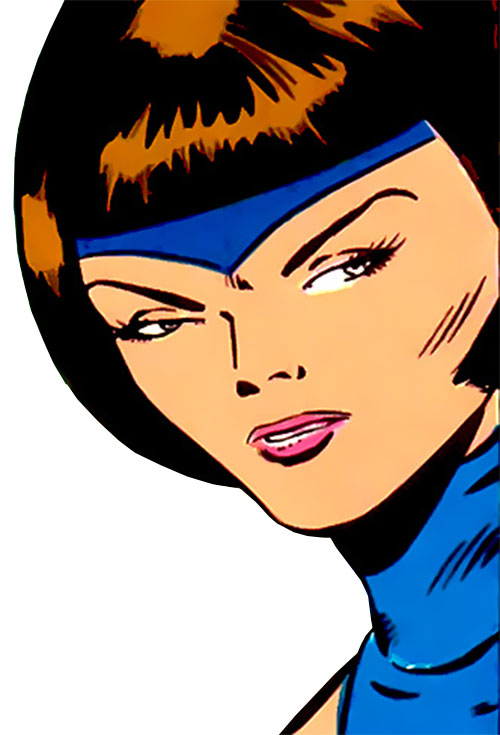 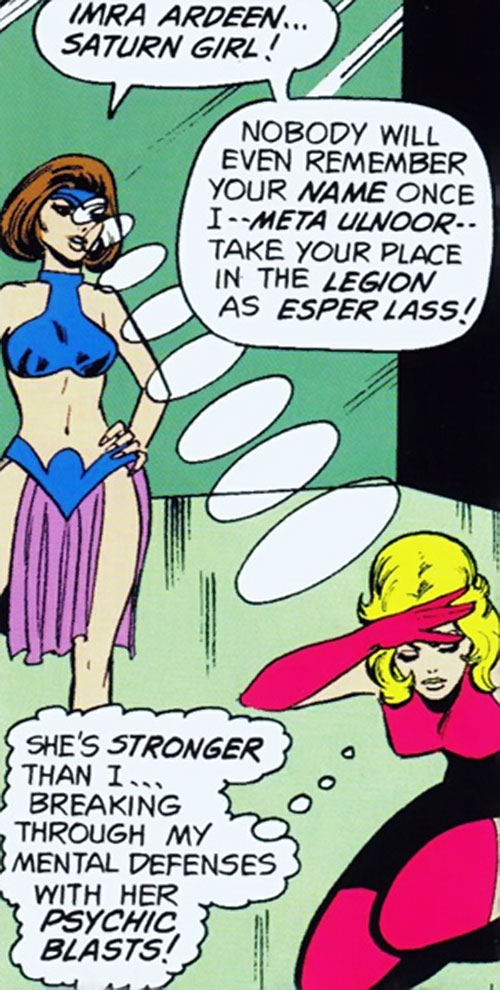