Eudico is a notable Non-Player CharacterRPG characters not played by a player, but by the gamemaster or the computer. in the Warframe video game. If you ain’t familiar with it, you can read our Warframe setting article for context.

This profile has S P O I L E R S for a popular, well-regarded missions series in the game.

She carries an enormous blowtorch-like thingie. This suggests that she’s also a skilled welder and/or industrial cutter. Otherwise she wouldn’t carry one, and let the experts handle it.

Most of her body was replaced with mechanical body parts. Their capabilities are unrevealed, but she presumably can withstand the cold and atmosphere of Venus. She also once threatened to rip somebody’s arms off, so she presumably has enhanced strength. 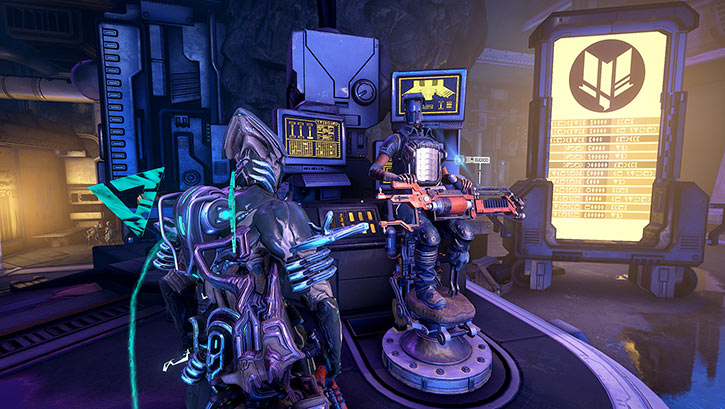 Cold, the air and water flowin’

Venus was at least partially terraformed during the Orokin era. It remains partially habitable.

This planet is under the control of the Corpus. These are one of the major powers that emerged after the Fall of the Orokin. Organised as aristocratic corporations, the Corpus officially worship the concept of Profit. Their society is a terminally capitalistic, predatory one.

During most of the game’s events, the Fortuna area of Venus is under the control of scheming senior Corpus plutocratA person who’s in charge because they’re rich Nef Anyo  .

The workers in and near Fortuna call themselves the Solaris. It is possible that they originally come from a variety of cultures across the Solar System. They do not consider themselves culturally Corpus.

Technically, the Solaris are freemen. But in practice :

A standard arrangement for an experienced worker is to have relatively few organic parts left. But the key one — their head — will be enclosed within their armoured chest. Revealing one’s organic head, by rolling up an armoured panel in the front, is a major sign of trust.

Technically, it is possible for a worker to earn enough money to buy their organs and limbs back – and retire. In practice, absurd interest rates that change at a whim make that nearly impossible.

Furthermore, debts are inherited by children.

Hard, the land we call our home

The terraforming systems keep certain areas of Venus’ 450+°C (850+°F) surface habitable. However, they are ancient and damaged. Maintaining them is an arcane art, and it involves actual seas of special coolant liquid.

The coolant lakes, rivers, etc. form much of the geography of the terraformed areas. There’s a breathable-with-special-equipment atmosphere, and even an ecology – with plants and animals. Even the coolant lakes have “fishes”, though there are actually small Orokin environment monitoring robots.

Venus is being recklessly mined by the Corpus. Nef Anyo cares little about the consequences – he wants all the money, right now. But this adds considerable headaches for the workers. Not only must they maintain the coolant and atmospheric systems, they must also find ways not to inflict geological damage through mining.

Sufficiently incautiousDone without caution mining will heat up underground coolant, pushing it up to open fissures. From there it can heat up the rest, and begin a chain reaction that would revert the terraformed area to native Venus conditions. 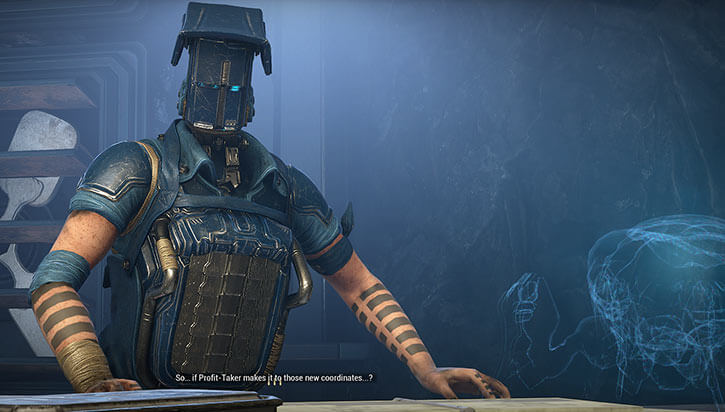 “We all lift together” is a Solaris work song, as well as their clandestine union’s anthem.

(The “robot” that drops in at the end is a Mag-class warframe – presumably the first agent sent to Fortuna by The Lotus. We can hypothesise that it is the same ‘frame that helped Little Duck on Earth, as will be discussed in the History section).

Years ago, Eudico (officially floor boss FB-9) was working at Deck 12. This was a peripheral exploitation site for the main Fortuna town.

Though it was hideously dangerous, the crafty Eudico was successful. Part of this was made possible by her lieutenants. Known ones are :

As it grew big and successful, Eudico developed the secret identity of Vox Solaris, the union leader. Vox’s video communiqués were an efficient way to provoke Nef Anyo into overreactions, and make him look bad toward his investors.

As Vox Solaris, her voice was heavily distorted. She also wore a mask that was a caricature of Nef’s face. The mask coincidentally resembles the Guy Fawkes mask worn by V in Alan Moore’s V for Vendetta.

Solaris United gained genuine power and leverage. Eudico thought that she could face Nef Anyo’s forces in a more open manner. Presumably, SU workers were by then able to face the ordinary taxmen Corpus androids.

However, Nef sent in a special proxy — an animal-shaped combat robot — called the Exploiter Orb. An Orb is a sort of titanic spider, a practically indestructible mechaSome form of cool sci-fi super-vehicle or super-robot. The confrontation at Deck 12 was a disaster, and most SU activists were slain.

A handful of survivors — including Eudico and The Business — made it to Fortuna. The devastation had been such that their secret was still intact. Only one of the Zuud survived, and was left severely traumatised by the loss of her sisters.

Push, to keep the dark from coming

Eudico’s morale was broken. She stopped her union activities, and The Business couldn’t carry on alone. Some of the few SU survivors also blamed Vox Solaris for the carnage.

She continued some clandestine activities. But these were mostly to protect the youngest workers.

Eudico also tried to care for Ventkids. These are a subculture of orphans and thieving cyborg urchins living within Fortuna’s infrastructure tunnels.

Ventkids have their own barely comprehensible patoisA variant form of the dominant language, usually used by low-status subcultures. Though some expressions (“checkcheck”, “glinty”, “howzit”, etc.) have made their way into mainstream Solari language.

They also have their own style of music (“skeg”), collections of digital comics (“graphica”) and graffiti art (“scrawls”), folk tales (particularly of the warframe Yareli) and much of their culture revolves around “planks”. These are K-drives – basically jet-powered hoverboards. 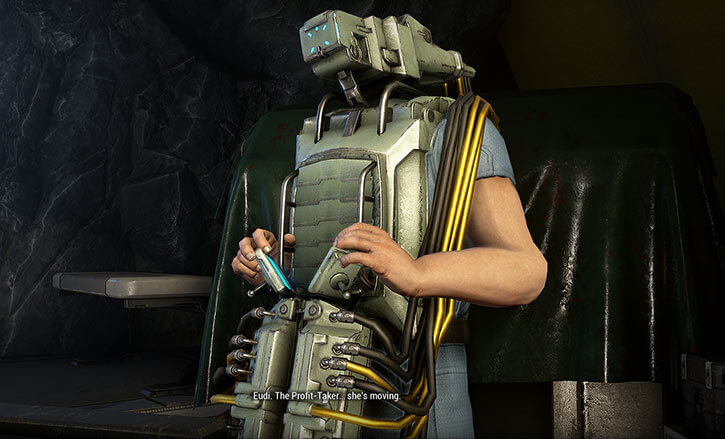 Before he retired from murderation, The Business had an apprentice. She went by Little Duck. But they had a falling out.

During a foray on Earth, she attempted to help a blind local hunted by Grineer troops. This would have had fatal consequences, but agents of The Lotus were on the ground.

After a Mag-class warframe destroyed a Grineer contingent, Little Duck allied with it and the blind girl.

They got out by the skin of their teeth. Though it’s not clearly stated, we can guess that Little Duck formed an alliance that day with both The Lotus and the Unum (!).

The Unum is a mysterious Orokin-era entity on Earth, with extensive knowledge about the Void. It is represented by the Quills, a sect that Mitsuki — the blind lass — joined.

Little Duck eventually returned to Fortuna on Venus. The Quills were interested in acquiring Orokin-era components that the Corpus had been digging up and studying there. 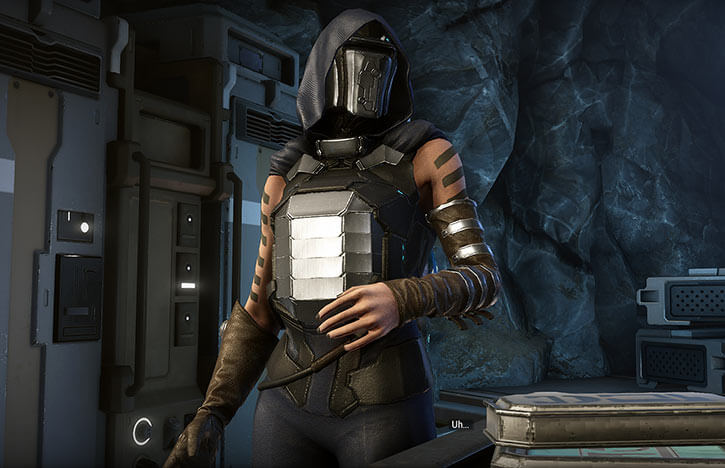 It was presumably Little Duck who requested that The Lotus direct her attention toward Fortuna. A few Tennos were sent there, to liaise with Eudico.

(Nef Anyo had become a problem for The Lotus, and they clashed multiple times. Backing Solaris United to undermine his financials was therefore an interesting angle for her.)

Though The Business still sought to relaunch Solaris United, Eudico didn’t want to. She instead demanded that the Tenno prove themselves by providing low-key help to the locals.

But though lives were saved, one of the few survivors of Deck 12 made a mistake, and was slain by Corpus taxmen.

Eudico and her engineers had found ways to restart an Orokin coolant tower. This had previously been thought impossible. Nef wanted them to do that live in front of the shareholders, but the delays he gave were ludicrously short.

Not only was the task impossible under short notice, but rushing the job would destroy the entire Fortuna terraformed area.

Eudico had little choice but to frontally oppose the Corpus. And become Vox Solaris once again.

Strong, united, working ’till we fall

Eudico is voiced by Tamara Fritz  .

Eudico is constantly juggling running chainsaws on the go. She has to oversee a large workforce as a floor boss, negotiate and provide assistance to other parties such as the Ventkids, and deal with the trauma of Deck 12.

This is on top of her role as Vox Solaris. There she must deal with internecine conflict, ensure that security is tight enough, recruit and train new union members, and liaise with Tennos when these are available for operations.

Furthermore, her personal hacking skills are necessary for many of the most sensitive operations.

So she’s constantly working, running left and right, worrying her head off and somehow managing to stay focused.

Here’s a video that shows Eudico, Fortuna interiors and exteriors, The Business, Little Duck, Corpus taxmen and proxies, a K-drive ride, the Vox Solaris voice and mask, etc.. In 2160p.

It’s a short mission that’s designed for speed, done on a panther-like high-damage berserker endgame warframe. So it’s under six minutes. Some of the NPC comments even occur with some lag, after the kills are made.

I hadn’t done that mission for a while and I’m not using my normal voice commands but heh, it goes well enough.

Except for the part where I tried to show off by doing a K-drive grind along the road’s railguard. And realised that I had forgotten which key press does that.

“Outstandin’. Now get out there and void some muckin’ warranties.”

“Nef wants the ventkids gone, and I’m wedged between a roller and a pit. Stealin’ Corpus supplies? Spendin’ night-cycles bangin’ out music in the walls? My heart bleeds for ’em, but I don’t do somethin’ Nef’s gonna start askin’ questions. About me.”

(As Vox Solaris) “We are the used. The mutilated. The indebted. We are Solaris United. And this Tenno is our messenger. (beat). Hello, Nef.” 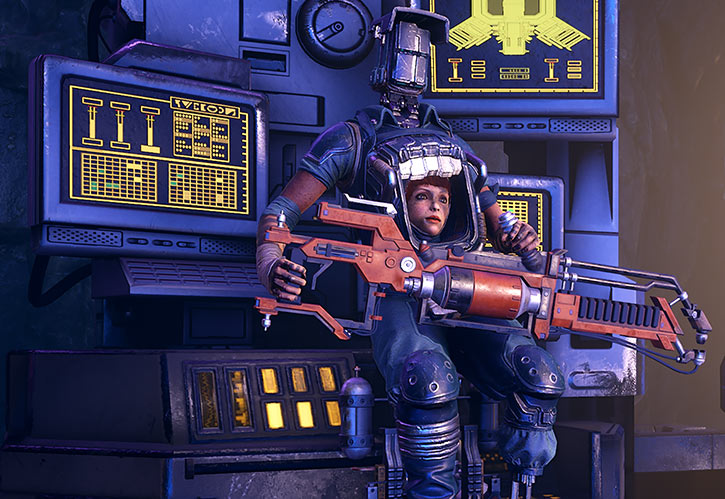