Evergreen is tied into nature itself and as such has powers overplants and nature. Her body itself is slightly composed of plant matter.

She knows not from where she came, she only knows that her spirit is as old as all the forests there have been since life began.

She knows not why she was summoned, she knows only that she must protect the Earth from those who would abuse her.

She is of the old days, when the Earth was not ruled by men, but by the elves and dwarves and goblins as well.

Spirit of the water remember !

Spirit of the Earth remember !

Evergreen stands atletically with a dark brown complexion and green,leafy hair and emerald eyes. Her costume is green, as are her gloves and boots (which look as though they have pine needles coming out of them).

Evergreen is a very proactive person. She will protect the Earth anyway that she can. She also knows of Shocker’s feelings toward her, and to some extent reciprocates them. But she still has a job to do and she will do her duty.

There are many people that could’ve brought Evergreen to Earth. Swamp Thing, The Floronic Man and Poison Ivy to name a few. Either way, it’d be almost definate that she comes from the Green itself. 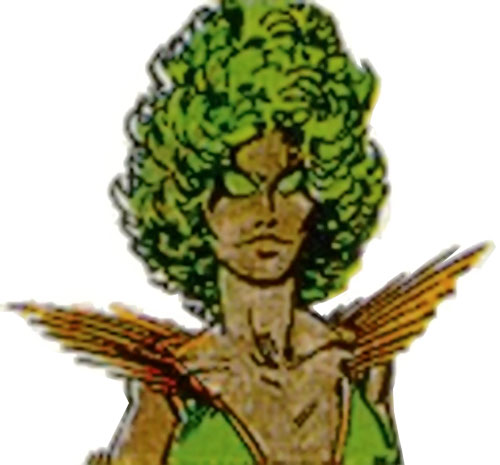