The Mangrove Hag is a troll. As such she’s tall, robust, regenerative and able to hold her breath to hunt in the swamp.

She is skinny and not a particularly physical person. However an indifferently trained human fighter would find her dangerous due to her reach and size. And even a skinny troll is stronger than most humans.

Thanks to her familiar giving her lengthy visions from the life of its previous owners, the Hag is a capable scribe, bookbinder, illustrator, books copier and papermaker. Nothing spectacular or sophisticated, but good enough journeyman work.

She also has background knowledge of various areas of magic, as if she had gone to mage school. And she has adequate medical skills when it comes to house and feral cats – she’s not a real vet, but that’s usually sufficient.

She has been taught magic matching her nature – which means that her spells are not pleasant. Most of her spells aren’t traditionally cast. They are… expectorated as she belches out semi-material vapours that rapidly become a magical effect.

Birsk is a primitive troll from the Feerrott. Once a part of the small continent of Antonica, the Feerrott became an island on its own after the Sundering.

Though her people may once have been a tribe of greater standing, they never recovered from the Sundering. They remain rag-tag post-apocalyptic survivors living deep in the swamp. They had little left in the way of culture, technology or traditions.

They are of course not animals, but one could be forgiven if experiencing doubts on the matter.

When a small band of lost adventurers stumbled upon this isolated corner of the swamp, the trolls attacked as an impromptu pack. Though the trolls were in bad shape from malnutrition and diseases, the adventurers were even worse off. Thus, the trolls won.

One of the intruders was a mage. It was she who inflicted the bulk of the losses before being overrun. Birsk caught the woman’s cat familiar in her huge hands. Though to a troll a cat looked like a perfect snack, Birsk liked the way the feline looked. She wanted to have it as a pet and ornament. As her occasional mate tried to yank it from her to eat it, she punched him in the face. 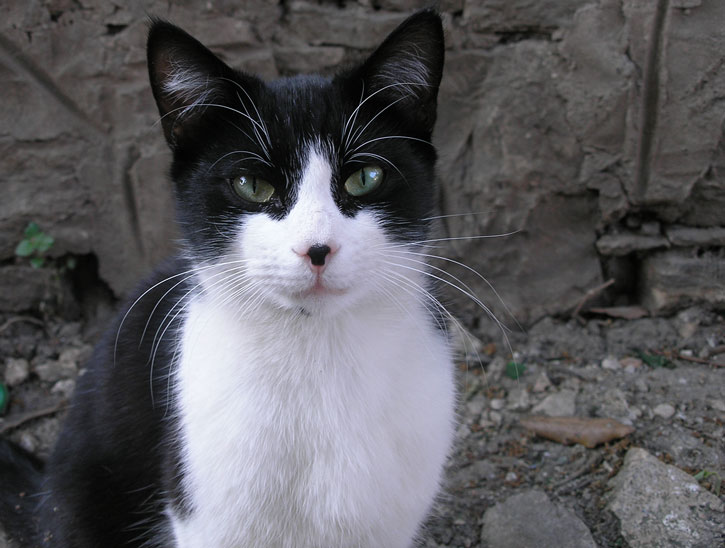 Source: wikimedia commons. Let us know if you’d rather have your cat featured here instead. Fame at last !

The brawl degenerated and other trolls came in to eat the cat and check the corpses. Birsk ended up braining her mate with a rock to survive and intimidate the others away for a short while. She then struck out on her own. The latter was a common behaviour among the tribe, who seldom spent much time together to avoid sharing food.

Though the mage wasn’t terribly powerful, her familiar was quite experienced. The ageless feline had already accompanied three mages, including the woman’s father. Over the years it had grown in intelligence, telepathic skill and in its ability to help focus and increase his partner’s magical power – as good familiars do.

While it was worn as a sort of living hat by Birsk, the cat made contact with the troll’s dim mentality. Feeling lonely now that her mate had died, Birsk liked communicating with the cat. To the feline’s surprise, she turned out to be a diamond in the rough.

The troll was actually smart and with clear magical potential. But she was thoroughly held back by her lack of education, poor health, poor nutrition and squalid hand-to-mouth environment.

The two quickly became friends. The cat gradually taught the troll by sharing memories of his previous partners. The symbiosis worked remarkably well and over the years Birsk learned magic, writing, some basic crafts, the Common language, etc.

After living alone in a mangrove for three years, Birsk (known to locals as the Mangrove Troll or the Mangrove Hag) had enough money for some crude clothing and supplies. She could also buy passage to the ocean-side trading city of Gorowyn .

To the resident’s considerable surprise the Mangrove Hag established herself as a public scribe, books copier and accountant. She had a side business as a paper maker, bookbinder and illustrator (mostly to reproduce illustrations when copying books). Her income bought lodging, magical supplies – and further magical instructions from Sarnak  witches.

After one such outing she was contacted by the mysterious Gitane (Carmen Bayle). The Hag thus became the first troll to join the enigmatic Network.

The Mangrove Hag is a tall, lanky troll.

She wears a rough off-white dress and thick, reinforced leather boots and gloves. Though the fabric of her torn dress seems remarkably crude, this is deliberate. It’s made of resilient fibres from Feerrott swamps, which can be cleaned using corrosives without being damaged.

She wears a traditional bit of troll headgear – a sort of body art around her head made using giant lizard bones. It symbolises the maw of an evil god. It is probably meant to represent Innoruuk or Cazic-Thule, but the Mangrove Hag’s people have long since forgotten the names of their gods.

The Hag uses a sort of cologne smelling of sandalwood. This is intended for cats. It blocks her trollish body odour that might cause cats to flee, and sandalwood smells are pleasant and relaxing for cats. It also gives her an olfactory signature that felines easily recognise.

The Mangrove Hag is a grumpy loner. However, she gets markedly more approachable when dealing with subjects she likes such as books, cats or earning money. Still, she’d rather do business and be on her way, making her income through affordable prices rather than snazzy saleswomanship.

She is a sort of bibliophile collecting books, scrolls, tablets, papyruses, etc. with interesting texts. She will often then copy them and sell several copies to recoup the cost of buying the book.

On top of her activities as a scribe, this keeps her rather busy. As a result, she is quickly coming to prefer forays in the deadly jungles as a source of income and perhaps rare documents.

The Mangrove Hag is crazy about her cat, who is also her best friend and remains to an extent her mentor. She’s a cat lady, with a strong emotional involvement in taking care of all nearby small felines.

These are specially imported from Qeynos, Neriak and Freeport. A handful of entrepreneurs there sell to mages and aristocratic cat lovers.

The Hag’s hovel is also popular hangout for the area’s stray cats. These have quickly learned that it was safe to come there for food and grooming – and to get rid of lice and worms. They occasionally bring half-devoured rodents as gifts, which the troll appreciates as light snacks.

The resulting increase in life expectancy for cats around Gorowyn has had clear effects on rodent infestations. This made the Hag surprisingly popular in town given her gruffness. The local Sarnaks use scaled wolf puppies for rodent control, but cats are much deadlier than baby scalies.

The Hag’s feline familiar is not a combat asset. It carefully stays out of the way when things go ugly. At best, it will do some safe-looking scouting ; mostly it serves as an adviser, sentinel and academic aide (for instance for translations). If her beloved cat is ever threatened, the Mangrove Hag will go completely berserk.

Bonuses and Limitations:
Sealed system is Free Diving Only.

Bonuses and Limitations:
Medicine is Specialised in veterinary care for cats.

I haven’t played this character in ages, so this entry is closer to my character concept than to how she actually played in-game.

Source of Character: Based on an Everquest II Player Character. 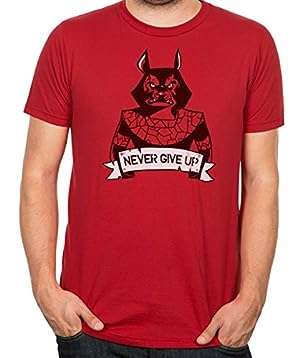 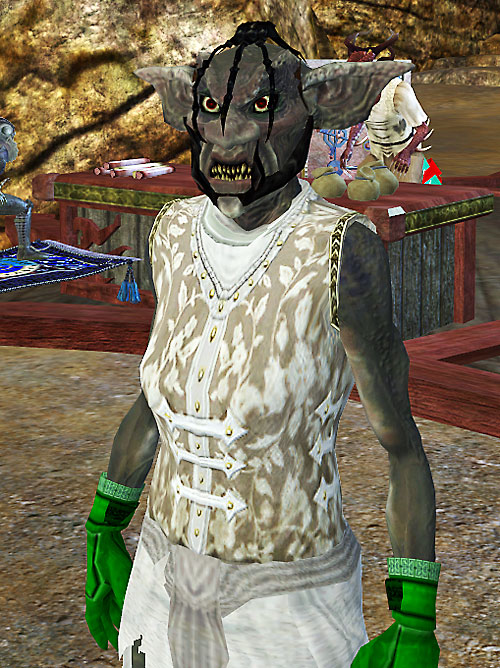 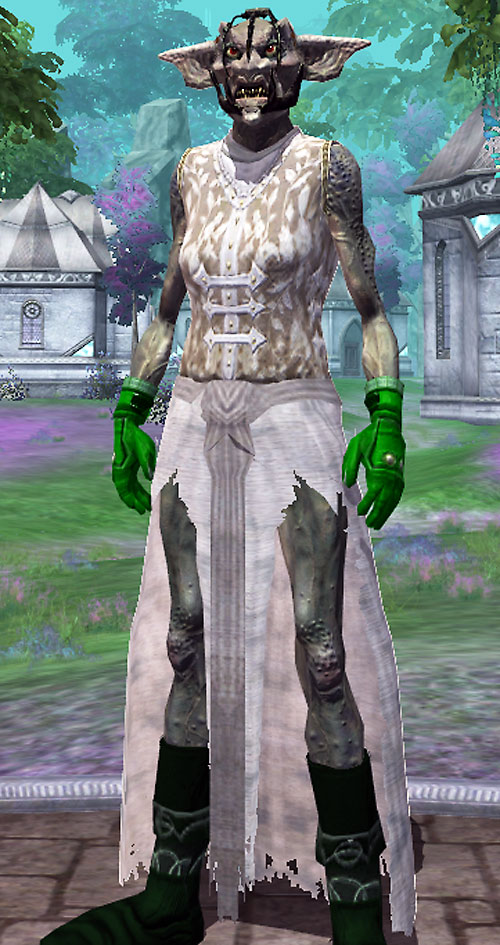