One assumes he’s still a good swordsman and charismatic orator, though he didn’t get to demonstrate these talents this time around.

In this version, the Every-Man is equipped with a sort of heavy energy rifle called the Absorbascann. This powerful, futuristic weapon can do at least two things:

This weapon was probably a joint project between the Secret Empire and Dr. Faustus. However, Faustus preferred to present it as the Empire funding his work.

The first mode is activated by doing a sweeping shot, but it seems that what it actually does is establish a field centered on Every-Man (and moving with him). Anybody within the field is gradually drained of their vitality, whilst Every-Man instantly gains a high degree of superhuman strength.

Indirect estimates put Every-Man in the “Class 75” strength bracket, perhaps even “Class 80”. We *assume* that the population density determines how strong Every-Man gets, and that the middle of Manhattan was the maximum level of strength he’s likely to get.

The strength-draining effect, however, will eventually prove fatal to the masses as they weaken until their breathing and heartbeat stop. People have to be removed from the field to survive.

Once the initial field has been erected, Every-Man can trigger a new burst of strength-draining telepathically, even if he’s not carrying the Absorbascann. One imagines that a/ it’s done via cybernetic radio and b/ the Absorbascann has to be within the field.

Being shot with the beam made it very difficult for Reed Richards to concentrate, and robbed him of the bulk of his scientific and technical skills. One imagines that it would leave most other persons on the intellectual level of a bacterium. Howbeit, it is probable that there’s a “floor” to the effect, leaving people completely average.

The damage may have been permanent. Richards and Parker had to reverse-engineer the Absorbascann to restore Richards’ faculties. Our game stats assume that natural recovery is possible, but occurs very slowly.

Since the beam was presented as a means to erase advantages and leave everybody equal, it is possible that it can affect other attributes such as high agility, charisma, perceptiveness, attractiveness, etc.. This is too hypothetical to add to the game stats, though.

With the backing of the Secret Empire, Dr. Faustus had retaken control of his Fennhoff Institute.

Just like with “Steven Rogers” (a.k.a. William Burnside) and Jack Monroe before him, Larry Ekler was thus turned into a weapon instead of being cured.

He was an excellent fit to operate a super-weapon developed by Faustus and the Empire. Even better, his quasi-familial ties to Reed Richards meant that he could easily get close to Mr. Fantastic. As one of the mightiest minds on the planet, Richards was an enticing target for Dr. Faustus to assert his strength.

Faustus easily brainwashed the vulnerable Ekler, playing on his obsessions to give a new form to his Every-Man crusade. He also likely trained him further in weapons operation and combat.

Talking about a revolution

Every-Man just knocked at the door of the Baxter Building and was let in. Having picked a day where Mister Fantastic was the only one in, he soon beat him up with his immense strength. Larry then shot Reed with the Absorbascann, demolishing the bulk of his intellectual capabilities.

(Larry likely then planted surveillance devices in the Baxter Building and the Fantasticar for Faustus’ backup plan, since their presence is otherwise inexplicable.) 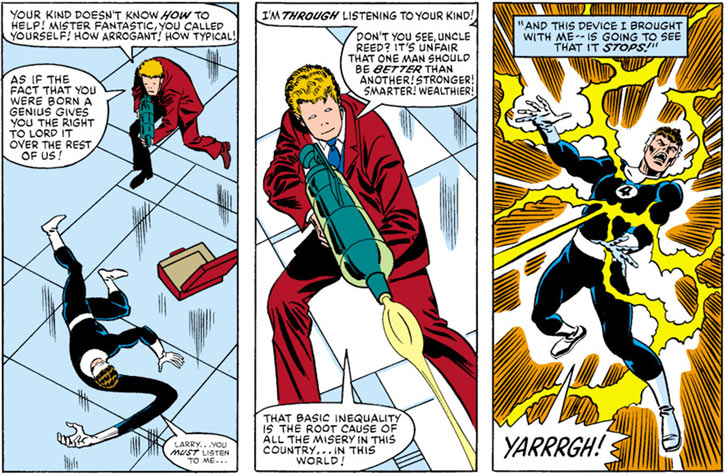 Larry then made his way to the steps of the 42nd public library to exhort the passerbies. When police officers aggressively accosted him, he killed at least one. To his dismay, the crowd fled as they could.

Meanwhile, Spider-Man had helped Mister Fantastic recover from the shock, and the two heroes intervened. They barely could contain the Every-Man, who could easily overpower being entangled by Mr. Fantastic or webbed up by Spider-Man.

As Spider-Man started hitting him, the Every-Man mentally triggered another strength-draining burst from the Absorbascann. This refreshed his strength, and more importantly it drained Spider-Man’s enough that he was no longer a threat.

Though he could barely crawl, Reed showed Larry all the people nearby who had been drained by the Absorbascann and would die soon. The Every-Man was horrified. Reed told him to run away from the city so people wouldn’t spend more time in the strength-draining field about him.

Larry Ekler was soon taken back by the Secret Empire. It is entirely possible that, seeing no alternative, he ran back to the Fennhoff Institute and Faustus of his own free will.

His masters would eventually create a third identity for him, as the Zeitgeist impostor.

Every-Man’s suit is probably of indifferent quality, given his beliefs.

Though his appearance might evoke the Question, it is obvious that his featureless “face” is a mask, especially when seen from the side. There isn’t the full faceless effect of the Question.

Larry is still clinging to his ideology, but it has evolved as a result of Faustus’ influence.

Now he wants to bring down those with overwhelming assets, such as great wealth, legal enforcement power or Reed Richards’ superhuman intellect, so that ordinary people aren’t overshadowed.

It doesn’t quite make sense, and it is obvious that Ekler isn’t well. However it is important to note that :

Yet, he does kill. He’s unable to genuinely control his temper, especially if physically accosted. There also was an hint that he wanted to show that his new strength was absolute, to affirm that he was special. Still, it didn’t feel like he would attempt his hostage-taking antics again.

“It’s a mask without features, uncle Reed. A mask that could be any man… or, possibly, every man ! But I’m not the same Every-Man I was before. My doctor at the institute saw to that. I’m different now, uncle Reed. I’VE GOT POWER !!!” (BLAM !)

“My friends, my brothers and sisters. I am Every-Man. I come among you — not as your better, not as a leader seeking your support — but as one of you. It is my goal to fight for the equality this nation promises – and rarely delivers ! It is my goal to free you… so that you may know peace.”

The straightforward conversion is to send him after Superman with a version of the Absorbascann that will share Superman’s power equally between him and Clark Kent.

If you really like him he could have a connection to the Red not unlike Vixen’s, but allowing him to drain capabilities from people rather than replicate animal “powers”.

It stands to reason that the /STR/, Running and /BODY/ vary based on population density. Here’s a rough and utterly hypothetical table :

Presumably the effect needs to be renewed from time to time (once every 30mn sounds good).

It would make ample sense if other qualities were also enhanced. For instance I could easily see the Absorbascann also conferring APs of Running, Regeneration, Jumping, Invulnerability… However, there was too little on-panel time for those to appear.

The one exception is Running. Every-Man apparently ran all the way from the middle of Manhattan to some rural area where he wouldn’t harm anybody, and he was never caught. It is in fact possible that he ran all the way to the Catskills Mountains. That’s quite a run so Running is in, but as standards of proof go it’s so-so.

It is also possible that having high-STR persons around might amplify the Every-Man’s STR. That’s impossible to tell from the material. ”The STR level is at least equal to the highest base STR score within the Area of Effect” sounds reasonable, though.

The Numb effect of the Absorbascann has two very different settings :

In this case the Numb Power goes :

In this case the Numb Power goes :

I almost decided to clean the game stats from stuff that was demonstrated in his previous appearance, but is irrelevant to this appearance. But then, perhaps somebody will want to feature him in more detail, drawing from his other skills. So the game stats have everything.

This time around he made a smarter, more balanced use of his Hero Points.

The /STR/ is difficult to ascertain, so I went with calculations based on Reed Richards’ RV vs. blunt damage. Spider-Man’s comment about Every-Man being in the same class as the Hulk was dismissed outright, since it’s such a tired bit of dramatic exaggeration.

The /BODY/ is wholly arbitrary (or based on extensive writeups experience, if you prefer) and rests on the fact that Spidey is clearly pulling his punches, as he usually does.

Ditto for the recovery rate from the intellect-burning mode, and all these things the story is way too short to provide factual data about. 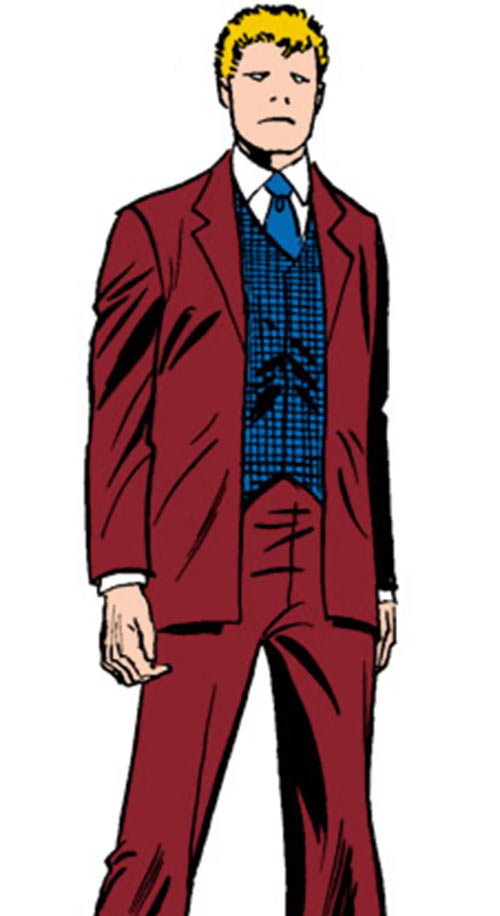 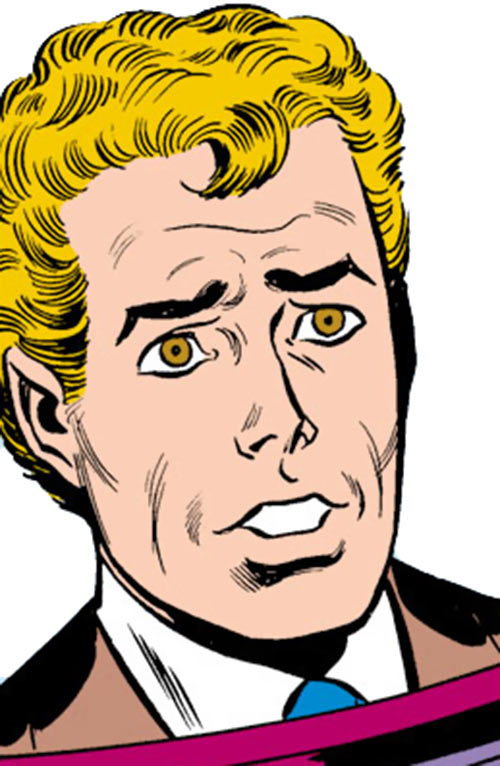