Larry Ekler has extensively trained himself in athletics, hand-to-hand combat and swordsmanship. His skill level seems low cinematic  at best though, since he didn’t have any special instructor (and may in fact have practiced solely by himself).

He has excellent reflexes, and can be a charismatic orator.

At this stage, Every-Man is armed with a tricked-out rapier and a shield. There’s no hint or indication that he built them. Our standard hypothesis in those cases is that it was a very minor, cheap job by the Tinkerer.

The shield was an ordinary kite-shaped job, likely intended to protect against handgun bullets. Every-Man shattered it by striking Captain America’s shield, but I suspect it was a case of comic book physics where it’s not the force that counts, but the hardness of the struck surface.

The rapier was a flexible fencing blade with a handguard. But its actual edge (so to speak) was that it could shoot lethal bolts of electricity. These could kill police officers in one blast, and shock even Captain America through his shield.

At one point, Every-Man shot cap’s shield in mid-air, making it bounce back as if it had hit a wall. He was good at quickly hitting difficult targets with his rapier, really.

As a teenager, Milton Ekler was a very close friend of Reed Richards. But during his senior year in college, Milton dropped out after marrying Carol. Carol died when their son Larry was but an infant, and Milton never really recovered.

Milton Ekler and Reed Richards gradually lost contact as Reed was continuing his intense scientific and engineering studies. Milton felt increasingly uncomfortable since his friend was so successful, while his own life just stalled.

For 20 years, Milton worked a factory job to put food on the table – especially since Larry was a sickly boy. Still, he kept telling Larry that in America, hard work and dedication could make anybody rich and successful.

Milton died with so little to his name after a life of dreary labour that young Larry couldn’t even afford a decent funeral. At this point, the fragile youth snapped.

The common man shall inherit the reins of power !

Larry trained for months to become some sort of revolutionary fighter and agent provocateur. His plan was hazy at best. But he seemed to believe he could convince ordinary folks that the American Dream was a lie, then trigger an uprising of the have-nots to seize power.

He also devised an armed, costumed identity for himself, the Every-Man. Apparently, he thought that he would be a rallying figure as well as a populist terrorist.

Having a certain charisma, the Every-Man did gather a small following among Hell’s Kitchen squatters, vagrants and runaways.

(Back in the early 1980s, Hell’s Kitchen was a dilapidated giant tenement rife with poverty. In the Marvel Universe, it and several other New York City neighbourhoods never underwent the gentrification process that took place in the real world in the following years and decades.)

City on the bills

Every-Man decided that Captain America (Steve Rogers) was the very figurehead of the “American Lie” that had, in his view, claimed the life of his father. After one of his hot-blooded young followers attempted to shoot Cap, Ekler decided to take action.

Summoning the press, he publicly challenged Captain America to a duel at the feet of the Statue of Liberty. When two NYPD officers came in to investigate the disturbance, Every-Man shot them dead with his rapier before fleeing.

During the duel, Every-Man didn’t fare badly – but he grievously underestimated Captain America. Cornered, Ekler took one of his own followers hostage in front of crowd. Increasingly losing his marbles, he started ranting that he actually wanted to become a celebrity and a big man as the guy who had “won” against Captain America.

It’s a padded cell for you, son

Cap tried to deescalate, but Ekler was rapidly growing incoherent. He claimed he would kill his hostage no matter what, just because. Cap then demonstrated his sheer physical power, before smugly claiming that he was a much better man than Every-Man.

This bit of reverse psychology worked – Ekler briefly lost it. This gave Cap the one second he needed to take Every-Man down without endangering the hostage.

Larry Ekler was promptly arrested. It was formally established that he was mentally ill, and he was soon transferred to a mental institute upstate, in the Catskills.

This establishment was called the Fennhoff Institute.

Yeah, that’s not the best costume design ever.

Larry Ekler lives in a fantasy world where he’s an invincible fighter, an historical leader of the downtrodden, a great man of destiny. He will lead hard-working, ordinary people in a great uprising against rotten elite in a sort of mix between a dumbed-down Marxist class war and reactionary populist soundbites.

Larry is full of vim, always in motion, talking a lot and elaborately. He soon projects the impression that he’s hyper, and as stress mounts it becomes more and more obvious that he’s deranged and could lash out at any moment.

Deep down he’s not political. He just wants to be famous by having some sort of impact on… something. Everything else is just means to an end, and he lacks the intellectual coherence to have a genuine ideology.

“I am Everyman ! Wielding a sword of justice – armed with the power of truth !”

“Never turn your back on the oppressed – it could prove fatal ! Your shield won’t save you now, Captain. Your days as a symbol of deceit are over and done !”

(After blasting Cap) “I DID it ! Ha-ha-ha !! I’ve destroyed the symbol of America’s fascistic, simplistic, avaricious ruling class !”

(Manifestly losing it) “I want to matter ! I want to stand up above the crowd ! I want to make all the rich pigs walk in fear of me ! This country betrayed him ! It bled him dry ! It told him he was a nothing — that he was worthless — just another face in the crowd !”

He’d work as an obscure Green Arrow villain during the late 1970s, using very similar themes and the same weapons.

This assumes that Every-Man burned his every Hero Points during his fight with Cap, chiefly on AV boosts and in the Block of Cap’s shield. Cap on the other hand spent very little (just LDDing a few RAPs, then some HPs on the shot that rescued the hostage). 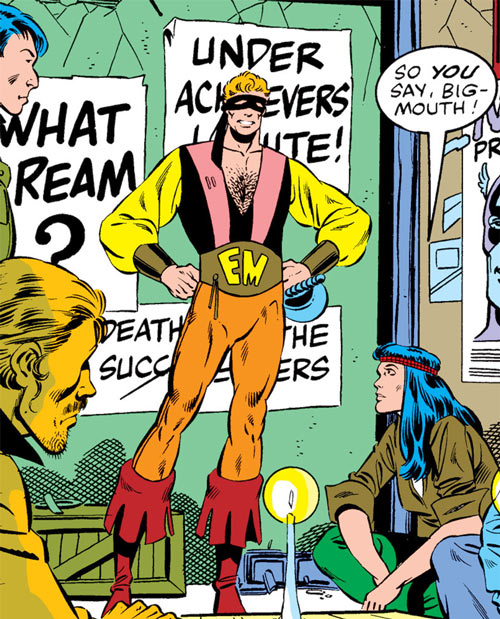 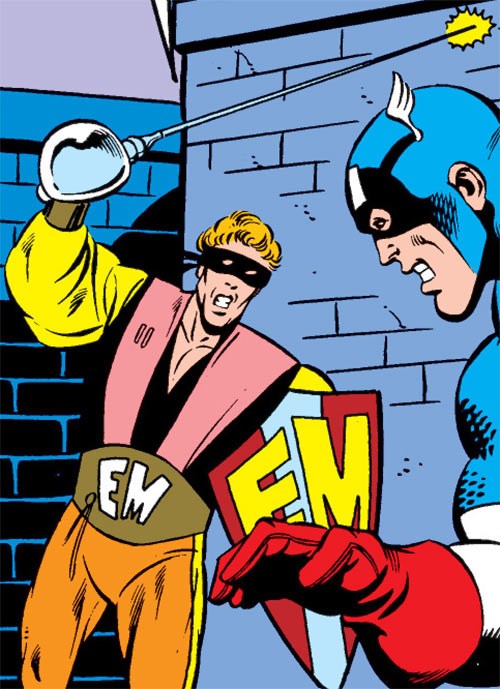