Evil Dead movies have a clear influence on a lot of subsequent action-horror stories, particularly in video games.

Ash Williams, played by genre celebrity Bruce Campbell, is the main character of the original series of films. He has became a classic figure of the everyman action hero, who demonstrates mad skills for no special reason.

Ash is quite strong and can take very heavy amounts of punishment. He is a surprisingly competent man with a multitude of useful skills including the use of weaponry, chemistry, mechanics, leadership, driving and physical fighting.

His main driving force is the need to survive, which will force him to do great things. He’s superbly adept at handling the shotgun, the sword and the chainsaw.

Ash is the lead character in the three Evil Dead movies. He used to be a salesman at the local S-Mart shop until fate chose something else for him.

While on vacation with his wife to see her father the forces of the Evil Dead struck them all. His wife’s father, who was an archeologist, had stumbled upon an old tome containing black magic and accidentally released the forces contained therein. The forces of darkness were released in the form of demons (possessing both dead and alive), living forests and such.

A slaughter followed in which finally only Ash survived.

For some time Ash was possessed himself but succeeded in freeing himself from this control through sheer force of will. When his hand was permanently possessed by a demon, he sawed it off with a chainsaw (Evil Dead 1 & 2). 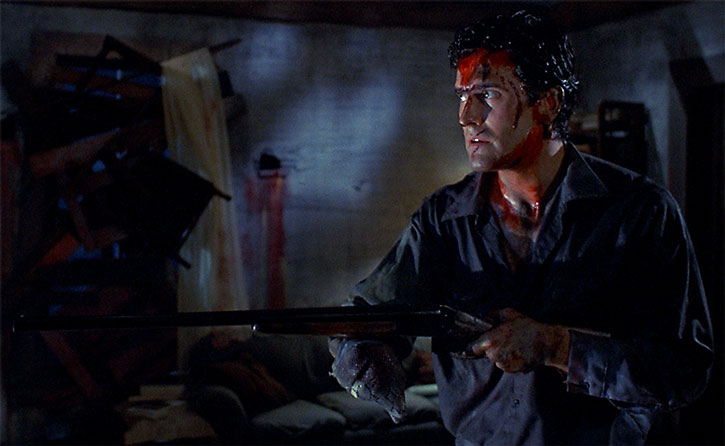 While actually managing to exorcise all evil with the help of his friends’ last words, Ash was also swept away by the forces of magic. He arrived in England in the 11th century at the time of the knights.

At first the natives tried to kill him by throwing him into a pit, an experience the zombie monster in the pit didn’t survive. After this he gained the respect of the locals and began trying to find a way back to his own time. In the attempts he accidentally released the forces of Evil contained in the book of Necronomicon, a source of black magic.

In the war that followed against the occult he lead the natives. they were now armed with some modern technology he had created together with the local wise men. The locals finally won the battle and the wise men tried to send him back again to his own time through suspension.

Ash is quite tall and athletic. He has brown eyes and black hair. Ash is usually dressed in simple clothes available in the time era he is placed in. In the medieval era he wore some rather cool leather garments, swashbuckler boots and a cloak.

Ash once seemed to be a nice salesman, but his experience with the occult has left him brutal and paranoid. He possesses a strong personality and is always set on survival. In fact, he often sets his own survival before those of others, and can appear very abrasive and off-putting.

Still, his strong personality and force of character, combined with amazing feats, often wins him the reputation, respect and popularity of a tough adventurer. Ash never wanted to be a hero, but to be left alone to work peacefully in his local S-Mart shop. In fact, he likes his job so much that he will take any opportunity to inform people of various S-Mart products.

Although a reluctant hero, Ash will always be ready for the forces of the undead when need be. Ash apparently prides himself in being a man of the future and looks down on the ignorant peasants who know nothing about ’alloys and things with molecular compositions’ (in his own words). 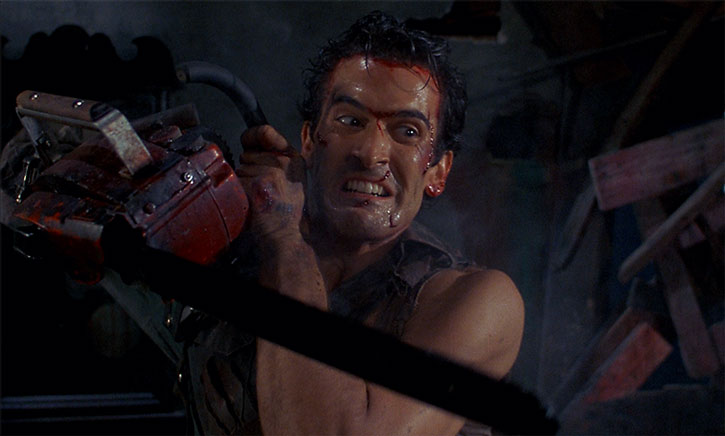 He is thus willing to use modern day science and knowledge, not only to win the day, but also to enlighten and impress the masses (although that’s a secondary goal).

Ash likes to talk tough and threaten or humiliate people that deserve that. The evil dead are subject to a constant stream of taunts of various kinds. Ash has the psyche of a true survivor and will quickly adapt to any new bizarre situation and use anything at hand for survival, but only after he has been scared out of his wits.

He is fully willing and able to burn himself badly or cut of his own limbs if his survival chances increase by doing so. He’ll even make some witty remarks while doing so.

“Then let’s head on down into that cellar and carve ourselves a witch.”

“See this ? *This* is my *boom stick* ! The 12-gauge double-barreled Remington. S-Mart’s top of the line. You can find this in the sporting goods department. That’s right, this sweet baby was made in Grand Rapids, Michigan. Retails for about $109.95. It’s got a walnut stock, cobalt blue steel, and a hair trigger. That’s right. Shop smart. Shop S-Mart.”

“Good, bad, I’m the guy with the gun” (just having blown away his evil twin)

“Your mouth is like my ass: nothing good ever comes out of it.”

“I may not be a smart man, but I know what killin’ is.” (Riffing on Forrest Gump) and of course the immortal

“Give me some sugar, baby.”

Ash fits well into the more brutal kind of occult adventuring. Perhaps best played in a solo adventure or part of a small group attacked by occult forces he could be used in low-powered campaigns.

Ash would make an excellent addition to the team of Midnight Sons or in a team-up with the Werewolf by Night of Marvel. Some involuntary vampire hunting with the I-Vampire would also be nice.

The creatures of evil, The Evil Dead, are a very important part of the mythos. Short comments of these are of use.

The demons of Evil Dead are typical demons with a high AURA. They are spirits (SL: Spirit Travel) and seem to prefer to possess a victim, make everybody insane by fear and then slaughter all other around them. The possessions are best simulated by Personality Transference of 8 APs. A weakness is that the victim is allowed a will roll to free himself as per the Control rules.

The victim, while possessed, has the Strange Appearance Drawback, approximately a DEX 04, STR of 05-06 and a BODY of 05 unless the victim had higher attributes himself to start with.

It is important to note that a possessed victim cannot be beaten/shot unconscious, but instead becomes inactive at full negative BODY APs, that is blown to bits or cut to pieces (Evil Dead I-III). This can be simulated by use of the Mind over Matter Power.

The skeletons, the animated dead, seen in the medieval period are most likely to have the same characteristics as they did before death. Now they of course have the Strange Appearance Drawback (Evil Dead III).

Evil Ash, seen in the Medieval Dead, had the same attributes as the original as well as the Strange Appearance Drawback and a Motivation of Nihilist (Evil Dead III). 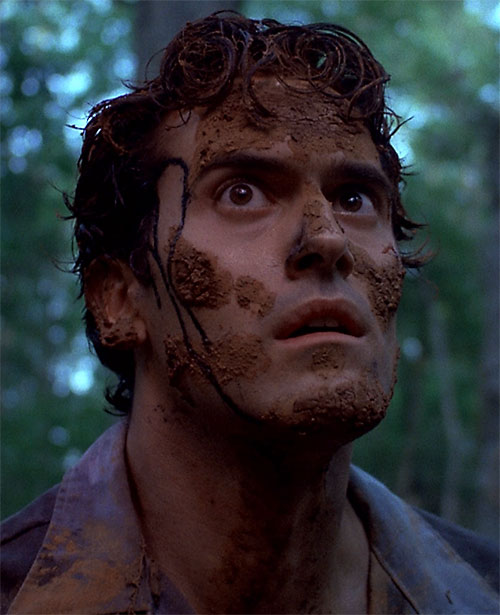 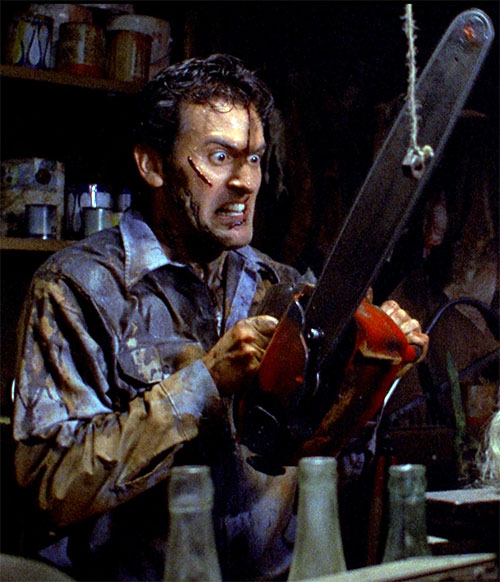 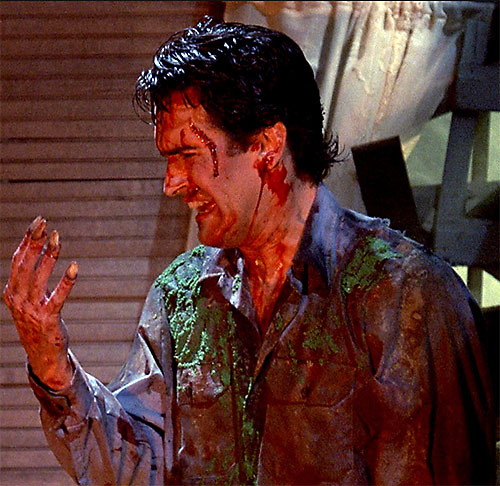 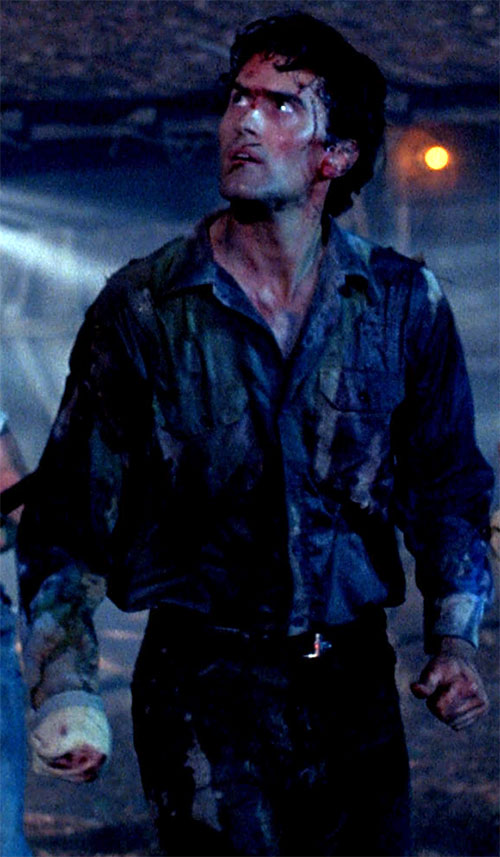 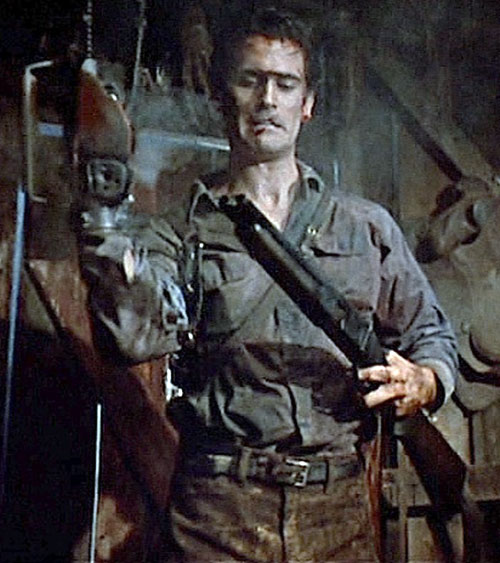 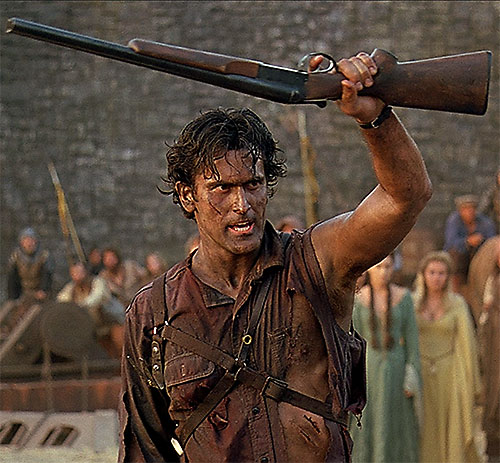 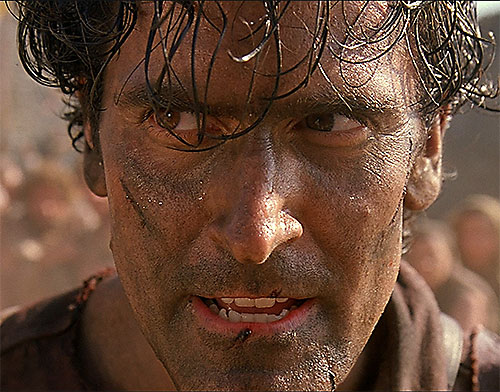 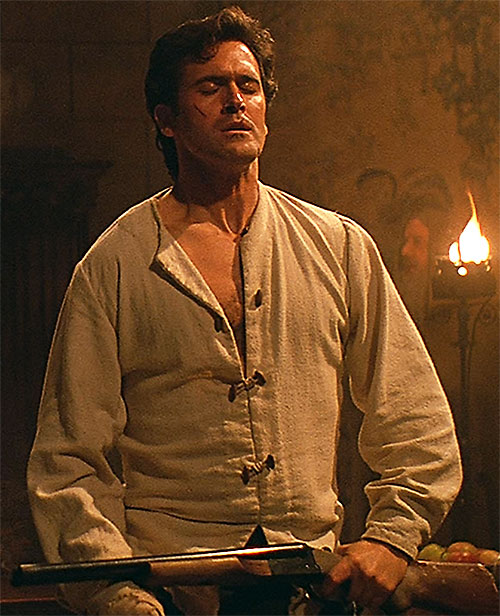 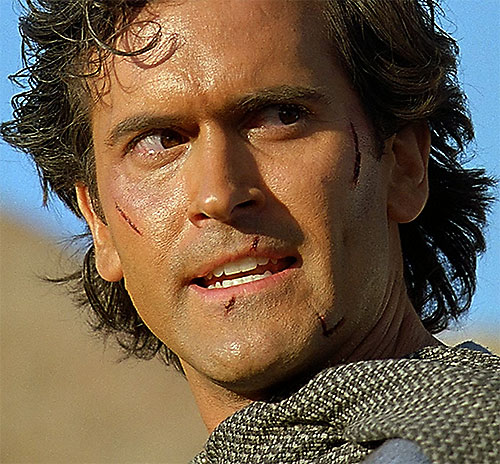 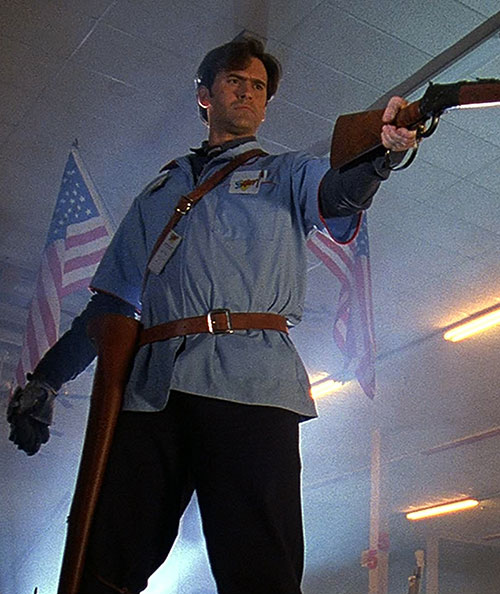