“A voice in the crowd can do more damage than even this storm.”

Evil-Lyn is a witch allied with Skeletor in the 1983-1984 He-man and the Masters of the Universe animated series.

The other villainous warriors often see Evil-Lyn as Skeletor’s second in command.

For more about that, and the Masters of the Universe setting in general, you can read our “base camp” Eternia article.

Evil-Lyn is a potent sorceress. She is endowed with mystic powers as well as knowledge of the arcane.

Evil-Lyn wields a powerful magic wand. She has knowledge of many Eternian artifacts, increasing her powers through their use.

Her go-to attack is an energy bolt hurled at opponents.

One of her favorite tricks is to use her magic to change her form. Then join a crowd and spread rumors.

Only she and Skeletor can command Panthor, Skeletor’s giant panther. 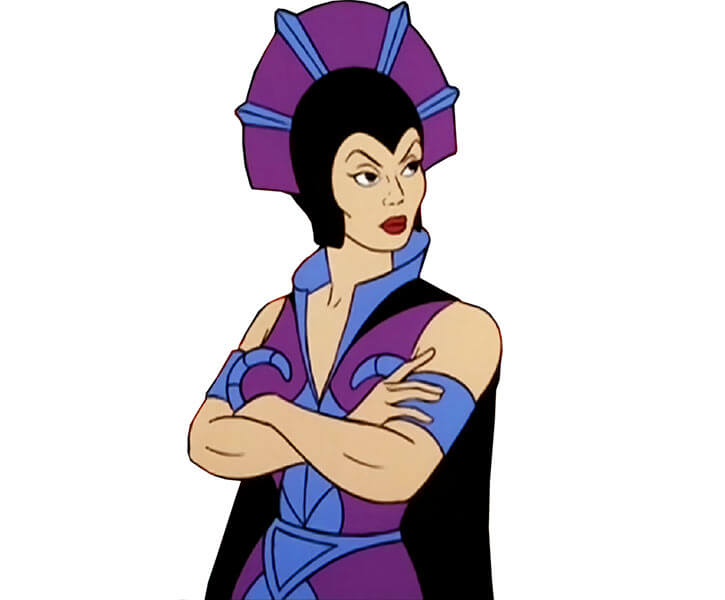 Evil-Lyn is one of the original four warriors summoned to Snake Mountain by Skeletor. She fights alongside Skeletor against He-man and his allies.

She is certainly the most successful of all the Evil Warriors.

She also put together her own plots in attempts to seize power.

Skeletor, Beast-Man, and Mer-Man tried to steal corodite ore from the Widget fortress.

However, He-man arrived in time to foil them.

The direct approach having failed, Evil-Lyn disguised herself as Nadira the peasant girl. She had Panthor chase her towards the fortress. Throwing spears at Panthor, the Widgets “rescued” her.

Once inside, she tricked the gullible Squinch into showing her the corodite. She easily stole it and delivered it to Skeletor.

But the Widgets summoned He-man. The hero defeated the corodite-enhanced Skeletor. 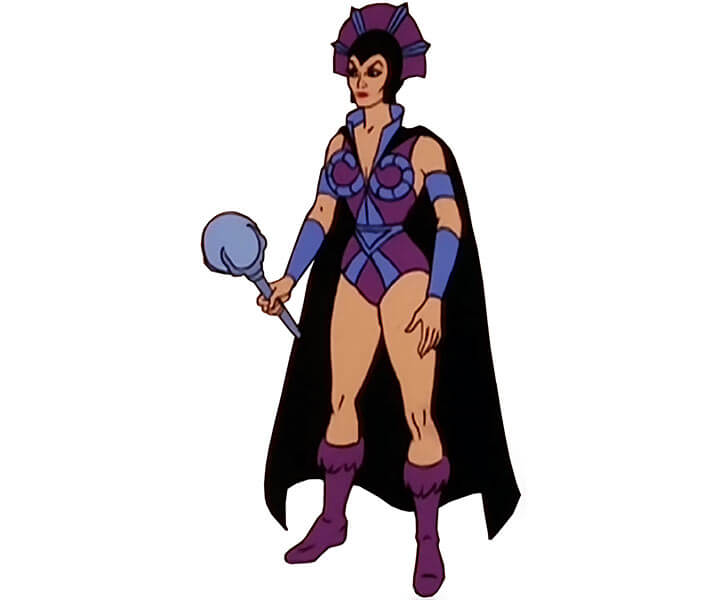 Ordeal in the Dark Lands

With Skeletor away, Evil-Lyn magically tricked Kor the Sorcerer into believing that He-man had kidnapped his daughter. In actuality, Evil-Lyn had sent Tri-Klops to do the kidnapping.

Teela and Orko rescued and returned his daughter. They also exposed Evil-Lyn’s plan, but the Scourge escaped Kor’s control. He-man eventually defeated it.

Mallek, the wizard of Stone Mountain, protected the fountain of life. But he feared that over time, the evil wizard Kothos’ attacks would succeed.

Mallek reached out to his old crush, Teela, and asked for her and He-man’s help.

Kothos did try again. He summoned a special sand-demon. At the same time, Skeletor ordered Evil-Lyn and Clawful to steal the fountain’s water for him.

While Evil-Lyn crept inside the temple, Clawful intercepted He-man.

He-man dispatched both the sand-demon and Clawful. Teela fought Evil-Lyn, whose spell had put Mallek to sleep.

But Kothos’ magic lifted the entire temple off its foundation and flew it away over the desert. He then stole Evil-Lyn’s magic and stranded her and Teela in the desert below.

Evil-Lyn and Teela learned to work together to survive. Evil-Lyn even rescued Teela from a giant Crawler, a Sand-devil. Teela returned the favor when she helped Evil-Lyn sneak back into Kothos’ lair.

Evil-Lyn regained her power and defeated Kothos. She turned his own spell back on him. This transformed him into a sand-slug.

The truce over, Evil-Lyn returned to Snake Mountain.

Kothos, still in the form of a sand-slug, tricked Orko into helping him. Orko undid the transformation spell.

His mind set on revenge, Kothos captured Orko, Adam, Teela, and Cringer. He offered these to Skeletor in exchange for Evil-Lyn.

Skeletor initially refused. But he handed her over when Kothos offered a captured He-man instead.

In a strange turn of events, Evil-Lyn helped He-man escape. He-man promised that he’d in turn rescue her.

He-man rescued Evil-Lyn and she returned unharmed to Snake Mountain. Meanwhile He-man convinced Kothos to use his magic for good.

Evil-Lyn has grown accustomed to defeat. Sometimes, she runs away as soon as any oppositions shows up. Though, unlike the other villainous warriors, she’ll try to get in a parting shot. 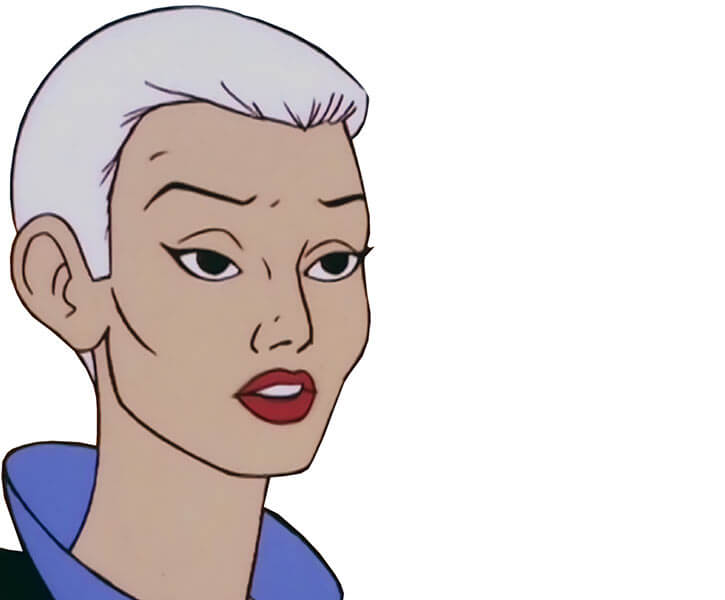 Evil-Lyn has a thin build and keeps her hair trimmed very short.

She wears an open-faced helm.

Her outfit is nearly identical to Teela’s with a different color scheme. A purple and black one-piece and a dark cape.

Her wand has a large crystal ball at one end clutched in a claw. (Those are the best wands — ed.).

Though the Filmation “bible” lists her as White, Evil-Lyn has eyes with epicanthic folds. And her action figures had bright yellow skin.

Golden skin tones inconsistently showed up in the cartoon version, though never as starkly yellow as the figure’s.

Most characters in the cartoon have varying skin colors, from blue to green to orange. In this context, Lyn’s complexion is probably not meant to resemble an Earth skin tone. Especially since her facial features, including the eyes’ shape, are based on Italian actress Sophia Loren (Sofia Scicolone)  . 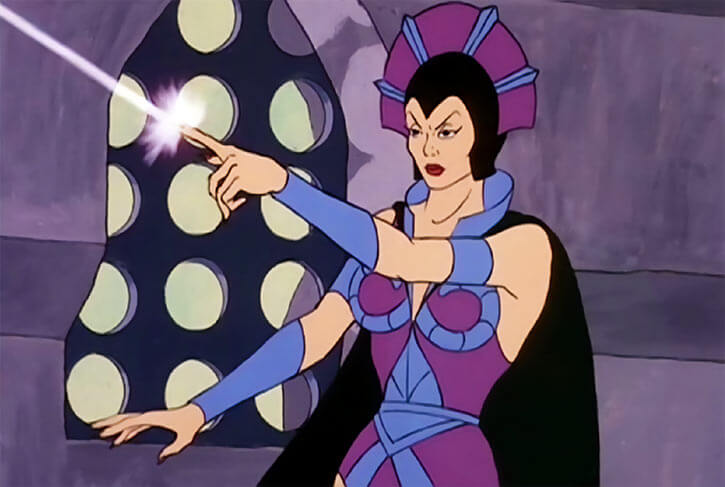 Quick to judge others negatively. Evil-Lyn looks for weakness in others and exploits it.

Power hungry with dreams of universal conquest, she has no issue betraying others.

Early on, like Beast-Man, Evil-Lyn openly challenged Skeletor. She still sees Skeletor as an obstacle to acquiring power for herself.

But later, she had to fall in line to Skeletor’s will. Together Skeletor and Evil-Lyn have proved a formidable team.

Kothos has been a recurring rival.

She worked for other villains, since she’s not as tied to Skeletor as the other warriors. These included Dark Dream (“Eternal Darkness” episode) and King Gorgon (“The Defection” episode). When Skeletor is away, she enacts her own plans.

When outmatched she quickly becomes a coward and begs for mercy. With Skeletor, she is quick to blame others.

“With Skeletor away for a few days, now is the chance to conquer all of Eternia ! For myself !” (give this lady Starscream’s number already — ed.).

King Gorgon: “I’ve asked you here, Evil-Lyn, for there is no sorceress more evil than you.”
Evil-Lyn: “Thank you, King Gorgon.”

(In the desert with Teela. Evil-Lyn had lost her powers. Teela drew her sword.)
Evil-Lyn “We had a truce ! A truce !”
Teela: “You don’t trust anyone do you ?” (Uses her sword to cut a cactus revealing water inside)

“Fortunately, I know all about these beasts. In fact, I’ve studied the habits of every vicious creature on this planet.”

Evil-Lyn: “I was a witness. I turned myself into a peasant girl and told the King I saw the Bright Moon people do the destruction. Hahahaha, and that dope fell for it.”

“He-man is right. We may be enemies but at least he will keep his word.”

My first thought was a comparison of Evil-Lyn to Circe. Although, putting Evil-Lyn alongside Circe’s mythological background doesn’t really fit. The Enchantress (June Moon) would likely be a better choice.

Evil-Lyn can easily fit as a generic mystic villainess. She would try to conquer the Earth. 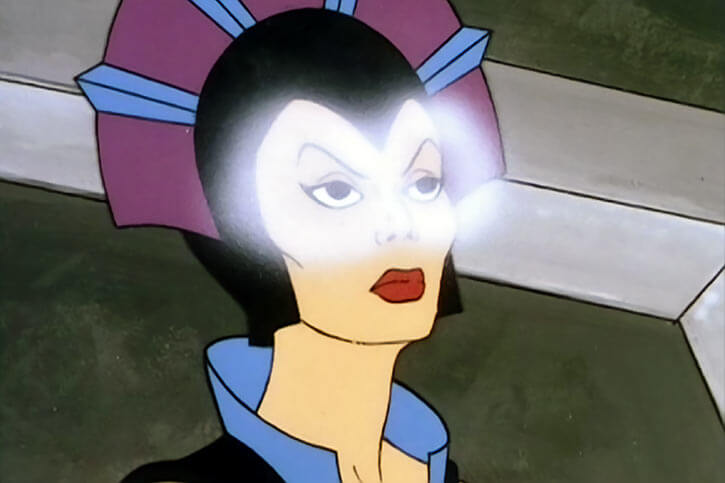 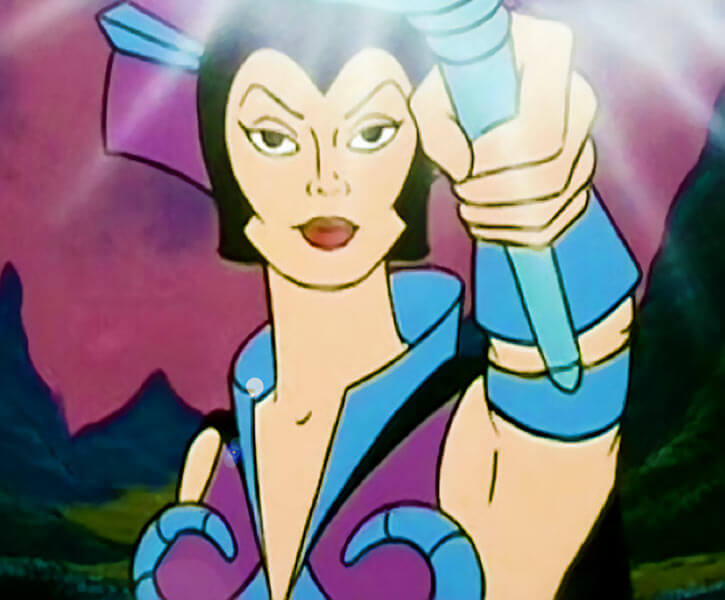 Dark Dream states that Evil-Lyn draws her power from her wand. I doubt this is fact, it’s never referenced again in the series (“Eternal Darkness” episode). Her enemy Kothos didn’t target her wand when he stole her magic (“Witch and the Warrior” episode).

Evil-Lyn isn’t shown using many Rituals. Practically all her spells can be covered by her Sorcery power. When she does use Rituals, they are in conjunction with Skeletor or other evil warriors.

Evil-Lyn’s Ice Wand was presumably only used until she increased her own power higher than the power of the wand.

Evil-Lyn says she has a lab at Snake Mountain, but it is never shown (“Journey to Stone City” episode).

She may have Telepathy. She communicated with the Spell-Stone from several miles away. Then again, she cast a spell over the spell-stone when she first found it. It may have been some kind of linking spell.

One of the many powerful-but-only-briefly-seen artefacts in the series. Here are my notes as an example :

Source of Character: The 1983/1984 animated series He-Man and the Masters of the Universe. Voiced by Linda Gary.

Writeup completed on the 6th of October 2019.